In a Divided Time, a Humanitarian Love Story Unites 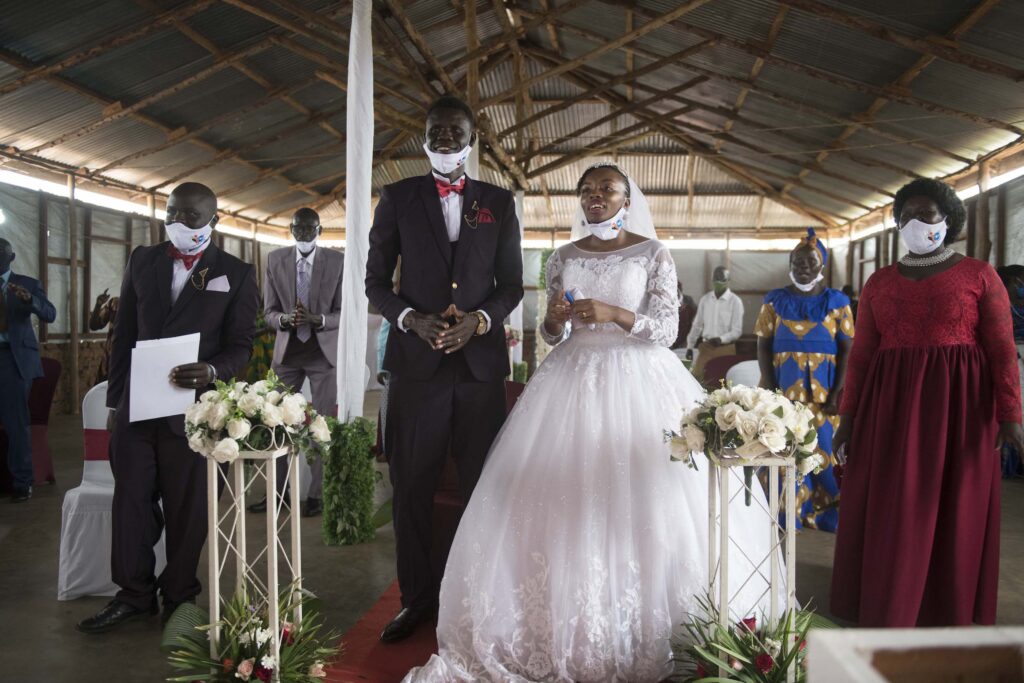 When American Faith Blanchard moved to Uganda to do charity work, she wasn’t expecting to find love. But during her time volunteering at Bidibidi Refugee Settlement, that’s exactly what happened. It was there she met Seme Ludanga, a South Sudanese refugee and United Nations World Food Programme (WFP) Storyteller who changed her world.

The two first met at as facilitators at a youth conference in the refugee settlement.

“The first time I saw him,” Faith said, “my heart jumped out of my chest.”

Seme had a similar reaction. “When I saw her, I felt my heart move in my whole body,” he said. “Even before maybe sharing anything with her, I felt like I knew her a long time ago.” 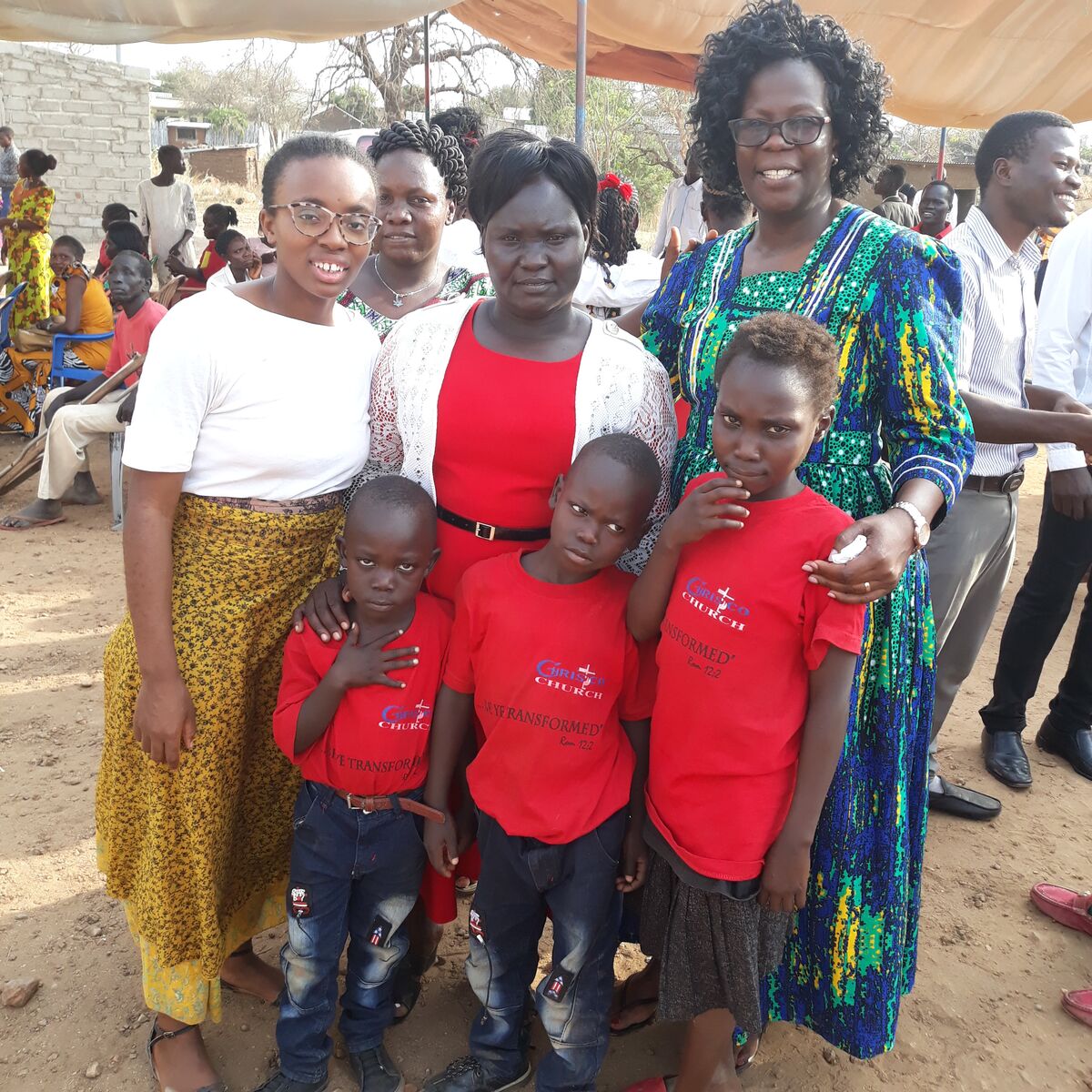 Faith volunteering with children in Uganda.

Seme became Faith’s translator for the conference, but their relationship didn’t end there. Two years later – this past July – Faith and Seme were married. In a time when culture divides, they united in love.

But the path to get there wasn’t all sunshine and roses, especially for Seme, who fled violence in his home country of Sudan. He left alone at age 15 – without family or friends to support his journey. He arrived safely at Bidibidi, where the U.N. World Food Programme provided him with food assistance and supplies. 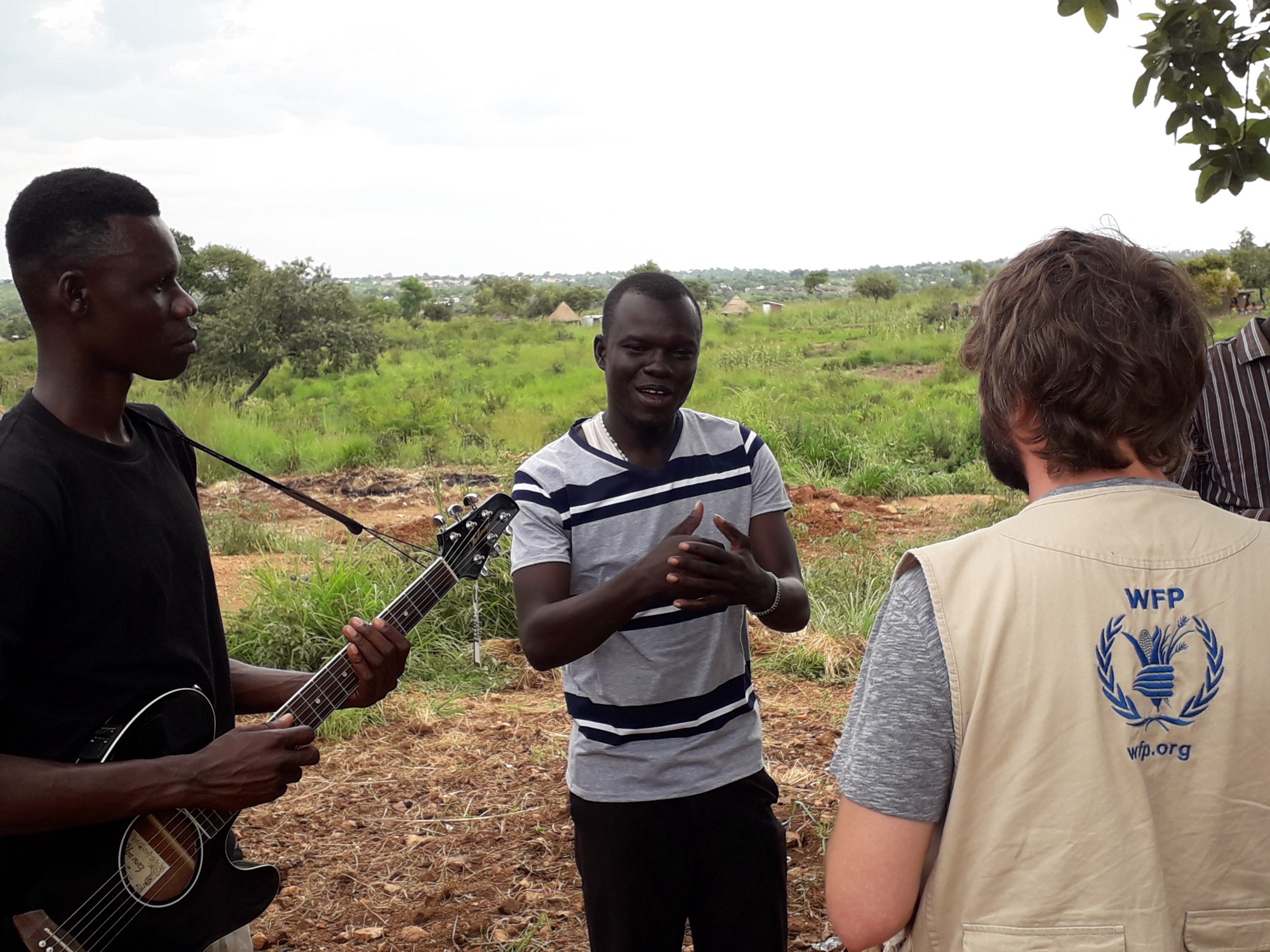 Seme, left, participates in a WFP Storytellers project in 2018.

Upon first arriving at Bidibidi, Seme felt a bit hopeless. But after a while, he decided that he was there to make a difference. He started volunteering with youth and became a U.N. World Food Programme Storyteller, sharing his experience as a refugee with the outside world. And that’s what led him to be in the same place at the same time as Faith, a woman also looking to serve others and make a difference. 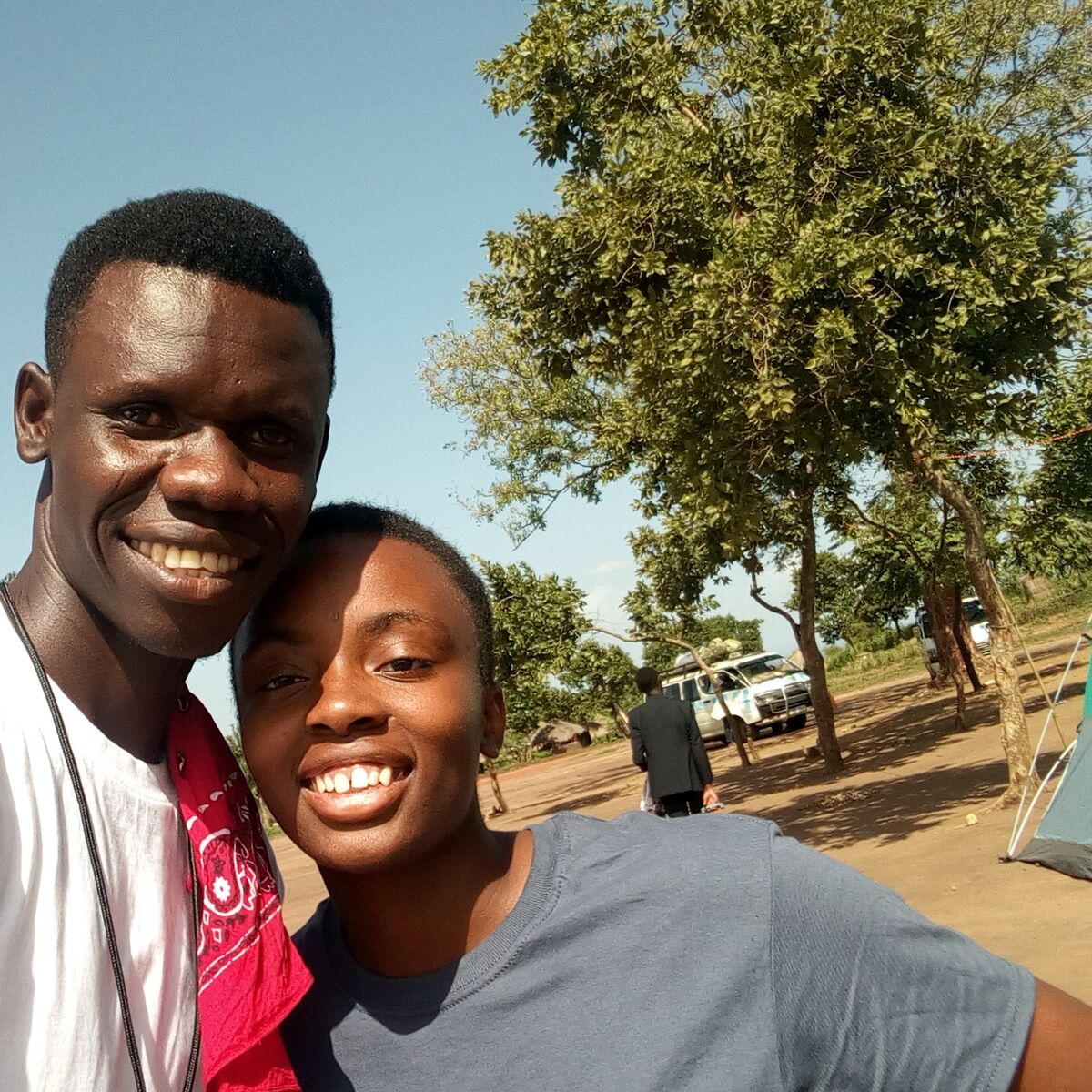 Faith and Seme before before getting married.

“In the beginning, I had so many doubts,” Faith said. “We are from completely different places, the idea of moving to another country and continent, leaving my family. I was not sure if I was strong enough to endure the sadness and difficulties of an international marriage. But after praying and thinking about it, my heart settled. When he proposed, I cried tears of joy for three days.” 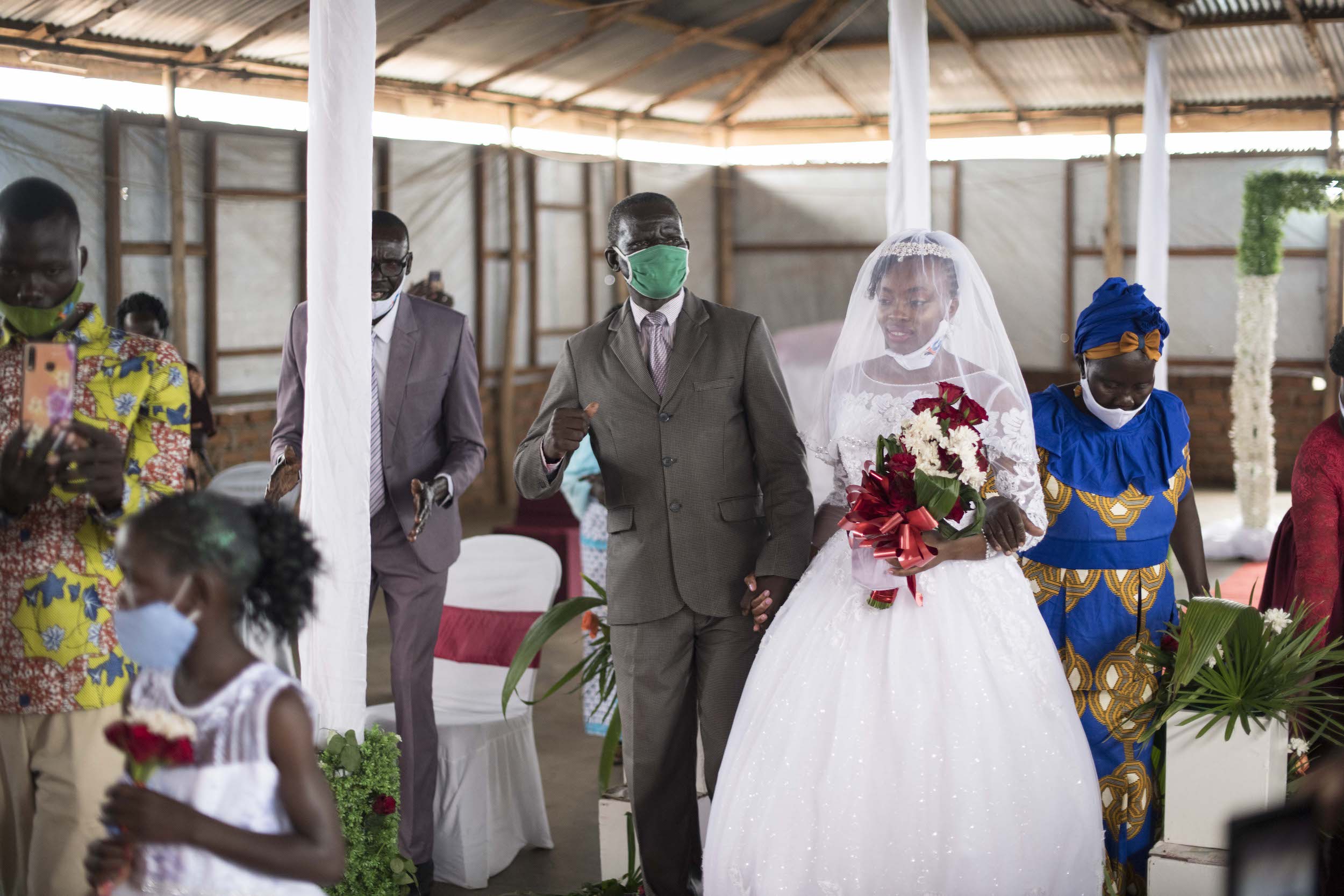 Their pastor walking Faith down the aisle on her wedding day.

The wedding was held in Uganda on July 25. Faith’s parents were unable to make the ceremony because of the pandemic, so a Ugandan pastor and South Sudanese friend walked her down the aisle while her parents watched via Facebook livestream. Faith and Seme want to stay in Bidibidi and are currently looking to build a house there. 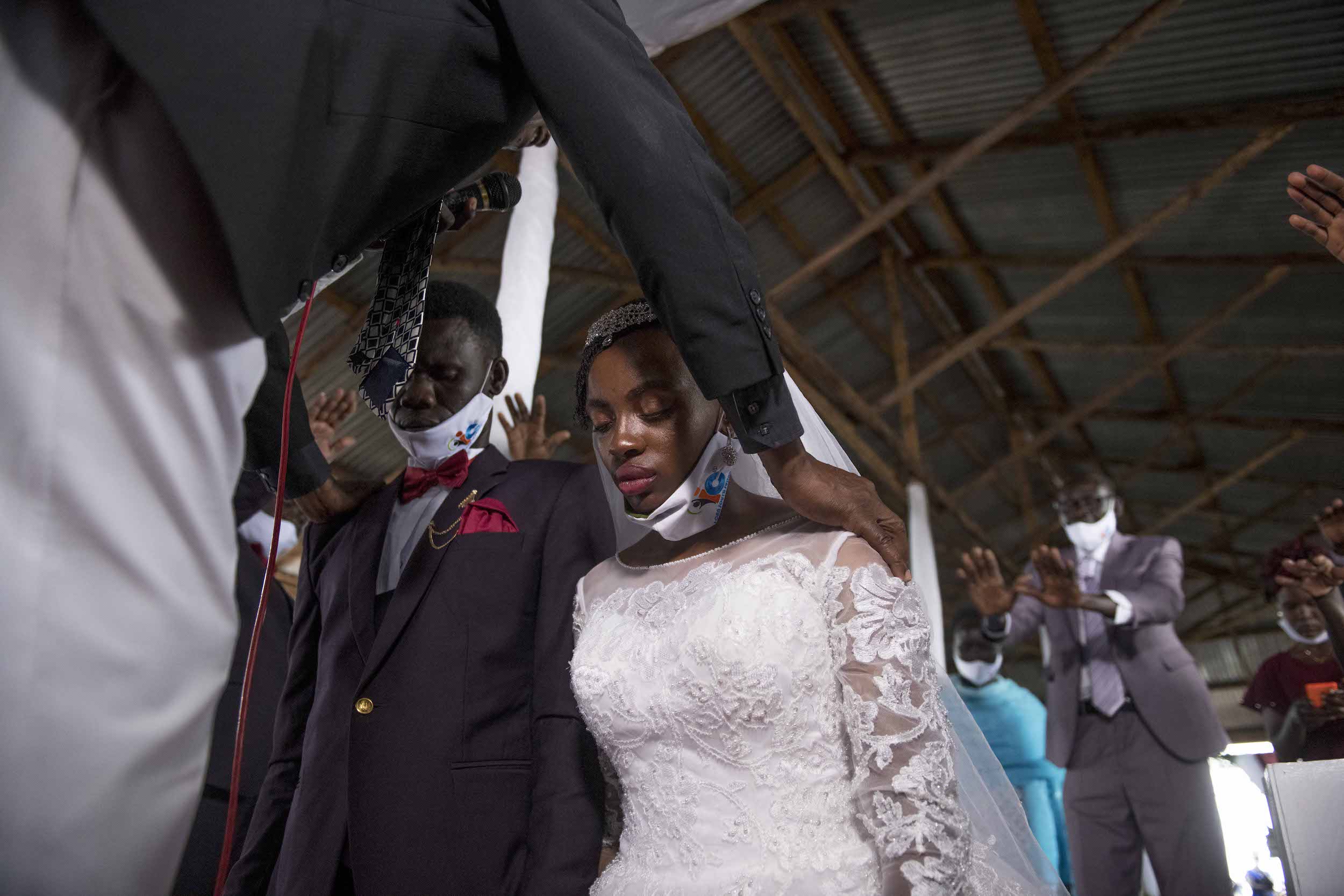 Faith and Seme kneeling for their wedding blessing.

When asked if she might miss the luxuries of American life, Faith said, “In the U.S., we’re surrounded by such material wealth that it masks the other kinds of poverty we have. In Uganda, we will not have many possessions, but the richness of our life will include a strong sense of community, family and belonging.

“I am so happy to be married to Seme,” Faith continued. “He is a sweet gift to me. He is my best friend, and I love the woman I am with him. I can’t ask for a better life than that.”

While Seme and Faith found their happy ending, millions of people who fled violence, persecution and war still struggle daily to survive. Learn more about displacement and hunger and how you can help.

Location:Uganda
Special Interests:Displacement
Share this story
<< Read the previous story: Building on a Legacy, Siblings Sell Face Masks From Zambia to Support Hunger Relief
Read the next story: How Happy and Her Baby Got Healthy: a Little Food, a Garden and a $22 Loan >>
Explore About Us WFP's Work U.S. Policy Blog Podcast
Get Involved Start a Fundraiser Be a ZeroHunger Hero SharetheMeal App Corporate Partnerships Foundations
Donate
Continue to wfpusa.org

2X match in effect. Please give while it lasts.

Donate Now
Continue to wfpusa.org
Photo: WFP/Marco Frattini
It looks like you're outside of the United States.