I’m taking the opportunity of a quiet moment—a pause between Kitenga, Tanzania and Mfuwe, Zambia—to put a few thoughts together about my last two weeks here in Tanzania.

I’m sitting at a rooftop restaurant above the small hotel where I am staying in Dar es Salaam, about a five-minute walk from the Indian Ocean. ‘Dar’ changes every time you blink. It’s growing rapidly, accumulating both wealth and population without corresponding infrastructure. It’s change in motion and signs of new affluence and continuing poverty abound.

Very different from where I have just been!

I have recently been based in Musoma, at the Sisters headquarters. Across the country and on the shores of Lake Victoria, it is a large town that has probably been plucking tilapia from the lake for hundreds of years. While I could go on and on about Dar and Musoma, your interest—as is mine—is really the place about 1 ½ hrs north east of Musoma: Kitenga, a small village in the northwest corner of the country where we are working steadily to open a new school in early 2015.

I am very happy to report that “Kitenga is on the move,” as our slogan goes. The long-term vision and herculean effort by the Sisters and their partners is finally being matched with comparable action. Not only has there been progress on the dorm, teachers’ houses and classroom since I was there in April, but the big, big news is that Girls Education Collaborative sealed the deal with our builder of choice for the Alice Kryzan Memorial Library and the Science Center. And both are now underway!

For the secondary school’s phase-one opening, certain infrastructure has to be completed for doors to open: classrooms (one set already finished); dormitory (under way); teachers’ houses (as there is no other place for the required 8 teachers to live); latrines for the classrooms; library and science center.

How has Girls Education Collaborative been a part of this? We are the largest funder of the dormitory and sole funder of the library and science center. The Sisters have had other generous and committed partners as well, including Aid Africa’s Children, Solar Liberty Foundation and Buffalo Tanzania Education Project.

This has actually been a very anxious time as the clock has been ticking on a timeline to open the school for the next school year—in Tanzania, school starts in January! Our builder, Immanuel, and his team set up temporary housing in Kitenga and within the first two days, they had located construction sand and cement, which is no easy task. It’s been fascinating to learn the in’s and out’s of what it takes to build housing where there is no power, running water or paved roads. I think it is fair to say that calling it challenging is an understatement.

The announcement, however, that truly took the Sisters’ breath away, was that we were ready to start construction on the Science Center. Below is a picture of Sister Flavia when I shared the news! 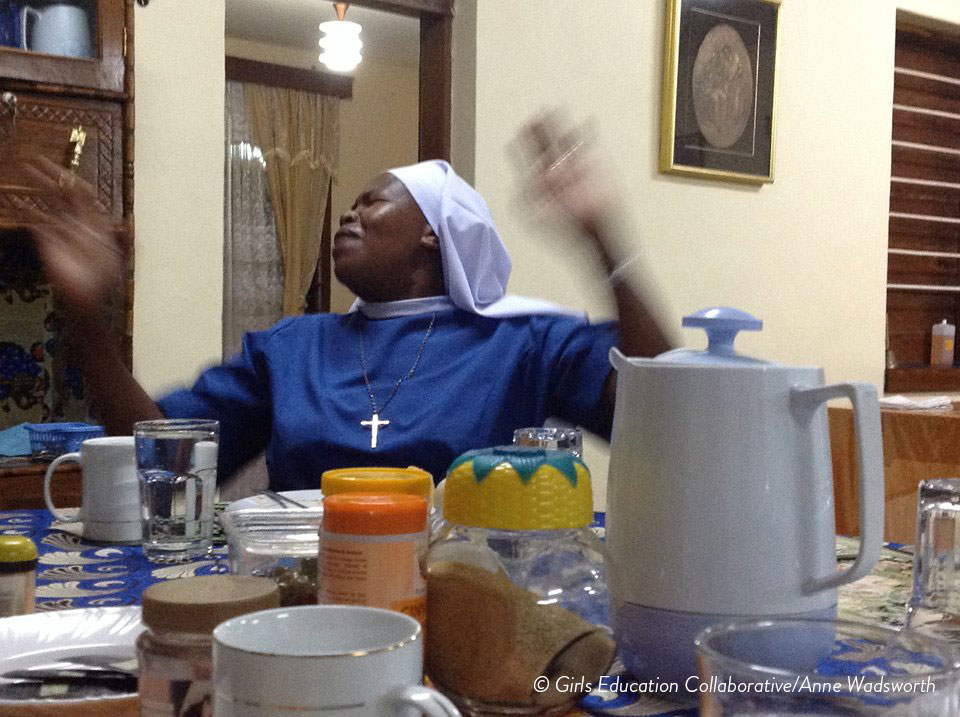 With these two critical buildings now underway, the Sisters went into action on the next level of steps that need to be taken for a school to take life: from design and colors for school uniforms to securing bunk beds and beakers! There is a big ‘to-do’ list, but they have added more Sister-power to the Kitenga Team and I assured them that we would do what we could and that their other partners are ready as well.

There are five exciting months ahead of us now as this final push—a dream in the making for over 20 years—takes shape. My two weeks as project manager have been incredibly informative (going to a river to buy sand, by the way, is much more satisfying then Home Depot), as well as productive. I pause here in Dar to get caught up on some things and tomorrow I fly to Lusaka, Zambia to meet up with colleagues as we develop the girls’ leadership program for Vinza Community School.

Even though the team at WFP USA has not been to Kitenga to see the need firsthand, your organization has opened your hearts to the story that keeps repeating itself for the women and girls of this region and you have responded with action to create action.

Hence, we will, hand in hand with the Sisters, do our very best to build the doors that will open in January so girls can replace their buckets for beakers, their maize bundles for textbooks; their water trips for reading.

Anne Wadsworth is the head of Girls Education Collaborative, a non-profit organization that works with the Immaculate Heart Sisters of Africa to improve girls’ access to education across Africa.