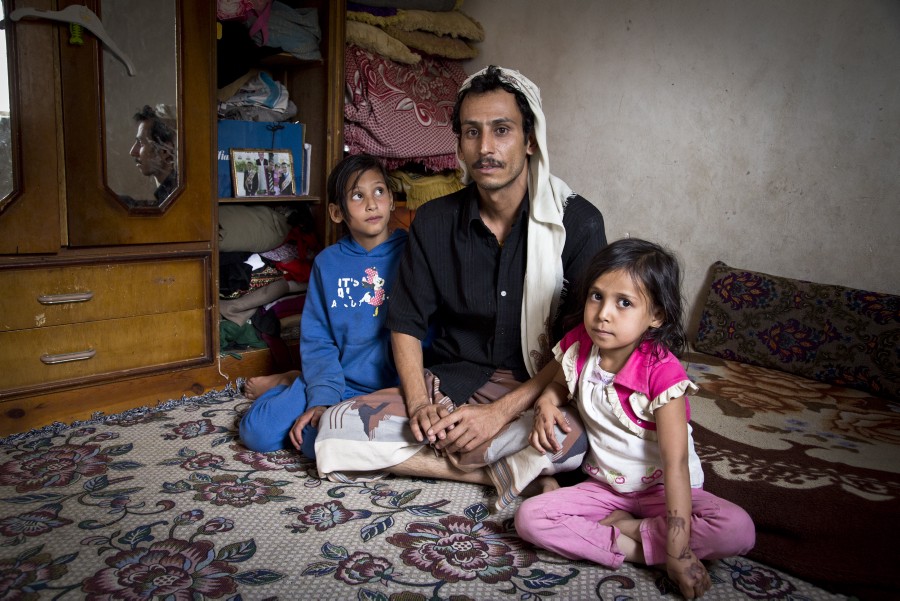 3 Years of War in Yemen

Before the conflict in Yemen broke out in 2015, Walid had studied to become a lawyer in the city of Taiz.

WFP/Marco Frattini
Walid’s oldest daughter, 10-year-old Sondos, looks up at him in awe despite his inability to provide for his family most days.

But the war has put his dreams—and his livelihood as a public employee—on hold. Now relying on an erratic income as a taxi driver, he and his family depend on their monthly food ration from the World Food Programme (WFP) to survive. It is  one of the few certainties in their lives.

“We’ve been through some rough months, we had nothing in the house — no furniture, no food and no money,” he says. “Sometimes I would stay late for work and when I come home…I never wake [the children] up. If I wake them up, they would say they wanted to eat dinner.”

Roughly 22 million people in Yemen require humanitarian assistance like food and medicine, including more than 8 million people who depend on external food assistance to survive. Meanwhile, almost 2 million children between the ages of six months and five years suffer from malnutrition, and 400,000 of these children are severely malnourished.

“It doesn’t matter where you are in the country,” said David Beasley, WFP’s Executive Director. “The stunting rate, the death rate, the starvation rate—it’s just mired with war.”

The cruel milestone corresponds with data from a new global report showing a large increase in the number of people who suffer from severe hunger around the world. Some 124 million people in 51 countries, including Yemen, were affected by severe hunger in 2017—11 million more people than the previous year.

The increase is largely the result of new or intensified conflict and insecurity. Roughly 10 of the 13 major food crises around the world are driven by conflict.

“This [report] shows the magnitude of today’s crises but also shows us that if we bring together political will and today’s technology, we can have a world that’s more peaceful, more stable and where hunger becomes a thing of the past,” Beasley said.

Seven areas of Yemen are experiencing emergency levels of hunger—just one level below famine. While the winter harvest improved access to food in the southern governorate of Hadramaut at the start of the year, more families like Walid’s in other parts of the country like Taiz are borrowing food as fighting has intensified.

WFP’s lifesaving food assistance in Yemen has so far prevented famine. The humanitarian agency is scaling up to reach 7.6 million people each month in 2018. WFP is distributing food in mostly rural areas while supporting ways for families to buy food themselves in urban areas where markets are still functioning.

Since the end of a humanitarian blockade that sent food and fuel prices soaring last year, three WFP-chartered vessels have delivered more than 50,000 metric tons of wheat—sufficient to feed nearly four million people for one month.

WFP will do whatever it takes to help families like Walid’s survive.

Save Lives By Giving Food

Your support helps WFP deliver lifesaving food to the most vulnerable people in conflict zones around the world.