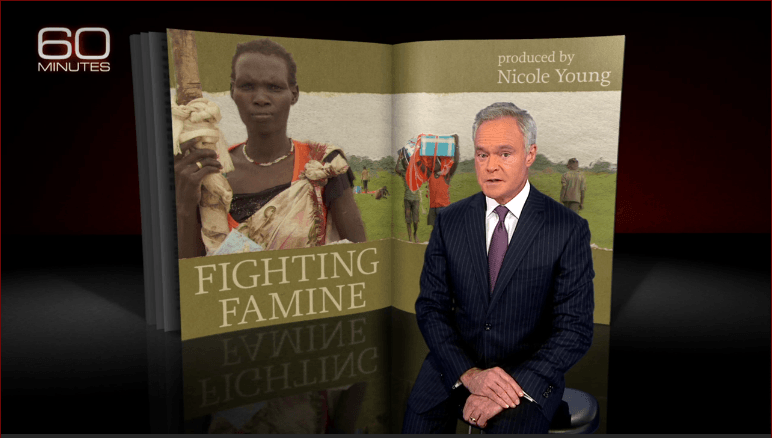 High in the sky, a World Food Programme (WFP) plane soars above a large group of South Sudanese families waiting for food.

At once, 33 tons of food—including emergency rations in bags weighing more than 100 pounds—spiral downward, awaiting retrieval by men to help feed thousands of people who have walked for days seeking relief.

“A rare famine emergency has been declared in the youngest nation on earth,” Pelley says. “Holding off a catastrophe is the mission of the UN’s World Food Programme.”

From a health clinic in South Sudan’s capital Juba, Pelley meets a 7-year-old girl named Josephine and her mother. Josephine weighs 24 pounds, ravaged by hunger and now succumbing to a tuberculosis infection caused by her heightened susceptibility to disease. A pair of twins are examined at a health clinic administered by the International Medical Corps in Juba, South Sudan.

In the same clinic, a pair of malnourished and severely dehydrated twin babies rest on a measuring scale. Both weigh 4.5 pounds and require 2-3 weeks of care, including milk-based nutritional formulas, to regain additional weight. Their bodies have become so weak, solid food could kill them.

It’s a heartbreaking picture in the world’s youngest nation, where WFP is only able to reach roughly 50 percent of the 4.8 million people across the country in need of immediate food assistance due to fighting and one of the world’s most inhospitable terrains—just one paved road outside of Juba and a 6-month rainy season that turns most of the landscape into swamp.

WFP has already completed a first round of emergency food distributions in Leer County for 48,480 people facing acute hunger. WFP will continue to serve populations facing famine in Leer with monthly deliveries for the next three months, including household rations and preventative nutrition assistance.

“Right now, food assistance is the only thing that stands between hundreds of thousands of people and absolute catastrophe,” said WFP’s Shaun Hughes.