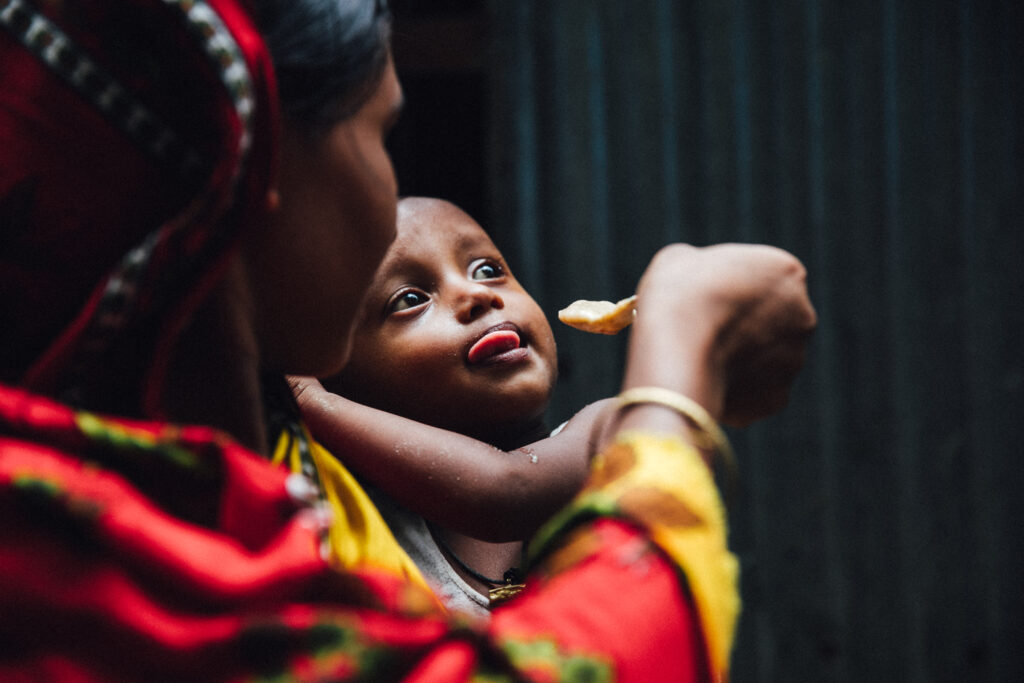 The world’s hungry are people of all ages: Infants whose malnourished mothers can’t produce enough milk. The elderly with no one to care for them. Orphans of AIDS. People suffering from preventable diseases like cholera and dysentery. Families driven from their homes by war and natural disaster. Above all, the world’s hungry are women, children and communities in rural, underdeveloped regions.

As the largest humanitarian agency fighting hunger, the U.N. World Food Programme (WFP) is reaching all of these groups with lifesaving food assistance. What type of food depends on the specific nutritional needs of each group, as well as where and how they live.

In fact, there are a number of factors that determine which kind of food assistance WFP provides a family or community, including:

Syrian refugees in Lebanon, for example, receive electronic food cards from WFP because markets are functioning and locally grown food is available. Struggling farmers in drought-stricken Ethiopia, on the other hand, are getting traditional food commodities like sorghum or wheat flour because local food production has plummeted. 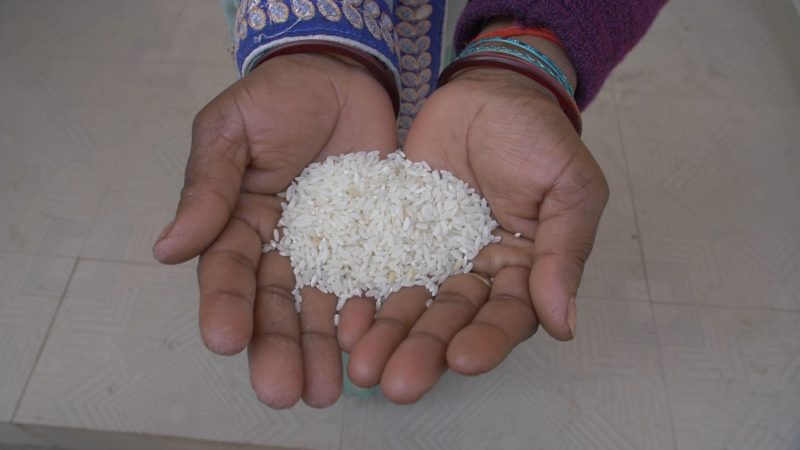 A cook holds rice fortified with vitamins and minerals – like iron, zinc and vitamin A.

But solving hunger isn’t just about providing enough food to eat. It’s about delivering the right kind of nutrients at the right time. A pregnant woman’s dietary needs will differ from those of a grown man or a growing toddler.

And because hunger comes in several forms, WFP must make sure its food assistance addresses each specific type of hunger, whether it’s undernourishment, malnutrition or wasting. One child might require a diet of more calories while another may need meals that contain a specific vitamin or mineral. In Bangladesh, for instance, Vitamin A deficiency is the leading cause of preventable blindness in children.

Below is a look at the many different foods that WFP delivers to feed to the world’s hungry: 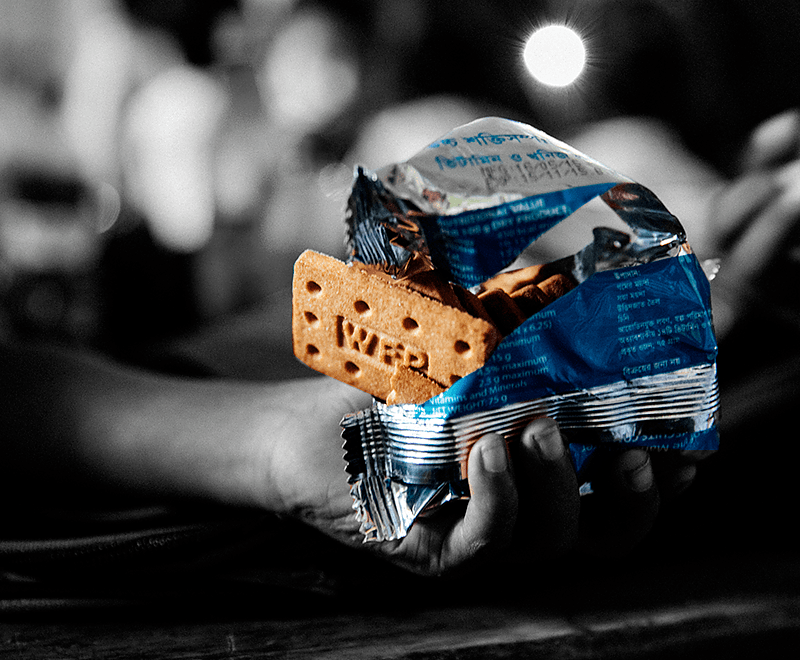 In the first days and weeks after crisis strikes, cooking facilities and clean water are often scarce. That’s why WFP’s High-Energy Biscuits — which don’t require any preparation to be consumed — are a lifesaver to survivors of natural disaster and conflict. They’re also provided as school snacks in countries like Bangladesh.

Each package of biscuits contains high-protein cereals, micronutrients and vegetable fat. And because they’re pre-packaged and boast a high energy-to-weight ratio, they’re easy to transport long distances by land, air or sea.

In 2014, WFP shipped its first “biscuit-factory-in-a-box” from its headquarters in Italy to Afghanistan in seven containers. Today, the factory is churning out nutrient-rich biscuits for Afghanistan’s most vulnerable families while giving local farmers, millers and businessmen a chance of a brighter economic future. 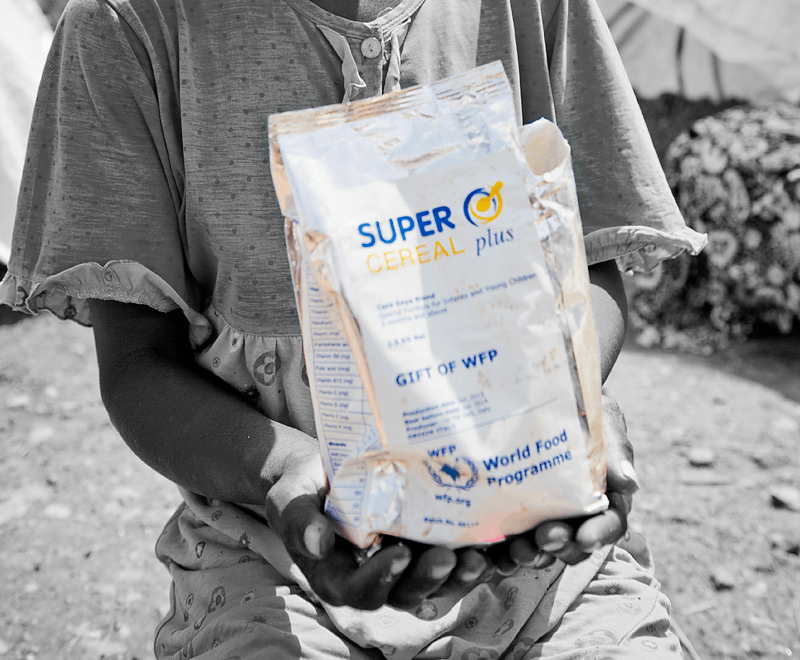 Fortified blends are mixtures of partially precooked and milled cereals, soya and beans that have been infused with micronutrients for additional health benefits. Special formulations may contain vegetable oil or milk powder. Corn Soya Blend — the main blended food distributed by WFP — is cooked with water to create a warm, nourishing porridge.

WFP employs these blends in a variety of scenarios: To provide protein supplements; as part of the agency’s school meals program; to prevent and address nutritional deficiencies, especially among mothers and children; and to provide extra micronutrients to complement its general rations. In the town of Chalinze in Tanzania, students are receiving nutritious porridges as part of WFP’s national school meals program. 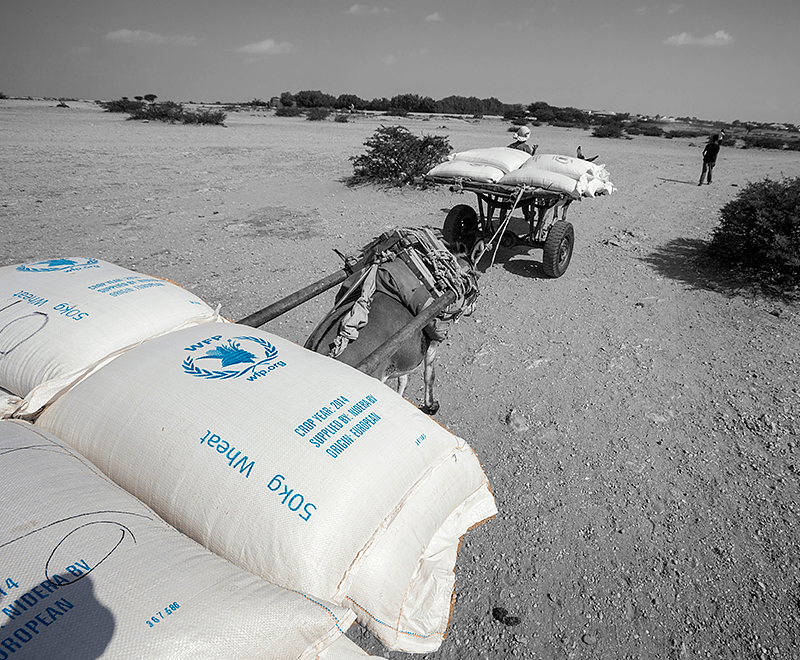 A sack of grain stamped with WFP’s logo remains one of the most iconic images of the agency’s work feeding families across the planet.

Shipped from ports across the globe, these grains include staple commodities like wheat, corn, rice and sorghum. Rich in Vitamin A, B6, C and iron, grains like these also provide calories to keep people healthy and strong.

Last year alone WFP shipped 7 billion tons of food to hungry families in more than 80 countries across the globe — much of that cargo included grains. 81% of this food assistance was procured in low-income countries. By levering its power as one of the world’s largest food buyers, WFP is providing a reliable market for struggling farmers, especially smallholder farmers whose small plots of land depend almost exclusively on family labor. 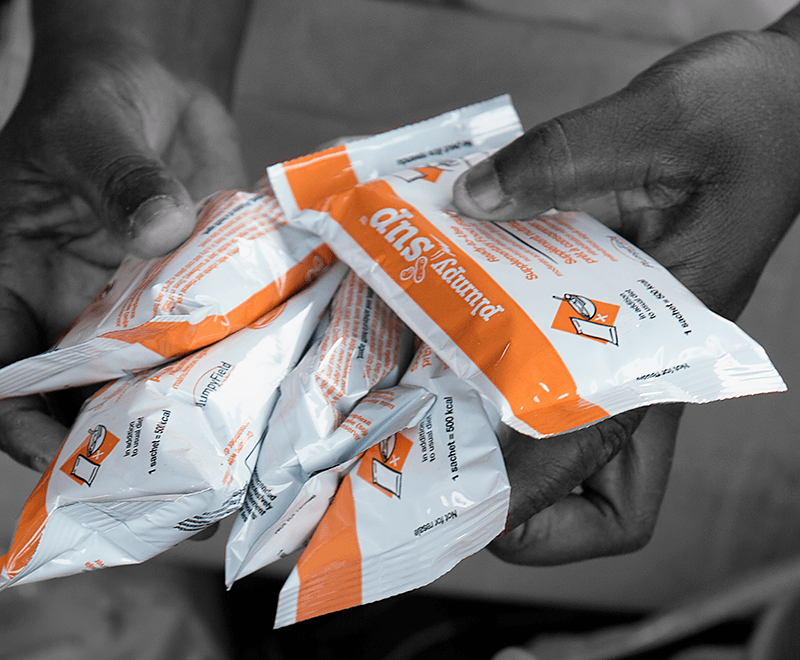 This type of food is typically used to treat moderate acute malnutrition among children between the ages of 6 months and five years old, which is why it’s sometimes referred to as a “therapeutic” food.

These products don’t require heat or water to cook, which make them accessible for impoverished families who often lack access to running water or electricity. And because they’re oil-based and low in moisture, these foods aren’t prone to bacterial contamination, thus giving them a long shelf life. In Yemen, WFP is providing products like these to pregnant women and babies who have been affected by the ongoing violence.

A peanut-based paste called Plumpy’Sup is among the most well-known ready-to-use products. Developed by a French food scientist in 1997, Plumpy’Sup has helped revolutionize the way doctors treat acute malnutrition among children. Where once doctors administered nutrients intravenously — which had a meager success rate, prohibitive cost and required inpatient care — hospitals and clinics can now provide outpatient care with ready-to-use foods supplied by WFP.

“Plumpy’Sup hits the top needs of malnourished people: calories, high-quality protein, and a mix of minerals and vitamins,” one WFP nutrition adviser told NPR. “Plus, it’s sweet, so kids will eat it.” 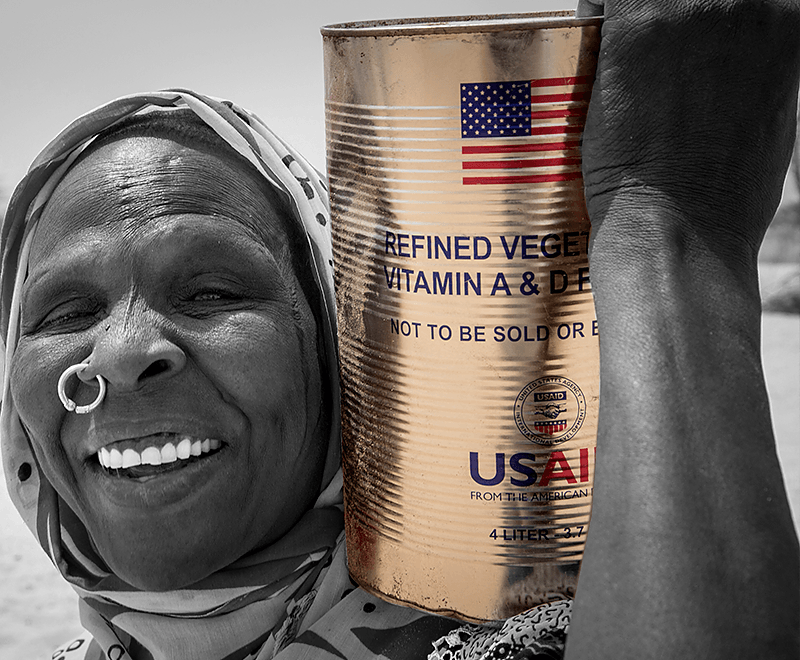 Often part of the staple food basket provided to a general population, oil and salt are not just used to assist with cooking and taste. WFP fortifies its vegetable oil with fat-soluble micronutrients like vitamins A, D, E, and K to boost nutritional intake.

Last year in South Sudan, WFP airdropped vegetable oil for the first time using a plane flying just 650 feet above the ground. This method reduces the need for more expensive options like helicopter airlifts and is expected to save millions of dollars a year.

The agency’s salt contains iodine, a key micronutrient that enables the body’s thyroid to produce hormones. Iodine deficiency affects 780 million people worldwide. Each year, an estimated 20 million children are born mentally impaired because their mothers did not consume enough iodine during pregnancy. 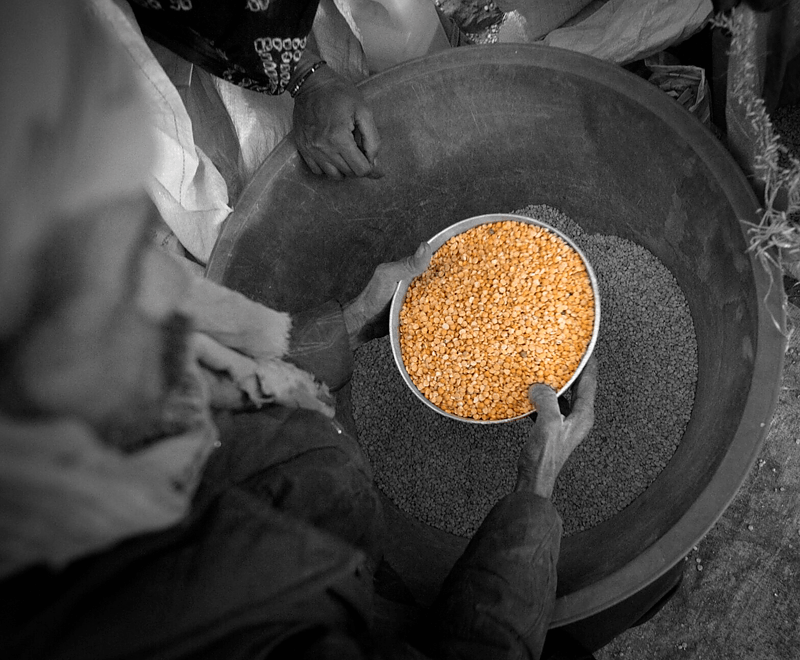 Beans are high in vitamins and minerals like fiber, iron, B vitamins and folate. In developing countries, beans are often the most affordable and accessible source of protein. Typically, beans contain about twice the amount of protein found in whole grain cereals like wheat, oats and barley.

When properly stored, beans can stay edible for several years, making them a smart solution for households that lack refrigeration. 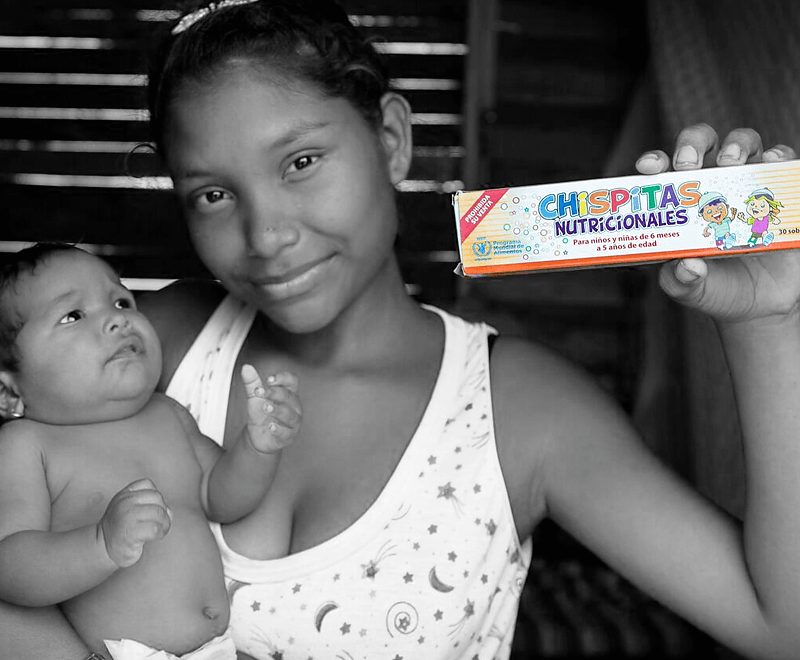 These tasteless powders are part of WFP’s “home fortification” approach to delivering vital nutrition. Home fortification means that families can sprinkle small sachets of the powder — which contain the recommended daily intake of 16 vitamins and minerals — onto food after it’s cooked, turning any dish into a nutritious powerhouse. Hence their nickname: “Magic sprinkles.”

WFP recently launched several pilot projects with the Dutch life sciences company DSM to explore the use of micronutrient powders in three different countries and contexts: Refugees in Nepal, cyclone victims in Bangladesh and refugees in Kenya.

WFP’s snack bars are provided to families in the aftermath of a natural disaster or crisis when local food is unavailable or can’t be distributed. The number of bars that should be eaten depends on one’s age, gender, weight and physical activity.

In Syria, WFP just started locally producing date bars for its school meals program. By using dates grown in Syria and employing Syrians to work in its factories, the agency is providing nutrition as well as economic opportunity for the country’s most vulnerable communities.