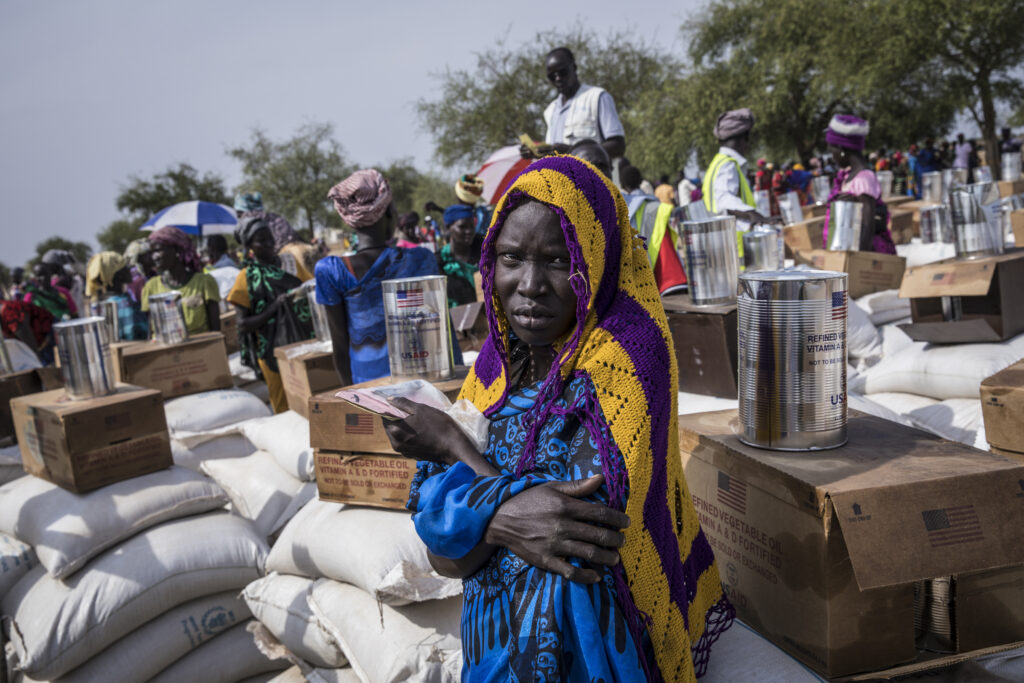 Memories of the 2011 birth of the world’s youngest nation are still present in the hearts and minds of South Sudanese citizens. But independence celebrations were short lived as the country slid swiftly back into conflict only two years later.

Fighting and vicious human rights abuses make the humanitarian response complex. Despite a revitalized peace process this year, lasting peace and stability are yet to be seen across South Sudan.

Humanitarian organizations like the United Nations World Food Programme (WFP) still face a deadly array of constraints in delivering assistance to the 5.1 million people  who need it. Humanitarian workers must contend with a long list of threats including abductions, looting, harassment, illegal checkpoints, bureaucratic impediments and – when the worst comes to the worst – relocation of personnel due to fighting. 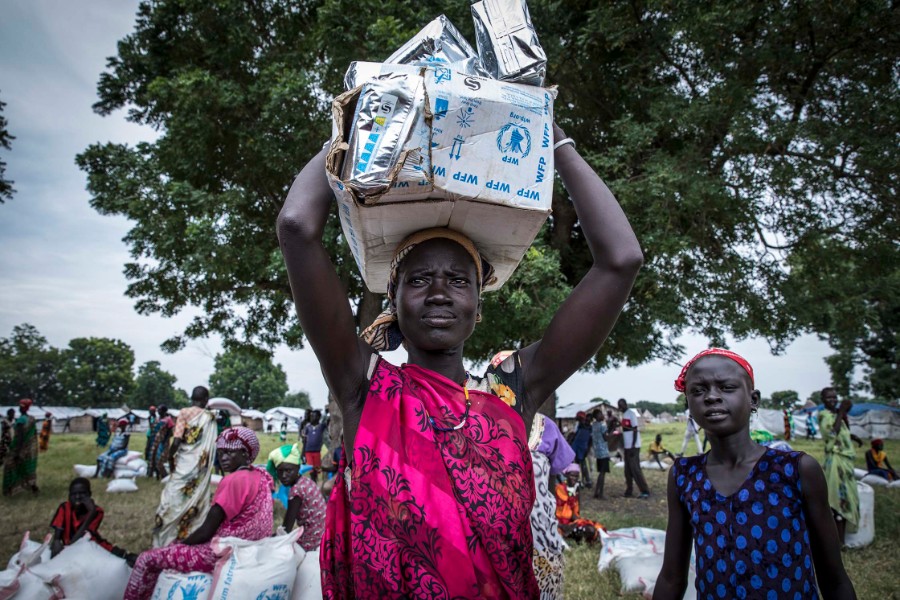 WFP is using one barge and 11 boats to deliver food up the Sobat river – a water-way off the River Nile – to deliver food to hungry people who are otherwise inaccessible by road.

So how did WFP manage to deliver 705,000 pounds of food to 5 million people and supply and distribute $29 million in cash for food assistance in 2018?

The key is securing humanitarian access from the warring sides — sometimes a devilish puzzle — so people in need of assistance don’t lose their lives too.

Known as the Access Unit, the team in South Sudan is the first of its kind in WFP. Specialists facilitate humanitarian access and work to preserve and expand humanitarian space in support of WFP and its partners’ operations, even under the most difficult circumstances. It’s a tough act in South Sudan.

In their prefabricated, busy office, walls are emblazoned with maps and the mission plan. Constant ringing from mobile and satellite phones add to the noise. Camping gear and boots are strewn around the room, testament to a life on the move. 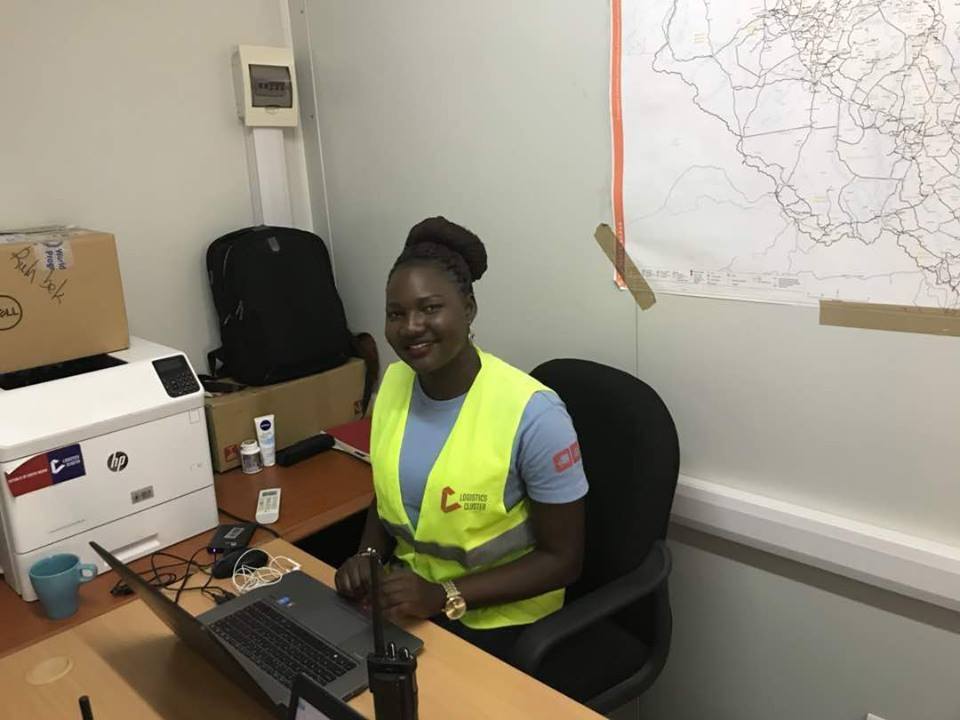 The bulk of the team’s work — whether in the field or in the office — revolves around engagement with all stakeholders. This includes notifying authorities of movements of staff and food, negotiating for safe passage at road and river checkpoints and monitoring the situation in areas of concern. A normal day is impossible with ad hoc negotiations and troubleshooting kicking in any time.

“Continued delivery of food requires daily efforts,” says Lara Atanasijevic, WFP’s Access Officer in South Sudan. “This includes identifying risks and obstacles and devising strategies to overcome them together with other strategic units such as Security, Emergency and Logistics.” But that’s not all. 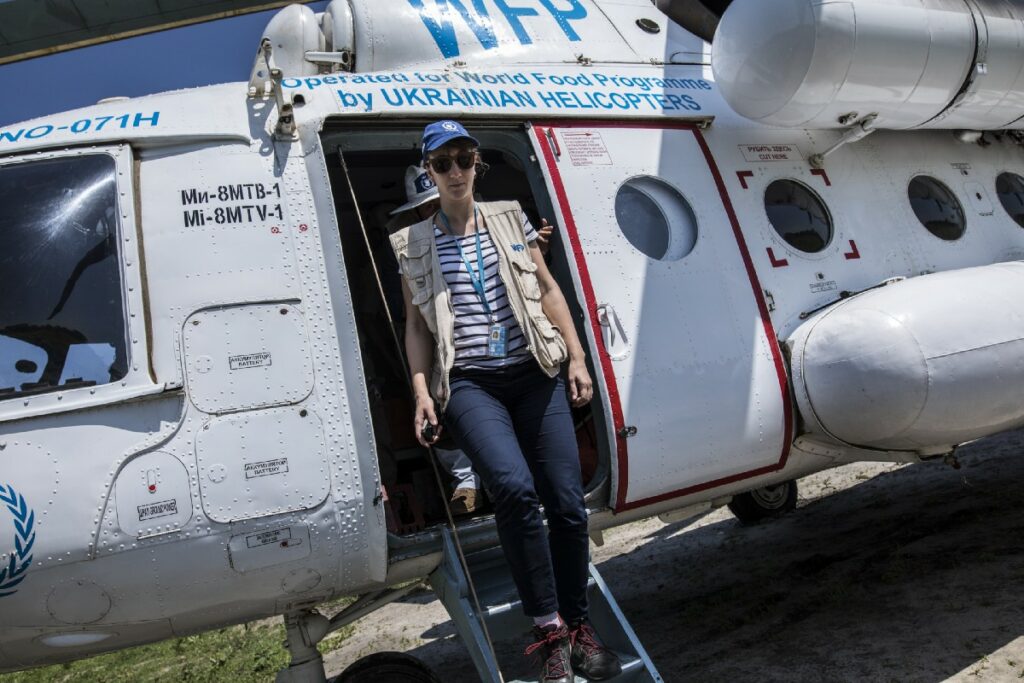 “Negotiations should not be seen as linear,” Atanasijevic adds. “They are much more a continuous process, based on the relationships built up over time.”

Statistics from the UN Office for the Coordination of Humanitarian Affairs paint a grim picture:

But it’s not all doom and gloom and progress can still be made on the ground.

“Insecurity in pockets of the country continues to prevent humanitarian organizations from reaching people in need,” says Ronald Sibanda, WFP Country Director in South Sudan. “However, we remain optimistic that increased dialogue among all parties will help further enhance access and allow humanitarian actors space to reach the most vulnerable.” 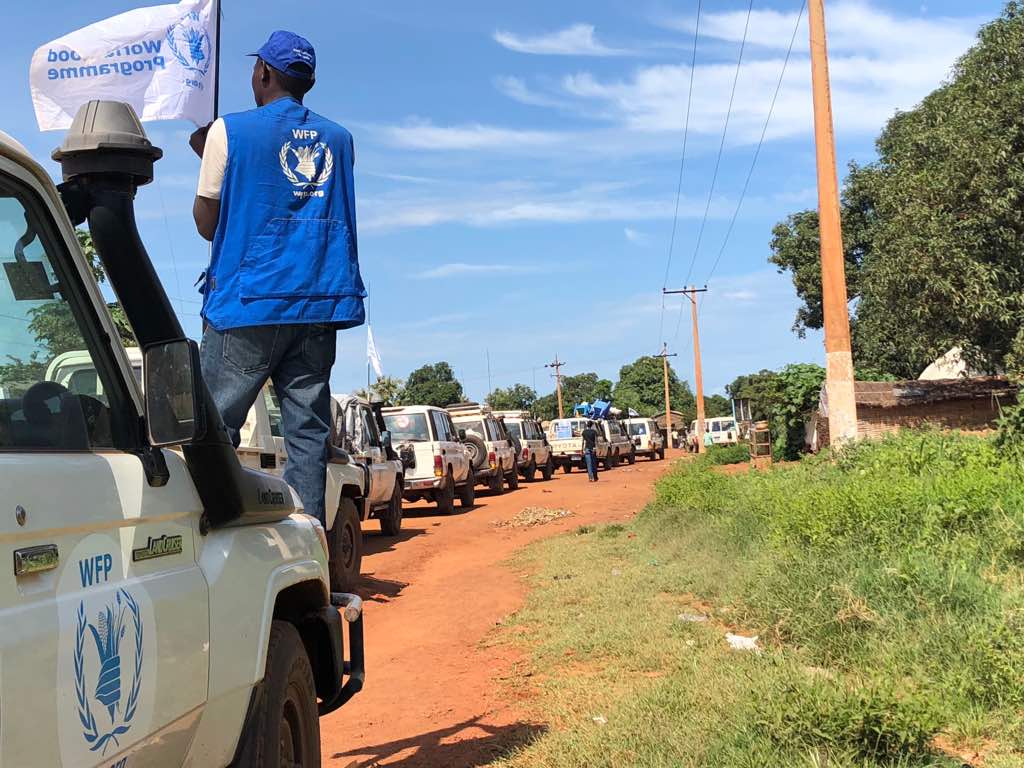 A truck convoy reaches people previously cut off from humanitarian assistance in the region of Baggari, South Sudan.

In mid-2018, WFP cleared the way for a multi-sector response in conflict-affected counties of Central Unity State, an area where famine was declared the year before. Continuous and strategic engagement of all parties to the conflict were key to building support to allow humanitarian assistance in and expand humanitarian space.

A large part of the negotiation was to promote respect for the humanitarian principles of humanity, neutrality, impartiality and independence.

This window allowed WFP and its partners to reach 170,000 people with 1,600 tons of specialized nutritious food and other supplies. 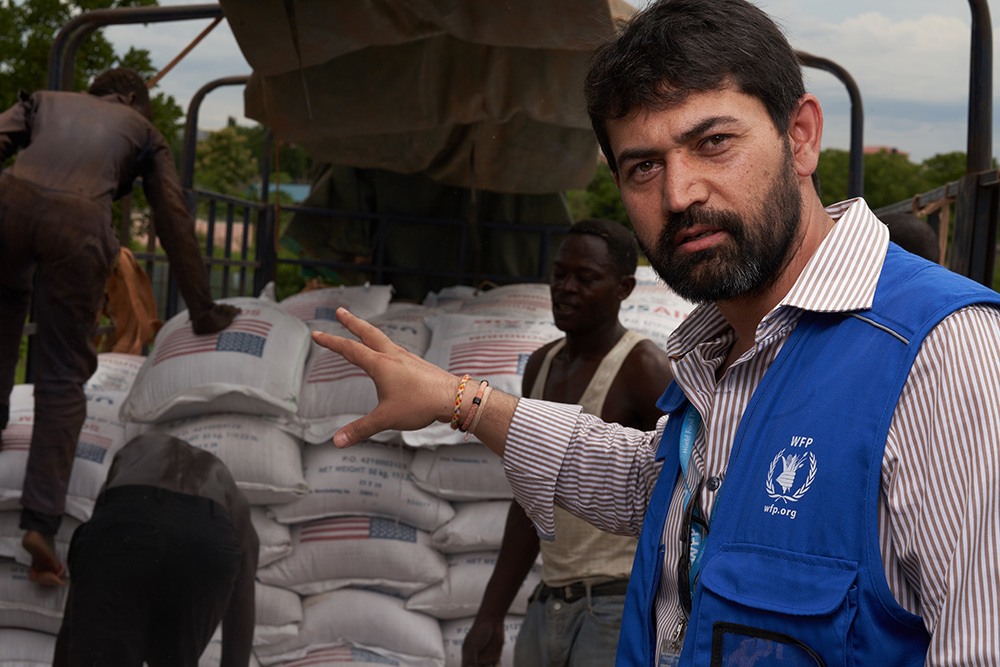 Adham Effendi, WFP’s head of logistics in South Sudan, oversees food being transferred from trucks arriving in Juba from outside South Sudan to trucks transporting the food to various locations inside the country.

A service for all

While food insecurity is a major part of the South Sudan crisis, WFP’s Access team also plays a key role in negotiating and securing access on behalf of the entire humanitarian community, allowing others to provide complementary assistance.

As insecurity deepened in Baggari, southwest of Wau, it took WFP months to negotiate humanitarian access with state and local authorities to obtain permits and ensure the safety of aid workers and cargo given the unpredictable nature of the conflict. Baggari’s remoteness, coupled with the rainy season, made it harder to reach communities in need of assistance.

Once access was granted, WFP led a 14-truck convoy that brought 40 aid workers from 11 organizations into the area to provide assistance. The lack of security and safety guarantees for aid workers had left 28,000 people in the region in dire need of humanitarian assistance.

The team was also part of rescue missions. It had a leading role in 2017 and 2018 negotiating for the release of 40 aid workers from other organizations.

The Access team has been pivotal to WFP’s transition from costly airdrops to increased use of surface transport. The team spent months sensitizing local authorities and communities about the humanitarian principles and negotiating for the safe passage of vessels. This process included field missions by river and road, countless meetings with local and state authorities controlling routes, and some elaborate discussions with communities. The team is not one to shy away from such challenges.

For the first time since the start of the civil war in December 2013, WFP in October 2018 negotiated the opening of river corridors through Ulang, Ayod and Fangak counties on the Sobat and Zaraf rivers, major tributaries of the White Nile, for use by barges and boats loaded with food assistance. 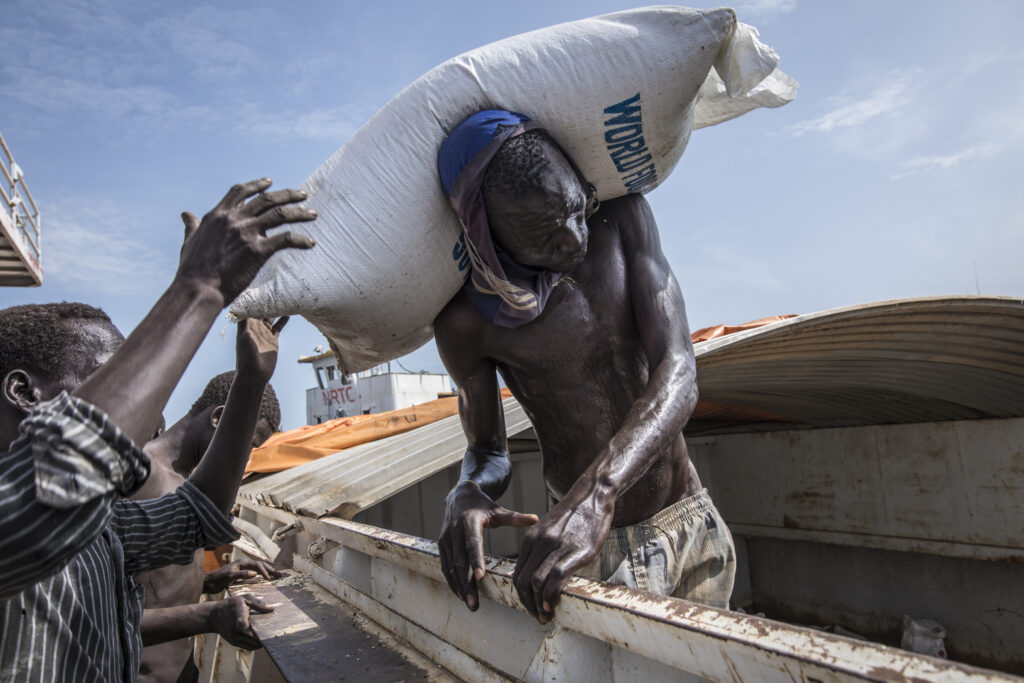 Each barge carries a minimum of 1,100 tons of food and is six times cheaper than an airdrop.

In addition, most parts of the previously hard-to-reach areas in Unity, Jonglei and Upper Nile are now reachable by road, significantly cutting costs. This has led to more commercial transport using the routes and the emergence of local markets, as communities that had been separated by years of war were reunited.

Despite numerous challenges, WFP reached over 5 million South Sudanese people with assistance in 2018. And, as the country emerges from war, the work to open up more areas will continue.

This story was written by Tomson Phiri and originally appeared on WFP’s Insights.