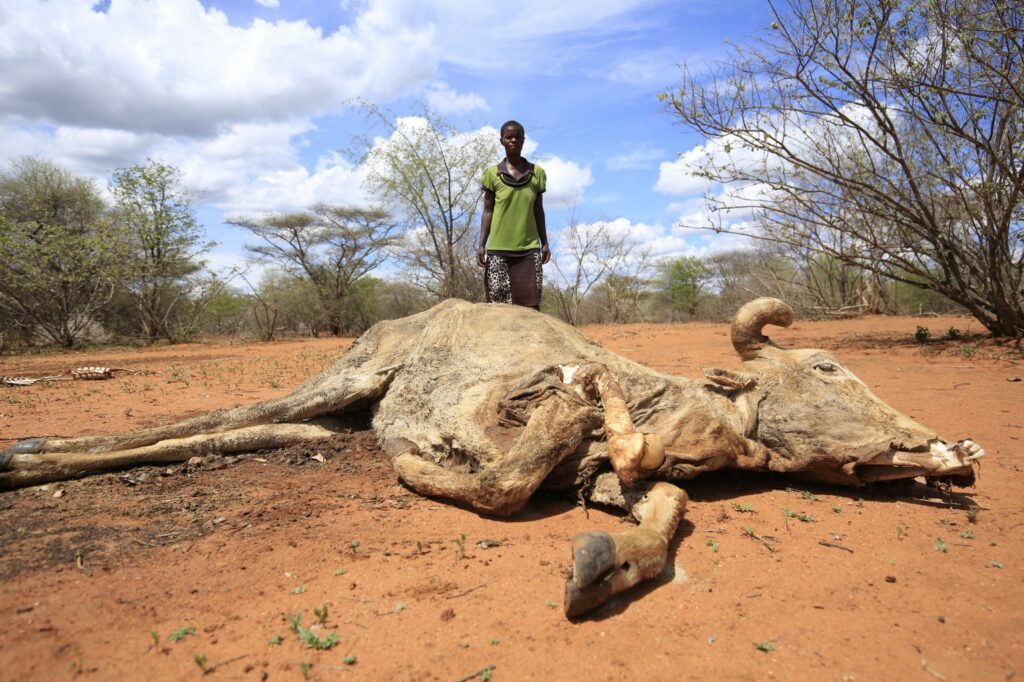 The Aftermath of Drought: They Used to Eat Three Meals a Day, Now They Only Eat One

The drought in Zimbabwe is not only making food and water scarce — it is eroding hope itself.

“The village rainmaker said we should appease the gods so that they bless us with rain,” says Eddies Mafire, a resident of Mwenezi, a small district of southern Zimbabwe, which, like the rest of the country, is being crushed by drought.

She adds: “Traditionally we would have made beer to offer to the gods, but this time there was nothing to make beer with.”

Dried out carcasses of cattle have become common scenery. Farmers have no way of saving them.

More than half of Zimbabweans — 7.7 million people — are struggling to feed themselves. The United Nations World Food Programme (WFP) is currently doubling the number of people it helps, to reach 4.1 million.

WFP distributes monthly rations of grains, beans and vegetable oil, as well as specialized nutritious food for pregnant and nursing mothers and infants. An additional $200 million is urgently needed if we are to be able to fund its scale-up through June.

In a testament to her upbeat nature, the bright yellow and red skirt Eddies is wearing contrasts with where she’s at in life: a breaking point. Zimbabweans are bearing the brunt of prolonged drought and an economy in freefall. 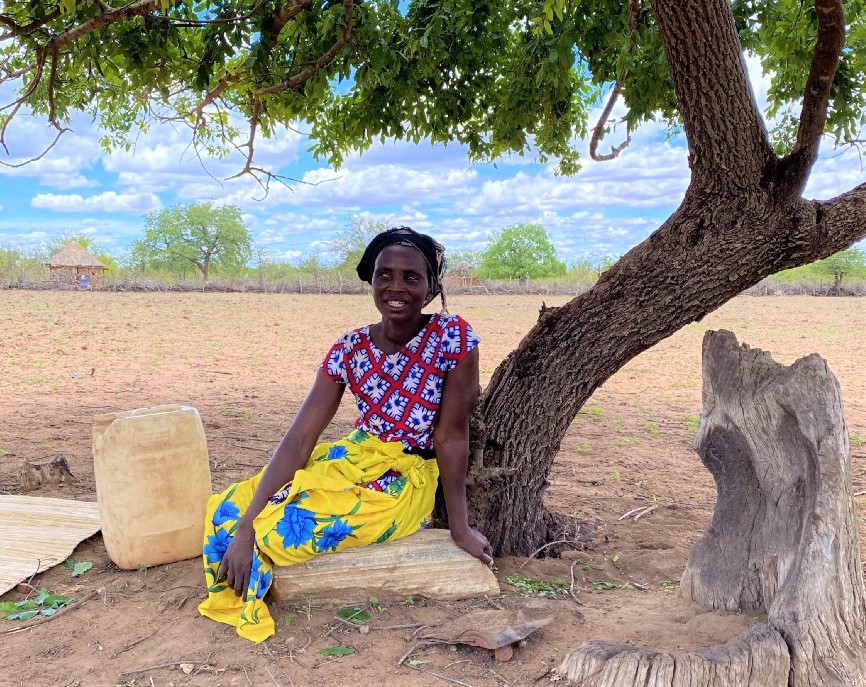 Eddies sits under a tree in front of her barren farm.

Eddies’ responsibilities are considerable. She’s a widow, which means she heads a family of 28 that includes her mother, three sisters-in-law and their 23 children. Their community’s dire prospects forced her brothers to leave their families and head for South Africa in search of work.

“There was a time when we could pick vegetables in the fields and cook them for the children,” says Eddies. “Now, look around you. It’s a tragedy. There’s no light at the end of the tunnel.”

Rains fail the family year after year. Fields are bare and parched. “It seems like everyone, even God, has forgotten us,” she says.

By noon the children are cranky. They haven’t eaten all morning and can see a pot of sadza on the fire — a porridge made from cornmeal or sorghum.

The meal is served on a communal plate. As the children gather around it, even the youngest, aged two, knows she must fend for herself before her older siblings finish all the food. This is both their first and last meal of the day. 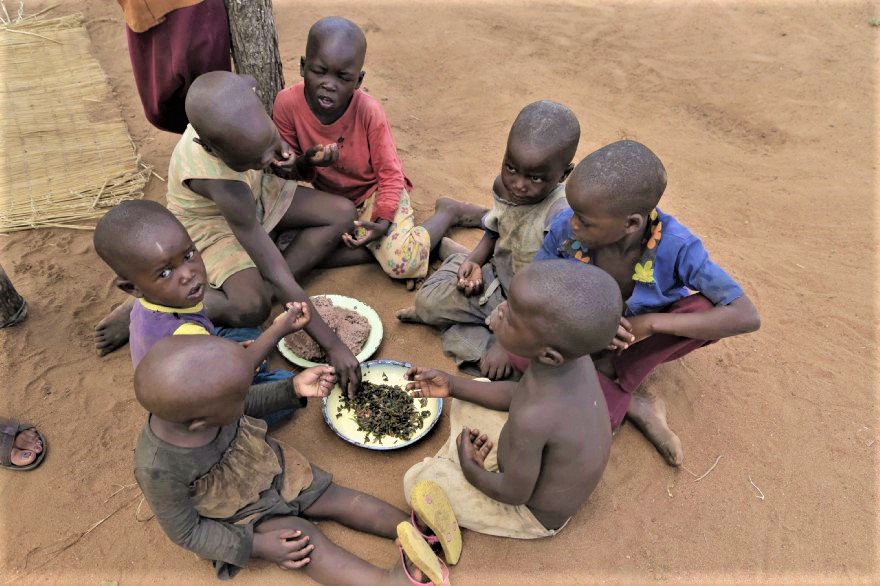 The sadza is served with cooked wild greens that were gathered from a nearby forest.

“We used to eat three times a day, but now we can only afford one meal,” says Eddies. “We used to cook in a very large pot and now we cook in a much smaller one. That is all we can afford.”

Runaway inflation and a dire shortage of local currency have pushed the prices of staple foods far beyond the means of most Zimbabweans. “I can’t even afford to buy salt,” says Eddies.

In 2019, the prices of basic foods increased by an average of 350 percent, with cornmeal recording the highest increase, over 600 percent. With incomes stagnant or non-existent, access to food has become a huge struggle for Zimbabweans.

Eddies’ family is cash-strapped and has resorted to eating worms and wild leaves they forage in the forest. Without rations from WFP, they would starve, they say.

Eddies and her sisters-in-law walk 2 miles to a WFP food distribution. Since they lost their donkey to drought, they’ve had to push their food-laden cart back home under the scorching sun. 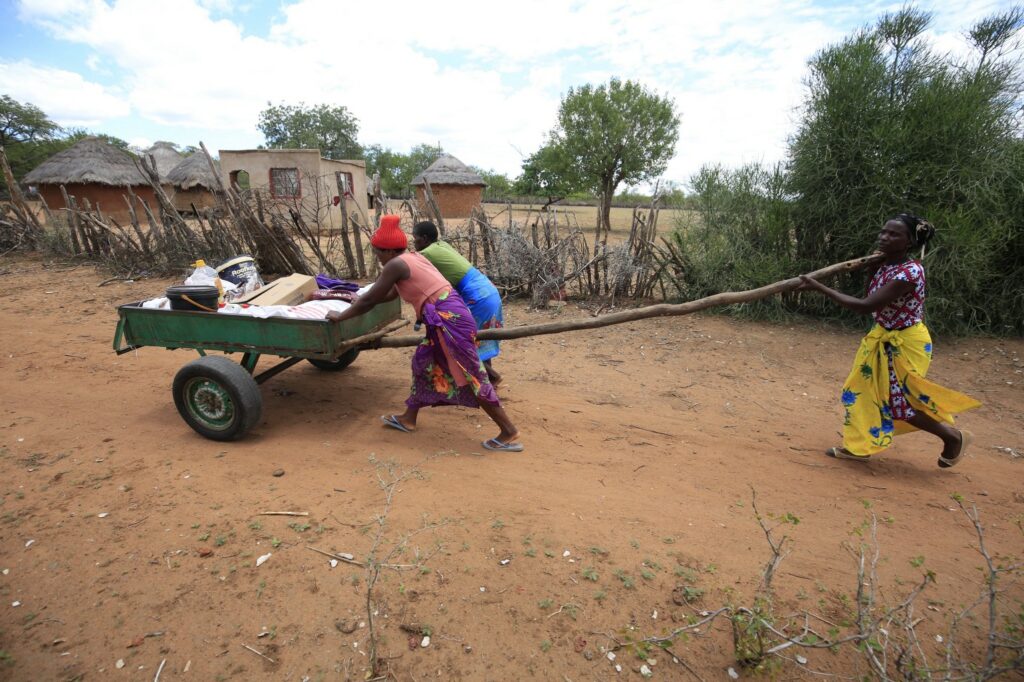 Eddies and her sisters-in-law must push their food-laden cart themselves after their donkey died.

Back home, the cart is greeted with sighs of relief. While the food brings hope for survival, on the other side of the farm, Eddies’ one remaining cow — from a herd of 15 — struggles for life. With the nearest water source 2.5 miles away and hardly any grass, the cow can no longer stand. Eddies asks village boys to help it do so.

The prized beasts of burden are succumbing to drought in large numbers. Eddies lets out a chuckle as she points to a nearby piece of land where villagers dump dead cattle. They fondly refer to it as a monument to their heroes.

The ‘monument’ is littered with days-old carcasses. Walking past, Eddies says, “If we stop getting WFP rations, I’ll end up here.” She adds: “It’s one thing to see my cattle die in front of my eyes, but what pains me most is not being able to send the children to school.” 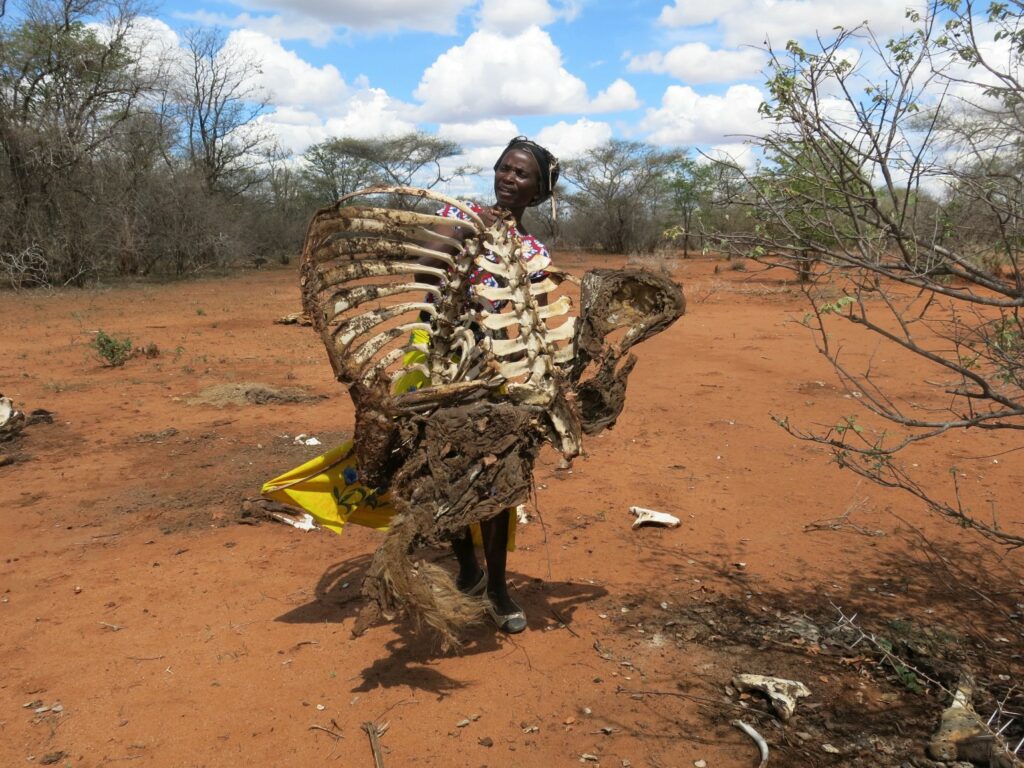 Livestock are a major source of income for communities in Mwenezi. The sale of a single cow used to bring in enough money to buy food and to send the children to school.

Her eldest son, who wants to be a teacher, is now sitting at home. “He tells me he can’t go to school on an empty stomach.”

Sitting pensively under a tree, Eddies recalls happier times — times of plenty. While Christmas used to be a time of celebration, that wasn’t the case last December. “We all sat at home. No food, no celebration,” she says.

Eddies is worn out, and deeply sad. “Very soon you may hear news of my passing. My mind and heart are so stressed.”

With the likelihood of yet another poor harvest in a few weeks’ time, ensuring enough food for families like Eddies’ will remain a huge challenge.

Walking under the scorching sun, as we dodged the carcasses, I heard my Zimbabwean colleague humming a song:
Vamwe vaparara nenzara (Some are dying of hunger)
Vamwe vachifa nekuguta (Some are dying because of a full stomach)

This story was written by Isheeta Sumra and originally appeared on WFP’s Insights.

Learn more about the situation and what WFP is doing to help.