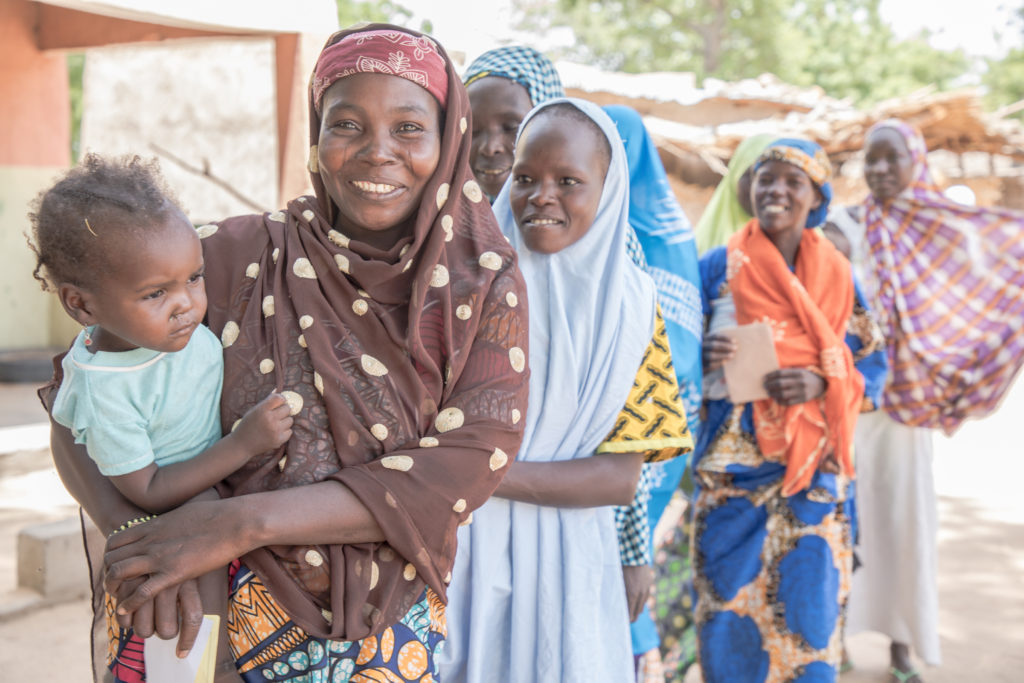 He Developed His Dream on a Fishing Boat. Now, It’s an Anti-Poverty Movement.

When you ask nonprofit founders how their organization began, spending months on a fishing boat is rarely the answer. But that’s exactly where Clint Borgen developed his dream for The Borgen Project, an NGO that fights global poverty through advocacy and civic engagement. His ideas weren’t pulled completely from the sea, rather, they were inspired from unique global experiences that made him passionate about garnering more U.S. political attention on the issue of global poverty.

Nearly 20 years later, The Borgen Project has evolved from a sketchbook of plans, to a nationwide campaign with volunteers in 931 cities. It advocates, mobilizes and educates to improve the living conditions of people living on less than a dollar a day.

Intrigued by his organization and career, we caught up with Clint at his home in Seattle. We asked him more about that fishing boat and his prior experiences – and how The Borgen Project is currently working to change the world.

World Food Program USA: Clint, we’ve read your bio, and frankly, it’s pretty incredible. Can you tell us more about your background, where your passion for ending global hunger and poverty come from, and what about that fishing boat motivated you to start working on this project?

Clint: Sure. During college, I spent some time volunteering at Kosovo refugee camps where people were fleeing the ethnic cleansing happening in the Kosovo war. During my time volunteering, I was both really empowered by how little it takes to improve basic living conditions of people in need, but also really angry that the U.S. wasn’t doing enough to address it. I realized there was a lot of room for improvement in U.S. foreign policy and aid – and that’s when the idea of creating an organization to put pressure on U.S. leaders to do something began. 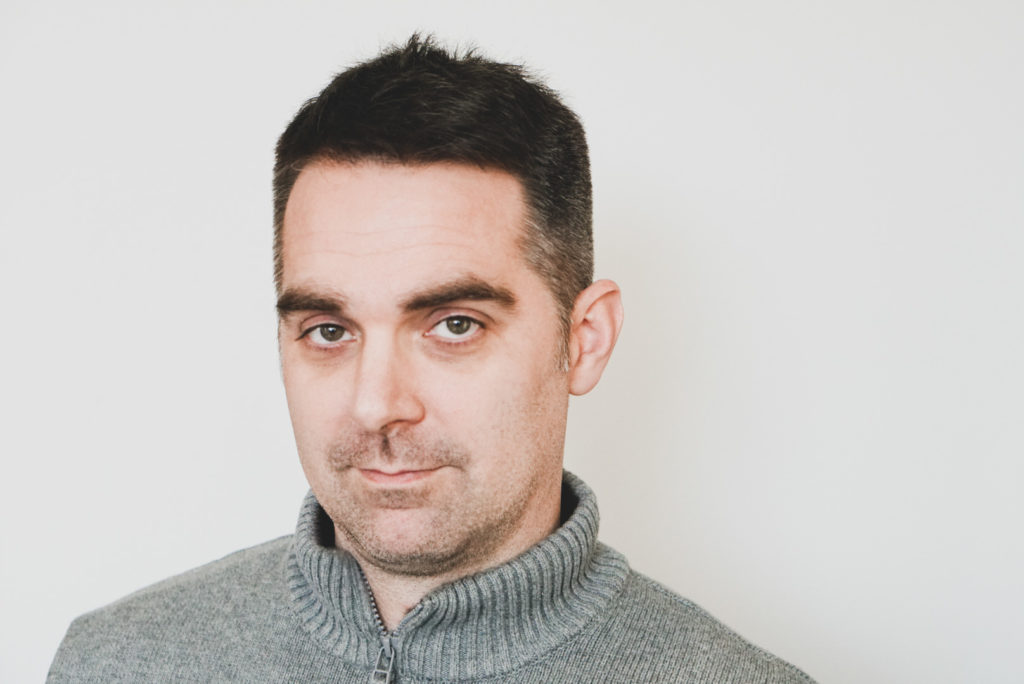 Clint Borgen, founder and president of The Borgen Project

But I graduated soon after Sept. 11, and the economy was bad. I had college loans and was in no place to start an organization. So, I took a job on a fishing boat up in Alaska. My job was to watch the boat during off season when the fishermen were gone. I spent a year up there, and being alone, had tons of free time, so I began developing the plan for The Borgen Project.

Sixteen years later, I’m proud to say that The Borgen Project has become an impactful organization that has access to members of Congress and the Senate and has volunteers in 931 cities nationwide.

World Food Program USA: Can you take one step back and give us a 30,000-foot view of the Borgen Project?  What is its mission and what are some of the accomplishments you’ve had?

Clint: The short version is that we’re an influential ally for the world’s poor. We try to get members of Congress to address poverty more than they otherwise would. We want to make sure the U.S. government is funding programs that help the most vulnerable.
That’s the broad answer, but within that, we identify certain issues and bills. For example, we’re advocating for the Global Health Security Act and the End TB Now Act, and recently, our advocacy has shifted a lot towards COVID-19 relief. Right now, we’re working to make members of Congress more aware of how COVID-19 will affect the U.S. for a long time if we don’t address it overseas. Because as long as it exists in one country it will exist in our country. 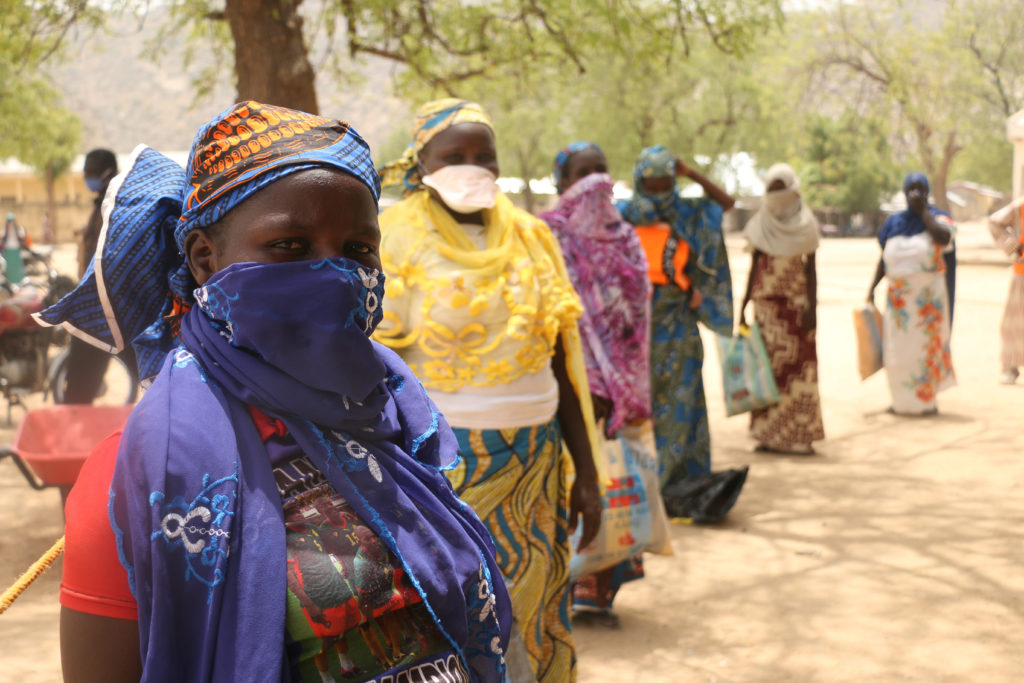 In Cameroon, mothers line up at the local school to receive take home ration for their family. Across the world, millions of children are missing out the the meals they rely on because of COVID-19

World Food Program USA: It sounds like the Borgen Project works with national leaders to build support for anti-poverty legislation. Can you talk more about why working with policymakers is key to ending poverty and hunger?

Clint: It’s because of the scale of impact policy and legislation can make. The amount of resources the U.S. government has is huge comparison with even the largest foundations or nonprofit. The World Food Programme is a great example. It’s doing amazing work on the ground, but still relies heavily on funding from the U.S. – and most organizations do. So garnering U.S. support is the most effective way to move the needle on global poverty. 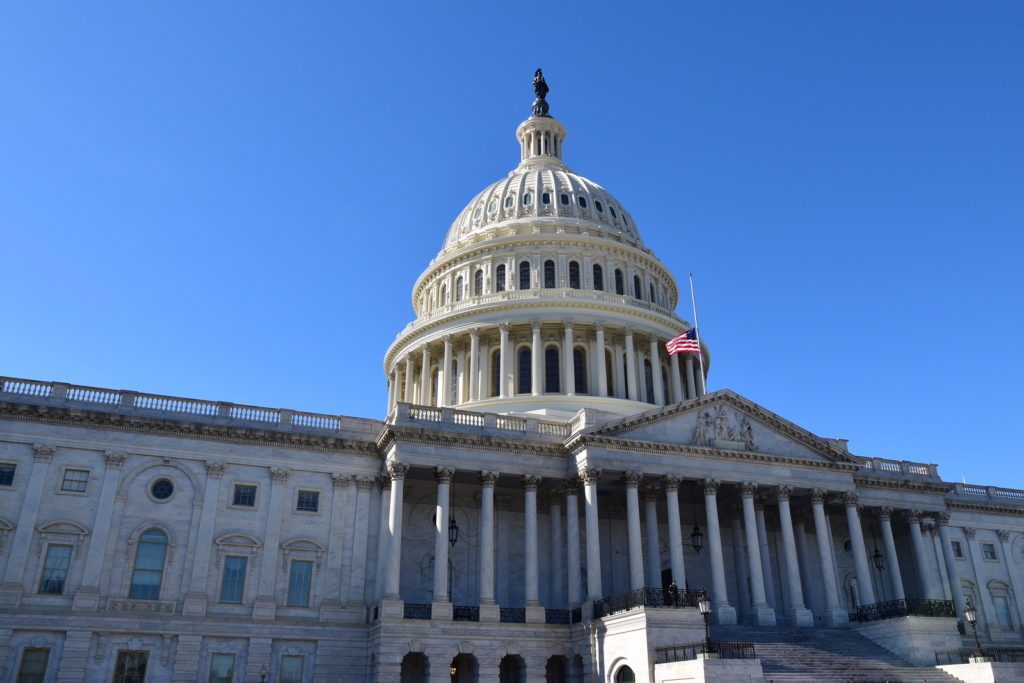 World Food Program USA: You mentioned that some of your policy priorities have shifted with COVID-19. I know what one of those priorities is partnering with the U.S. Global Leadership Coalition to ask for $12 billion in funding for emergency relief. What will this funding go towards?

Clint: To give a broad overview, about $4 billion would go toward global health and pandemic response, $5 billion toward economic humanitarian assistance and $3 billion for frontline operations. In part, this money would go toward ensuring that all countries have adequate infrastructure in place to deal with the crisis.

I think what has a lot of us concerned is that, in places like sub-Saharan Africa for example, they just don’t have the infrastructure in place to deal with their current disease burdens. And if on top of that, thousands of people become infected with COVID-19 – well, that’s a recipe for disaster. 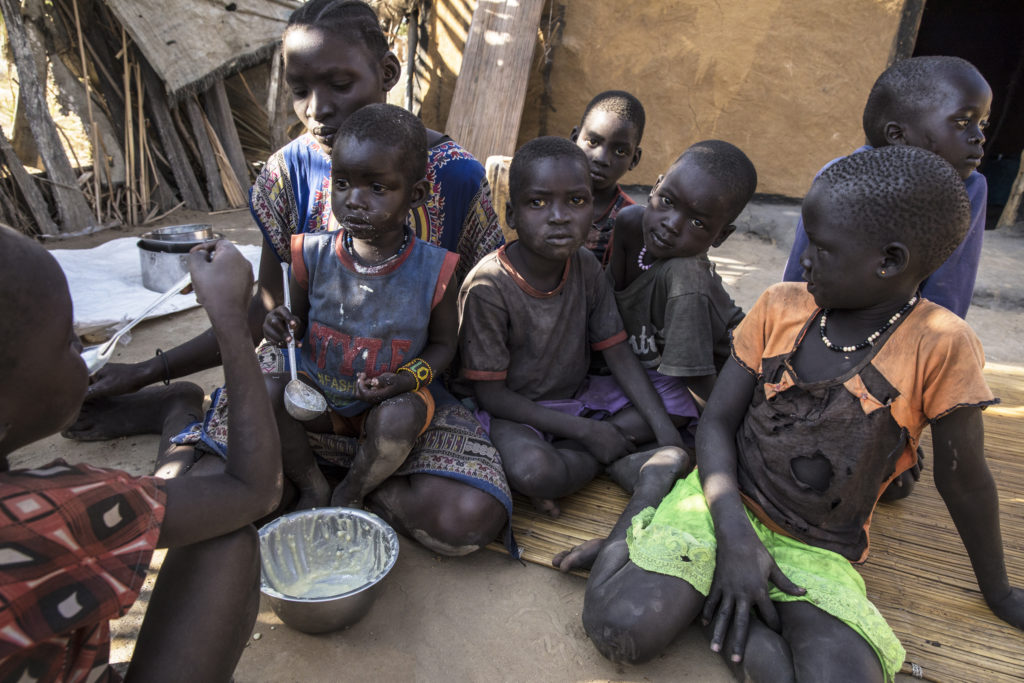 A woman and her children in South Sudan. Embroiled in conflict, the nation is facing a critical humanitarian situation with chronic hunger and malnutrition affecting families and children in particular.

World Food Program USA: Yes, plus, in addition to disease, this pandemic is affecting hunger in those areas too. For example, in South Sudan, on top of regular assistance to 5 million people, the World Food Programme is planning to assist an additional 1.6 million people who will face hunger because of the economic impact COVID-19 crisis.

But of course, many people are struggling here at home. What would you say to people who wonder why the government should help people abroad when there’s so much need in the U.S?

Clint: I’d say that rising rates of COVID-19 abroad will have a tremendous impact on the U.S. if we don’t do something to help. Largely, because COVID-19 is contributing to rising poverty rates across the world. Economically, the U.S. has benefitted from falling poverty rates. Upwards of 50 percent of our exports now go to emerging markets that formerly had no consumer class. So, as the economic impact of coronavirus hits these countries, it’s shrinking the consumer class that’s developed, and as a result, shrinking markets for U.S. companies. 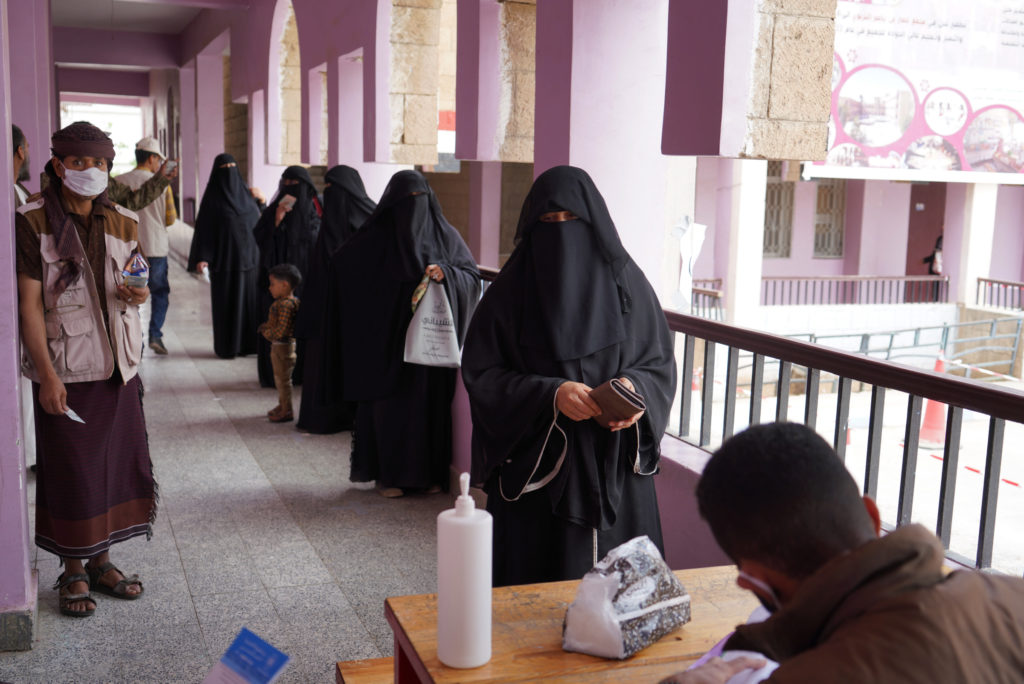 Women in Yemen line up to receive WFP assistance during the pandemic.

WFP USA. It’s true that we’re not immune to what’s happening on the other side of the world. Despite the current need in the U.S., it seems that many Americans have always understood that.

With that in mind – how do you work with Americans to get them involved in your work? You know, not everyone is a lobbyist and the political system can seem really overwhelming. What are some simple ways that people can get involved that will really make a difference?

Clint: The simplest thing is to email your member of Congress in support of the legislation we’re working on. We have a section of our website that breaks down how to do that. The other one is put your leaders’ phone numbers in your phone – and when you have a free minute – call and state your support. It takes 30 seconds, and their staff tally every call and email received and include in a daily or weekly report that leaders review. 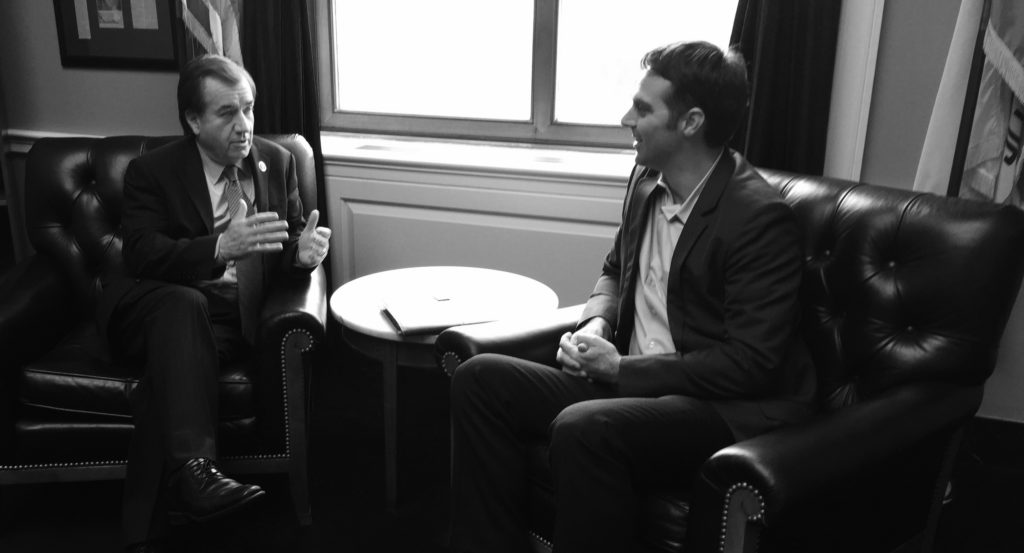 In addition to calling, we strongly encourage citizens to set up a time to meet with their Congressional leaders in person. I realize it might not be possible right now – but when the time is right – these meetings have a huge impact. I’ve seen interns who join The Borgen Project, secure an in-person meeting with their representative, and a week leader that leader co-sponsors the bill.

It’s amazing how much influence your everyday person has over members of Congress, and how far a simple call or meeting will go. Our job at The Borgen Project is to make people realize that. And for calls and emails, you don’t have to know everything about the cause; you don’t have to answer any questions. You just have to state your support – and organizations like The Borgen Project or the World Food Program USA can leverage that to make a big difference. 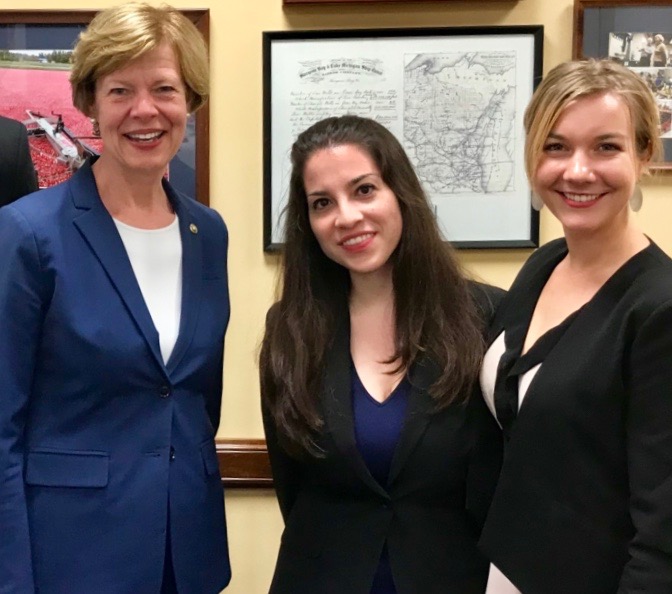 Clint: Hunger is a huge part of it.

A decent percentage of the bills we work on revolve around the issue of hunger. For example, we did a lot of lobbying around the Global Food Security Act. It’s significant, because if people don’t have food it has a dire impact on many parts of society – from risk of conflict, to children’s brain development to people’s vulnerability to sickness and disease. It’s amazing how many issues are tied to that one problem. For me personally, I believe that hunger and access to water are two issues critical to ending poverty.

At World Food Program USA, we also advocate for policies that promote food security, and are dedicated to securing robust U.S. government commitment toward fighting hunger. Learn more about our policy and research.