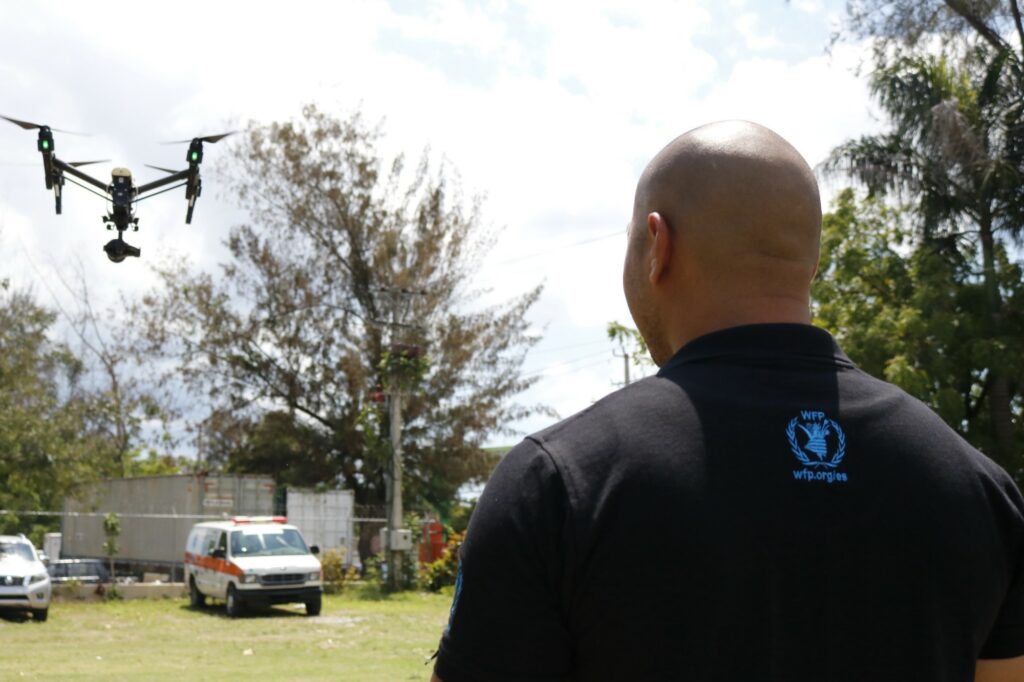 Angel and the Drones WFP/Katiusca Gonzalez
Angel Buitrago helped to pilot a drone after two hurricanes in the Caribbean.

Angel Buitrago is an IT officer in the World Food Programme (WFP)’s regional bureau in Panama. Here he provides a first-hand account of his use of UAVs (Unmanned Aerial Vehicles), or drones, during an emergency — and discusses the huge potential for this fast-evolving technology in tackling and preventing humanitarian catastrophes.

My role has been changing over the past year, from IT into Emergency Preparedness & Response, but combining both. A normal day for me would start with IT, running the network servers in Panama. Then in the afternoon it could be something more related to emergency preparedness and response systems, radio or satellite technology.

Ours is a small region with not many big emergencies normally, so there is more focus on the preparedness side. It’s about working with country offices to make sure they have plans from disaster recovery to emergency preparedness.

“The concept was very simple — let’s buy drones and use them to support logistics.”

We have a United Nations Humanitarian Response Depot in Panama, and in 2016 a pilot was started to equip them with drones. The concept was very simple — let’s buy drones and use them to support logistics assessments. I was part of the training and this is where it all started.

The UAVs side is taking up much of my time. We are doing workshops in other countries and meeting with other people involved in the humanitarian sector, including governments, academia and NGOs, to get direct feedback about the possibilities of UAVs, the challenges, how to use them, and the benefits they can bring. Every time we do one we get a request to do another in a different country.

When Hurricanes Irma and Maria hit the Caribbean between August and September 2017, we decided to do a pilot with a single drone, to see if we could support assessments.

In the past there were many occasions, when I was working on satellites and wireless connectors for connectivity, that I had to go to remote locations. But access was difficult as roads had been blocked. Using the drone we were able to do assessments without having to go to a location, and the images were extremely high quality and helped a lot in allowing us to deploy more efficiently. An image or a video can say more than 1,000 words. WFP/Katiusca Gonzalez
Angel is dedicating more of his time to working with drones as the technology develops rapidly.

There’s a wide range of information that you can get from a drone — for example in Dominica aerial images told us how many houses had been affected and roads blocked, and what kind of damage was done. We did this for several communities affected by Hurricane Maria.

You can also do assessments of crop damage and of the overall health of agriculture, although we didn’t do these two in Dominica due to lack of time. Drones also allow you to see where people are moving to.

Drones can work with satellites

The standard approach for WFP up to this point was to receive satellite images, and then produce maps and different products for analysis based on these. With drones you can get a higher quality of detail of the communities affected, and then you integrate that with the larger-scale map from the satellite.

“It was clear to me after Dominica that drone technology could work very well.”

In Dominica the skies were cloudy after the hurricane. This is something that would normally be a nightmare for people who work with satellite images, because the clouds cover large areas that you want to see. You get a map but you have a big cloud over the cities for example. This is where drone technology can help, because you can fly drones underneath the clouds and get the images of those areas, and replace the part that is covered with clouds with the drone image. WFP/Angel Buitrago
Drone image of Angel (front, centre) at work in Dominica, where a UAV helped pinpoint the extent of hurricane damage.

It was clear to me after Dominica that drone technology could work very well, and make the overall response very efficient.

We’re looking to reduce the time it takes to do damage assessments using drones. Just to give you an idea — to come up with a map that allows you to assess damage in a location the size of Dominica, using satellite images, takes a week and a half or two weeks. Even then the end product is not ideal in many cases. In Dominica I managed to get a whole map of the community within a day.

“You can see clearly how many people are on the ground, right down to the colour of the grass and of the crops.”

Satellite of course has a lot of advantages, especially when it comes to covering large areas. But most of the time you don’t need to cover the whole country. This is where it’s important to see where we could use drones to make it faster. If you want to focus on the south or east side of the island, it’s two days’ work with the drone. And you get really high quality, where you can see clearly how many people are on the ground, right down to the colour of the grass and of the crops. This is where we think drone technology will help us make assessments a lot more efficient in the future.

Testing with the crops of Colombia

Aside from emergency response, in Colombia we’re looking at using drones in the field of climate change and adaptation. The idea is to find opportunities to apply drone technologies to assist indigenous communities between Colombia and Ecuador. We’re piloting a special drone that could be used to help communities more efficiently monitor their crops, which is their main activity.

“I spent time explaining why we were there, why we were using the drone, how the information was going to be used.”

We held workshops last year in Colombia as well as the Dominican Republic and Peru, with representatives mainly from the governments, and also some from universities, private sector and other UN agencies.

For WFP there were two objectives — one was to assist governments in the very initial stages of using drones for emergency preparedness and response specifically. The second objective was for us to learn as well — from the experiences that were already ongoing — to develop and fine tune the WFP coordination model for UAVs.

Laying the groundwork for drones

The first thing I did in Dominica was coordinate with the aviation authorities to make sure I was flying the drone in the safest way without compromising any aerial operations. I also liaised with local authorities and communities. I spent time explaining why we were there, why we were using the drone, how the information was going to be used. And then I ensured that all the images that were captured were used for the purpose that I had told them. WFP/Angel Buitrago
An aerial shot from a drone of damaged homes and land after Hurricanes Irma and Maria.

This is something that is still a limitation, because compared with satellite you don’t need permission. It’s an additional step but I think it’s also quite good because you get feedback from the community — you have a chance to engage with them, and you get help to them.

We have to work more on other people’s awareness of drones too, including in the humanitarian sector. In Dominica — even though we had sat in a lot of coordination meetings and received requests from humanitarian groups in the past — there were a lot of people who didn’t know the procedure for requesting assistance from drones.

“We need to create more awareness about how drones are used.”

They’d ask me informally to take images for them or to make a map. We had an online platform where we were publishing the maps, but I would say only 5 per cent of the humanitarian responders knew about it. This is something we learnt from Dominica — that we need to create more awareness about how drones are used, what can we can get from drones, and that we need to disseminate more information about how to request services.

Many other things are going to come — this drone industry is growing at a tremendous speed. I think there’s a lot of interest from the humanitarian sector and there’s a lot more manufacturers making drones that are more robust, and that are cheaper, for emergency activities.

That’s one of the most exciting things. It’s a technology that’s growing super fast and we’re yet to see some amazing stuff.

— as told to Paul Anthem and Lisa Ferraro