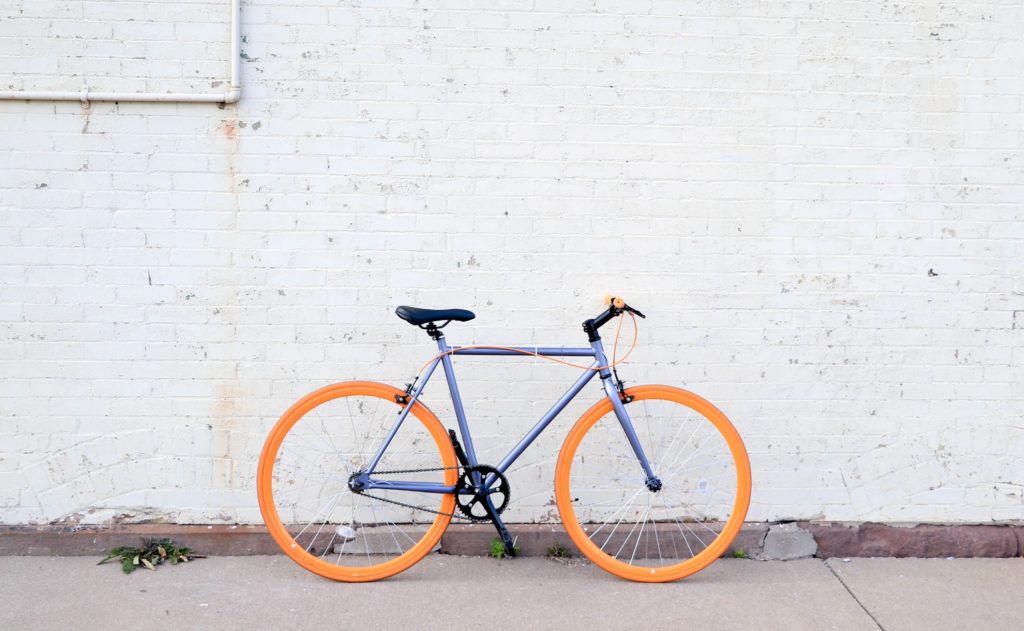 After Coronavirus Closed Schools in the Poorest, Most Vulnerable and Remote Part of Honduras, Teachers Got on Bikes to Deliver Food to Hungry Kids

Teachers on two wheels: When Coronavirus shut down their schools, teachers on the remote Mosquito Coast in Honduras turned to bikes to get food to hungry students.

A fishing ban that came into force at the beginning of March — and is set to last until July — is exacerbating the already challenging situation faced by families in La Moskitia, a region on the eastern tip Honduras’s Mosquito Coast. With parents’ sources of income disrupted, school meals represent the only food that children are likely to receive during the day. 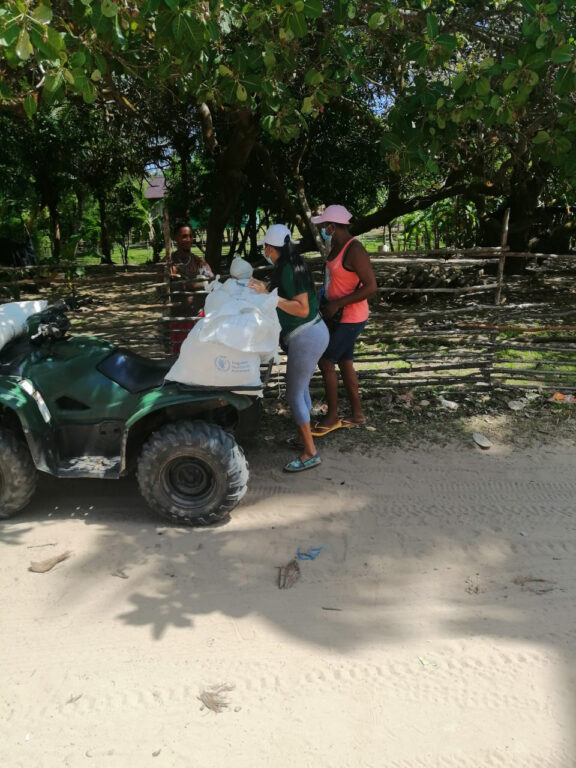 Because of the COVID-19 pandemic, their predicament has worsened. When authorities ordered the closure of schools across the country to contain the outbreak last month, the National School Feeding Program—which supplies hot meals to 1.2 million children a month — was also suspended.

To the people of La Moskitia, in Gracias a Dios, the poorest, most vulnerable and hard-to-reach county in the country, it seemed that this new storm had taken their only lifejacket.

It is a story being echoed across the globe, as partial or country-wide closures of schools are reported in almost all the countries where the United Nations World Food Program (WFP) — as the largest provider of school meals — implements or works with governments on feeding program.

In Honduras, the authorities took action on the matter and ordered mitigation measures that allowed students to continue receiving their food.

Thanks to a collaboration between WFP and UNICEF, in support of the Honduran Government, safety protocols have been developed for teachers, together with school feeding committees, to prepare food rations that had been left unprepared when the schools shut.

As a consequence, one adult per family can go to a school to withdraw a ration of food, consisting of rice, beans, oil and cornmeal.

Security protocols developed by WFP and UNICEF also allow for the delivery of take-home rations. So, professor Golda Haylock, District Director of Education in Kaukira, in Gracias a Dios, and the 80 teachers there, rolled their sleeves up. 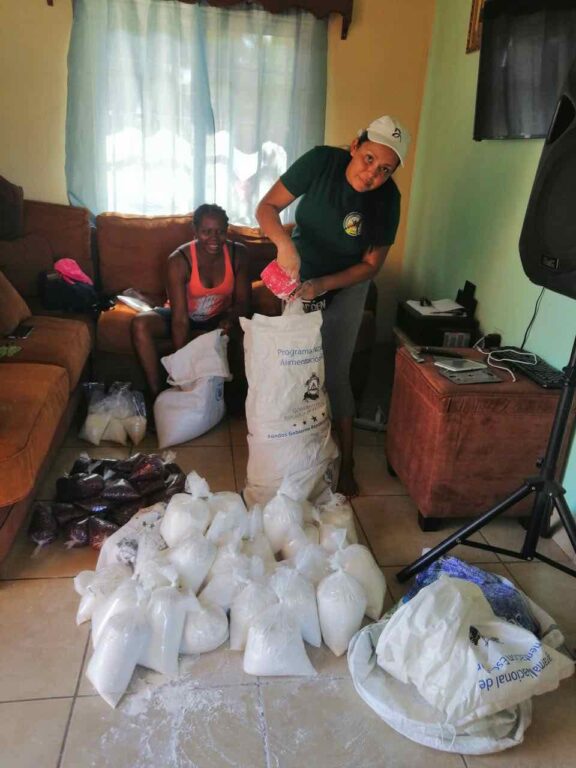 Determined to help: Dorla Haylock and Delsa López prepare food rations before heading out on their bikes to deliver food to their students.

“We decided to go for the door-to-door delivery to avoid crowds in schools, and it was also an opportunity to see how the children and their families were doing,” says Golda, who is also a teacher at the Kasbrikapiska school (which in Miskito means ‘piece of sky’).

In delivering food, the teachers take the opportunity to train families on how to keep the coronavirus at bay. They also verify the identity of families and document their living conditions, so that they can receive the appropriate assistance down the line. 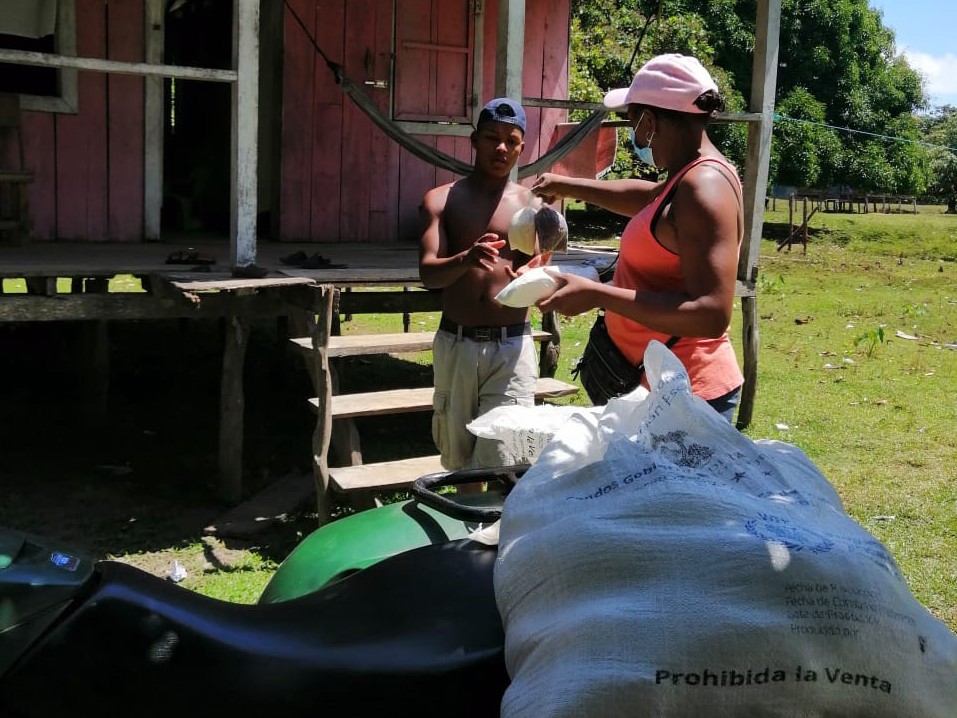 Above and beyond: Delsa López delivers food to a parent in Moskitia.

Kaukira is a community of Municipality of Puerto Lempira in Honduran Mosquitia, in the department of Gracias a Dios. This is where the Miskitos live, one of the eight ethnic groups in Honduras, who have their own language.

Classes in educational centers are taught in Spanish and the indigenous language, Miskito. Kaukira is located on the other side of the Caratasca lagoon. From Puerto Lempira it takes an hour by boat to reach these communities.

The National School Feeding Program is one of the most important social protection provisions of the Honduran Government. It benefits 1.2 million boys and girls in 22,000 educational centers around the country. 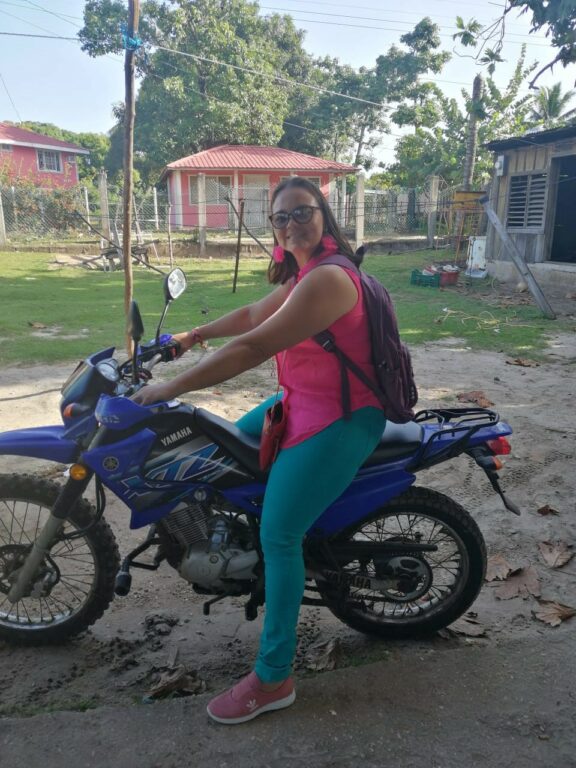 Kindergarten teacher Dorla Haylock heads out to check on students and bring them food.

Teacher Dorla Haylock — Golda’s cousin and a teacher in the kindergarten in the village of Dapa — was not deterred by either the sun or the distance involved. She and teacher Delsa López prepared the food rations and rode on an ATV, or quad bike, to deliver the cherished cargo to students’ homes. The experience left Dorla, who’s been working in Dapat for 18 years, with mixed emotions.

She says: “This distribution allowed me to see how each of my 48 students were, see the conditions they were in and witness the joy with which they received the rations we delivered … in many homes, not even the stove was lit.”

“It was very sad to go to these communities and see that the children are looking for green mangoes, because many times it will be the only thing they will eat that day.” 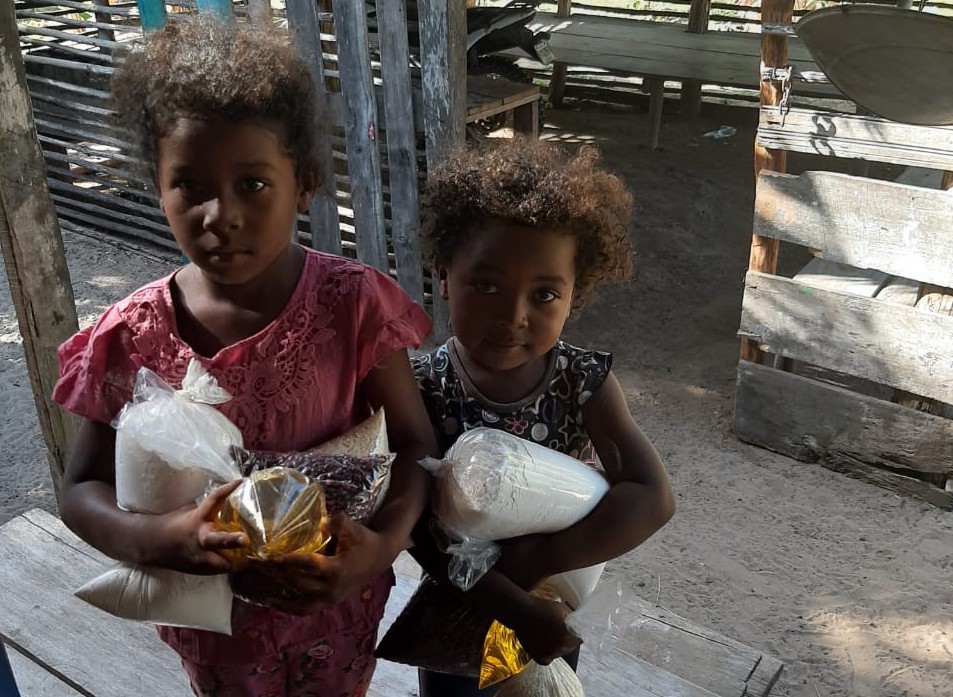 Karen Sánchez, a WFP field monitor, says: “Seeing the faces of happy children when they receive school meals is priceless, as most of them often have nothing to eat at home.”

She adds that the teachers’ use of bikes to deliver rations door-to-door is motivated by the love they have for their students.

According to Danny Greenwood, WFP’s coordinator in the area, it is a logistical challenge for WFP to support the Government in the implementation of the National School Feeding Program in Gracias a Dios department.

Ninety percent of journeys to La Moskitia are made by water. This makes the operation riskier. Trips can be three times more expensive than they would be to other parts of Honduras.

In addition to its isolation, moving from one community to another in this area can take up to six hours by boat — it can take up to three days for all of the food to be delivered. “This process is supported by local authorities, teachers and parents, since the food of the National School Feeding Program is highly appreciated in these areas where the situation of families is very difficult,” says Greenwood.

This story was written by Hetze Tosta and originally appeared on WFP’s Insights.