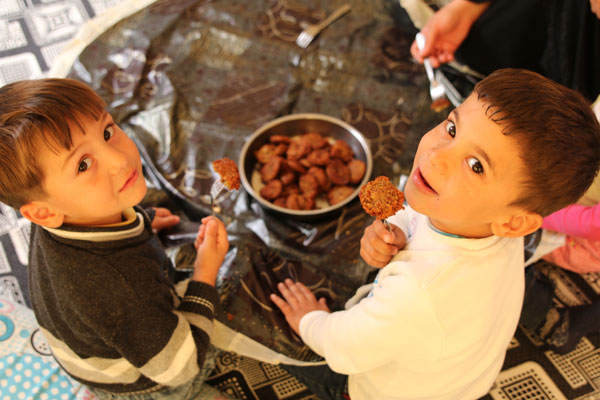 Culinary Diplomacy: The Power of Food as a Tool of Peace

The U.N. World Food Programme—through its work in conflict areas, refugee camps and other hunger hotspots—practices the most ideal, important form of culinary diplomacy.

Culinary diplomacy, an emerging field of diplomatic studies, examines how food can be used as a tool to promote relationship-building, cooperation, and peace. It is practiced at many levels; when the President hosts a State Dinner, the meal both serves as a reflection of American hospitality and ingredients as well as a tribute to the visiting head of state. A few national governments—including Thailand, Peru, and the United States—have also launched public-facing culinary diplomacy campaigns, reaching out to foreign officials using food to promote trade, tourism and cooperation. Culinary diplomacy can also occur on an everyday level when each of us interacts with people from around the world in a culinary context. This occurs every day all around the world, whether at your neighborhood Ethiopian restaurant, an Indian food truck in Melbourne, or a Turkish kebab stall in Berlin.

Food is, of course, one of the oldest tools in the diplomat’s kit, but it has only recently been examined in that way. From ancient China to Persia to Greece, royals and leaders entertained foreign heads of state, eager to show off their nation’s culinary heritage. The Silk Road, for example, facilitated culinary exchange in addition to economic and cultural interdependence. In today’s global economy, we are even more interconnected, with myriad options on grocery store shelves from across the planet and restaurants serving food from formerly inaccessible places. To learn about our global neighbors, sometimes it’s as easy as going out for dinner.

Food is one of the oldest tools in the diplomat’s kit.

This accessibility to the cuisines and cultures of the world has allowed for a much better understanding of our place in a global context, and the responsibility each one of us has to understand both our own culinary heritage as well as to appreciate the diversity of the world’s cuisines. This extends beyond food, of course.

Interaction around the dinner table can itself lead to a greater level of understanding and empathy.  The contact hypothesis, popularized by the psychologist Gordon Allport in the 1950s, suggests that being close to others and being engaged in discussion, learning, and teaching can lead to positive connections. Contact around the dinner table, which evokes an even deeper level of intimacy – after all, to paraphrase the words of the French gastronome Jean-Anthelme Brillat Savarin, “We are what we eat” – is a powerful way to create connections, which in turn can promote cooperation, friendship, and community-building.

The WFP’s recent FamilyChef project is a perfect example of the power of food as a tool to promote cross-cultural understanding while also meeting the programme’s goal of feeding the world’s hungry. The ongoing series explores traditional Syrian cuisine through the recipes and stories of refugees who benefit from WFP’s e-voucher program. It also shows how the path to a hunger-free future isn’t just to ensure that refugees and others survive, but to help them thrive.

To accomplish this goal, WFP created this unique e-voucher program so families living in places where food is available, but unaffordable can shop for their own groceries instead of receiving traditional food rations. This way, they can prepare the dishes that they’ve always loved to cook for their family and friends. This can serve to bring them closer to home, to their pre-refugee kitchens, in a way that traditional food aid cannot. Through VoucherChef, WFP shares the recipes and stories of refugee chefs, teaching others how to make dishes from homes and camps throughout Syria and beyond.

To learn about our global neighbors, sometimes it’s as easy as going out for dinner.

In hearing the recipes and stories from the refugee chefs who are benefiting from the voucher program, those of us who aren’t able to join them at their dinner table can at least begin to understand the cultural and culinary background that feeds their lives. In preparing Merve Ismail’s stuffed beet greens or Um Sayid’s fried kubbeh balls, and reading about how they had to leave their homes in Syria with their families to flee to Turkey and Lebanon, we can begin to understand more about Syrian cuisine and culture. We may even be inspired to research more about Syrian history and current affairs. This is a potentially powerful outcome stemming from the roots of culinary diplomacy: the more we know and understand about our neighbors, the more empathetic we are, and the more engaged we can be in solving the world’s deepest problems.

None of us are isolated from the world; we are all part of a greater humanity. We connect to that humanity in many ways: through music, through politics, through literature, through food.

WFP is doing vital work to feed the world’s hungry, and through stories like VoucherChef, we can feel more connected to those who are embroiled in one of the world’s greatest catastrophes, and can remember that everyone loves to sit down with friends and family over a good meal.

Sam Chapple-Sokol is a consultant, researcher, and practitioner of culinary diplomacy. He blogs at www.culinarydiplomacy.com and tweets @culinarydiplo.