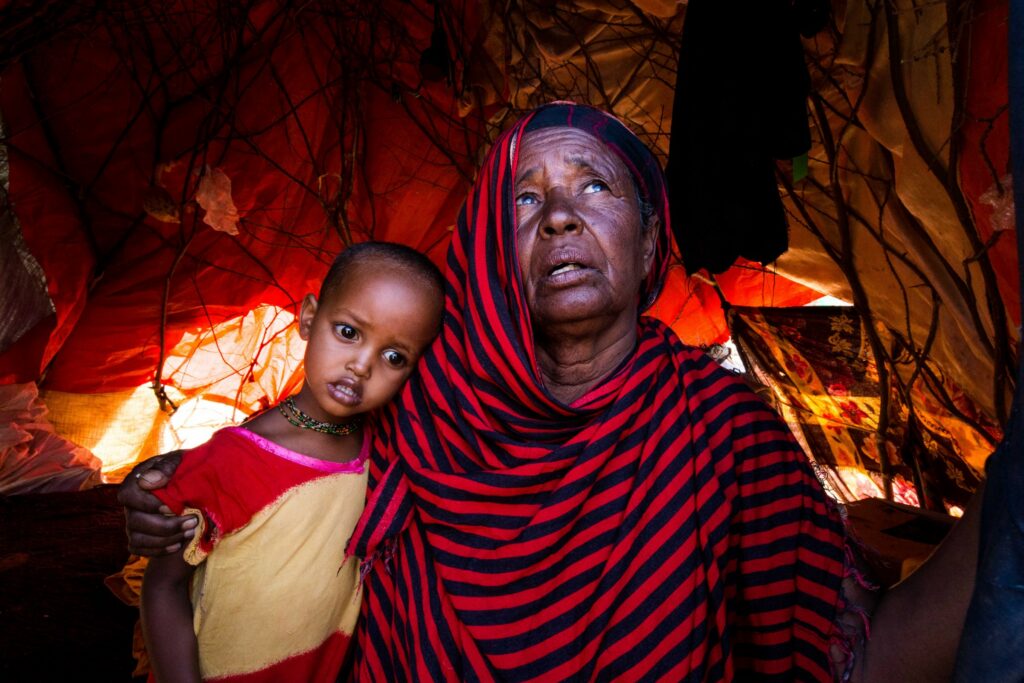 How Will Families in Somalia Survive the Driest Season in 35 Years?

After a brutal drought in Somalia ended in 2017, the country now faces one of the driest rainy seasons in more than three decades. Families face hunger and loss of livelihoods. They are struggling to adapt and find ways to continue their everyday lives.

In Jabaaqe, an agro-pastoral community in northwest Somalia, droughts have names. They called the 2017 drought “the kinship killer” because only a third of Jabaaqe’s community remained. Those who left went in search of water and pasture for their livestock, while those who remained prayed for rain.

Sitting in the abandoned schoolhouse with Jabaaqe’s village elders, I was told how the school shut down when there were no longer teachers or students to fill it. The community’s head farmer, Mohammed Farah, his skin darkened and hardened by the sun, told me that for more than two years, Jabaaqe’s farmland had been barren. Yet Farah and his fellow farmers continued to cultivate the earth every single planting season in the hopes of rain. I asked Farah what will happen to the community if the crops fail yet again.

His eyes are resolute as he answers: “It will rain,” he says, “It has to rain.” 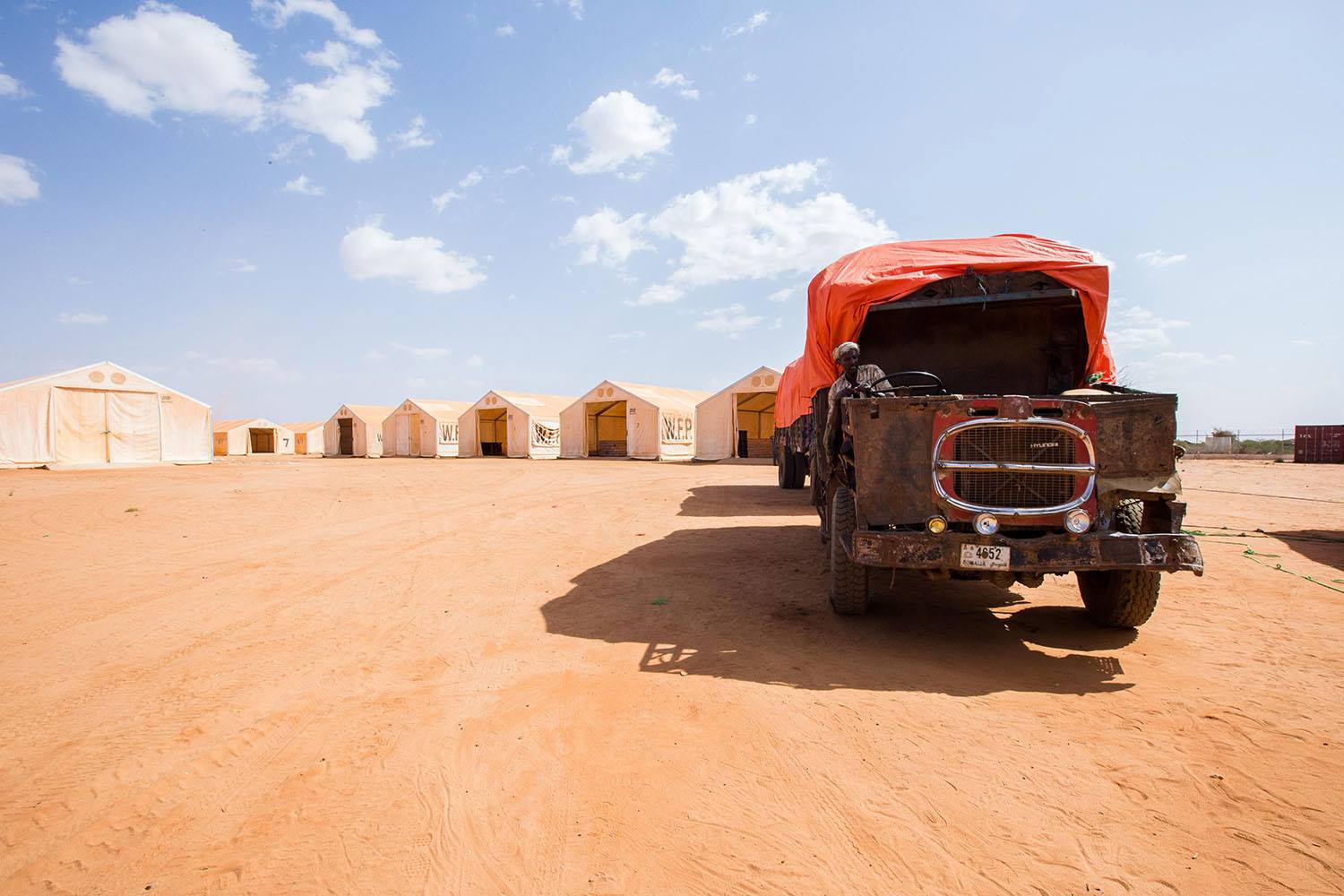 A truck with food from a WFP warehouse in Dolow prepares to distribute supplies across the South-Central region of Somalia in response to the severe drought sweeping across the Horn of Africa.

But the rains in Jabaaqe have not come and what little rain arrived in other parts of the country have been insufficient, scattered or late. For the poor rural folk who live off the land through farming or livestock rearing, the effects are devastating. Crop production in 2016 and 2017 was far below average, and the lack of water and pastureland across the country resulted in the death of over 50% of Somalia’s livestock. It will take years to recover the losses.

As of May 2018, 2.7 million people cannot meet their daily food requirements and require urgent humanitarian assistance, with more than half a million on the brink of famine. Another 2.7 million Somalis need livelihood support to keep from sliding into crisis.  An estimated 300,000 children under age 5 are malnourished, including 48,000 who are severely malnourished and face a high risk of disease and death. 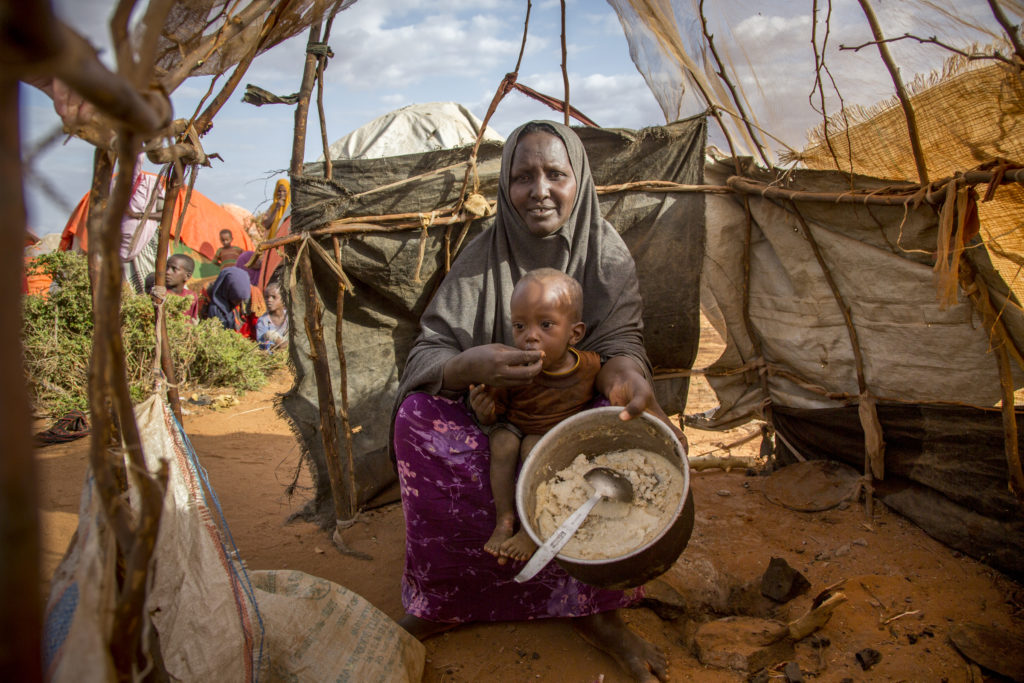 30-year-old Sacdiya Mohamed Noor sits with her one-year-old son in her makeshift kitchen in Kabasa camp. With her children, sister and nephew, Sacdiya left her home to escape the drought, leaving behind her mother and two sisters.

On top of this brutal web of hardship is ongoing mass displacement of families — about 950,000 people have been displaced as a result of drought since November 2016 (UNHCR, Nov 2017). Internally displaced people (IDPs) are among the most vulnerable in Somalia — living in poor settlements under the constant threat of disease outbreaks, malnutrition, violence, discrimination and eviction.

Since the famine alert at the beginning of 2017, WFP has been scaling up its response to provide assistance to more than 1.3 million people every month. 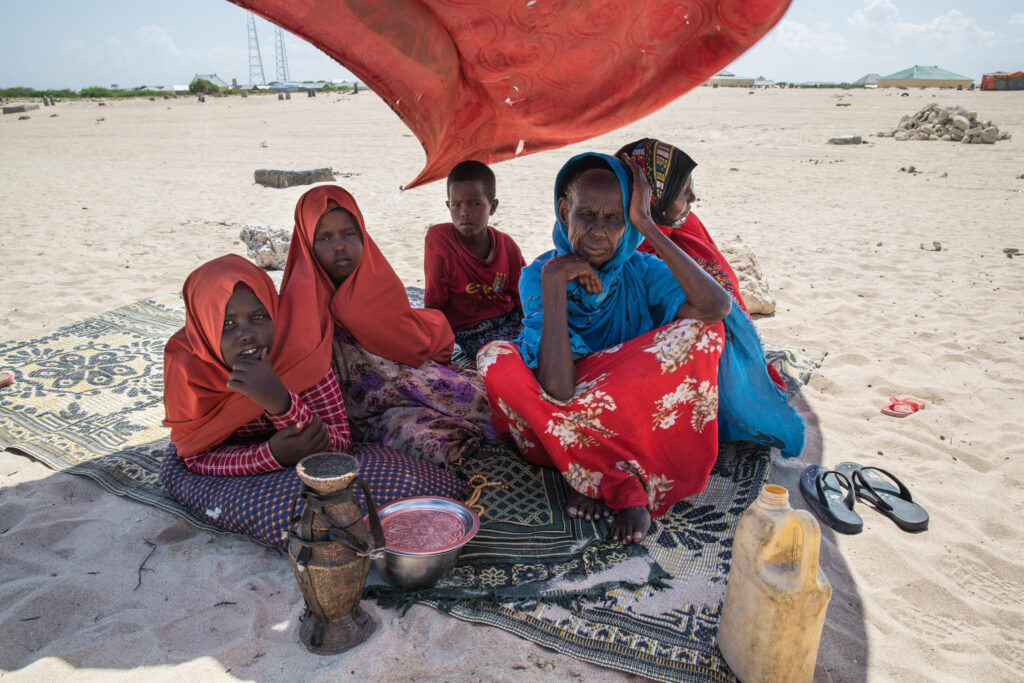 Madina, 84, sits with her daughter Fatuma, 52, and grandchildren in the shade in Hobyo, Somalia. Madina has poor eyesight made worse by the reflection from the sand. The family came here from Hadhere, 75 miles south of Hobyo.

In areas where markets are functioning, USAID-funded e-vouchers on WFP digital cards have allowed families to buy a range of diversified nutritious foods at over 850 local shops across the country. Holders of the digital cards scan their fingerprint (biometric data) to confirm their purchases, providing assurance to WFP and USAID that assistance is reaching the people who need it most.

Tons of dried foods like rice and beans are enabling WFP to feed hundreds of thousands of vulnerable Somalis. This food is transported into Somalia by sea and air, making its way to WFP food distribution sites, soup kitchens, schools and nutrition centers where children and pregnant and nursing mothers receive critical nutrition support to either prevent or treat moderate acute malnutrition. 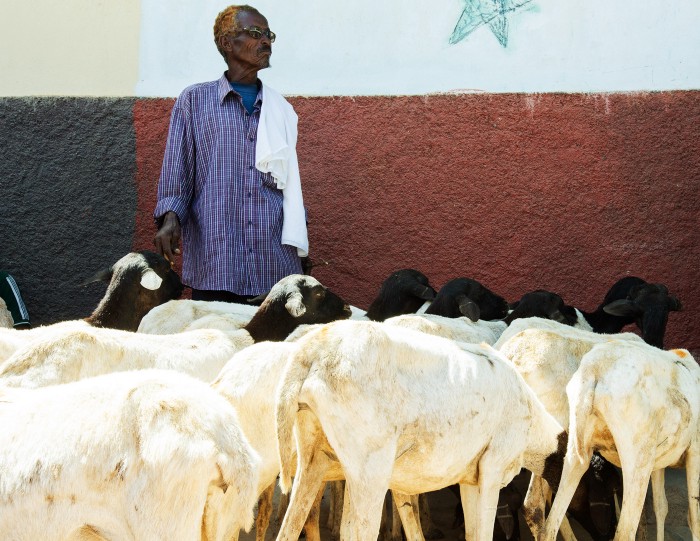 Musa Ahmed traveled 100 miles with his 50 underfed goats to sell them at the market in Gabiley, Somaliland. Only 20 survived the journey. He will be lucky to get even a sixth of the market price for any of them.

But the worst may not be over. Somalia is confronting the stark possibility of a longer than normal season of poor rains. Somalia received good rains in May that brought some relief, but it wasn’t enough to reverse the drought-like conditions. Any improvements were small and short-lived. The situation is most severe in northern areas like Puntland and Somaliland, where families are suffering through the driest period in nearly four decades. The sparse showers ended half-way through May, signaling the end of the rainy season, which typically extends into June.

This could spell more trouble for farmers and pastoralists across the country. Large scale, life-saving humanitarian assistance will need to continue for the millions who have yet to recover from severe food insecurity and previous losses of livelihoods.

Back in Jabaaqe, Farah took us on a walking tour of the village’s farmland. He crouched and grabbed a handful of dirt and released it into the wind. We watched the dust scatter upon the dusty, bone-dry field.

I want to know, so I ask again: what will happen to the community if it doesn’t rain? A pause, as Farah’s eyes pan across the scattered thorny shrubs next to the field.

“We will make charcoal. Then when our last trees are gone, I don’t know.”

This story was originally published Dec. 2017 on WFP’s Insights.

More than 80% of the world’s hungry people live in disaster-prone countries. Check out our Climate Change & Hunger hub for all the stats, stories and solutions.

Go to Hub
It looks like you're outside of the United States.