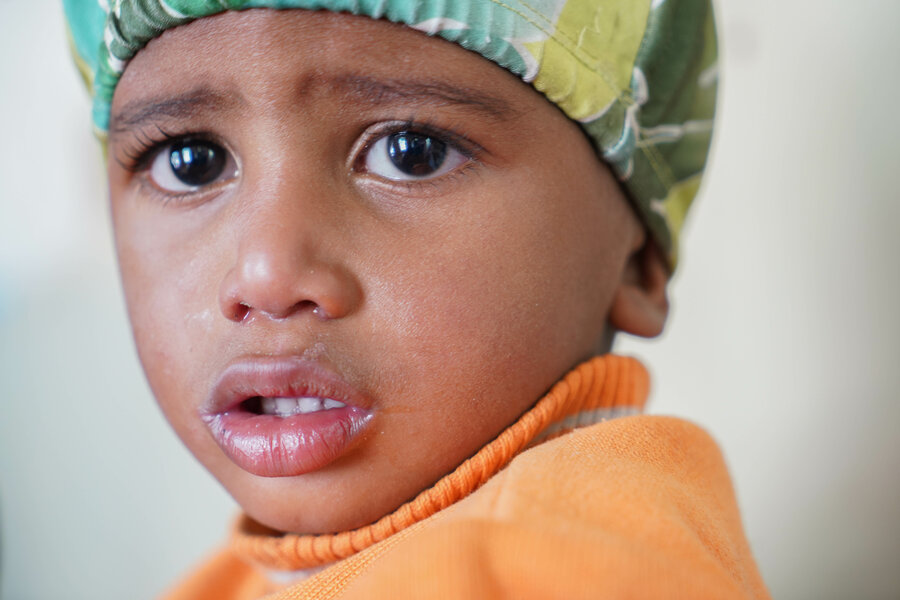 On the Brink Again: In Yemen, Safiah’s Family is One of Millions Trying to Keep Hunger at Bay

Six years of conflict have taken a devastating toll on millions of people, and now famine is a stark reality without urgently needed funding.

“Our children are more important than us,” says Safiah who often skips meals so her children can eat. “I do not feel hungry when my children have their meal … if they are full, I feel full, and if they get sick, I get sick, too.”

In the summer of 2020, Safiah watched in agony as her son, Sultan, became acutely malnourished. Severe acute malnutrition – or SAM – is one of the most dangerous forms of hunger. Safiah’s husband, Arafat, was struggling to find work at the time as COVID-19 ravaged war-torn Yemen and the family could barely afford two meals a day. 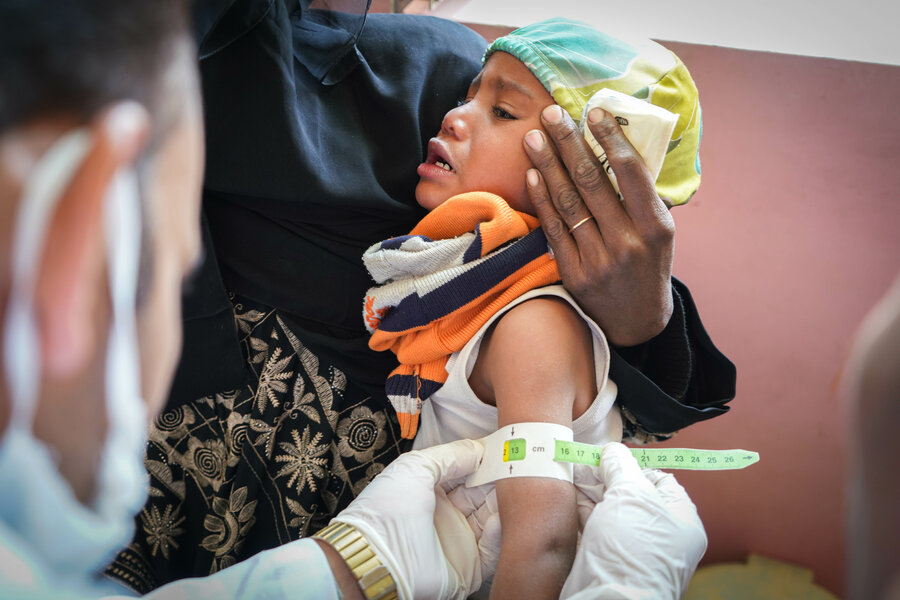 At a mere 13 months, baby Sultan was at risk of losing his future. Fortunately, Sultan’s family lives near a nutrition clinic supported by the United Nations World Food Programme (WFP).

Safiah and Arafat took Sultan to the clinic where he was enrolled in the malnutrition treatment program. With regular nutrition support, Sultan’s health slowly began to improve.

By September 2020, he was classed as a case of moderate acute malnutrition – an improved state but still a serious form of malnutrition that can impair a child’s physical and cognitive development. By early 2021, his health was full recovered and, to his parents’ great relief, was discharged from the program.

Conflict has blighted the life of Sultan and countless others in Yemen.

“When the doctor told me that my son had recovered I was relieved and very happy,” said Safiah. “At that moment, I wanted to hug my son tightly and now he laughs with me. Now, thank God that he is well, and I sleep at night a little bit.”

The threat to Sultan and his siblings remains, however. A critical shortage of funds means the U.N. World Food Programme can only provide the family with food assistance every two months instead of the usual one. Their meals of flour, dried beans, oil, sugar and salt last an average of four weeks.

“If I have money, I start by buying food before anything else. Food such as vegetables, rice, fish,” explained Arafat. “I care about [my family] as much as I can, more than I care about myself. 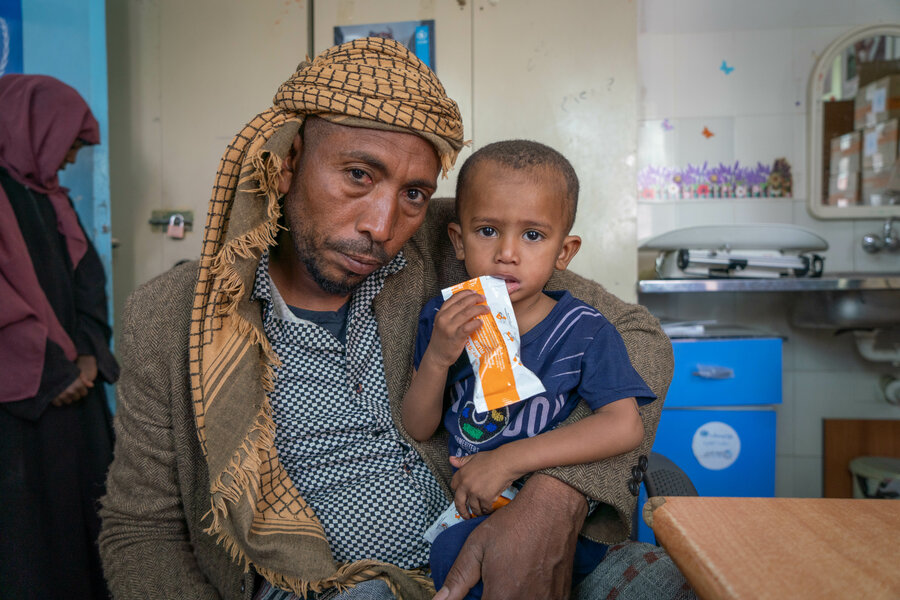 “For example, if I wished to take anything for myself, I do not take it,” Arafat said. “Even if I work outside the whole day, I do not buy lunch.”

Yemen today stands on the precipice, with six years of conflict taking a devastating toll on millions of people. A total 50,000 are facing famine-like conditions, with 5 million a mere step away from this worst-case scenario. A further 11 million people are facing crisis levels of hunger. In 2021, around half of all children under 5 in Yemen – 2.3 million – are projected to face acute malnutrition like Sultan. 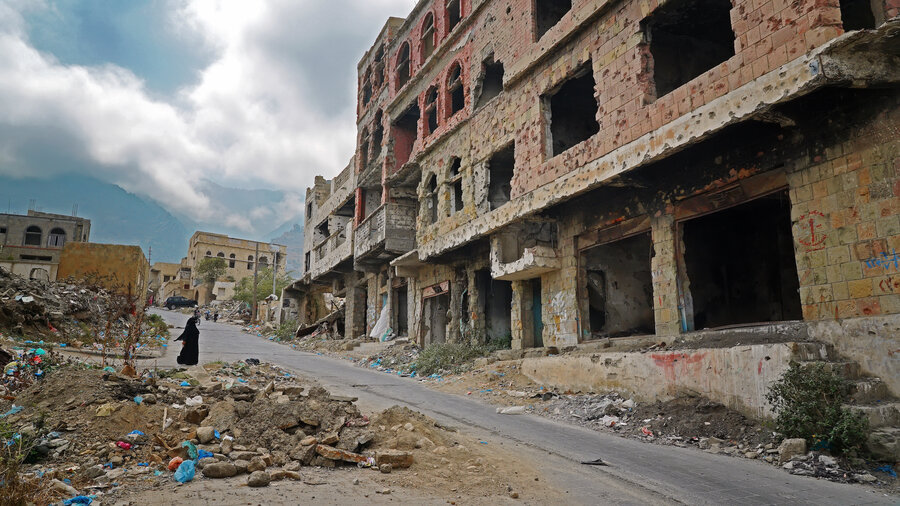 Six years of conflict has left a terrible toll on Yemen and its people. When the war broke out, Safiah and her family lost their only source of income and headed east to Sana’a.

The greatest concern Arafat and Safiah have is the health of their youngest and most vulnerable child. They want to be able to look ahead and take it for granted that Sultan will be assured of his next meal – and of his future. 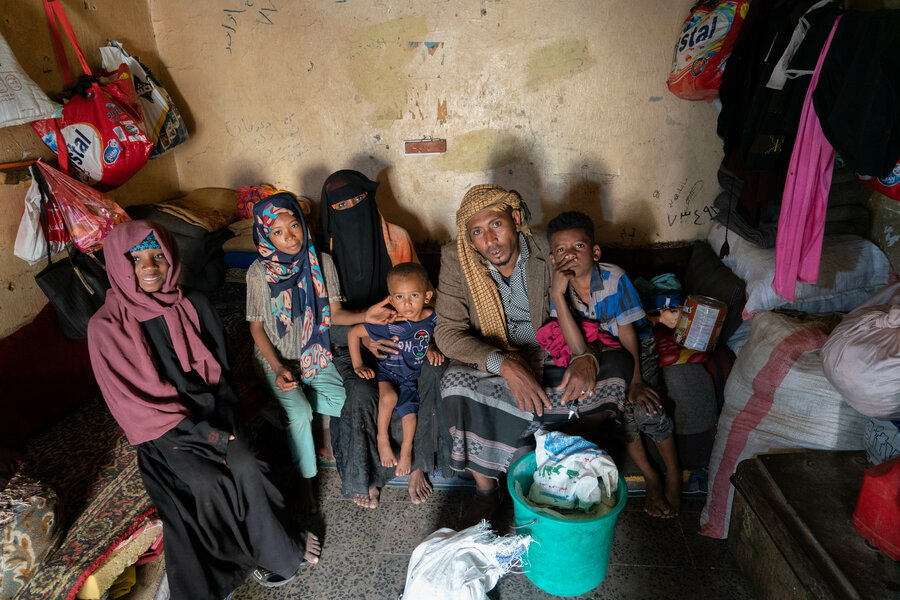 Safiah and her family rent a single room for $70 per month.

Safiah also worries for her children’s education and future prospects. Her own mother supported her through high school, and she hopes she can do the same for her children, who are now attending school again. Sultan will join them when he’s old enough.

“I studied and graduated from secondary school, but I wish that my children fulfil what I could not achieve,” she added. ”That is, they graduate and finish university and recompense us for the pain we have had.”

In 2019, famine was averted in Yemen thanks to humanitarian aid agencies and donors stepping up to meet the challenge. With enough support and resources, we can prevent it again.