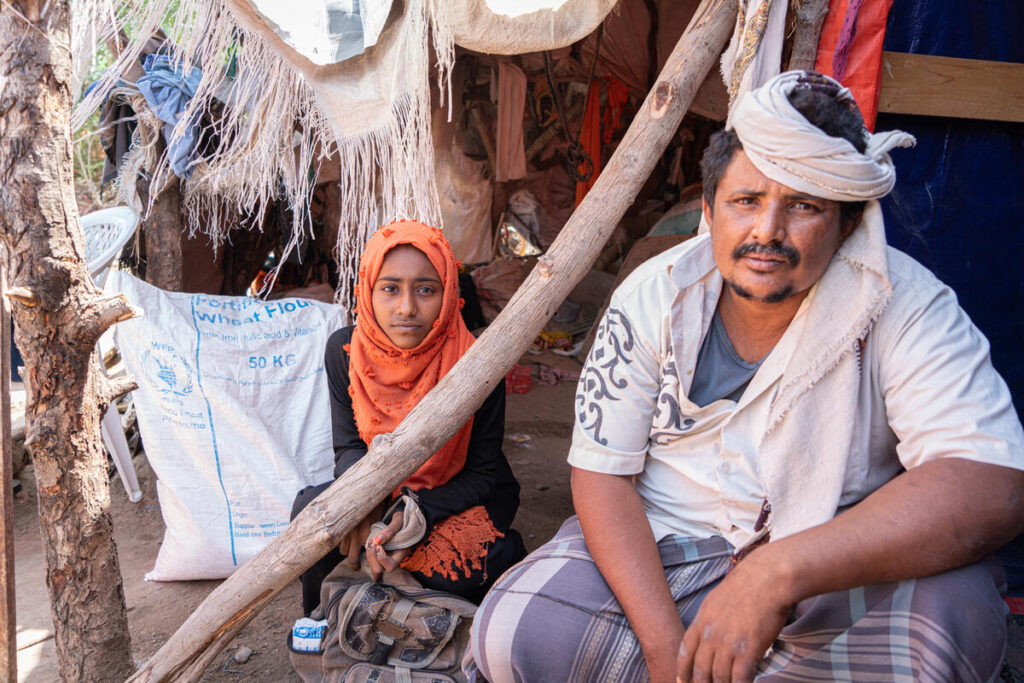 This Father’s Day, We’re Honoring Dads Around the World Fighting to Feed Their Kids

It’s Father’s Day in the United States – a day we set aside every year to honor dads across the country. Fathers can be our defenders, our champions, our guides – even more so in the worst of times. But a father’s role changes when his family is displaced, when he’s living through conflict, or when he can’t find food for his children.

The United Nations World Food Programme (WFP) supports fathers all over the world, in more than 120 countries and territories, who are doing everything they can to protect and feed their children.

Meet eight dads from eight countries who are overcoming the kinds of challenges many of us can hardly imagine in order to feed their families. 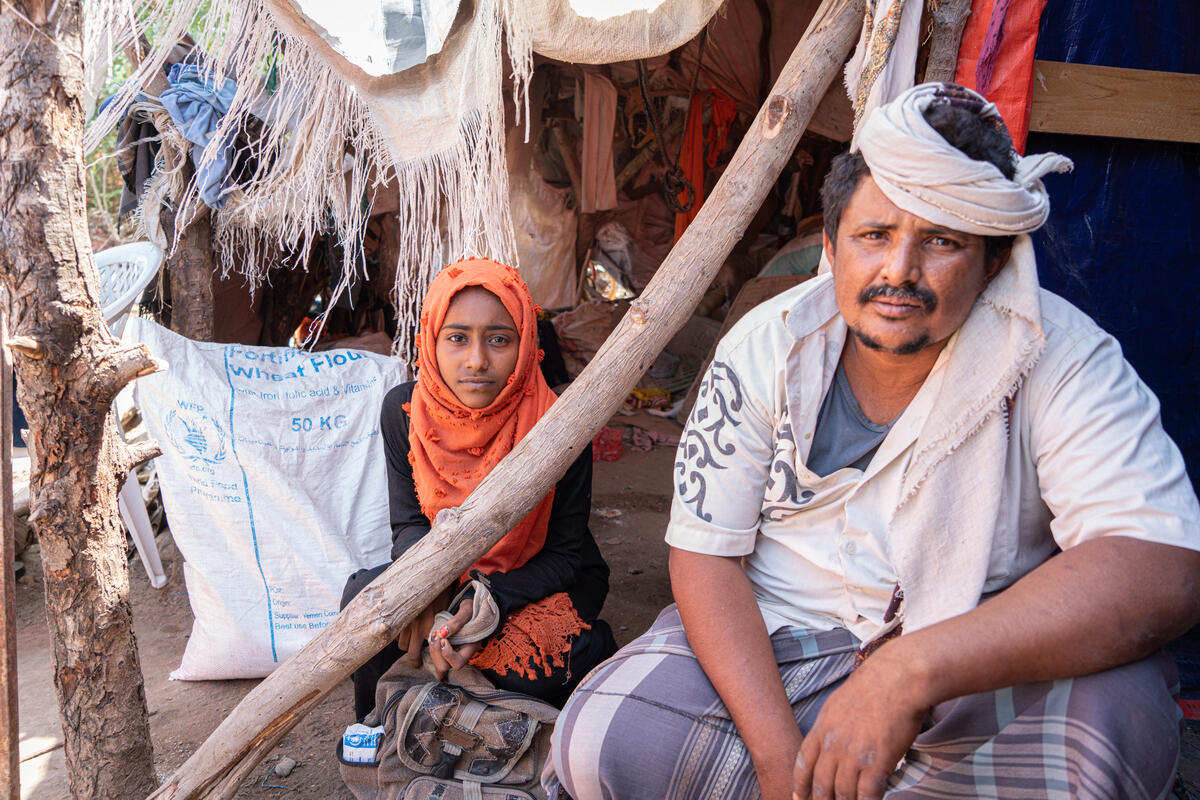 Security is not to feel safe from the war, but it is about having food and flour at your home,” said Ali.

Ali Ibrahim lives in a camp for internally displaced persons in Mokha with his two children, Tamim and Bayan. Ali and his family were forced to flee their village three years ago due to conflict, the sound of gunshots filling the air as they ran for safety. His country is facing a brutal civil war that is still pushing millions of people out of their homes to the brink of famine.

Without work, Ali has been unable to provide for his children. Between food assistance and school meals from the U.N. World Food Programme, he and his children have the nourishment they need to carry on. Like many parents, Ali dreams of his children building lives for themselves beyond their home in the camp.

“I want them to study, be doctors and teachers, and have a bright future,” Ali said. 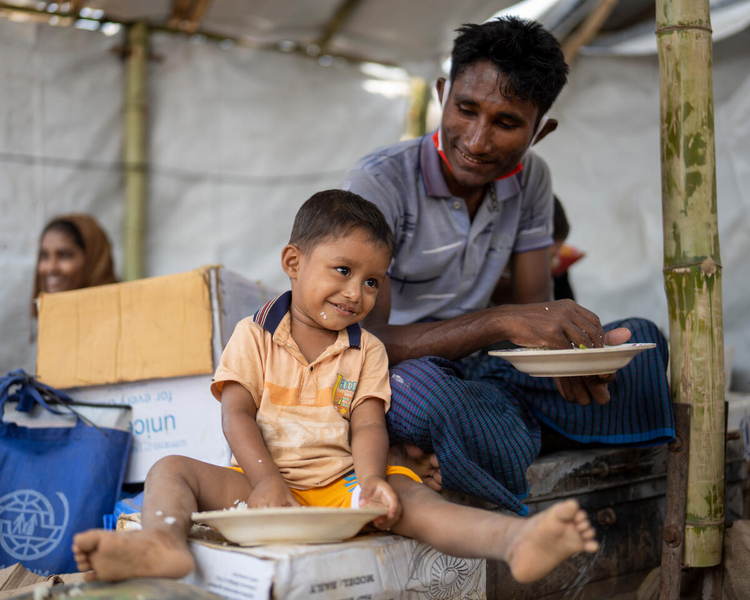 Little Aziz smiled as he playfully struggled to balance his food in his little hands.

Taking only what they can carry, thousands of people are fleeing violence in Myanmar’s northern Rakhine State – seeking shelter at the Bangladeshi border. They arrive at already overcrowded camps, hungry and desperate, looking for somewhere to take shelter.

When a fire broke out in one of the camps in 2021, over 10,000 refugee families were left with no shelter or food. The U.N. World Food Programme gave those affected by the fire, like Dildar Hossain and his then two-year-old son Ajiz, emergency meals to cover their immediate food needs.

Food distributions provide solace – and a bit of relief – to fathers like Dildar. 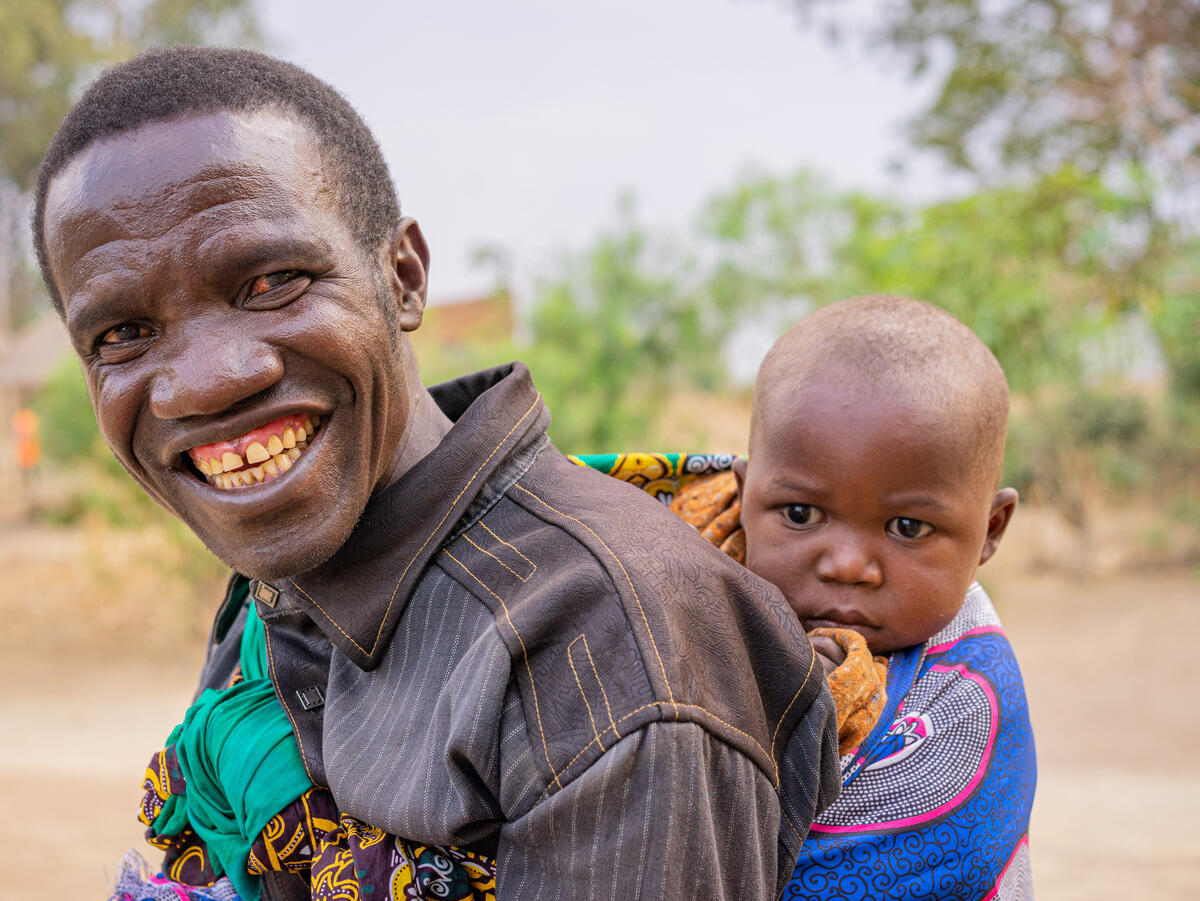 Wyson on his way to a nutrition clinic with his nephew Chifundo.

Caregivers of all walks of life fill the role of “dad” for the world’s youth. For little Chifundo, his uncle Wyson fills that role by taking him to the local health center and collecting nutrition supplements to nurse him back to health from malnutrition.

Father and Son in Mozambique 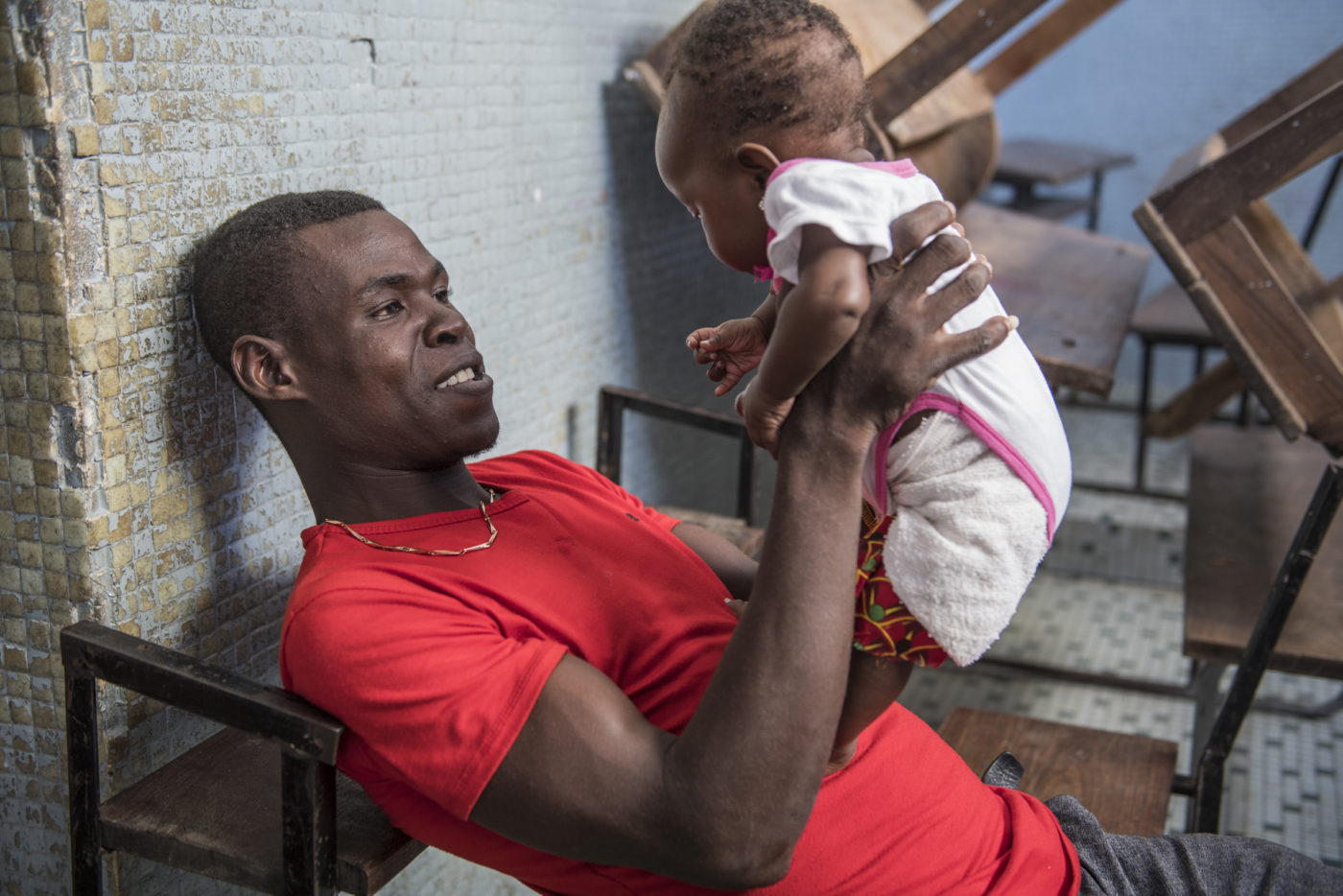 This pair was displaced from their home in Praia Nova, Mozambique.

Increasingly extreme weather around the world is another reason fathers are having to flee their homes with their families. In 2019, a primary school in Beira, Mozambique was forced to take in nearly 3,000 people who were displaced from a nearby fishing village during Cyclone Idai. The entire area was destroyed, including the fisheries.

The U.N. World Food Programme teamed up with a local NGO to provide warm meals to hungry people, like this dad and his baby, who lost their house to the cyclone. 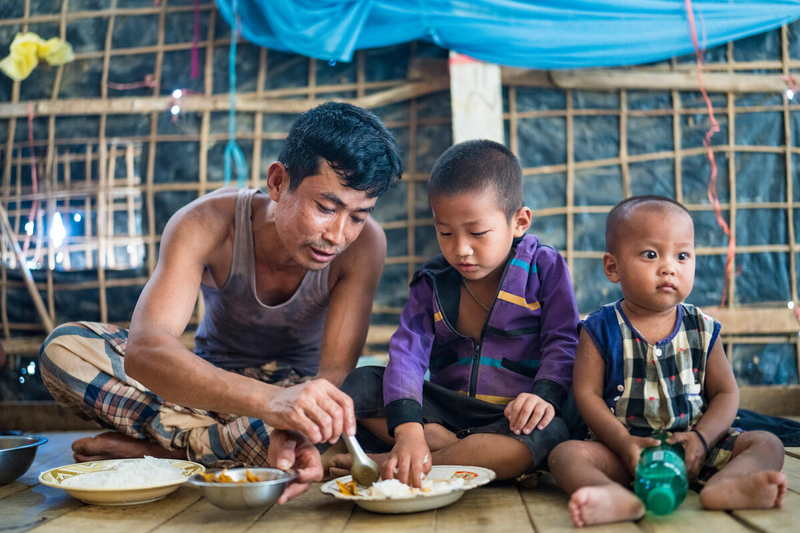 Kimonching Chakma had lunch with his two sons.

By providing meals, cash grants, job trainings, small business support and more, the U.N. World Food Programme is helping parenting duos – like the Chakma’s – in hunger hotspots across the globe.

Kimonching’s wife, Taimy Chakma, enrolled in a U.N. World Food Programme livelihoods project where she gained access to business trainings. Today, Kimonching supports Taimy on the farm while she runs a successful agriculture and livestock business. 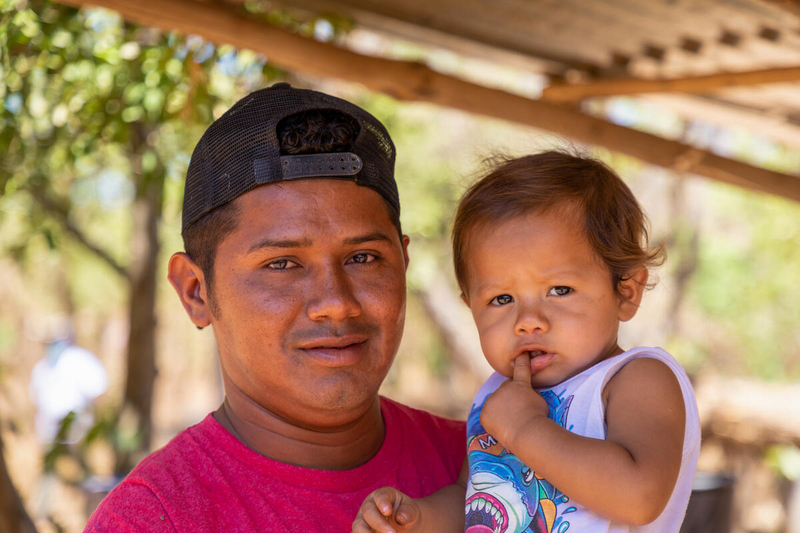 When we met Erick Galeas last year, he was living with his partner Brenda and then 1-year-old son Dilan in the drought-stricken community of San Miguel. He had finished his degree in agronomy and dreamed of earning a higher degree in agricultural engineering.

Without a steady stream of income though, his dreams of education not only for himself but for his son as well remained just that – a dream. Instead, Erick was considering migration to build a safe home and brighter future for his family elsewhere. 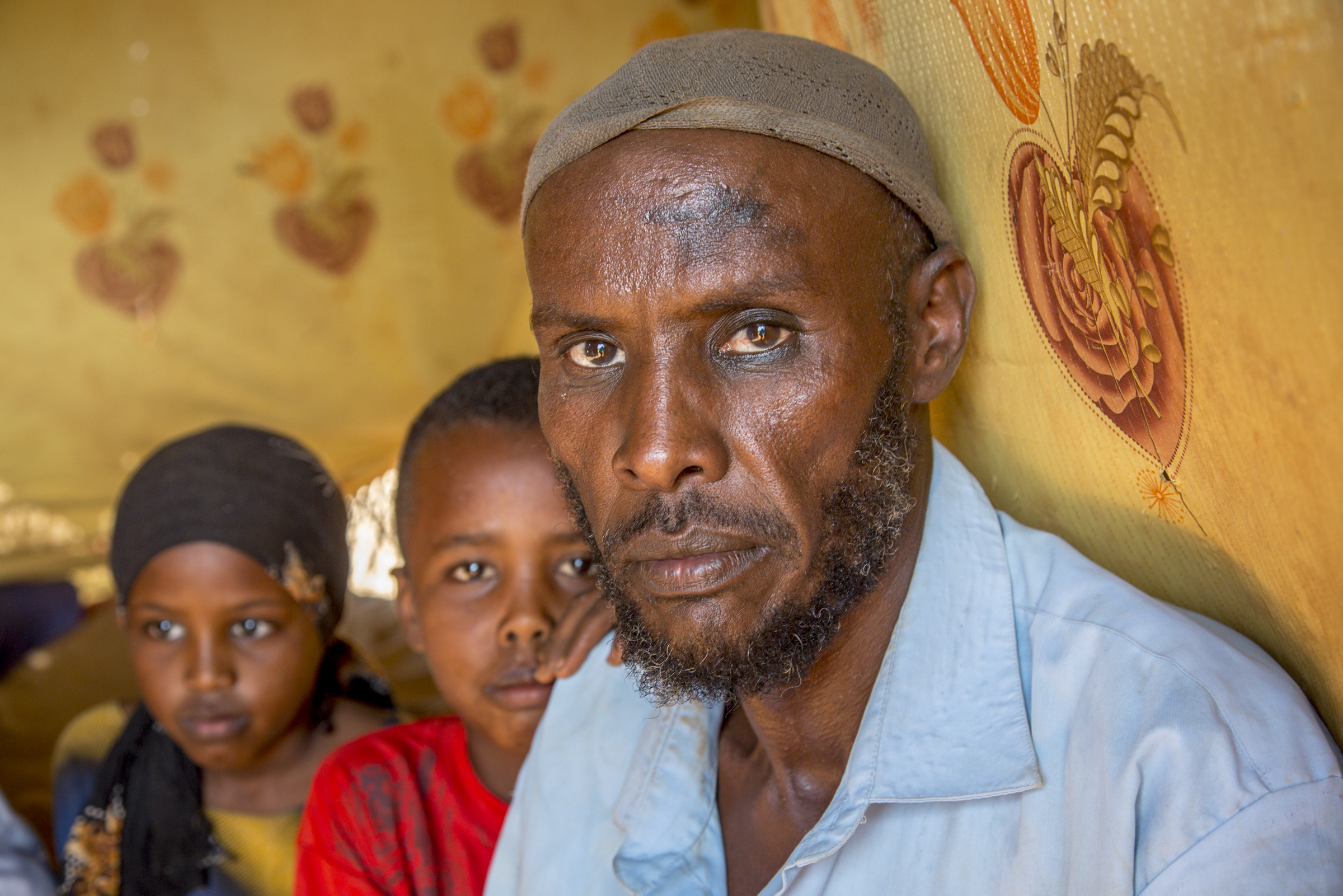 Mohamad with two of his children in Kabasa IDP camp.

Mohamed Adan Salat, fleeing fighting in his home country Somalia, found refuge in Kenya’s Dadaab refugee camp – one of the largest in the world. He met his wife Fatuma there: they stayed for nearly 20 years and had nine children. When Fatuma was four months pregnant, they moved to the Kabasa Camp back in Somalia hoping to find a better life for their family.

With food support from the U.N. World Food Programme, the family can still observe Ramadan in the new camp with what little they have. Mohamed is just one of millions of fathers in Somalia who rely on us to keep his growing family fed. 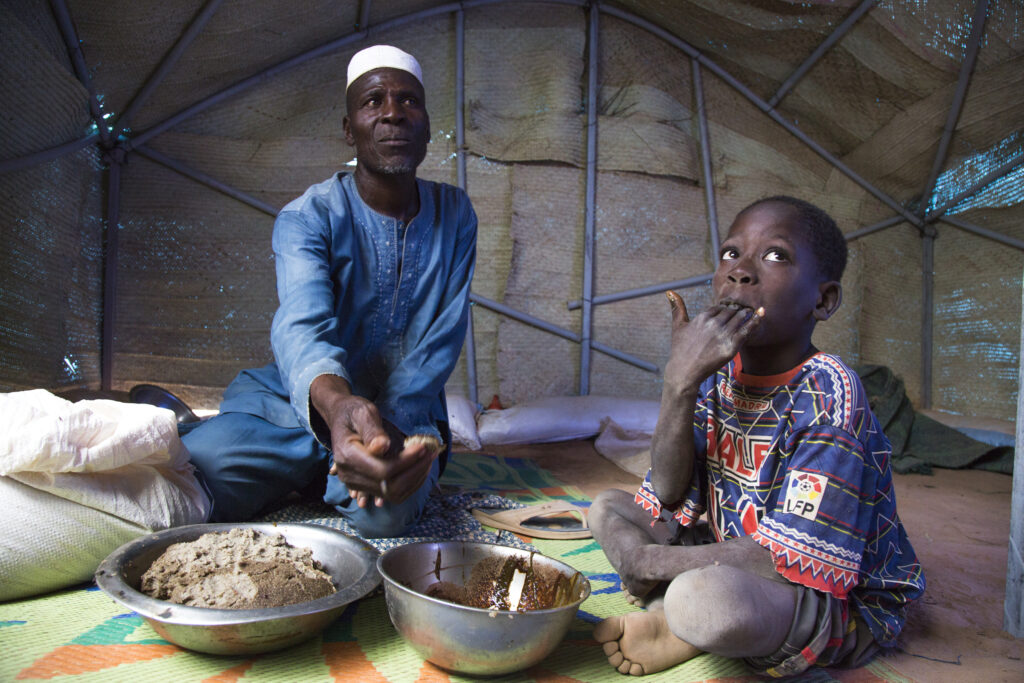 Zore shared tô de petit mil, a local delicacy made with cooked millet flour, with one of his children.

Armed conflict forced Zore Yusef and his family to flee the northern region of Burkina Faso. One of his brothers was killed in the fighting, but he and his family narrowly escaped – arriving at a refugee camp with nothing but the clothes on their backs. He says that for him, the number one priority is having food to feed his children.

If you can imagine the challenge of trying to keep your family safe in any of these circumstances, please join our crucial work.