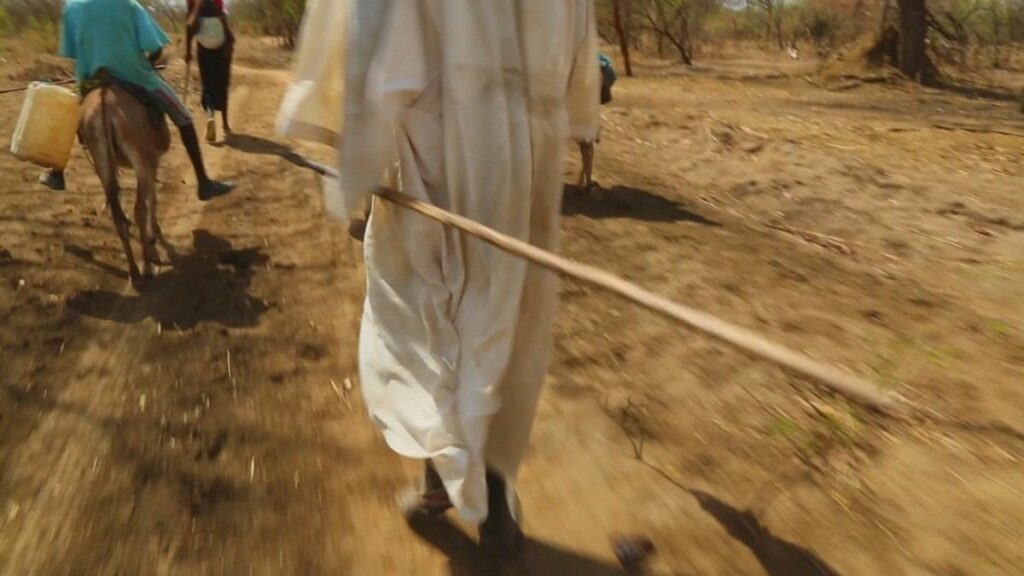 Fleeing South Sudan: The Story Behind the Story

One day in May, some colleagues and I found ourselves deep in the South Sudanese bush, in the middle of nowhere, somewhere near the border with Darfur, Sudan. That’s when we spotted a woman walking with a baby strapped to her back. She was trailed by a couple of small, tired-looking children on donkeys and a man on a bicycle. Behind them followed a tall man with elegant features, dressed magnificently in what can only be described as an enormous white cloth. WFP/Jonathan Dumont
To reach Darfur, Apu Riang and his family need to walk for two weeks, day and night. 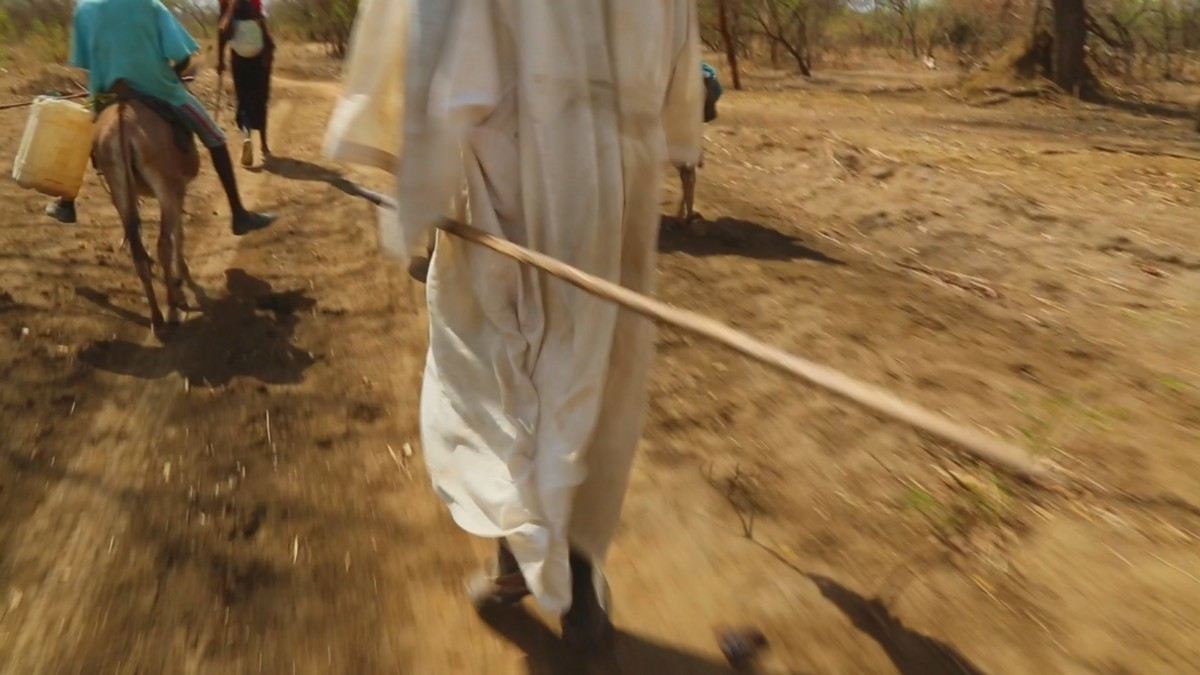 The tall man’s name was Apu Riang. Apu didn’t walk, he strode, driven by a force we couldn’t possibly understand. He carried a spear at his side which pieced the air determinedly in front of him in time with his steps. He told us the spear was for lions. I am Head of TV Communications at WFP, and I frequently find myself in remote corners of the world like this. That’s where many of the 80 million people we help each year happen to be. WFP’s strength is getting food to people in places that, like this, are difficult to reach, places where people don’t have access to food for any number of reasons, be it drought, war, floods or high food prices. Often, the hardest people to reach are those who have been forced to make the most difficult decisions anyone will ever have to make: whether or not to leave their homes and farms and face an uncertain and most likely dangerous future. They must also decide who and what to bring — and who and what to leave behind.

These decisions were what was tearing Apu Riang up inside. Like millions of other returnees who answered the call in 2011 after South Sudan gained independence from Sudan, he came back to his ancestral land to build the world’s newest country. Returnees were taught to farm and given land and tools.

If our feet leave the earth, we no longer have peace.

But the conflict, economic collapse and drought that followed prevented them from constructing a country with productive farms, roads or markets — all the things a nation needs to function. For Apu and millions of other South Sudanese, the dream was put on hold. Drought killed their crops and stole their money. Fighting hunger became a full time job. WFP/Jonathan Dumont
Apu’s children make the journey with their parents.

For Apu and his family, it was time to go find food someplace else. Apu’s wife was pregnant so leaving her and his children behind to starve was not an option. That is when we saw him and his family walking to Darfur to find food. Can you imagine? Conflict and rising food prices have left an estimated 4.5 million people in Sudan facing uncertainty about where their next meal will come from, with two thirds of them in Darfur. And yet, there Apu and his family were, making a two-week journey to Darfur on foot, day and night.

WFP has found a clear link between food insecurity and migration. Although people’s initial reasons for migration might differ depending on the country and circumstances, migrants and refugees tend to seek the same fundamental objective: to find safety and adequate living conditions. WFP provides food assistance in countries of origin to ensure that food insecurity is not the reason that people leave. We are working to strengthen peoples’ livelihoods and food security in their home countries so they’re not forced to flee.

Watch the video if you haven’t yet. View it in full screen, and in high definition (HD) if you can. Watch Apu when he speaks. This is not a person who gives up easily. This is a man who has made the most difficult decision of his life. Then consider that there are millions of people like him around the world: people who love their homes but who need to eat, and so are forced into exodus. Their feet have left the earth, and they no longer have peace.

This piece originally appeared on insight.wfp.org.