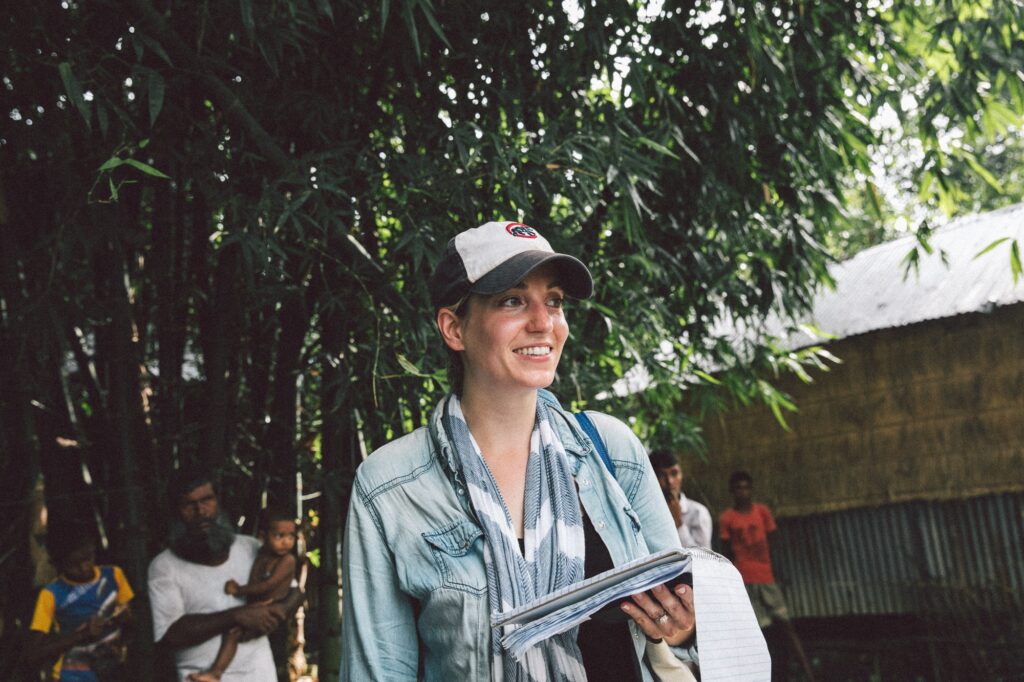 How We Got to Season 2

M.J.: “I’ll be honest, when I first started this podcast, I dove in headfirst without knowing exactly what I wanted Hacking Hunger to be. 2016 was a year of experimentation, figuring stuff out as I went. When I go back and listen to some of our first episodes, I’m really struck by how different I sound. Frankly, I didn’t sound like myself. And it took me 12 episodes to start to find my real voice.”

She learned a lot over the last year, talking to people directly impacted by hunger as well as journalists, students, aid workers and everyday Americans who are choosing to care about hungry families.

Listen to the full episode below.

From Ethiopia to Syria to Haiti, the work of the World Food Programme (WFP) took her on a journey that brought into focus the power of food to shape a person’s destiny and dreams.

M.J.: “Along the way, I started to realize the kind of story I wanted to tell. They were stories about people and the surprising, beautiful, hidden moments that reveal themselves when you try to understand the experience of hunger.”

One such beautiful moment took place under a tree two decades ago. Fleeing the Rwandan genocide in 1994, Cedric Habiyaremye — featured in Episode 5 — became a refugee in Tanzania at just eight-years-old. One day he was sitting with his brother after having had nothing to eat for two days. His mother came over to him.

CEDRIC: “I remember the day my mom called me and my brother and she realized we were desperate and she said, “I have something to tell you. I see you lost hope for life. It feels like you are desperate, but this is not the end of the life. I can see you have potential and you can do something great and you are the future of this country. You can save the world. You can save people’s lives.” And I left the house and went under the tree and cried a lot. My brother came and sat next to me and said, ‘Maybe she’s right. Wait and see.’ And I was like, ‘Okay. So then, if then she’s right, if we survive, what do you want do when you grow up?’ He asked me what I want to do and I was like, ‘We are hungry and we don’t have food and we see people around us have the same problem, so maybe I would study agriculture and learn how I can teach farmers how they can make the most of their land.’ I remember that conversation I had under the tree, that’s when I decided what I wanted to do, but I was young and I was dreaming big.”

Another one of M.J.’s highlights from Season 1 explored the intersection of food, culture and conflict. She talked to Syrian-American journalist Dalia Mortada — featured in Episode 14 — about her project Savoring Syria.

Last year, Dalia invited a Syrian refugee chef named Mahmoud to host an event in Washington, D.C. to cook and share food from his homeland as well as share his perspective on the people and culture of Syria to challenge stereotypes created by anti-refugee rhetoric.

DALIA: “Everyone understands food. Everyone’s gotta eat, most people enjoy eating and so that’s a really great way to do it. Mahmoud himself has said that. What moved me about him and what made me say, Ok, I have to meet this guy is, He said, ‘I want Americans to understand that we are peaceful people, we are not people who wanted this war. We are not ISIS. We are not violent in any way. And I want to present my food as a way to show that.‘”

Help M.J. shape Season 2 of Hacking Hunger. Email her at hackinghunger@wfpusa.org and tell her what you think are the hidden, human stories about food on the front lines of hunger that need to be told.