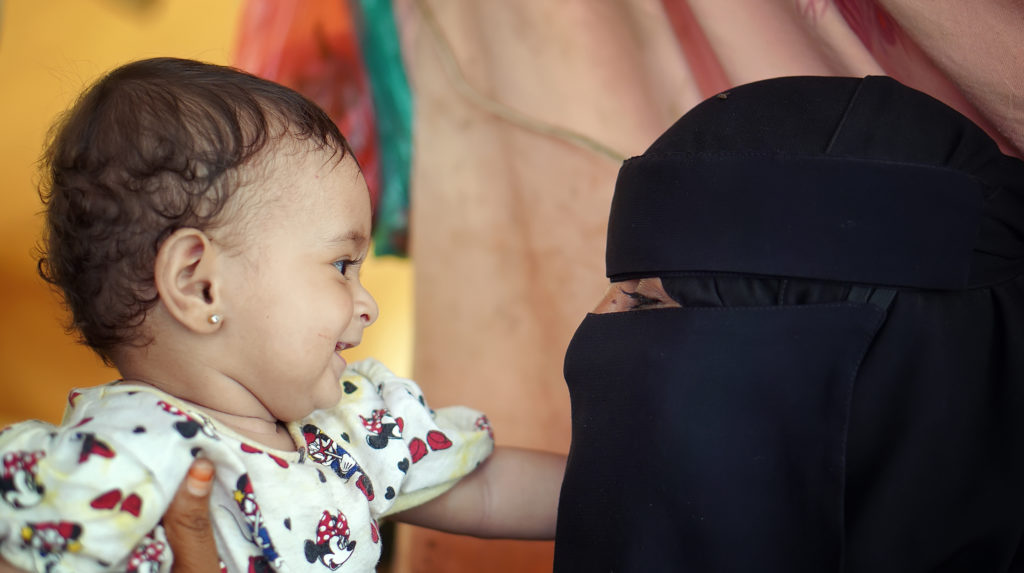 Hunger is cruel to everyone, but it’s not completely blind. Women – especially in times of war – are more at risk to the suffering it bestows. Women are 60 percent more likely to suffer from hunger and its consequences. They eat last and least and are often forced to drop out of school or marry early when there isn’t  enough food.

Yemen is no exception to this rule, and as the nation’s conflict drags on, women find themselves in increasingly difficult circumstances. But women are resilient, and despite their suffering, they find ways to remain hopeful and strong.

On this episode of Hacking Hunger, we spoke with Annabel Symington, head of communications for the United Nations World Food Programme (WFP) in Yemen. She’s been working in Yemen for the past year, and offered us insights into the unique challenges, stories and strength of women living through this war.

“Probably my most favorite part of my job is going to the field and talking to the women that the U.N. World Food Programme supports,” Annabel told us over the phone one morning. “Every day, women in Yemen encounter overwhelming adversities. But the strength and resilience – and the amazing kindness – of women in Yemen gets me every time. I’ve heard many heartbreaking stories, but I’ve heard many heartwarming ones as well.” 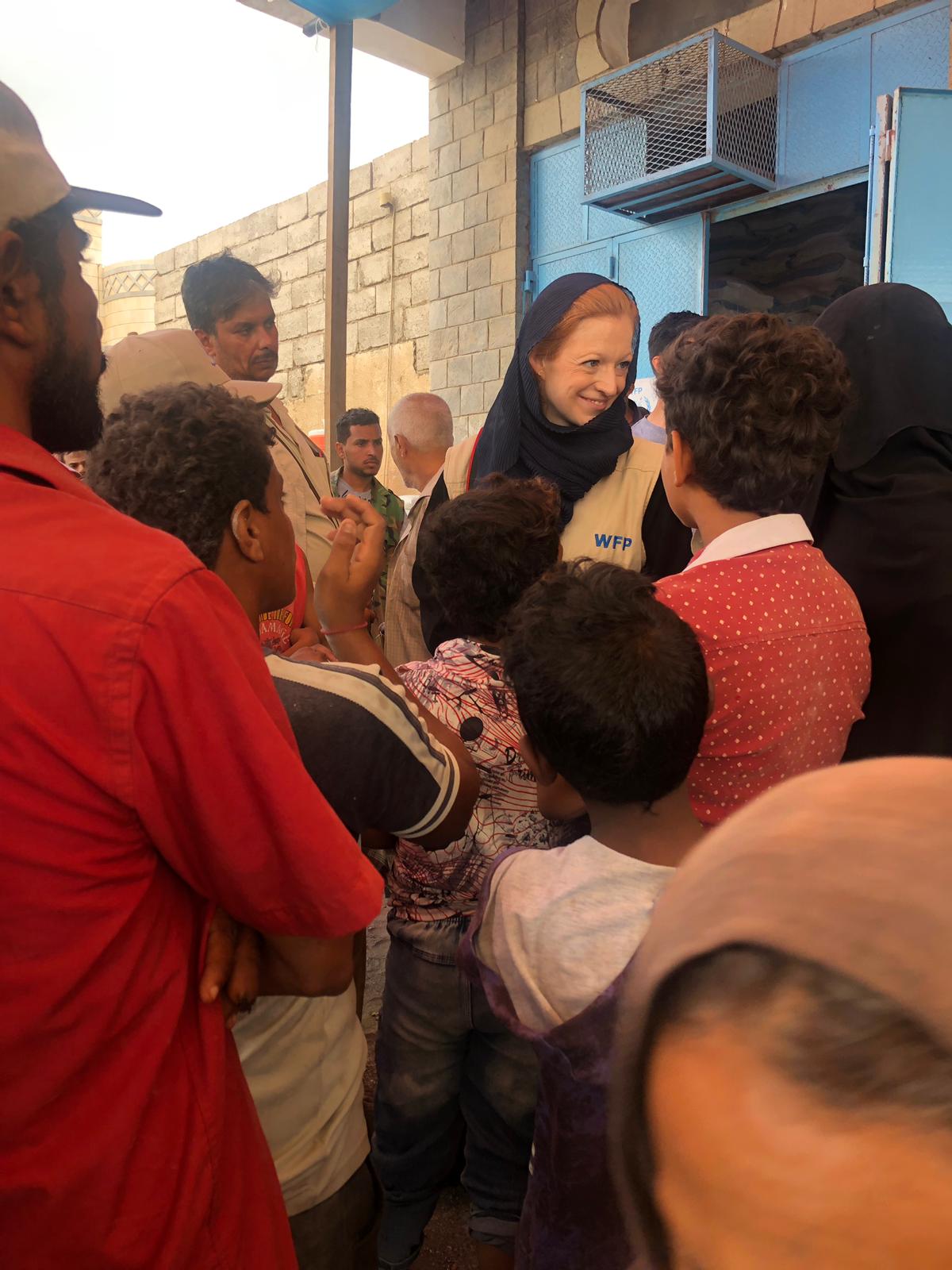 In Yemen, women and girls face challenges similar to women in any vulnerable country: pregnancy makes them more susceptible to malnutrition and their role as caregivers can make them overly sacrificial. But Yemen’s war has burdened them with additional challenges as well. Fleeing violence, women have lost their communities and thus critical support systems, and too many girls have been forced to drop out of school because it’s something their family can no longer afford.

“For women and girls, education has always been a challenge in Yemen,” Annabel said. “Girls tend to drop out when they hit puberty or when they get married – and unfortunately, many girls get married very young here. Before the war, there had been progress and more girls were staying in school, but now much of that progress has been reversed.”

Hannan’s story exemplifies this problem. Hannan was just 17 years old when Annabel first heard her story, and she’d been out of school for three years. War had made school unaffordable, so Hannan stayed home to care for her mother and siblings instead. She spoke with sadness when asked about school. 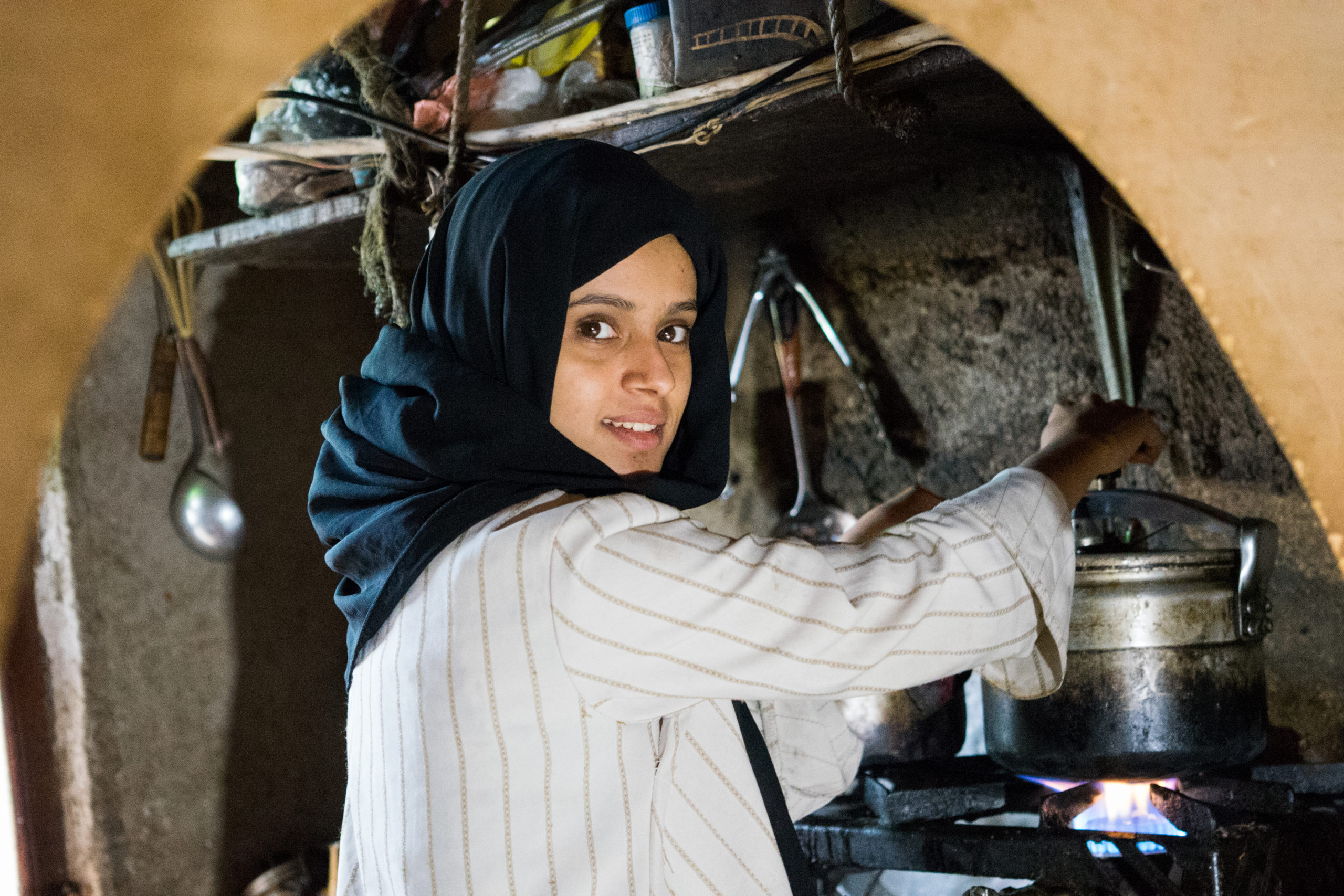 Hannan at her home last year.

“Hannan never thought her life would turn out this way,” said Annabel. “She had dreams, she loved school – but war upended everything.”

A few months later, Annabel got a message from a colleague that Hannan had gotten married. “She showed me pictures of her wedding day. Hannan looked beautiful,” Annabel said, “but it’s heartbreaking because she was so very young. And unfortunately, I hear stories like this all the time.”

The U.N. World Food Programme is working to make these stories less common by supporting school feeding programs that help keep girls in school. The free snacks give parents incentive to send their children to school, as they otherwise might not be able to feed them on their own. The U.N. World Food Programme is currently scaling up to reach 1.2 million kids with nutritious snacks, and it’s just started a pilot program to reach kids in school with sandwiches and fresh fruit. 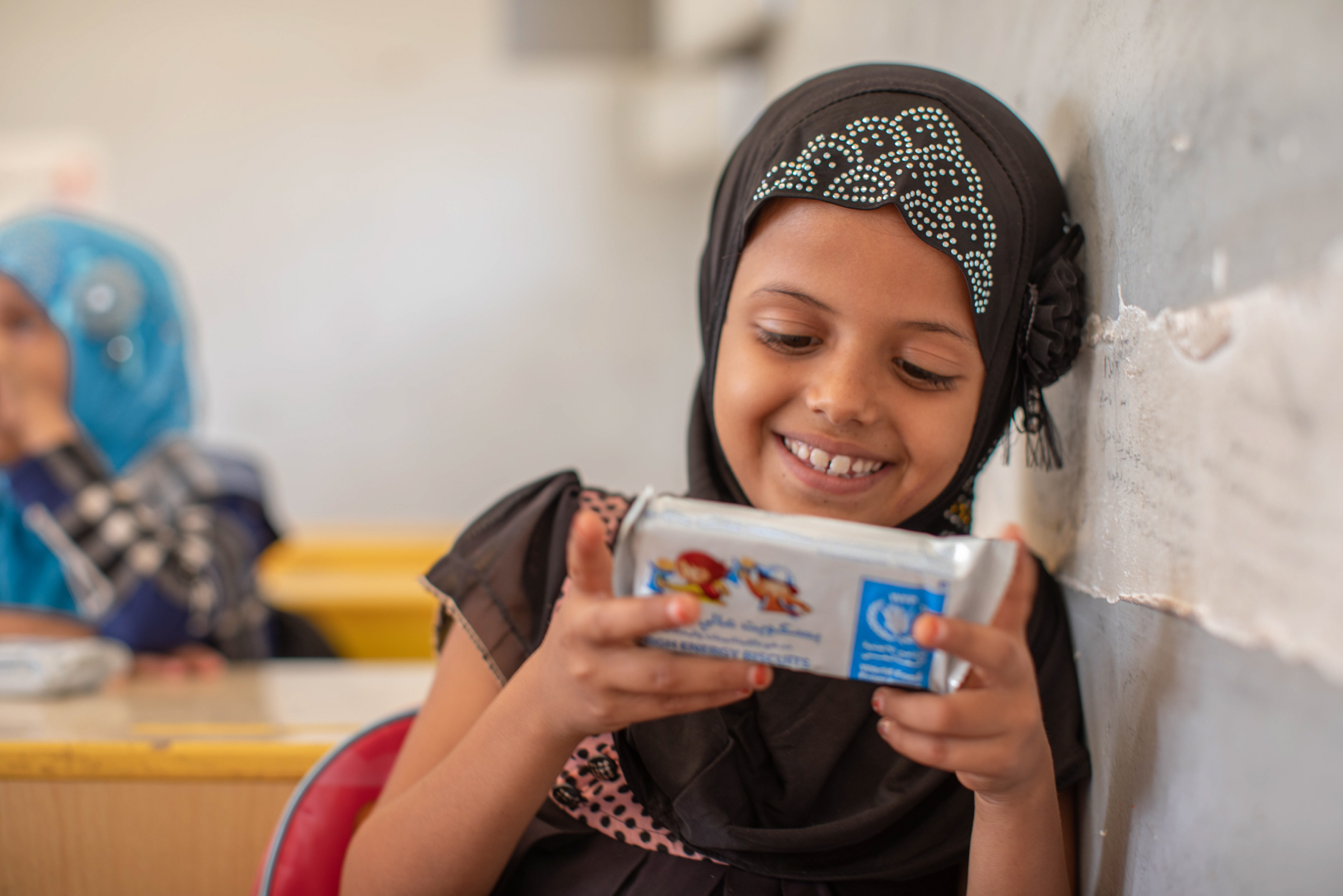 A young girl holds a school snack provided by WFP to her school in Yemen.

“What’s lovely about this program is that all the ingredients will be locally sourced – giving local markets a much-needed boost,” Annabel said. “Also, the sandwiches are carefully developed to meet a child’s unique nutritional needs and prepared by women in the community. This will give women employment and a salary. We’re really excited about this program and hope the pilot is successful so we can expand to other parts of Yemen.”

Among women, mothers are particularly vulnerable to the hardships of war. Last spring, Annabel wrote a story highlighting the story of Hossn, a young mother who was so malnourished, she struggled to produce enough breastmilk for her five-month old son.

“Unfortunately, Hossn’s story is also all too common,” Annabel said. “I see this happening frequently in Yemen – part of it’s malnutrition and part of it’s stress…Last week, I met a mother of three at a clinic in Aden. She’d had no problem breastfeeding her first two children, but she couldn’t seem to produce enough milk for her third. As a result, her daughter was acutely malnourished. It was devastating to see the incredible stress she was under, and her sadness in not being able to feed her daughter.” 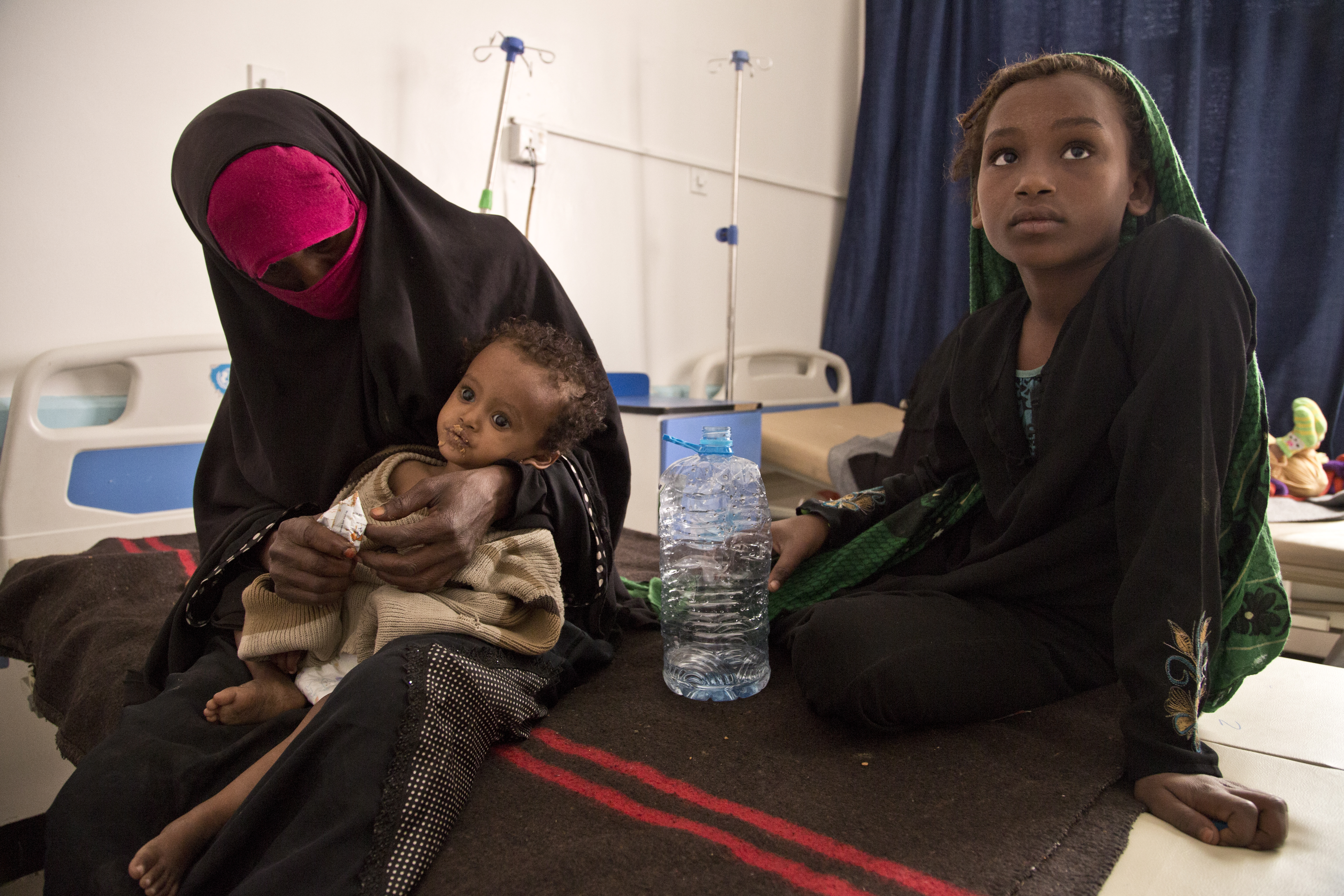 A mother holds her malnourished child at a hospital in Yemen.

Mothers are often more vulnerable to hunger because they sacrifice the food they need to ensure their children can eat. But in Yemen, even when mothers give up everything, there are times when they still can’t provide their families with enough – a burden that takes a heavy toll.

“Recently, I met a mother named Nasreen who was living in an internally displaced persons (IDP) camp with her children,” said Annabel. “Flour here is sold in bulk. You buy a bag for a month. But Nasreen said she can no longer afford to buy a whole bag. Instead she’s buying bread every day. In the end, this ends up costing more and her family is getting less. But without enough money at her disposable, she doesn’t have a choice.”

“Nasreen told me that the other day that she asked a shopkeeper what she could buy with 100 rial,” Annabel continued. “He laughed at her and said ‘nothing.’ Can you imagine how she must have felt at that moment? 100 rial is less than twenty American cents. And because of this war, that’s all she has to feed her children. It’s not enough.” 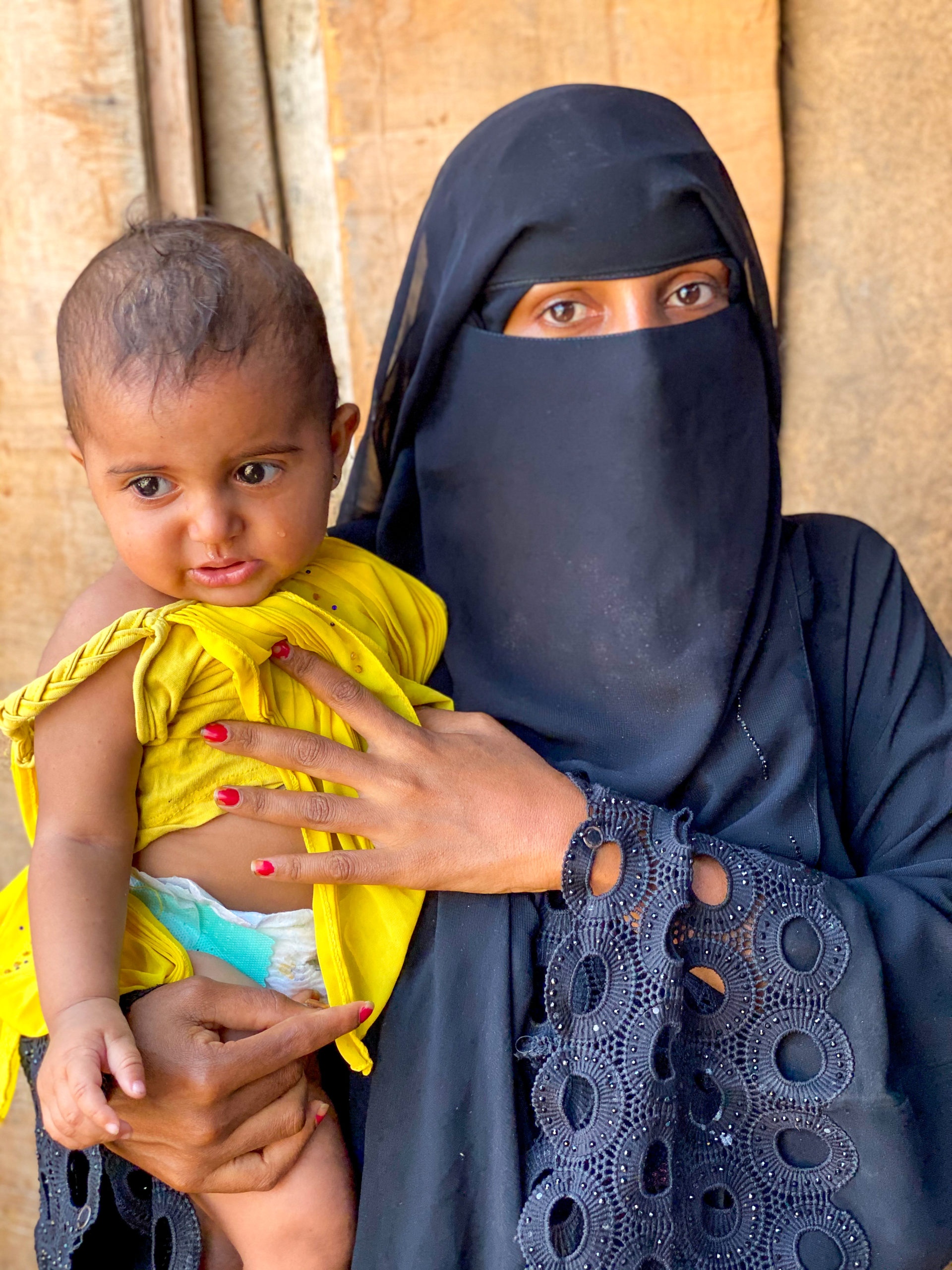 Nasreen and her child.

Having enough to eat is critical for any child, but it’s especially important for children age two and under. Not having the right nutrients in the first 1,000 days can have a detrimental impact on the rest of their lives. To prevent as many women as possible from having stories like the above, the U.N. World Food Programme runs nutrition centers in Yemen that target pregnant mothers and young children with special nutritional support.

“Our goal is to reach every pregnant woman and mothers of children under two, but it’s obviously a huge challenge,” Annabel said. “Yemen is an active conflict zone so consistently reaching women is difficult as a mother might be able to get to a nutrition clinic one month but the next month, she doesn’t have money for transport or front lines have moved so she can’t travel at all. But we’re doing our best and currently serving around 3 million women and children. Support for mothers is absolutely core to our work here.”

War weighs heavily upon women in Yemen, but despite the pain, it does not crush them. Among their stories of suffering are also stories of resilience, hope and strength.

“I come across amazing stories of perseverance all the time,” Annabel said. “One that comes immediately to mind is Nawal who is an IDP from Hodeidah and now lives in a camp near Aden.”

Nawal is a trained midwife who ended up in the camp after fleeing violence in her hometown. Even though she left everything behind when she fled her home, she didn’t leave her desire to help women. She continues to deliver babies for women displaced by war and refuses to accept any payment for her help. 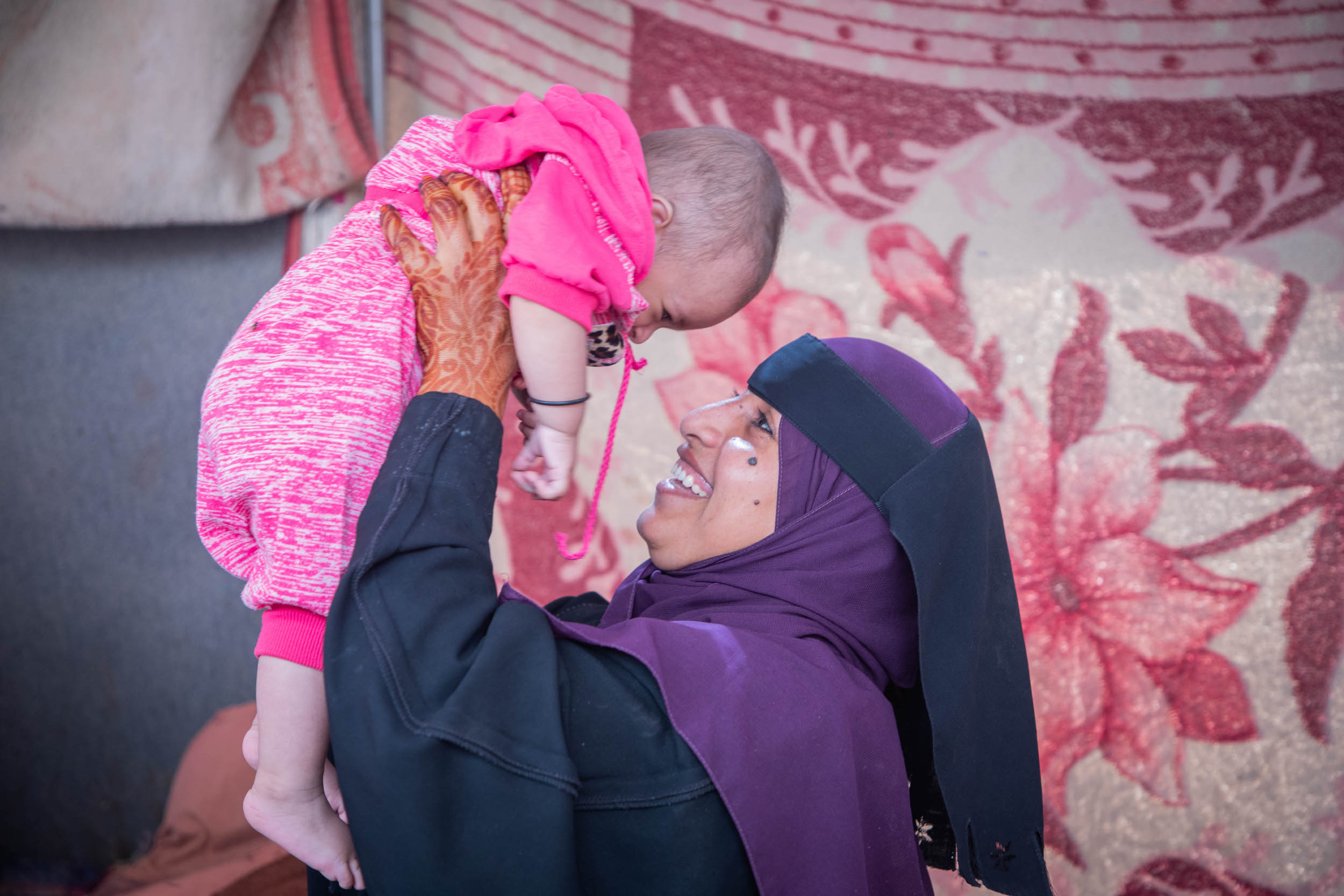 Nawal and her six-month-old daughter, Salma.

“Nawal is incredible,” Annabel said. “It’s clear that women in the camp depend on her. They call her Dr. Nawal, and someone is always outside her tent asking for help. The other day I asked her how many children she’s delivered, and she looked at me like it was just the most ridiculous question she’s ever been asked. ‘Too many to count!’ she said – which just goes to show how busy and respected she is.”

Nawal is also a U.N. World Food Programme beneficiary – she receives support in the form of cash assistance to buy food.

“To me, I feel so proud that the U.N. World Food Programme is providing this fundamental food assistance to her,” Annabel said, “And this is what allows her to continue to help women and do what she loves. And Nawal’s is just one story of the strength of women during this difficult time. There are so many more. Hearing these stories is the best part of my job. It’s what makes all our hard work real to me – seeing that it’s making a tangible difference in people’s lives.”

As Yemen moves into its fifth year of war, the crisis has shifted out of the global spotlight. But while news cycles may have moved on, Annabel urges us not to forget that women there are still suffering deeply.

“One of the best ways you can help right now, is to remember,” said Annabel. “I think it’s easy for Yemen to be seen as a footnote in a very complex political environment and the wider tensions of the Middle East. But it’s not a footnote – it’s the worst humanitarian crisis in the world.” 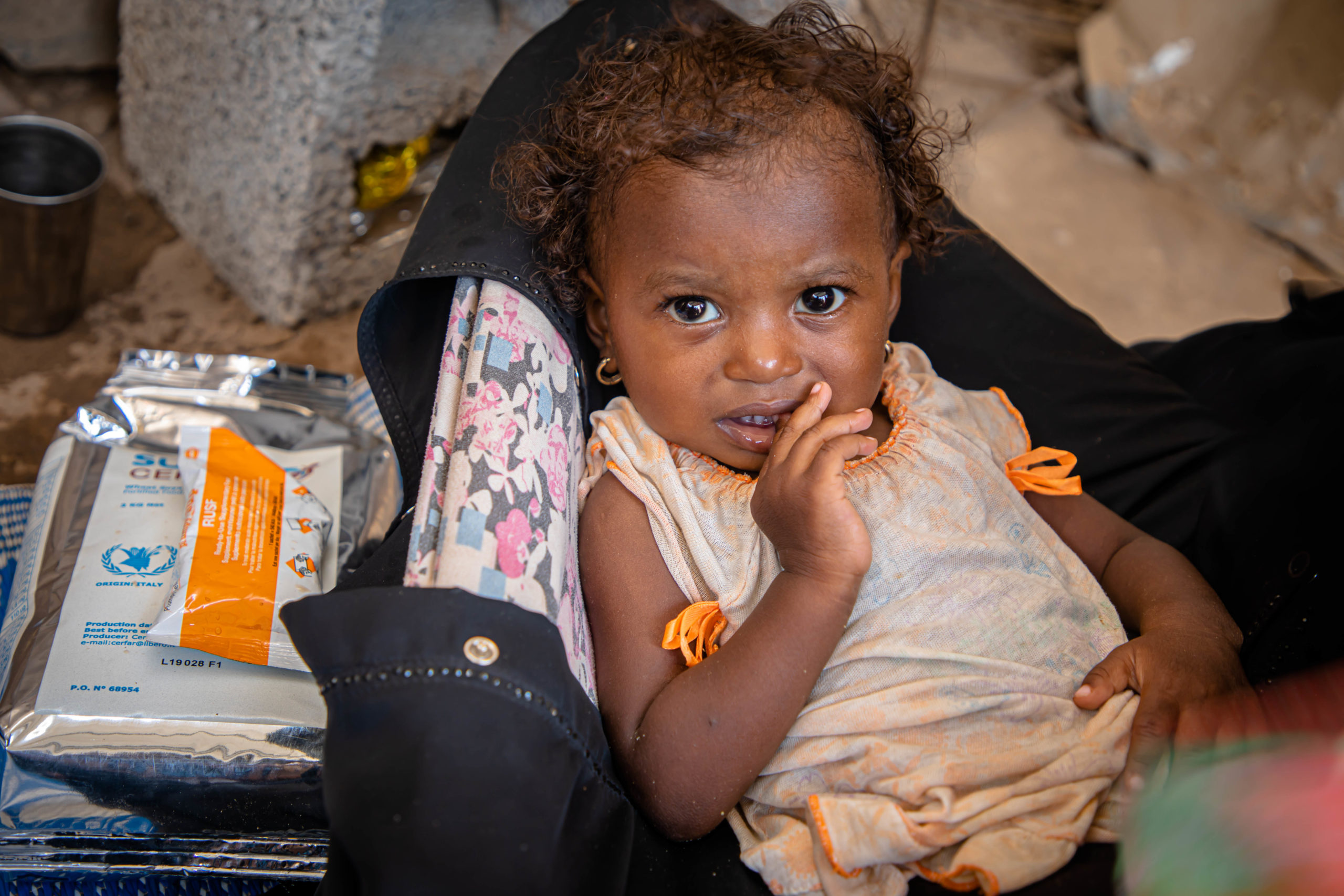 Assistance in Yemen is making a difference. The U.N. World Food Programme has saved millions from the brink of famine, but the agency currently has a funding shortfall of $600 million dollars – funding that’s critical to reaching 12 million severely hungry people each month. Without the U.N. World Food Programme’s continued support, the situation in Yemen will deteriorate quickly.

“Right now, we really need everyone to remember Yemen,” Annabel continued. “Remind your lawmakers; tell them you care. Remember that your support has sustained mothers, kept girls in school and enabled people to survive. We’ve done a lot, but we can’t stop now. Together, we can continue to be that difference for women in Yemen; we can help them have a future. Their stories are too powerful to end with this war.”