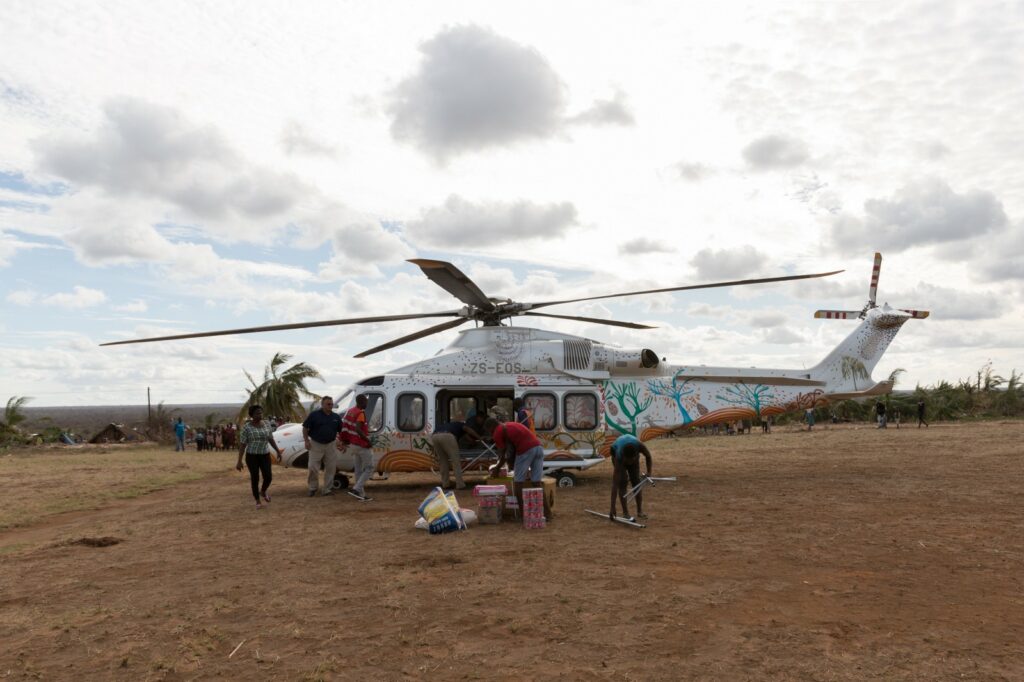 “Now all the boats have washed away… to Madagascar”

At Pemba International Airport, which serves as the hub for the emergency response, people pass by with stern expressions, moving boxes and bags with food rations and medical supplies, loading them onto trucks.

Even at the busiest hour, there is still time for courtesies. “How are you holding up?” I ask Antonio Beleza from Mozambique National Disaster Management Institute (INGC), before he disappears into another meeting. Despite the sleep deprivation showing in his eyes, he gives me a smile and replies, “everyone is tired, but we keep going.”

Just a few days ago, rain poured down in the north of Mozambique, rivers of dirty water flooding the streets, obstructing the emergency response. Today, aid distributions are running smoothly. Blue skies and the sound of whirring helicopter propellers accompany the operations. 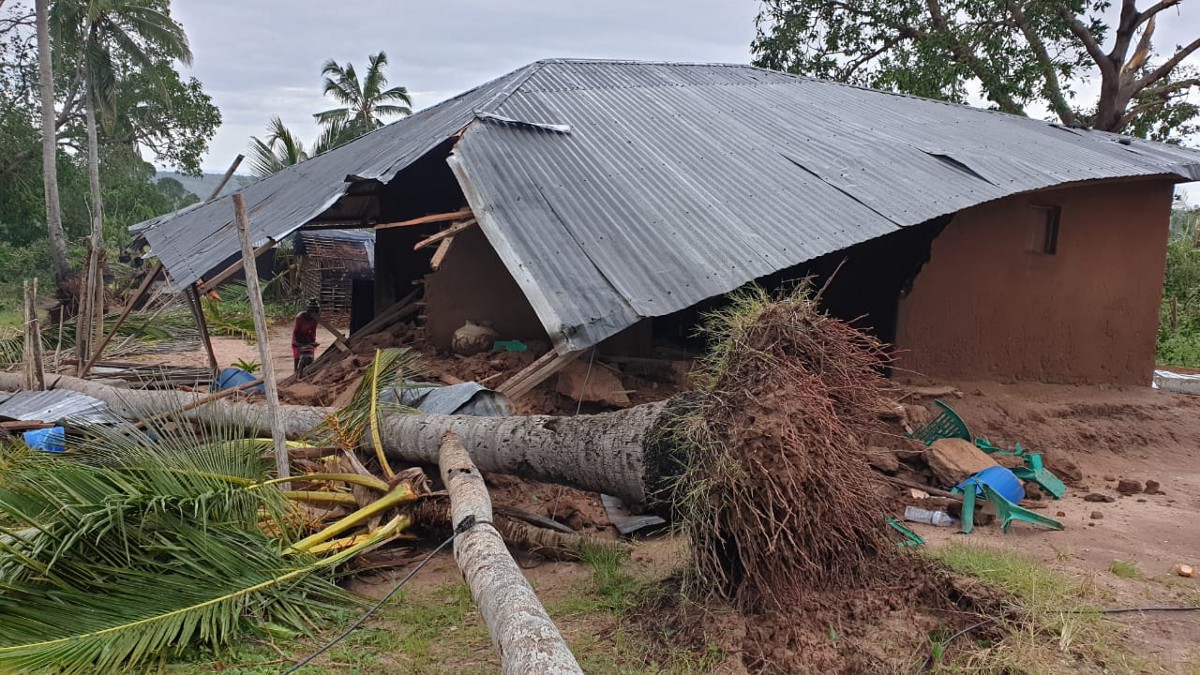 Many of the homes were damaged.

People had to seek shelter elsewhere.

As I wait with INGC and WFP drone teams for transport to one of the devastated areas, my eyes start to wander and I take interest in a pile of laminated leaflets. Patrick McKay, deployed as WFP Data Operations Manager, hands me one of them — awareness campaign on zero tolerance for sexual harassment and abuse. “They need to be put on helicopters and taken to WFP distribution points.”

Patrick, who coordinates the drone flights and processes the resulting data, has just turned thousands of images from Ibo island into detailed maps and digital elevation models, which will help relief agencies make critical decisions about where to deliver aid, which villages to rebuild and where to relocate affected populations.

“The area we’re going to assess today is small, but it was completely wiped out,” Patrick says, showing me some images from the airplane that flew over it: they’re blurry, but I get the idea. The drone team can get much clearer pictures, and with a higher resolution. 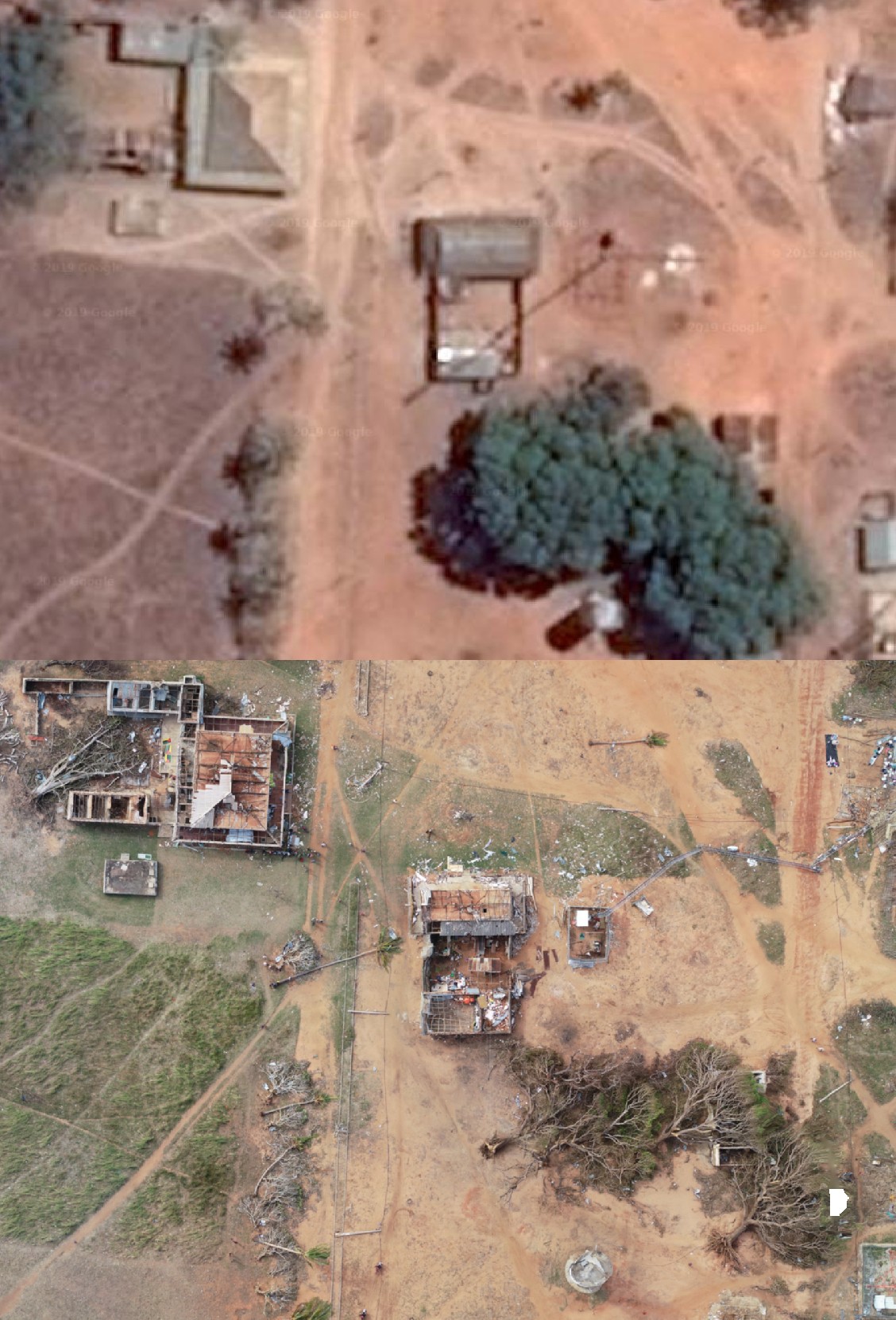 The village of Mucojo, before (satellite image) and after cyclone (drone picture).

Although Cyclone Kenneth was more powerful than its predecessor Idai, the destruction is less noticeable as it is spread over large areas in remote locations and islands. Damage assessment is a cumbersome task, so the drone team splits into two groups. Patrick and his group go to Marrebue while I step onto a small helicopter bound for Mucojo with Beleza and two other drone operators. The view from the sky is beautiful at first, but as we go further north, the landscape changes. “On your 5 o’clock is Quirimba,” says Beleza into the microphone of his headset. The colours turn from deep ocean blue and grass green, to the brown and grey of debris and flattened trees. 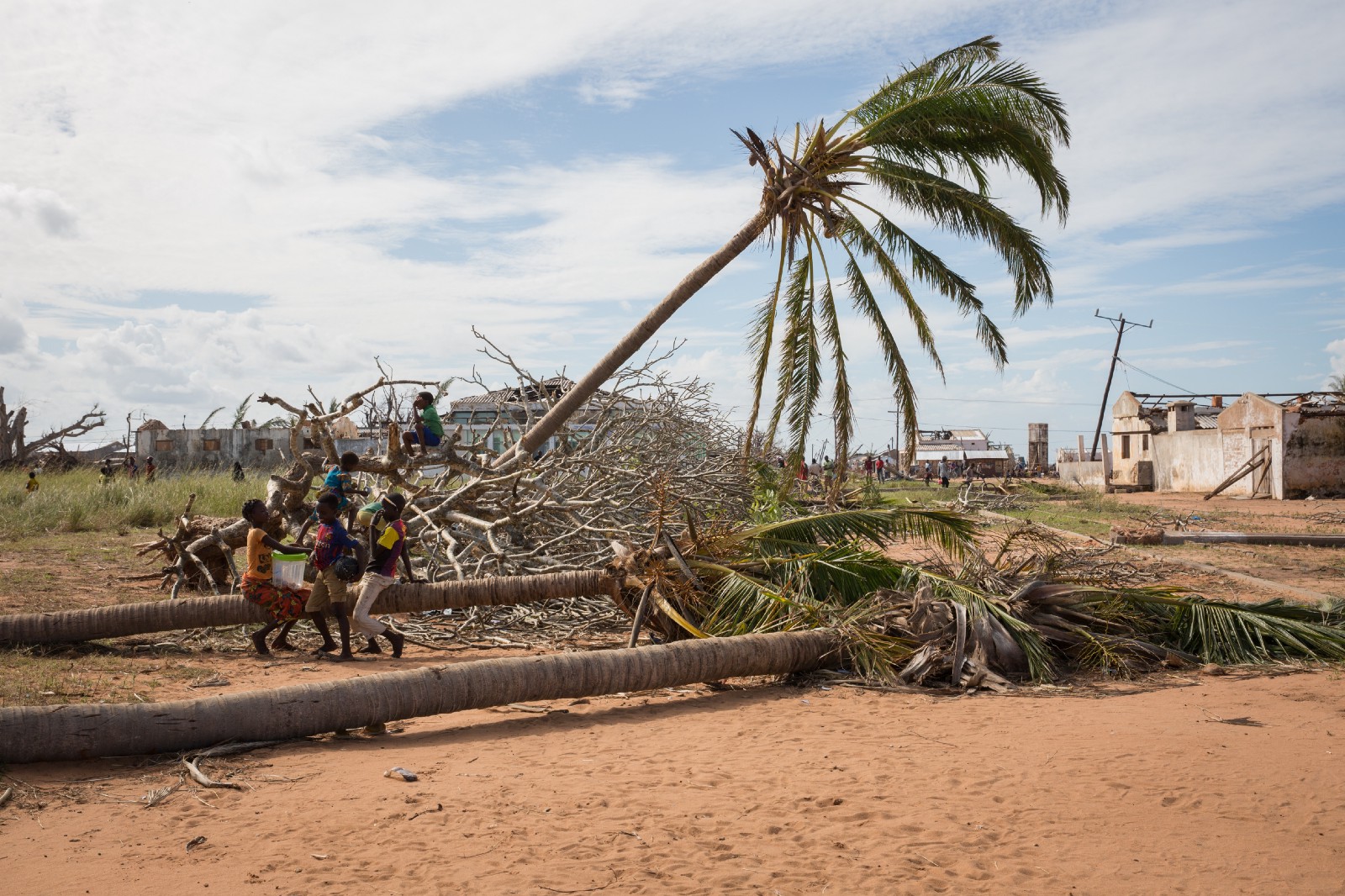 As we land, a crowd gathers; helicopters are a big attraction. The destruction is obvious — pieces of roofs litter the ground and communication towers are bent and defeated. The rubble and uprooted trees have now become playgrounds for children and goats. Our team visits the local “White House”, as Beleza calls it, where chief of the administrative post, Onesto Laish Mulasa, and Maria Augusta, chief of one the villages, greet us. Beleza asks in Portuguese: “Have all the villages been destroyed like this one?” They both nod yes. Chief Mulasa motions his hands back and forth horizontally, indicating that everything has been flattened. 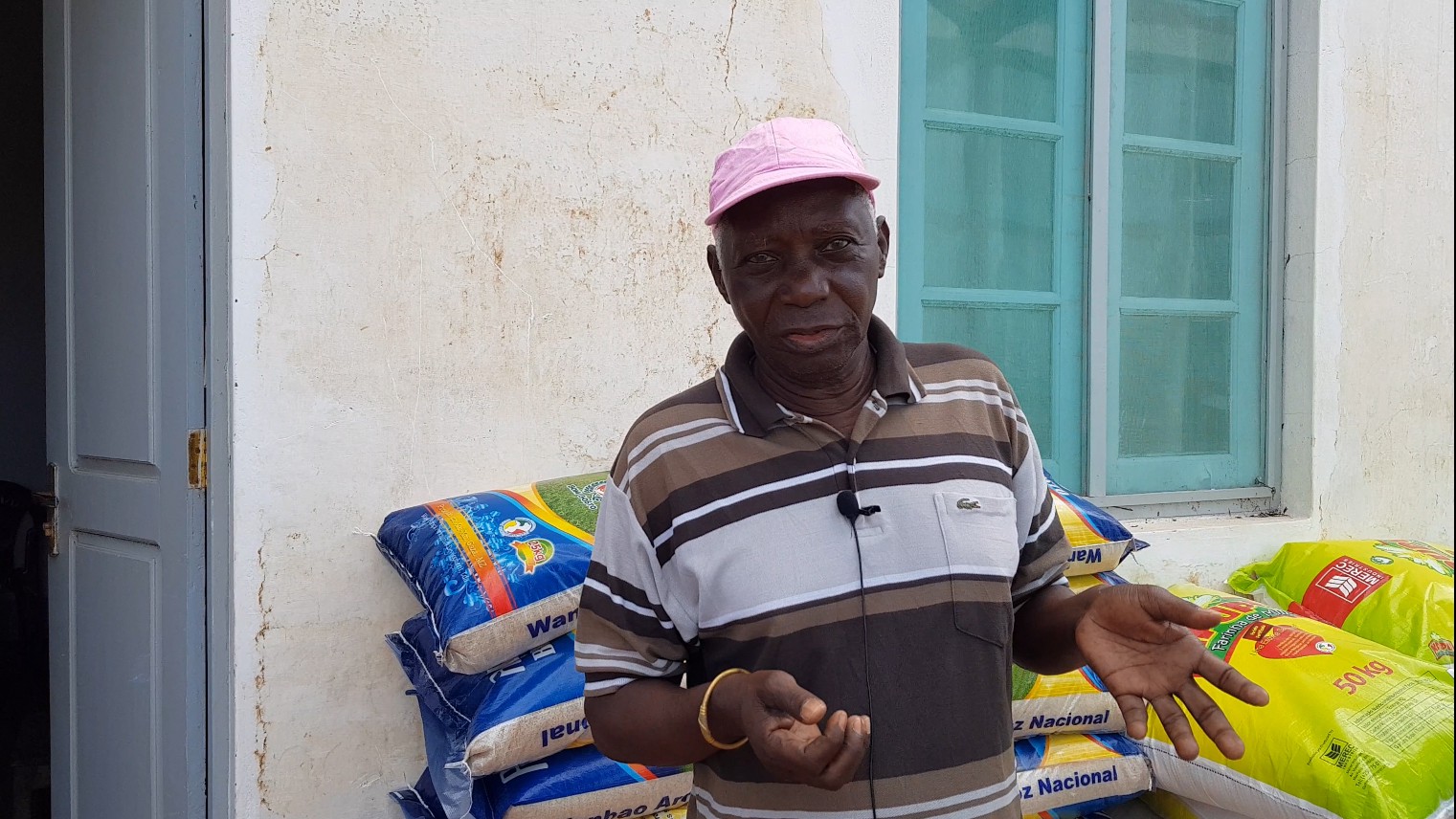 People came to seek refuge in Chief Mulasa’s house, but the roof was swept away by the strong winds.

Today, the government is delivering rice, beans, oil and tarps to help address the most pressing issues. Mucojo is home to more than 36,000 people, most of whom were severely affected by Cyclone Kenneth. Fishery is their primary source of sustenance. Hundreds of boats sailed to sea from here every day. “Now all the boats have washed away… to Madagascar,” says Chief Mulasa, bursting out laughing. Humour has not eluded Chief Mulasa or his people.

Agricultural production will take months to recover. In the distance, the local market appears grim and empty, with just a few tiny fish wriggling, gasping for oxygen. 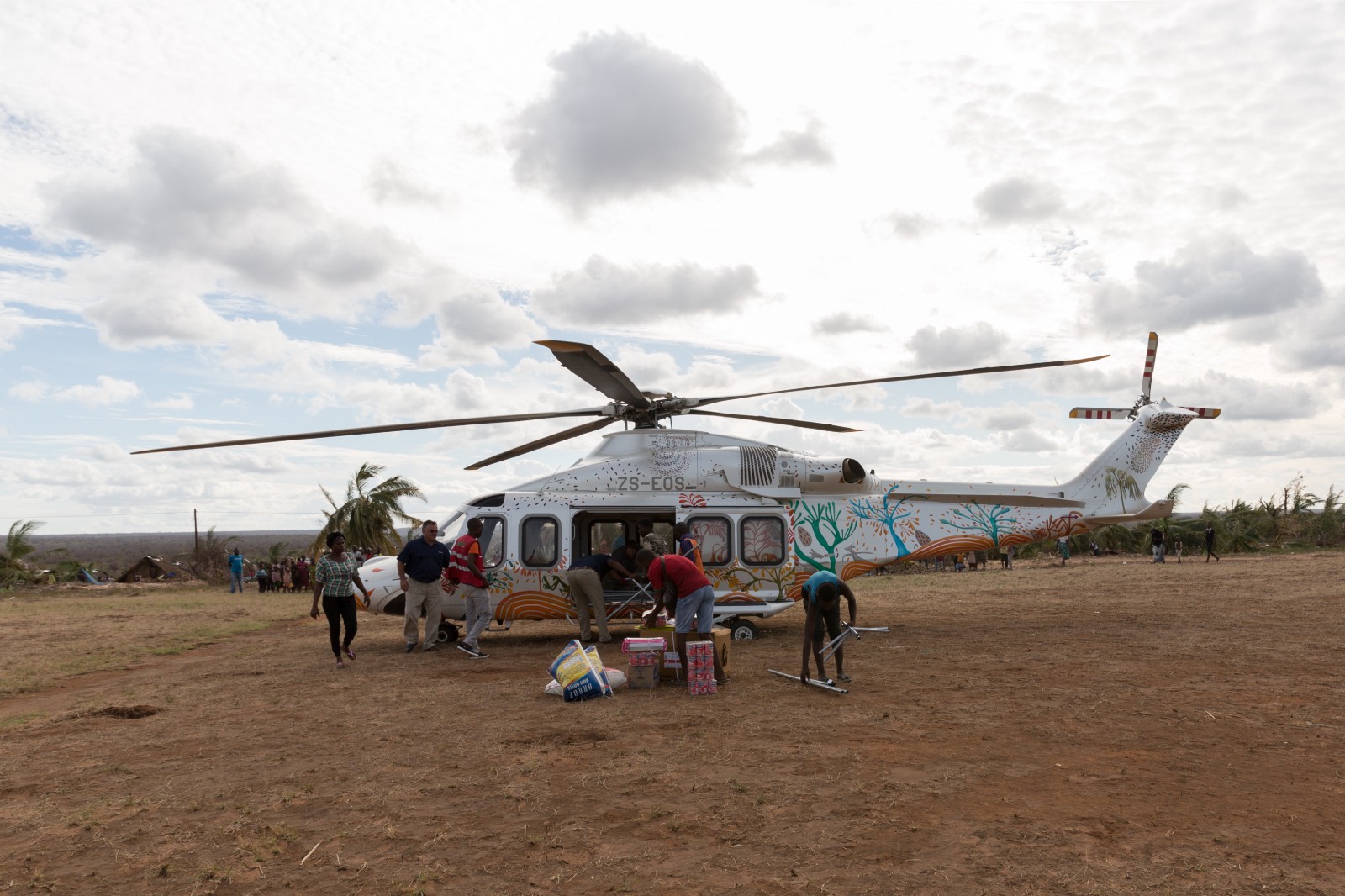 Since the beginning of the response, WFP in collaboration with the authorities and humanitarian partners, has assisted 50,000 people in the disaster-affected districts.

As our team sets up the equipment, children gather around, marveling at the controllers, cameras and satellite phone. Despite drones being a lot smaller than helicopters, we receive loud cheers from the crowd, especially during take-off. A rapid bird’s eye assessment of the village reveals the full extent of the damage; more than 80 percent of properties, infrastructure, farming land and trees have been destroyed. In addition, the team flies drones over a former airfield where grass is wild and tall, hiding debris and litter. Mission Aviation Fellowship (MAF) requested a detailed assessment of the site to prepare for its rehabilitation and eventually be able to reach more people in need. Finally, the team gathers communications materials. Using photos and videos from the sky, we can bring stories to life with the compelling evidence afforded only by drones. Today’s assessment was short, but there are six more villages, which were hit just as hard, so we need to keep moving. 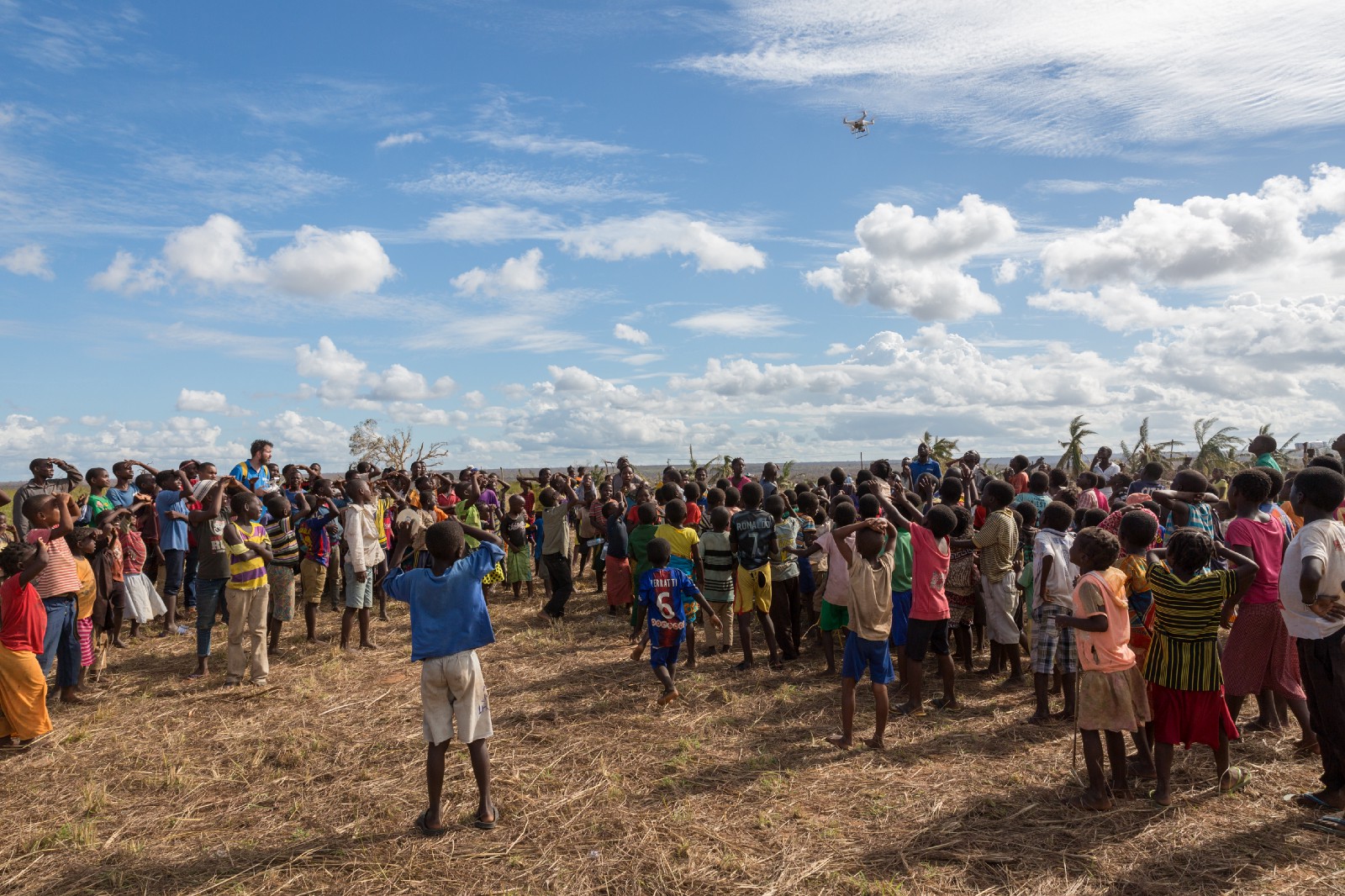 Children cheer as the drone flies out to a mapping mission.

On the way back to Pemba, the scenery turns blue and green again. When the drone teams come together that evening, they exchange results. “We did well,” says Patrick. “We need to go back to fill in the small gaps, but we covered most of the area.” The sun has set hours ago but the day is not over yet. Tomorrow’s missions need to be planned, images require processing and videos are waiting to be edited.

There’s no rest for the wicked — as the saying goes — nor for the WFP drone team. 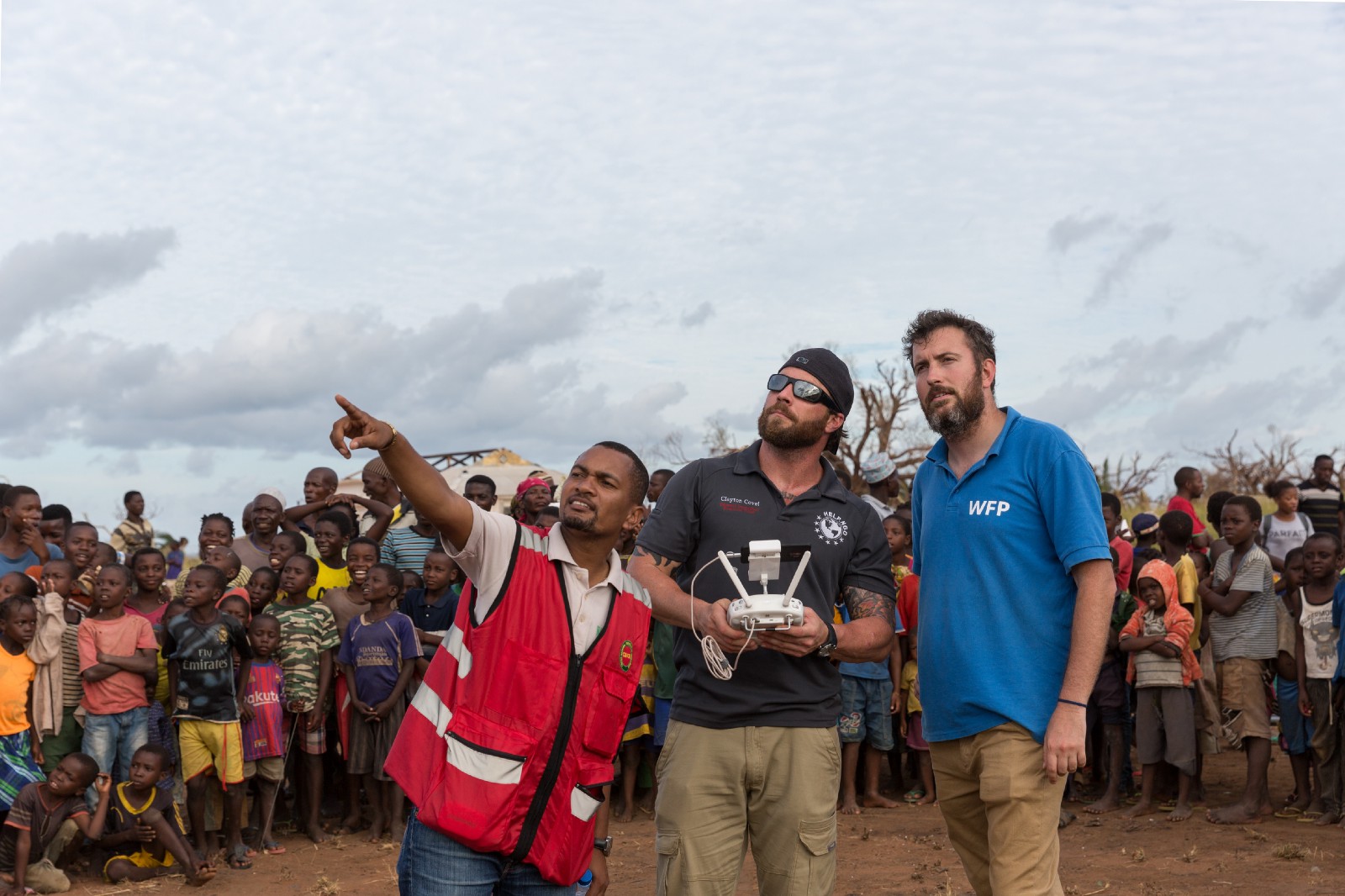 Drone pilots ensure the safety of operations, by always keeping their eyes on the drone.