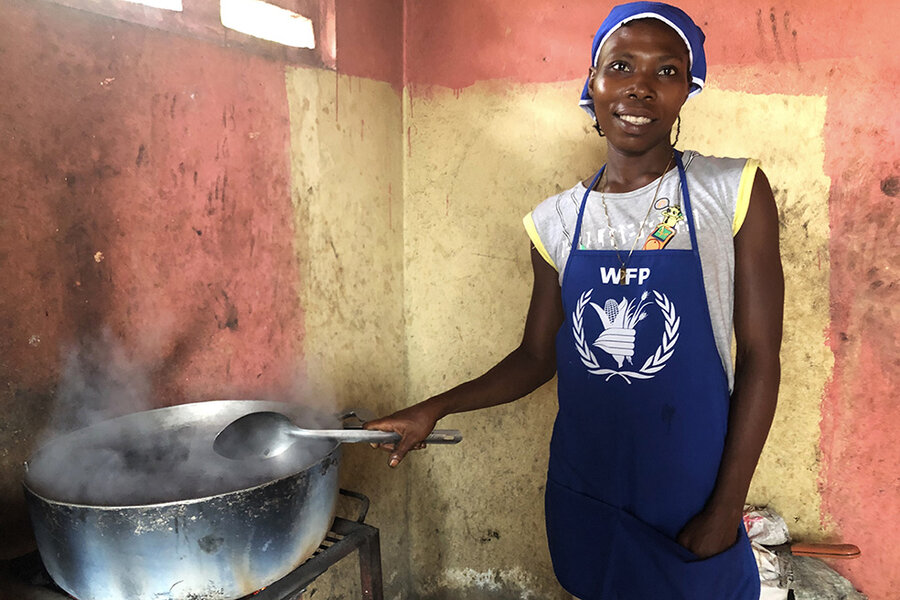 When a 7.2 magnitude earthquake hit Hati’s southern peninsula in August 2021, the United Nations World Food Programme (WFP) wasted no time in responding with emergency food assistance — distributing over 4,000 metric tons of food and $2.4 million dollars in cash-based transfers by December 1, 2021. But helping communities recover goes beyond emergency aid. It involves rebuilding infrastructure, brick by brick, and continuing programs that feed families each day. Which is exactly what the U.N. World Food Programme has been up to in southwest Haiti since the quake hit.

For International Day of Education, we’re taking look at how new schools and hot meals are keeping students in the classroom – even after disaster strikes.

Rebuilding Schools, a Return to Life for an Entire Community

A few more bricks, a bit of putty and a coat of paint. In tropical afternoon heat, Renel Begrade hastily finished the last low wall of the Notre Dame de Lamercie school in Nippes, one of the regions worst affected by the earthquake. The walls of this school, which hosted more than 200 students, did not withstand the tremors.

“We are reconstructing a solid building. And for me working on this site means that I am able to earn enough money to pay for my child’s schooling fees,” said Renel.

In the months following the earthquake, the Ministry of Education supported by the U.N. World Food Programme worked to rehabilitate the destroyed schools in record time. Thanks to a simple design by the U.N. World Food Programme, a temporary structure has been built that includes a classroom, kitchen and storage space, and can be expanded to include additional classrooms in the future. Though, these features are not even the best part.

“We had to take into account the risk of natural disasters in the region. So, thanks to the Engineering team, the rebuilt schools are all earthquake and cyclone resistant,” says Tanguy Armand, the U.N. World Food Programme’s head of infrastructure in Haiti. 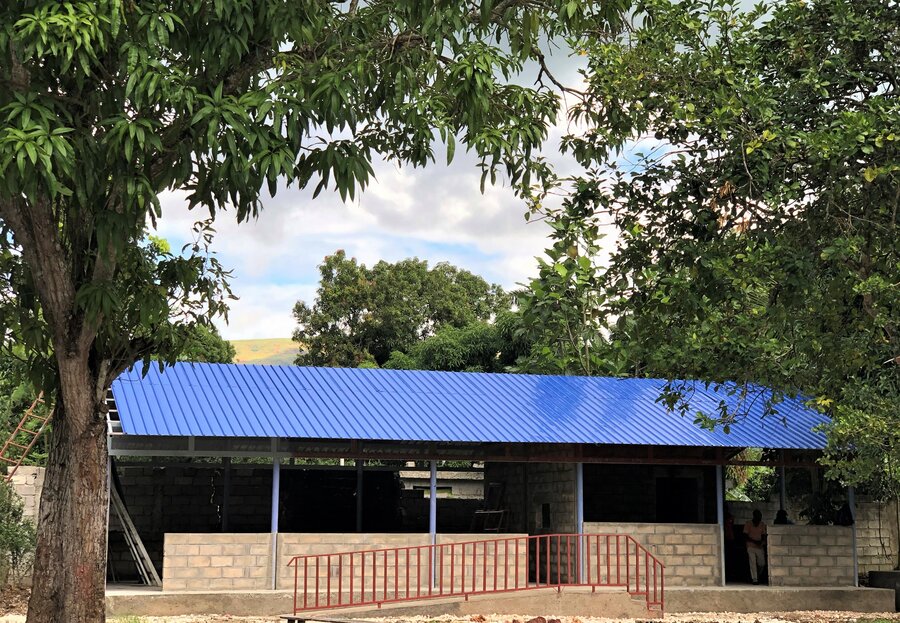 By the end of 2022, the U.N. World Food Programme, in support of the Haitian Ministry of Education, hopes to rebuild 190 schools. In the meantime, Renel was proud to have finished the construction of one of the first rebuilt schools and planned to accompany his own son for a back-to-school experience they will both surely remember.

“I really thought the school door would stay closed this year – but with this project, life starts all over again,” he said.

It was 11 a.m. at the Ecole Nationale des Filles de Dame Marie, a school in the small town of Jérémie on the western peninsula of southern Haiti. Two volunteer cooks were running a bit late with the preparation of the day’s meal for 307 schoolchildren.

On the menu for the school meals were black beans, which took a little longer to cook than normal. Wheat grain, vegetable oil, spring onions and spicy peppers were then to be added to two steaming pots.

To support the recovery of Haiti’s most vulnerable communitties, the U.N. World Food Programme provided free hot meals to students who were affected by the massive earthquake. Despite the name of the school, both boys and girls benefitted from the school meals initiative. 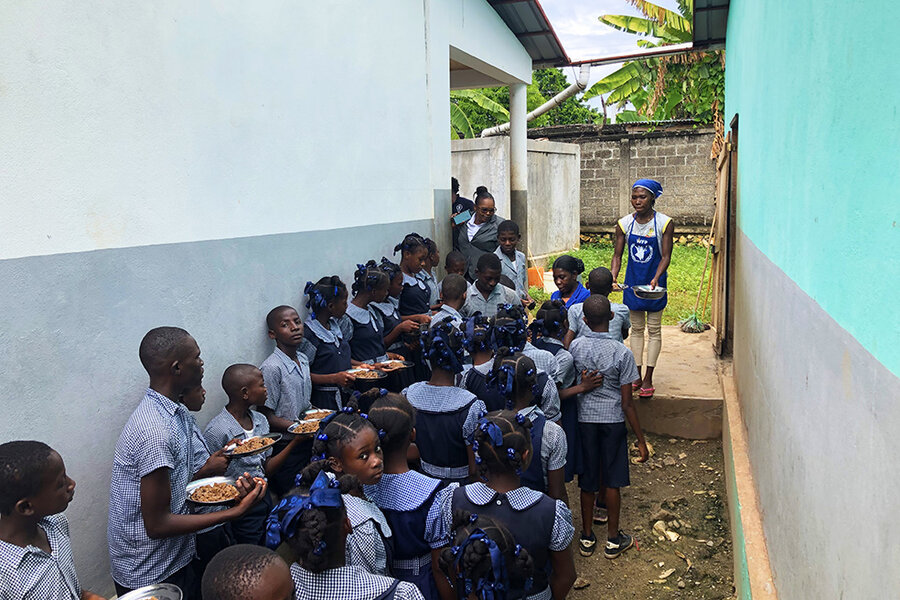 Principal Franesie Sylvestre said for many,“this is the only meal they will eat today.” In Haiti, 345,000 children depend on the U.N. World Food Programme for daily school meals.

Many parents of these children lost their farms or missed planting season due to the disaster.

“They can no longer cultivate food,” said Principal Franesie Sylvestre, “so they cannot feed their children properly. That’s why this school feeding program is so important. It will give the children energy to carry on studying and provide support to their parents. In the long run, that is good for our community.”

The school feeding initiative also aims to do more than just provide meals. Small handwashing stations, fashioned from buckets, stand on platforms outside each classroom. They’ve been installed by UNICEF to ensure that the children learn good hygiene habits, such as washing hands before meals. UNICEF also provided study books as well as desks for students to comfortably work.

“We have to take a holistic approach,” said U.N. World Food Programme Field Program Assistant Maguelita Varin, “because if children don’t wash their hands and then eat, they can get sick. And if they don’t have any books, they’re not able to study even if they have eaten well.” 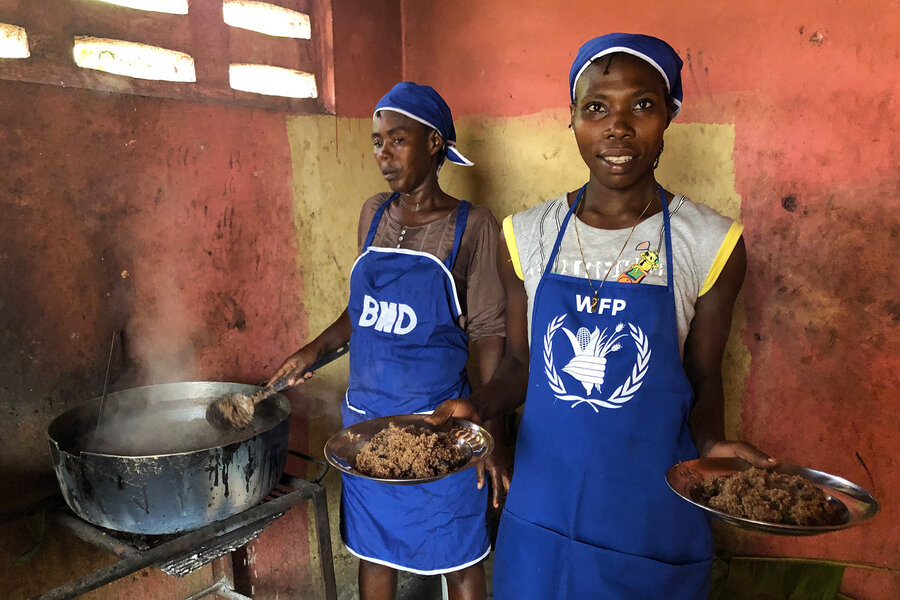 The U.N. World Food Programme’s school meals program is planning to expand and use more locally grown produce for almost 40,000 children in areas that were affected by the earthquake.

At the Ecole Nationale des Filles de Dame Marie, the food is ready, and students are lined up patiently to wash their hands before joining the queue for their hot meal. Back at their desks, they tucked enthusiastically into generous helping of beans and wheat. Too focused on eating to spend time chatting, the teachers could proceed knowing their students are well fed and focused on the lessons to follow.

The story “Rebuilding Schools, a Return to Life for an Entire Community” originally appeared on WFP’s Stories on November 15, 2021 and was written by Elise Gibergues-Newton.

The story “Hot School Meals Help Children in Wake of Haiti Earthquake” originally appeared on WFP’s Stories on November 20, 2021 and was written by Daniel Dickinson.

To learn more about our programs in Haiti, click here.