Senator Robert Dole, who died today at the age of 98, left behind an extraordinary record of contributions to the United States and to the world. Among them all, he deserves special recognition for the truly transformational role he played in the domestic and global fight against hunger.

Throughout his long career in Congress, Senator Dole was one of the most effective champions of nearly every domestic U.S. government program aimed at preventing and ameliorating hunger – including the two foundational pillars of our federal government food security landscape: the Special Supplemental Nutrition Program for Women, Infants and Children (or WIC) and the Supplemental Nutrition Assistance Program (or SNAP).

He did this often with his former Senate colleague George McGovern, who shared Senator Dole’s passion for feeding and nourishing the poorest people – particularly children – across the country and around world. Even as the two men were leading voices from very different points on the political spectrum, defeating hunger brought them together in a non-partisan collaboration of conscience.

Recognizing their partnership, the World Food Program USA established in 2002 the McGovern-Dole Leadership Award, which has since gone to public figures – including the award’s two namesakes – who supported efforts to feed the hungry both in the U.S. and around the world. The two senators also received the prestigious World Food Prize in 2008, and in 2002, Congress likewise honored the two leaders’ stature and fervent efforts to combat hunger when it approved the creation of the McGovern-Dole International Food for Education and Child Nutrition Program. As we have noted here, that McGovern-Dole  program is one of the most effective tools to fight childhood hunger that we have in our toolkit. 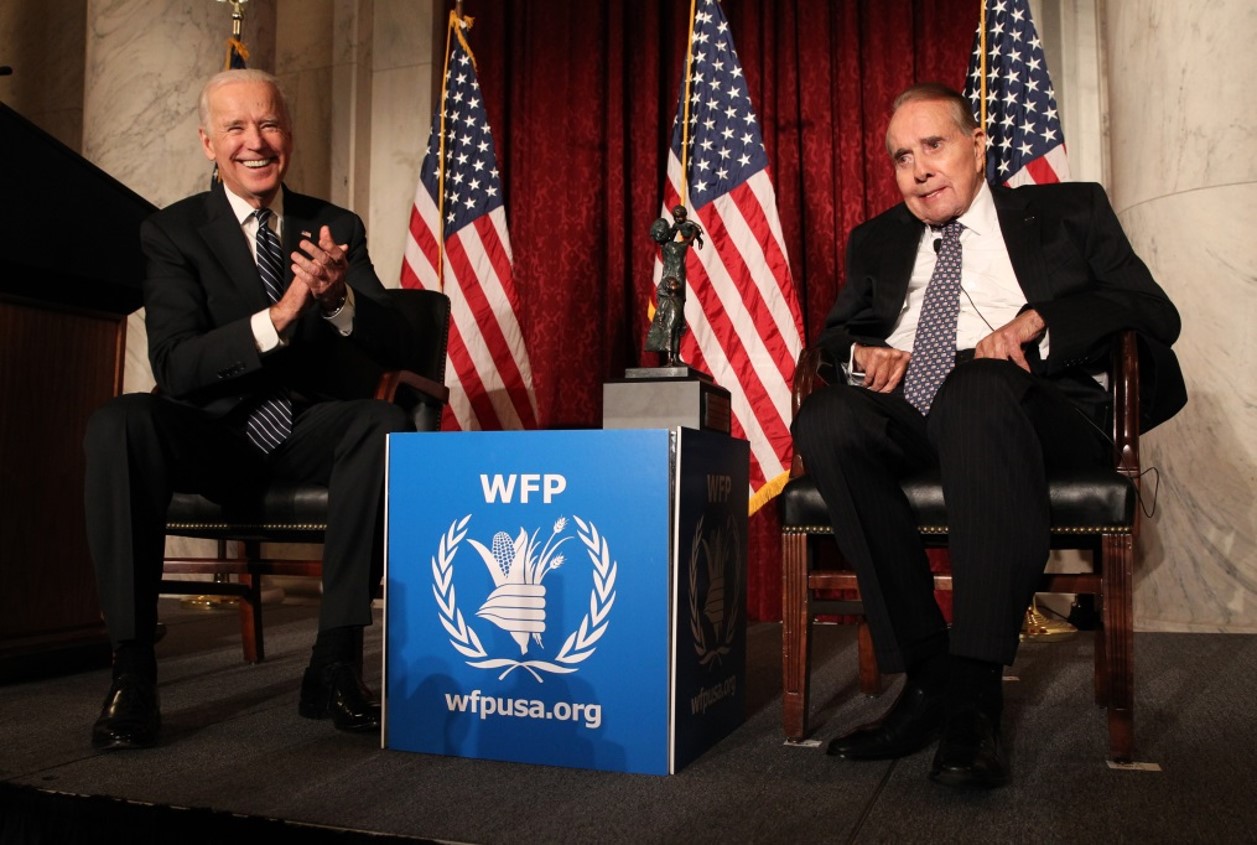 Growing up in Kansas during the Great Depression, Senator Dole knew firsthand what hunger looked like and how it ravaged individual lives and society as a whole. And as a decorated World War II combat veteran who witnessed a shattered Europe (before he sustained grave wounds himself), Senator Dole recognized that hunger transcended international boundaries and that humanity had a responsibility to eradicate it.

His food security advocacy in Congress goes back at least to 1966 when, then in the House of Representatives, he introduced an amendment to the landmark Food for Peace Act that called for volunteers – who would come to be known as the Bread and Butter Corps – to train farmers in developing countries. “America must do everything in its power to ward off the tragedy of world famine that threatens,” he said at the time.

In the 1970s, he and Senator McGovern together pressed for – successfully – the expansion of the National School Lunch Program, as well as provisions in the Food and Agriculture Act of 1977 to strengthen the federal food stamp program. In 1983, as chairman of the Senate sub-committee on nutrition, Senator Dole helped create the Temporary Emergency Food Assistance Act, which enabled the Secretary of Agriculture to distribute farm surpluses for domestic food security programs. In 1991, in the wake of a deadly tornado that rampaged through Southeast Kansas, he led the passage – in a mere four days – of food stamp assistance for residents in those counties, and he did the same later for others victimized by natural disasters.

In 2013, when World Food Program USA honored Senator Dole with the award that bore his and George McGovern’s name, he noted that:

As global hunger climbs (again), children are often the innocent victims. Today, 821 million people go to bed hungry and hundreds of millions of children suffer from malnourishment of some kind, in some cases so severe that the body literally shrinks itself to survive. Many of the health impacts from severe malnourishment can be prevented but they cannot be reversed. We increasingly face potential intergenerational losses from hunger: these children do not grow up to build prosperous economies or peaceful societies.

Deep in his soul and driven by his conscience, Senator Robert Dole possessed the impulse to quite literally feed hundreds of millions of hungry people on our shores and abroad. Many of those people were rescued from the abyss of hunger because of his concern for their plight. Many others – including all of us at the World Food Program USA – have been inspired by him.

Today, as we mourn Senator Dole, we draw on that inspiration to do everything we can for as long as it takes to ensure that all people have the food and nutrition every human being deserves and must have to thrive.

We offer our deepest condolences to his wife, the former Senator Elizabeth Dole, his daughter Robin, and to the large family of friends and admirers he cultivated over a glorious career of public service.