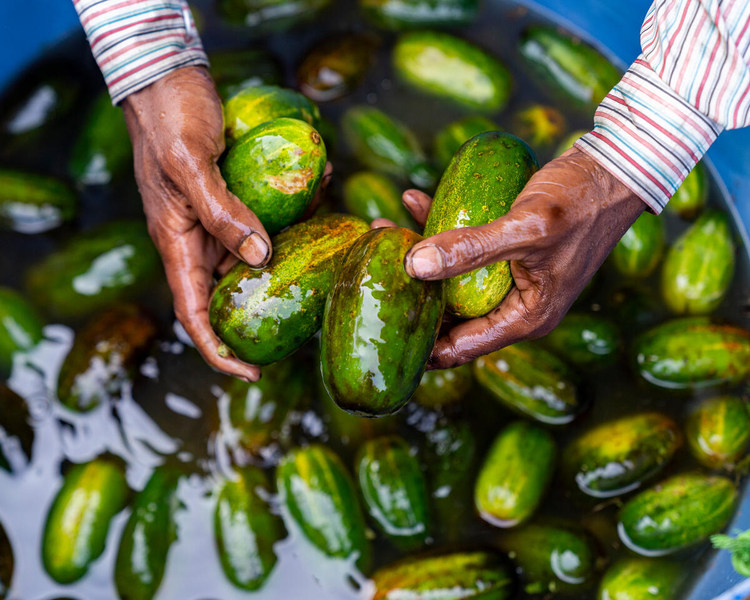 What does food waste have to do with ending global hunger? Consider these two facts:

The United Nations World Food Programme (WFP) knows the value of food and is working in Peru to transform fruits and veggies destined for the dump into nutritious meals to feed families need.

As the sun rises over Lima, the city’s main wholesale food market comes alive. Every morning, over 2,000 pounds of fruits and vegetables are transported out of the market to be sold across the city. But tons of food remains unsold and fated for landfills.

The U.N. World Food Programme, together with Banco de Alimentos and support from USAID’s Bureau for Humanitarian Assistance, has arranged for the discarded food to be collected and delivered to food banks and community soup kitchens that feed thousands of Peruvians every day.

Tons of food that had been discarded in the Santa Anita district market.

In the first round of collections, 15 tons of food were rescued from the market – that’s the equivalent of 15,000 perfectly edible pineapples – and transferred to a collection center. Volunteers then begin the process of cleaning, sorting and labelling potatoes, cucumbers, bananas, green beans, spinach, basil, parsley, squash, leeks, coriander, papayas, pineapples, lemons and other products that make up Peru’s biodiverse agriculture.

Food labelled suitable for consumption is transferred to various soup kitchens, the number of which has grown due to the economic effects of the pandemic.

The team at Santa Rosa de Lima soup kitchen in San Juan de Lurigancho said that the volume of food supplies they received after this operation was six times their usual nightly delivery from Banco de Alimentos.

Food brought from the market is unloaded at the collection center in the San Juan de Lurigancho district.

During the last 6 months, thanks to the support of USAID’s Bureau for Humanitarian Assistance, more than 600 tons of food have been rescued. Following this successful pilot, U.N. World Food Programme Peru is expanding its food rescue operations, together with Banco de Alimentos, in various regions of the country. In the next few months, this alliance will strengthen Banco de Alimentos’ operations to provide support and help combat hunger during the pandemic.

This story originally appeared on September 29, 2021 on WFP’s Stories and was written by Ana Lucía Llerena.

Visit our Food Waste Hub to learn how saved food is key to reaching Zero Hunger.