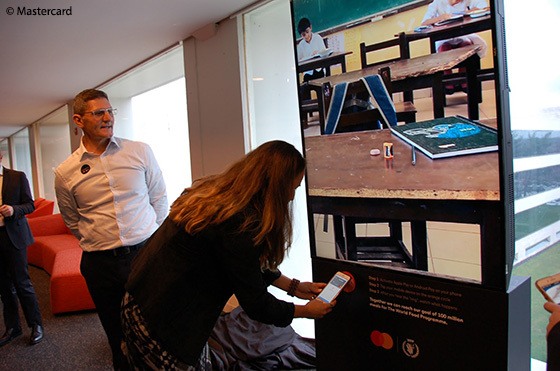 Start Something Priceless With Your Employees

It’s the kind of goal that takes a village to achieve. And Mastercard’s employees are ready to make it a reality—one meal at a time.

At its U.S. headquarters in Purchase, NY, Mastercard launched an employee engagement campaign to support its bold initiative through the World Food Programme (WFP), the world’s largest provider of school meals.

Energized employees tapped their cards and phones to a newly unveiled interactive contactless billboard, seamlessly making a $1.25 donation to provide a week’s worth of school meals to a hungry child in Bolivia. After every donation, a child appeared on the screen, sitting down at a school desk to enjoy a warm meal of rice and beans.

“We often say the best moments in life don’t just happen, people make them happen,” said Mastercard President and CEO Ajay Banga. “This is a new opportunity for our employees to ignite a connection, fuel a passion, create a moment, launch a movement, change a life or maybe even change the world.”

About 25 percent of children in the rural areas of Bolivia suffer from chronic malnutrition. Roughly 40 percent of the entire population lives below the poverty line, and nearly two-thirds of families do not earn enough money to afford the minimum amount of food necessary for healthy living.

“These campaigns are life-changing—for children in need and the inspiring employees that make these experiences possible,” said World Food Program USA President and CEO Rick Leach. “We are honored to support Mastercard’s campaign to provide 100 million meals around the world.”

Since 2012, Mastercard has supported WFP’s work in more than 30 countries, including revolutionizing how food assistance is delivered in refugee camps around the world. In 2017 alone, Mastercard provided funding equivalent to 55 million school meals to WFP and other partners.

Learn more about how your employees can join our lifesaving and life-changing mission.