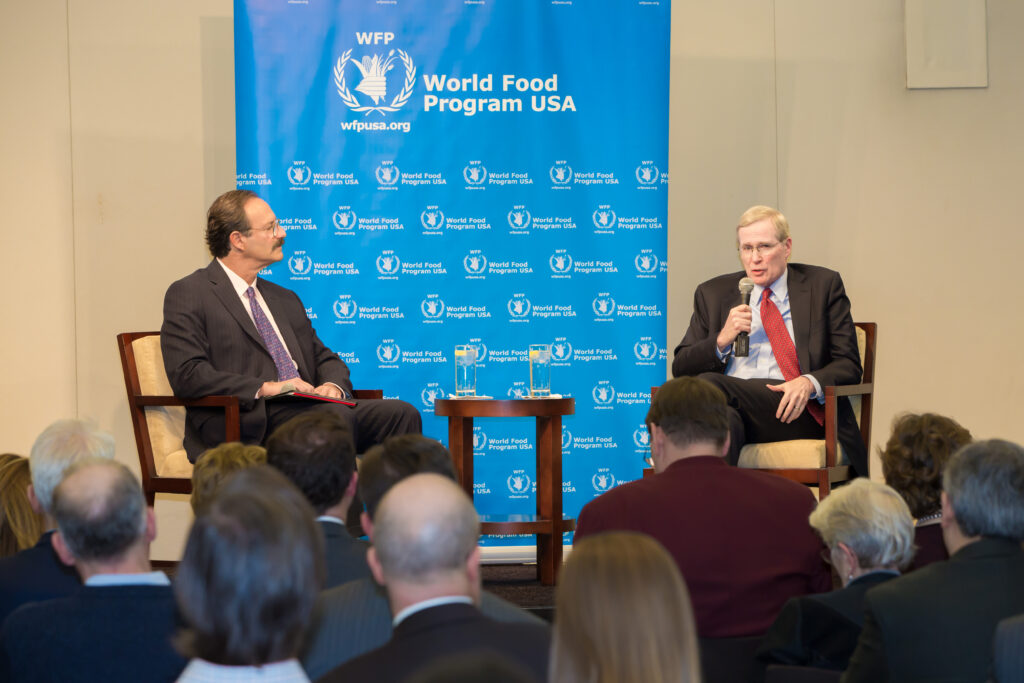 The two discussed the link between national security and food security—an especially timely topic given that conflict is driving displacement and widespread hunger in places like Syria, South Sudan and Yemen.

“As we meet here today, the world is facing unprecedented challenges: For the first time in a decade, the number of hungry people is on the rise,” Leach said during the event’s introduction.

“For the first time in history, the world faces the prospect of four simultaneous famines in northeast Nigeria, Somalia, South Sudan and Yemen.”

Leach noted that each of these four hunger crises is the result of conflict. In fact, 80 percent of all humanitarian emergencies is being driven by violence. As the former Assistant for National Security Affairs under President George W. Bush, Hadley understands the complicated factors that can lead to instability. During yesterday’s lecture, he noted that military might alone can’t solve the problem of fragile states and prolonged violence.

“We need an integrated approach that includes both hard and soft power,” Hadley said.

This soft power includes humanitarian assistance and development efforts that protect and provide for the most basic needs of a population: Food, water, energy and the environment.

“If you worry about extremism, as a practical matter, you have to address the issue of food,” Hadley said.

Hadley called for a “whole-of-society” approach that unites the public and private sectors in the fight against food insecurity. He also noted that just a dozen or so “fragile states”—low-income countries with poor governance—are responsible for the bulk of the world’s refugees. “If we can raise the visibility of the overall idea of fragile states, we can move forward,” he said.

If you worry about extremism, as a practical matter, you have to address the issue of food.

Before speaking, Leach and Hadley both paid tribute to their friend and colleague, the late Samuel “Sandy” R. Berger, the former WFP USA Board member for whom the lecture series is named.

“He served on our board for over a decade and led our efforts to highlight the link between food insecurity and global stability,” Leach said of Berger’s legacy. As National Security Advisor under President Bill Clinton, Berger played a pivotal part in shaping America’s role in the post-Cold War era. Like Hadley, he understood how food assistance can stabilize regions in crisis.

“Working with him was one of the greatest experiences of my professional career,” Hadley said of his time collaborating with Berger to tackle major global issues from a bipartisan perspective.

Yesterday’s discussion coincided with the release of WFP USA’s new report, Winning the Peace, which examines the link between instability and food insecurity. Published last week, the report arrives at a pivotal time in world history as four countries—Nigeria, Somalia, South Sudan and Yemen—teeter on the brink of famine. In total, some 20 million people could die of starvation if the situation continues to deteriorate. As the report states, there can be no security without food security. If left unchecked, chronic hunger destabilizes nations, creating fertile ground for unrest in many forms, from migration and food riots to recruitment by violent extremists.

“We need to broaden the narrative around why we invest in global food security,” Leach concluded at yesterday’s event. “Yes, it’s morally right and consistent with our long-standing bipartisan legacy of leadership.”

“But it’s also among the most effective tools to protect American interests and ensure global stability.”

Give today and help WFP USA promote smarter policies on the Hill.