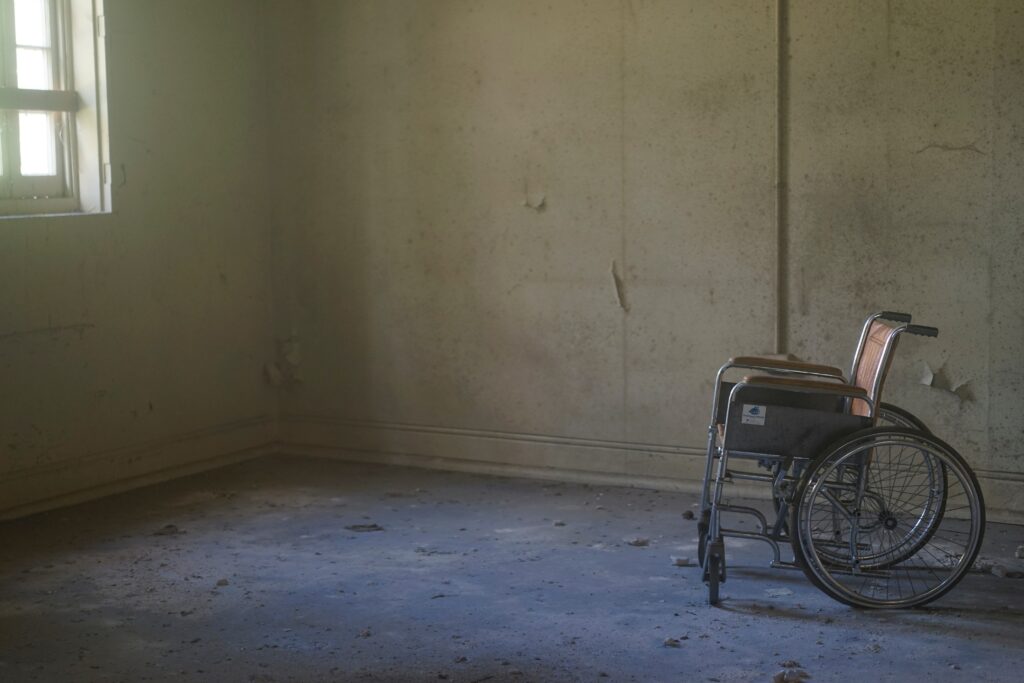 In Syria, How Do You Escape Bombs When You’re in a Wheelchair?

Conflict in Northern Syria erupted a few weeks ago when Turkish airstrikes destroyed hospitals, schools and infrastructure. The violence forced more than 176,000 people – 74,000 of which are children – to flee their homes. To save themselves, many escaped on foot with only what they could carry. 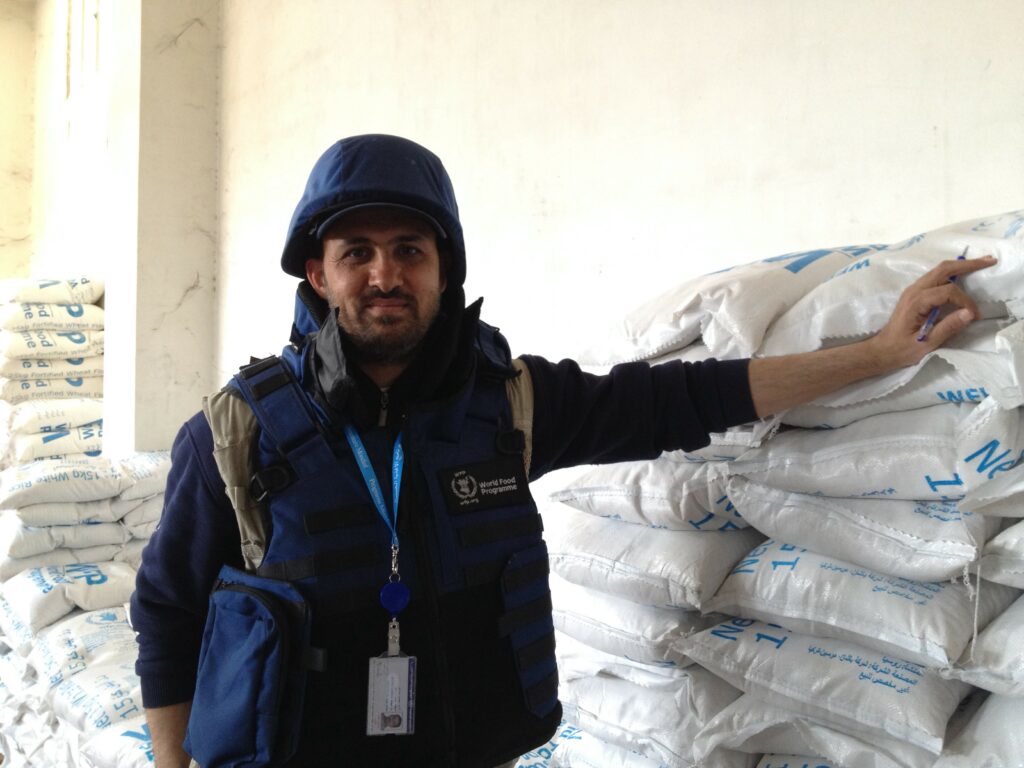 WFP program officer Isam Ismail coordinates the emergency response in northeast Syria as thousands of people are driven out of their homes by conflict.

Driving back to Qamishly from a mission in Al Hasakar on a Wednesday afternoon earlier this month, WFP program officer Isam Ismail glanced up at the skies.

At that moment, he saw the first missiles being fired in the distance, signalling the start of renewed fighting in northeast Syria.

He thought of what the people in the towns under attack were facing and how they were feeling. His memory took him back to 2012, to the outbreak of violence in his hometown on the outskirts of Damascus. He recalled his mother, father, brothers and sisters fleeing the family home, the immediate relief of escaping mortars and the slow, drawn-out pain of losing everything and becoming displaced.

Isam knew that over the coming days there would be thousands of people fleeing the bombardments. He needed to get back to WFP and get the emergency response going.

After pushing her son all day, Khadijah and Mustafa found refuge in a host community shelter.

As Isam pressed the accelerator, miles away, Khadijah had to quickly strap her disabled adult son Mustafa into his wheelchair and flee their home. “I was just finishing preparing the meal for our family when the explosion sounds begun,” she said. “We couldn’t eat a bite.”

Khadijah, a widow, pushed Mustafa’s wheelchair on foot for over seven hours before a car finally came and took them to a shelter 50 miles from their home. “The last picture I have of my home is of the dining room where dinner was served. We had to flee without carrying anything,” she said.

The only thing on her mind was that she wanted to get him to safety. 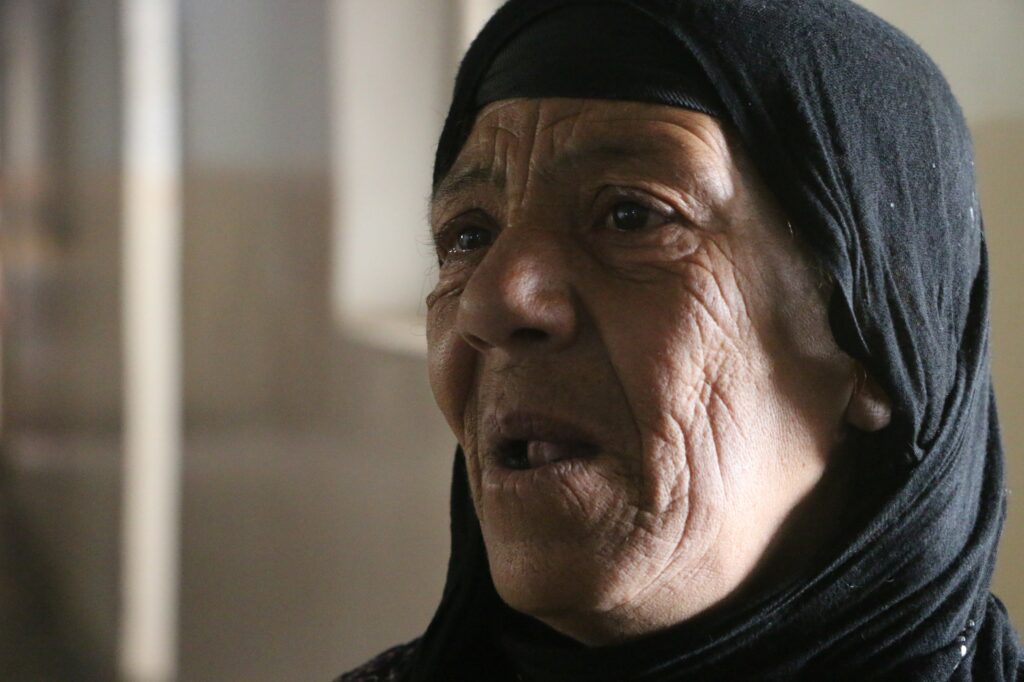 73-year-old Salja worries she will never be able to return to her home.

73-year-old Salja Modhi and her family of 12 barely escaped as bombs came raining down on them.

In the ensuing chaos, they had trouble finding a car to take them somewhere safe. When they did, the journey was tough – crammed together in a convoy with hundreds of other displaced people. On arrival, they did not find a warm welcome or a safe haven.

“We had no place to sleep there, we slept one night in the wilderness.”

Salja and her family got lucky when a humanitarian NGO picked them up and took them to a shelter.

“All we ask for now is to have basic life necessities like food,” she said.

As they settled into the shelter, the family spoke of their only hope: for their house not to be destroyed and to go back home again.

The WFP office in Qamishli assists over half a million people, providing general food assistance in Al-Hasakeh and Ar-Raqqa governates every month — this figure now looks set to increase. Isam and his team worked around the clock, mapping where the bombardments were happening and where the displaced people were heading.

Plans for food distributions were adjusted to reach more people and include more ready-to-eat rations for people on the move. Warehouse workers worked into the night to make this happen.

“We were determined to reach the displaced people. When they move, we move too,” says Isam. “We are mostly Syrian and we are all committed humanitarians.”

“I defy anyone to keep a tear inside their eye when you see the people who are our friends, neighbors, families in this terrible situation. It is deeply motivating to serve your own people and bring them food and support at this terrible time”.

More than 170,000 people have so far fled the fighting, seeking refuge with host communities in Al-Hasakeh and Ar-Raqqa cities, either with families or friends, or in collective shelters.

“As first responders we moved quickly to reach the newly displaced people and to support the host communities and families who would take them in,” says Isam. “With so many on the move, finding some of the people was a challenge.”

WFP is working with partners on the ground, identifying and supporting people like Khadijah, Mustafa and Salji, as well as registering families hosting displaced people to provide them with additional food as needed. Local authorities in Al-Hasakeh are emptying schools to accommodate people arriving and in need of food, clothes and other essentials.

This story was written by Pauline Gay and originally appeared on WFP’s Insights.

At war with hunger

Conflict is the #1 driver of hunger in the world, and Syria is one of the most conflict-affected countries right now. Learn more about this vicious cycle at our Conflict and Hunger hub.