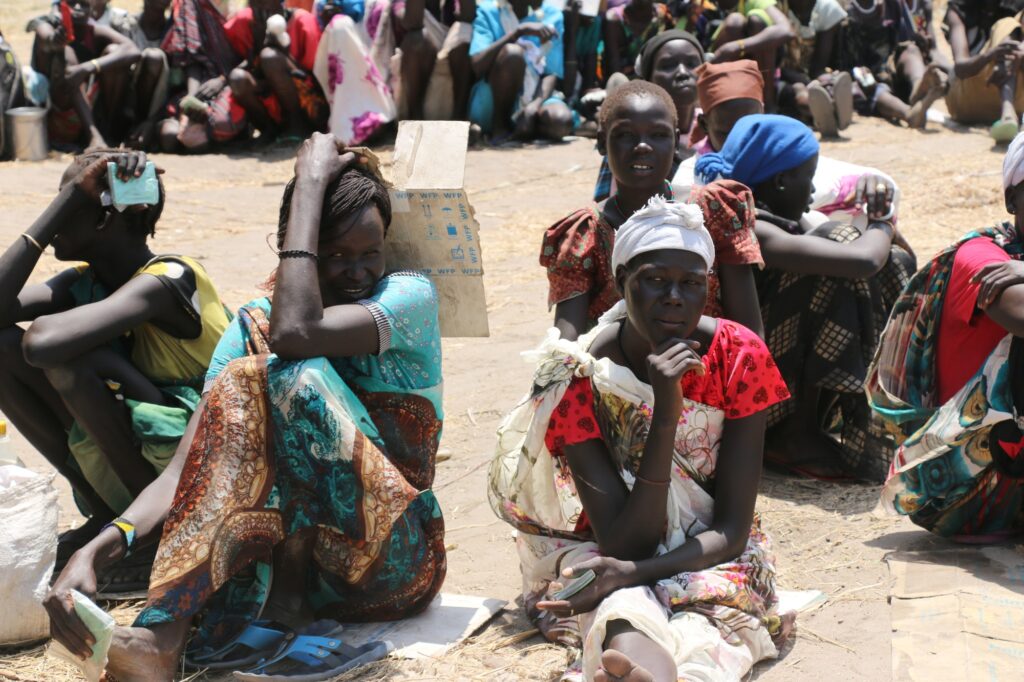 On February 20, 2017, famine was declared in South Sudan, the world’s youngest nation. The combined effects of civil war and drought have left nearly 5 million people food-insecure in the country, representing over 40 percent of the population. WFP Country Director Joyce Luma said in 2016 that South Sudan was experiencing a “deadly blend of conflict, economic hardship and poor rains.” The Kalma internal displacement camp outside of Nyala, Darfur, Sudan. The main WFP activities here in 2004 were general food distributions and supplementary and therapeutic nutrition.

Conflict is not a new phenomenon in Sudan and South Sudan — it has been ongoing for close to 40 years, causing millions of civilian deaths over that period. Long-running tensions in the era following British colonial occupation between the Arab-Islamic central government in Khartoum and the predominantly non-Arab south in Sudan led to one of the longest civil wars in African history. First from 1955 to 1972, and then again from 1983 to 2005, conflict between the North and South of the country has persisted, culminating in the Comprehensive Peace Agreement that led to South Sudan’s independence vote in 2011.

The War in Darfur, parallel to the broader Sudanese Civil War and isolated to the western-most region of Sudan, is still ongoing and represents a microcosm of the ethno-religious tensions playing out the in country. Darfur captured international headlines when U.S. Secretary of State Colin Powell declared in 2004 that genocide was occurring in Sudan in testimony to the U.S. Senate. Sudanese President Omar Al Bashir, along with six others, was later indicted by the International Criminal Court for genocide and crimes against humanity. Haja Degere was one of the thousands of internally displaced people of Sudan in 2005. She was one of 69 female volunteers who collected grains from WFP airdrop areas.

Darfur has been labeled the “first climate change conflict” by many observers, given the convergence of environmental and political factors leading to conflict. Sudan and the Darfur region is home to diverse ecological zones, ranging from arid deserts in the north to semi-tropical environments in the south. In the decades leading up to the 2003 outbreak of war, the Sahel region of northern Sudan had witnessed the Sahara Desert advance southward by almost a mile each year and a decrease in annual median rainfall of 15 to 30 percent.

These long-term climatic trends have had significant consequences for Sudan’s two predominant — and sometimes competing — agricultural systems: Smallholder farmers relying on rain-fed production and nomadic pastoralists. Agriculturalists in Sudan are predominantly ethno-African, while pastoralists are disproportionately of Arab ethnicity. Fast-moving desertification and drought slowly eroded the availability of natural resources to support livelihoods and the peaceful coexistence of these two groups in the region. Longstanding pasture and grazing corridors in Sudan began to shrink at a speed that traditional communal land tenure systems could not arbitrate.

These factors led then U.N. Secretary General Ban Ki-moon to comment in 2007, “Almost invariably, we discuss Darfur in a convenient military and political shorthand — an ethnic conflict pitting Arab militias against black rebels and farmers. Look to its roots, though, and you discover a more complex dynamic. Amid the diverse social and political causes, the Darfur conflict began as an ecological crisis, arising at least in part from climate change.”

The origins of the War in Darfur and the Sudanese Civil War are multiple and complicated, ethno-religious and environmental.

Today, in South Sudan, these same tensions are playing out. After independence, now lacking the unifying power of the independence movement, political, and later ethnic, discord began to surface. Tensions rose, and in 2013 an epidemic of violence remerged in southern Sudan. These events coincided with a major drought event in 2015-2016 in South Sudan and the Horn of Africa.

The U.N. Environmental Programme indicates that mean temperatures are likely to increase across Sudan and South Sudan in the coming decades, and yields for major crops like sorghum may fall by as much as 70 percent in that same period. The cycle of conflict and drought will continue.