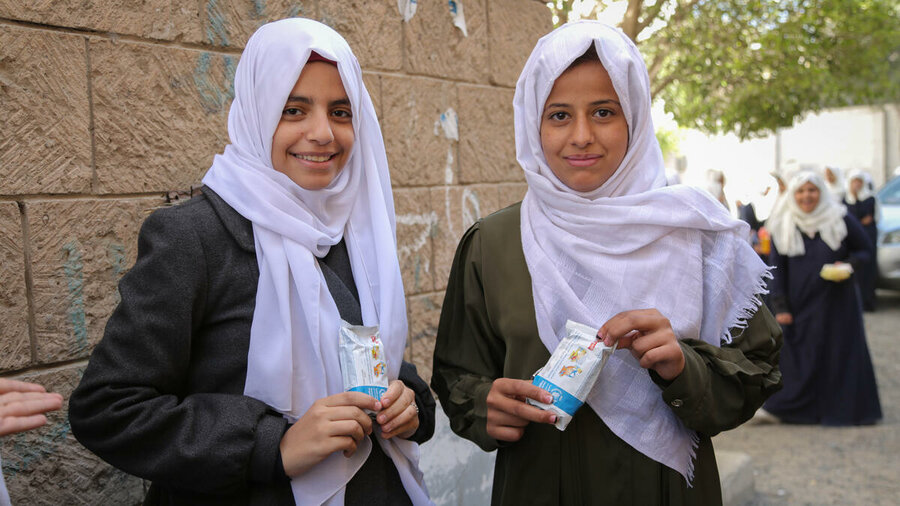 “We are facing the biggest hunger and education crisis in history,” says Carmen Burbano, head of school feeding at the U.N. World Food Programme.

A report published by the U.N. World Food Programme today confirms 370 million children were robbed of access to nutritious meals when schools shut in 200 countries in April 2020 to halt the spread of COVID-19. 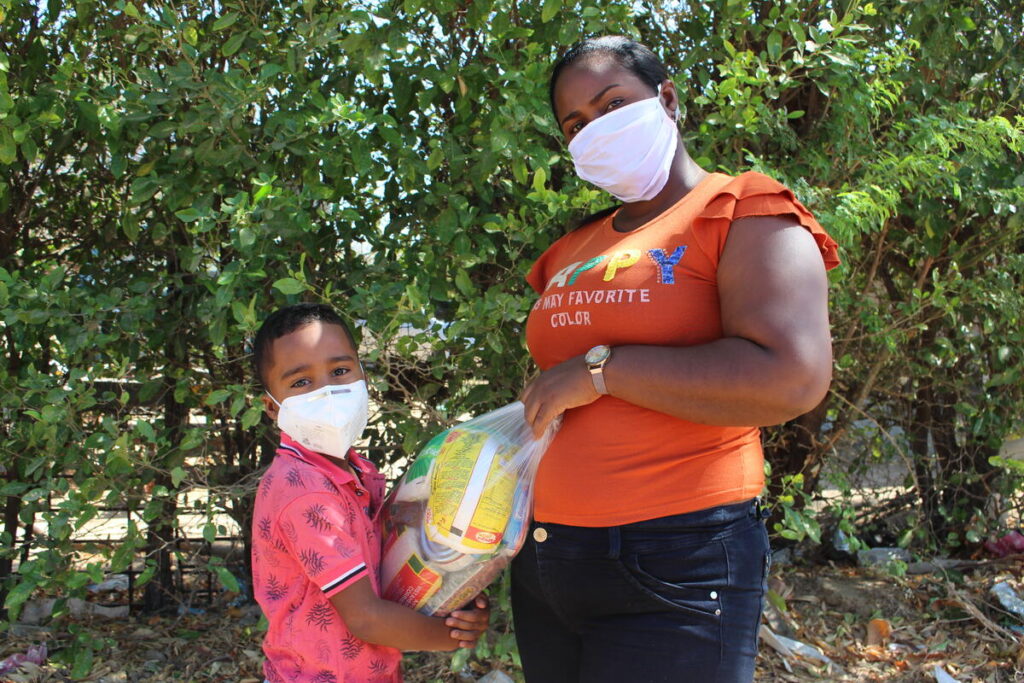 Colombia: A mother of three in Riohacha, receiving her take-home ration.

“As a matter of urgency, we need to make sure children go back to school, and back to receiving these meals that they were receiving before the pandemic,” says Burbano. “To do that we need a coalition of partners that come together to help governments scale up access to these programs.”

History-making progress in delivering food to schoolchildren around the world that took years to achieve was rolled back in an instant — before the pandemic 388 million, half the world’s population of schoolchildren, were receiving school meals. 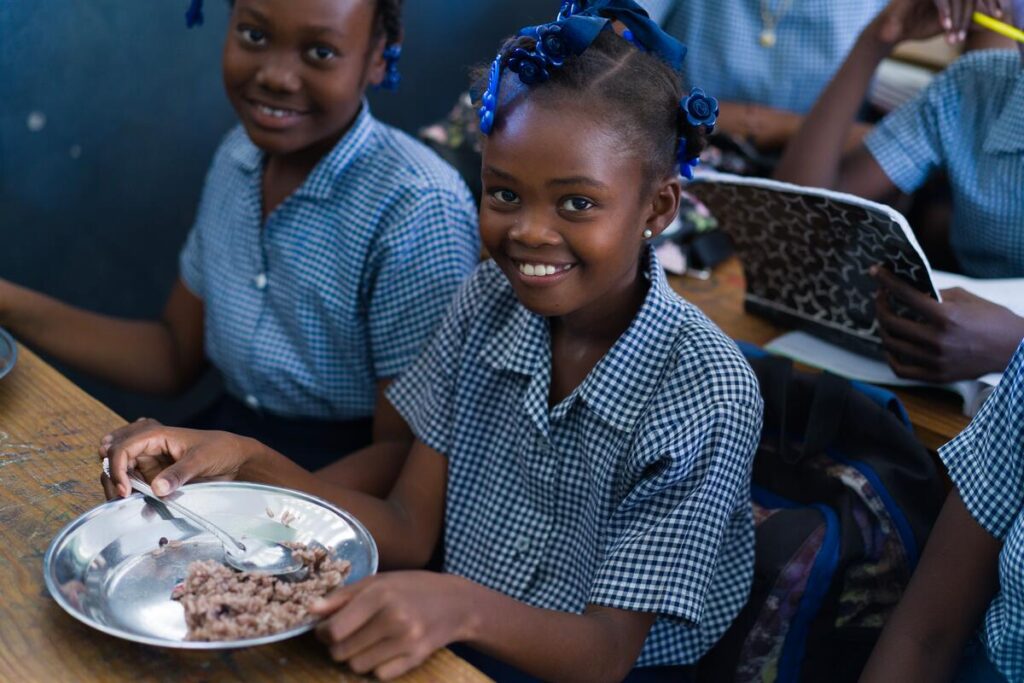 “We had this wonderful picture of an expanding safety net, with school feeding a growing priority for more and more governments around the world,” says Burbano. “Then COVID-19 arrives and smashes it all.”

Last year, a total of 39 billion meals were missed — that is nothing short of a tragedy, says the ‘State of School Feeding Worldwide 2020’ report.

Meals not only supply children with the critical nutrition they need to learn better, they serve as an incentive for parents in some of the world’s poorest countries to send their children to school. 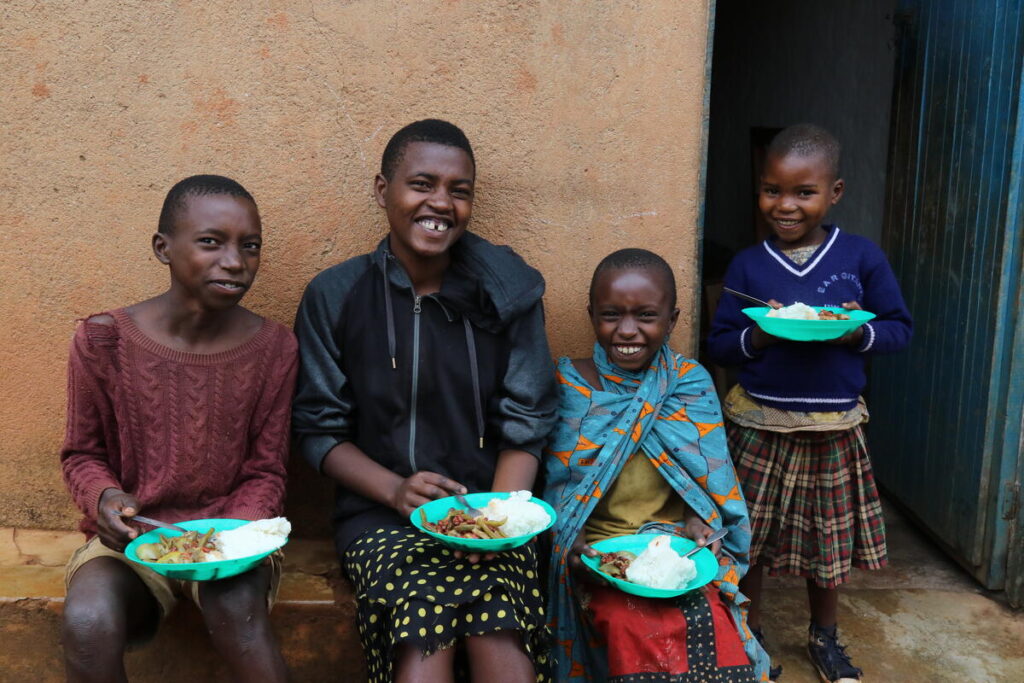 Rwanda: A family with take-home rations from a school running a home-grown school meals program.

“The longer children stay out of school, the less likely they are to return,” says Burbano. “We know that we are at risk of losing about 24 million children that will never come back to school — particularly girls.”

She adds: “This is exacerbating early marriage, child labor and early and teen pregnancies.”

From Afghanistan to Zimbabwe, access to education powers aspirations that trample on traditional expectations for girls and young women to marry early, or sacrifice education for work. 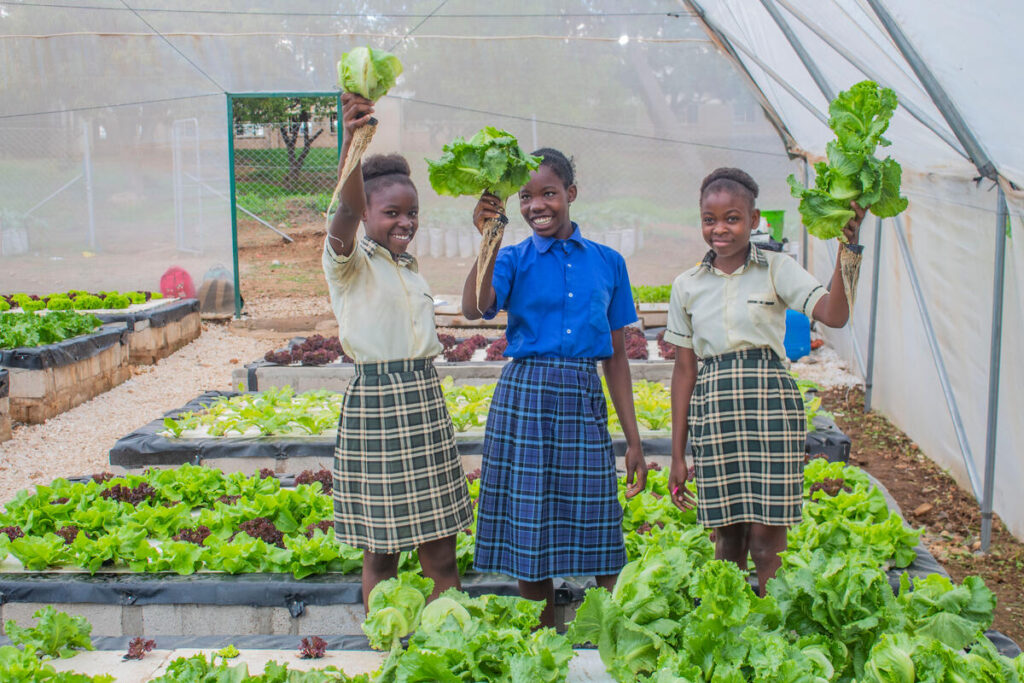 Zambia: Students at the Bulungu primary school harvesting lettuce grown in a hydroponics garden, for their school meals.

“This is going to have long-term consequences for them — and for their countries’ too,” says Burbano. “Entire generations of children are missing out on their education, on their wellbeing, on having proper meals and other health services in schools.” 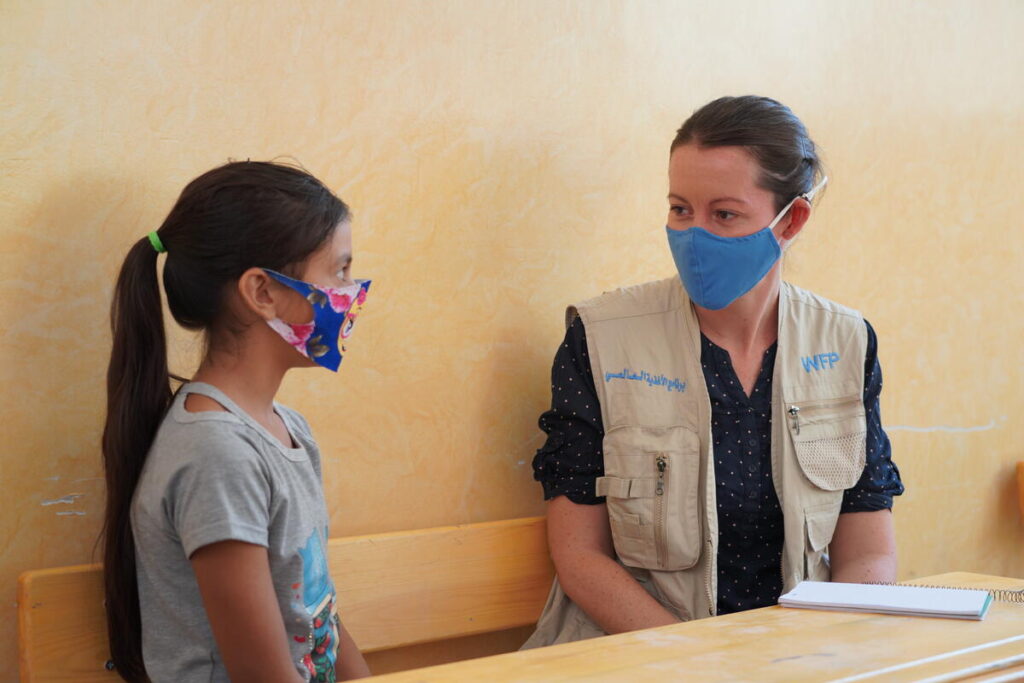 Syria: A schoolgirl in Aleppo speaks to WFP’s Jessica Lawson.

“The huge inequalities the pandemic is creating, combined with the poverty children live in, the lack of food that they now have, the lack of connectivity to education — it’s just going to exacerbate inequalities now and for years to come.”

The solution? “Give families incentives to bring those children back to school,” says Burbano. “We have robust evidence that school feeding is one of the strongest incentives, particularly for girls.”

This requires swift action by governments, working with the U.N. World Food Programme and its partners.

At the outset of the pandemic, the U.N. World Food Programme was quick to secure take-home rations so that children and their families, especially in the most remote locations, would have access to food. Burbano is enthused that “70 countries modified their school feeding programs.” 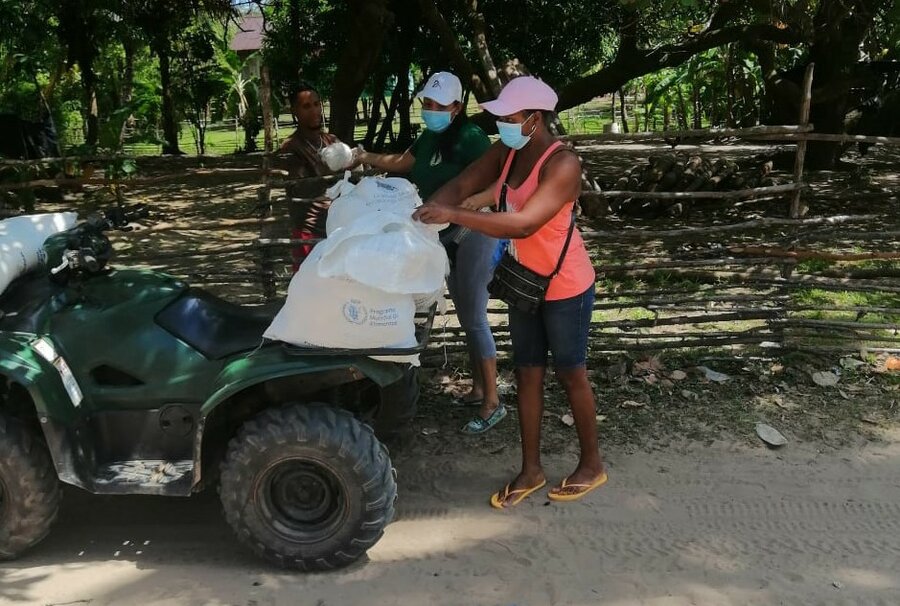 “But that’s not enough — we need to help countries restore access to these vital programs that were so active and vibrant before the crisis hit. We need to go back to pre-pandemic levels of coverage of school feeding programs and other health services.”

For school meals do not just feed children — they nourish economies.

“When school feeding programs are combined with the local purchase of food, they can be a game-changer for small scale farmers and different people in the community, including catering companies that are by and large managed by women,” says Burbano.

“So it’s an employment opportunity. It is a market opportunity for farmers. It increases the quality of food that children receive, making their diets more sustainable and more diverse. All this helps with climate change because it shortens supply chains and reduces waste.” 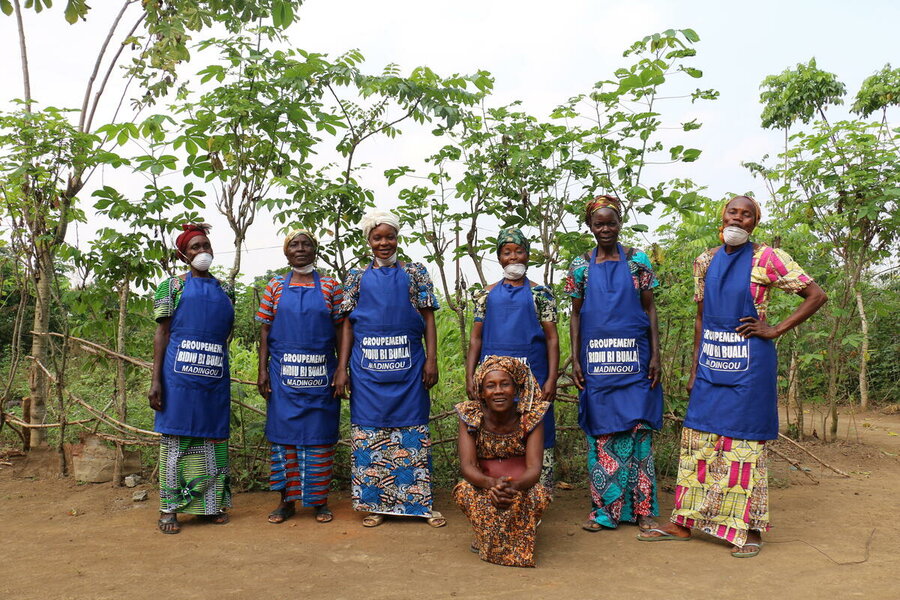 Congo: Members of the ‘Meal of the Village’ women’s group in Mandigou supply local delicacy ‘mbala pinda’ to schools.

In 2013, when U.N. World Food Programme launched its first State of School Feeding report, only 20 percent of low-income countries had a school feeding policy — by 2020 the figure was 75 percent. 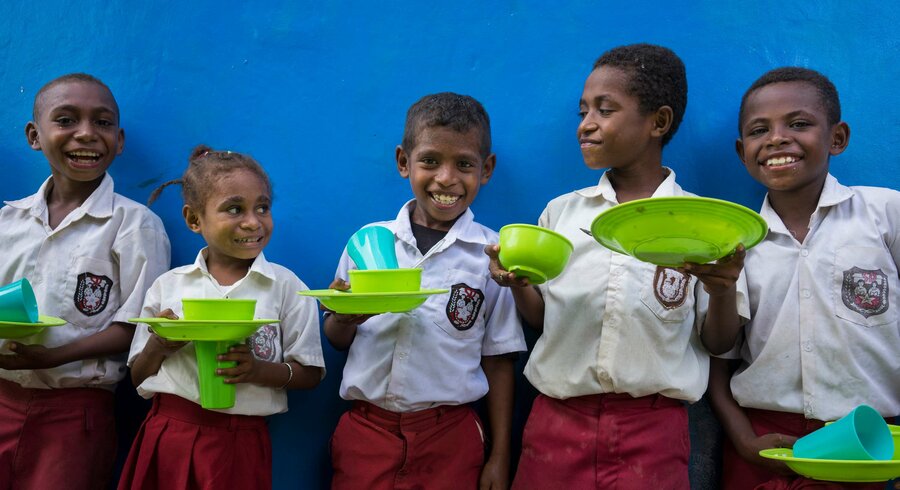 Lunchtime at a WFP-supported school in Sarong district, Papua, Indonesia in 2017.

“This is a really big deal,” says Burbano. It means “governments are investing in these programs and prioritizing them. For low-income countries, it’s a big decision to put their dollars into school feeding programs — but they do that because that helps to build human capital and support local development.” 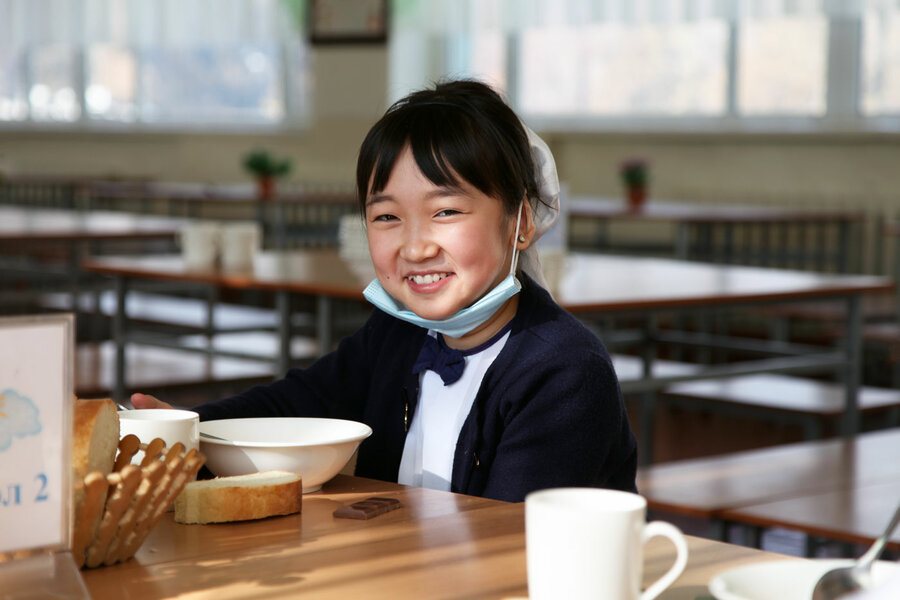 Kyrgyzstan: Aida is among 850 pupils who receive meals at her school near Bishkek.

According to the report, 90 percent of funding for school meals programs comes from governments, 10 percent from donors — encouragingly, 80 per cent of governments have school meal programs in place.

“This means that, again, countries have discussed, have debated, have passed policies or laws that make school feeding a national priority,” adds Burbano. “We need to work with them to help them open up their school systems as soon as they can.” 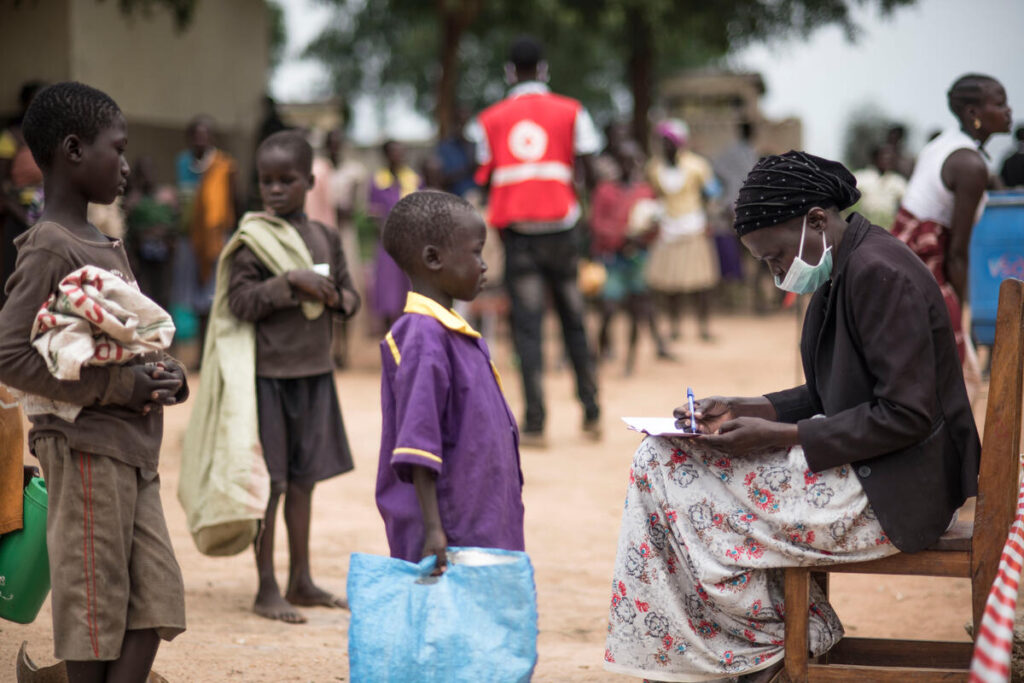 Uganda: The line for monthly rations at the Napumpum primary school in Karamoja.

The U.N. World Food Programme report comes ahead of the International Day of School Meals, and the African Day of School Feeding (as part of ‘Agenda 2063: The Africa We Want’, the African Union has recognized ‘home-grown school feeding’, where ingredients are sourced locally, as a critical tool in combatting hunger).

Inspired by the success of countries such as India and Brazil, Africa has made huge progress in the past decade. “The continent almost doubled the number of children that receive school meals between 2013 and 2020,” says Burbano. But challenges remain as “around 60 million of the world’s 73 million chronically hungry school children are in Africa.” 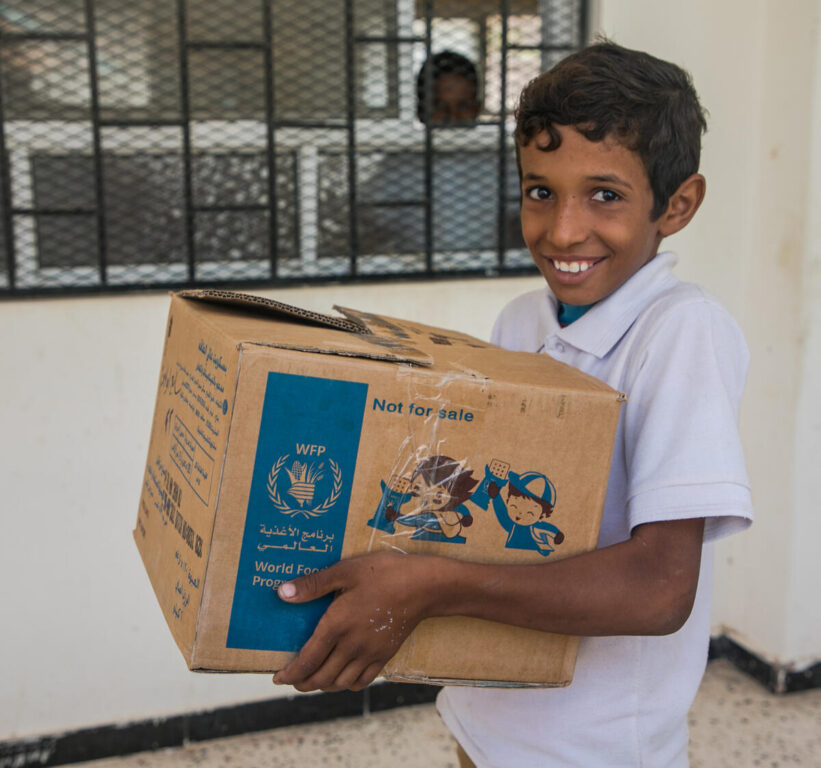 Yemen: High-energy biscuits arrive at a school in Alburaiqa.

“We need governments to lead the way by telling us what their challenges and gaps are and how we can help.”

She adds: “We need the donors to continue supporting governments with scale-up, because funding, particularly for low-income countries, continues to be the most important bottleneck.