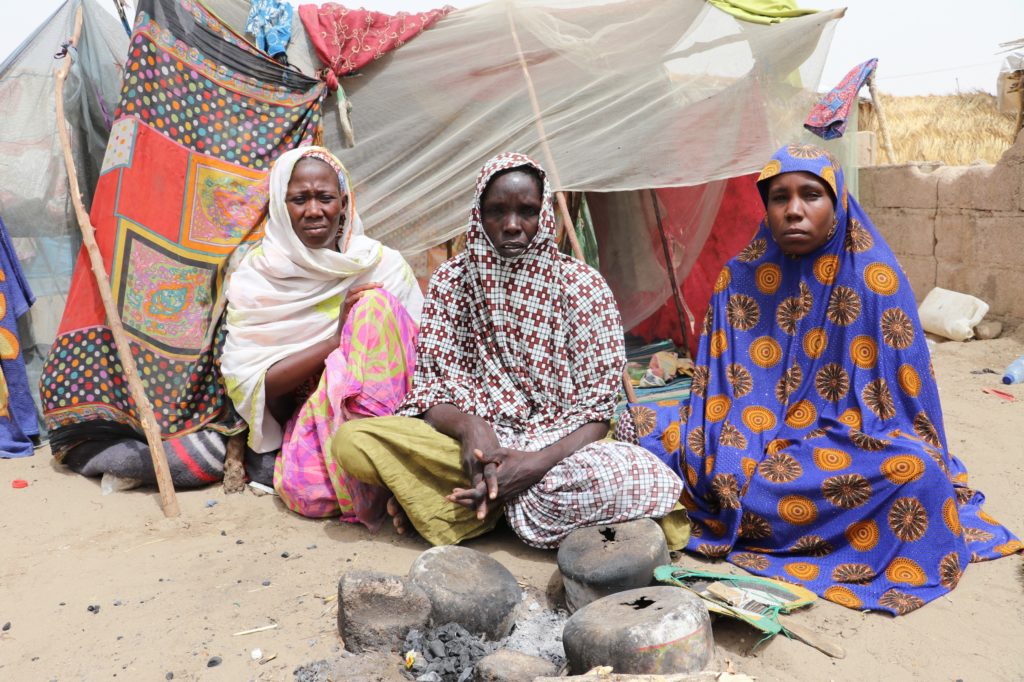 For three weeks, home for Zarah Modu has been a cavernous tent that serves as a reception center for internally displaced people (IDPs) arriving in the town of Monguno. There is no privacy here. Men, women and children sleep together in the same space, something totally alien to the culture of this region. Zarah’s two sons, four and three, lie sprawled across her, fast asleep in the stifling heat. They are among the latest victims of the long-running conflict in Nigeria’s northeast, which has driven close to 2 million people from their homes over the past decade.

When fighting escalated around Kukawa in November 2018, Zarah heard that thousands of people were fleeing. She thought she was safe in her village just outside the town.

“Fighters came one day. They told us to leave and started to burn our homes. We just ran. I got separated from my husband. I still don’t know what has happened to him,” says Zarah, who was nine-months pregnant at the time.

Monguno was the closest town along the way. After a day of walking through the bush, she could go no further. She had to beg for food for her boys. Luckily, she managed to get a lift in a pick-up from some men who were collecting firewood.

Reaching Monguno after two days of travel, Zarah was exhausted. The town was full of new arrivals. Some were camped by the roadside while others had merged into camps dotted around the town. Over 80 percent of those arriving were women and children. 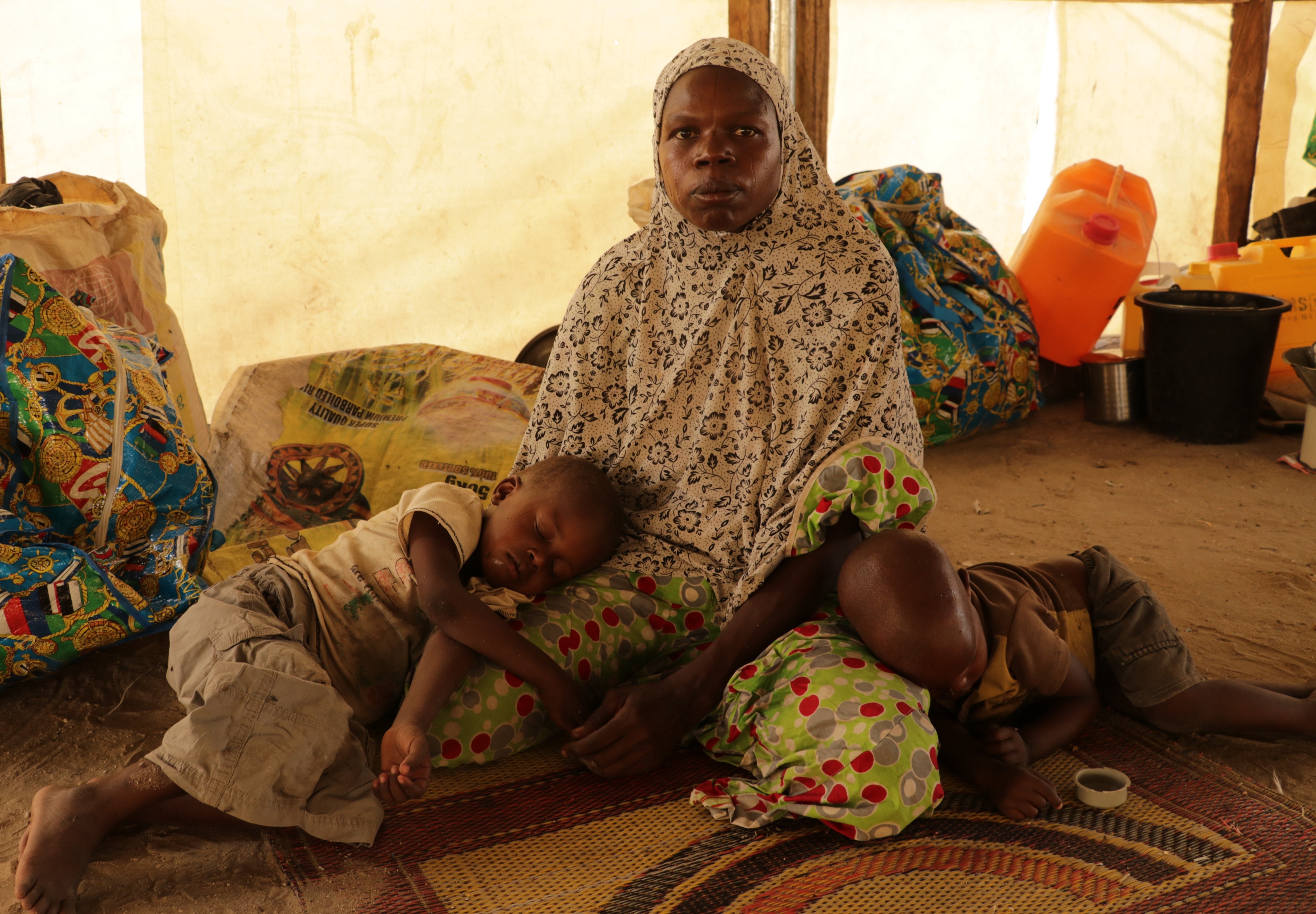 Zarah Modu and her sons at the reception center in Monguno.

Zarah spent a night on the roadside at a military checkpoint where people were being screened before being allowed into the town. That night, she went into labor. In a state of distress, she was noticed by some passing UN aid workers who took her to a local clinic. Thirty-six hours later she gave birth to a baby boy. Tragically, her newborn son died within hours from complications resulting from the stress of Zarah’s ordeal. Now she is recovering her strength at the reception center.

Between November and February 2019, the population in Monguno’s 12 IDP camps swelled by over 18,000. Most were new arrivals from Kukawa, Baga and surrounding areas. 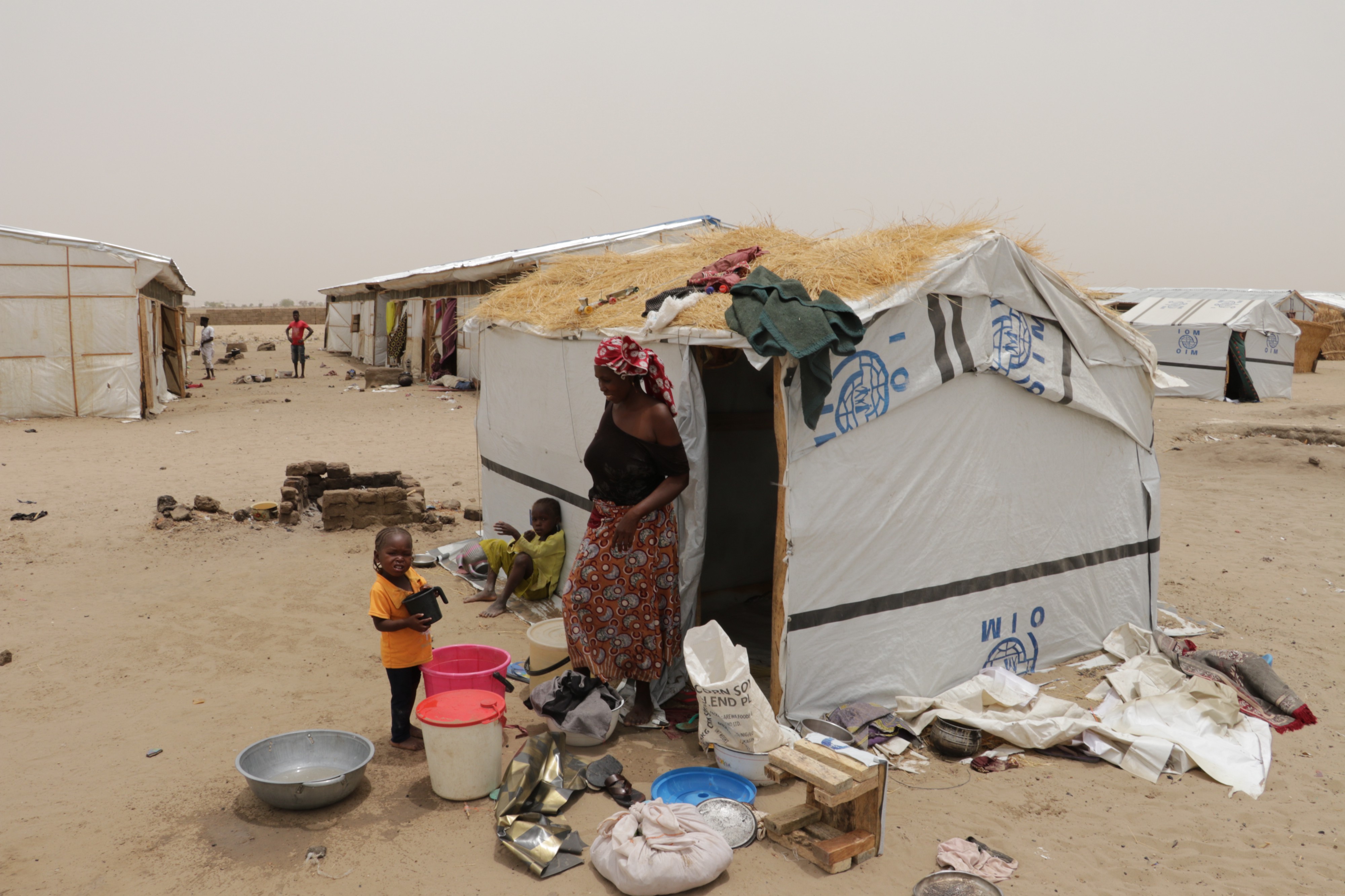 Thousands of new arrivals have swelled the population of Monguno’s 12 IDP camps.

“At the peak of the crisis in December, we had over 500 people arriving here each day. The place was overflowing,” explains Abdulaziz Shariff, from INTERSOS, the non-governmental organization which manages the reception center.

“People left their homes in a hurry. Most traveled on foot carrying very few possessions. I didn’t see anyone arrive here with food,” he says.

Now, daily arrivals fluctuate between 25 and 40. Most have been relocated to the camps dotted around the periphery of the town, which also house long- term IDPs who arrived from other areas of Borno State up to five years ago. 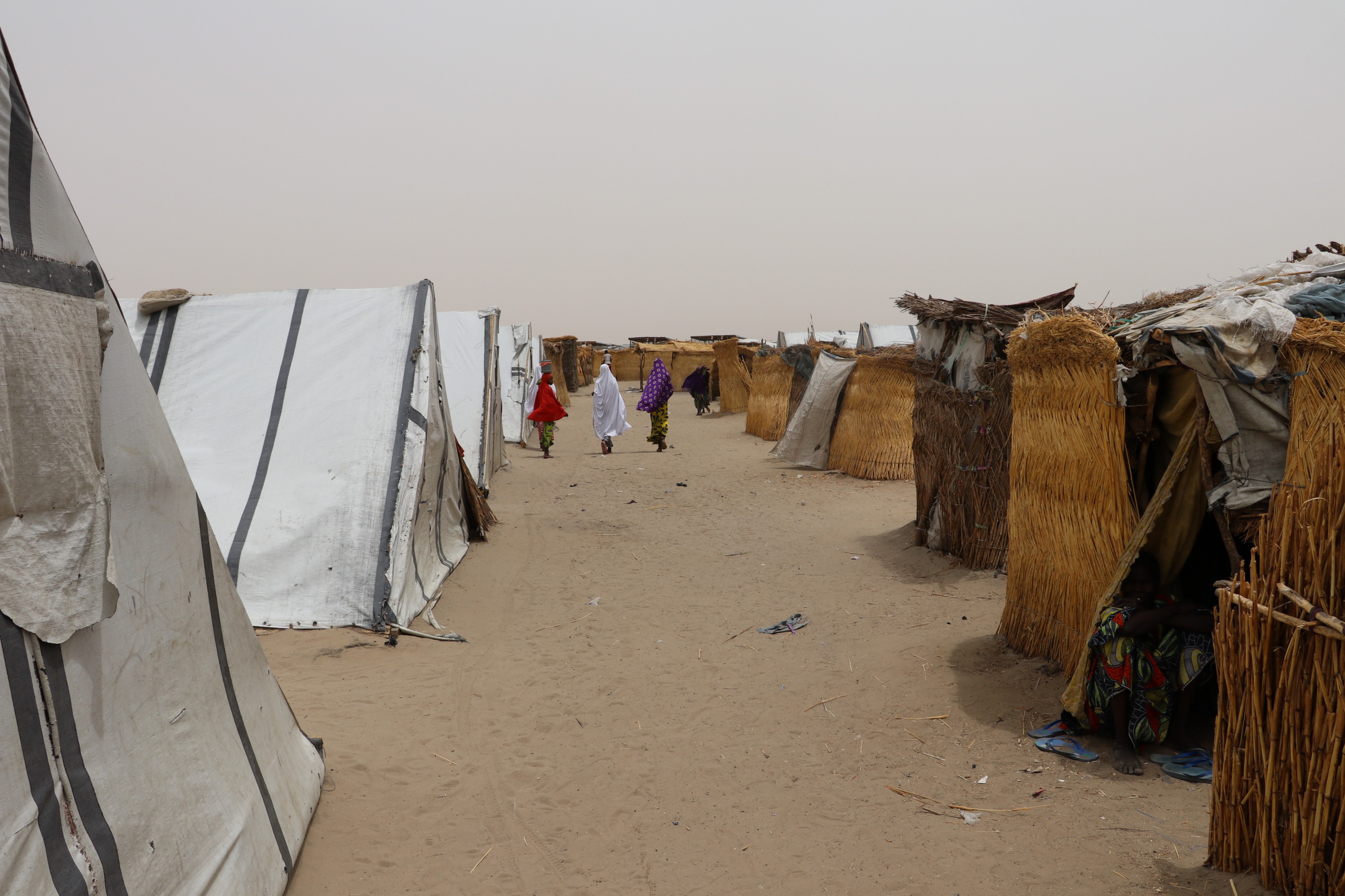 New shelters sit alongside those of long-term IDPs.

The only possession Zarah had when she arrived was a five-liter plastic jerrycan for carrying water. The other women in the shelter share their cooking pot, so she can prepare the food rations given to her by WFP, which stepped in to provide emergency rations to the new arrivals.

Since 2016, WFP has been working in Monguno with local partners, providing a lifeline to 40,000 people. The assistance comes in the form of vouchers that can be exchanged with local traders for a monthly ration of basic food items. Now the caseload exceeds 50,000.

“The markets are functioning well in Monguno, so vouchers are an effective way to support the local economy while also giving people choice in the food they buy,” explains Myrta Kaulard, Country Director with WFP.

WFP has also expanded its nutrition program and is providing fortified cereal to almost 33,000 pregnant and nursing women and young children, who are at risk of malnourishment. 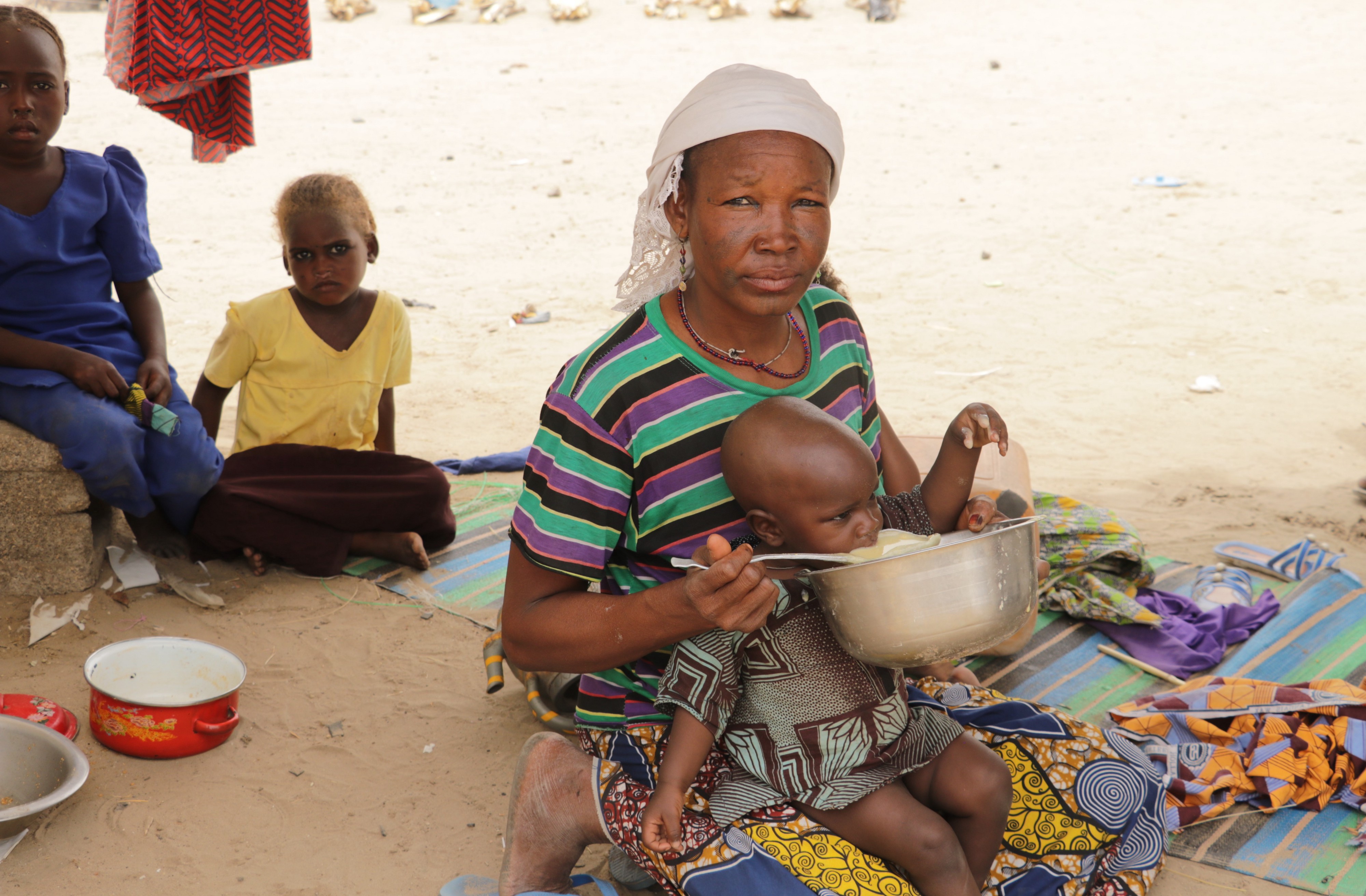 Fortified cereals provided by WFP are boosting the nutrition of children.

Despite the military presence, many here don’t feel safe. Lack of space means that some of the new arrivals are having to live close to the protective trench that encircles Monguno. Incursions from fighters who lie close by are an ever-present threat. There was panic in December when the town was attacked and many humanitarian organizations had to temporarily withdraw.

Zarah was only meant to remain in the reception center for 72 hours, but it’s likely she will be here longer due to overcrowding in the camps. Many families have been here for months, but finding available land to build more shelters is challenging.

Providing adequate infrastructure in the camps is also a challenge. Water here is a highly valued commodity due to its scarcity. The few boreholes that exist in the camps struggle to produce enough for the growing numbers of residents. Plastic jerrycans snake in long queues from the wells. They have been left by their owners who return throughout the day to move them up the line. 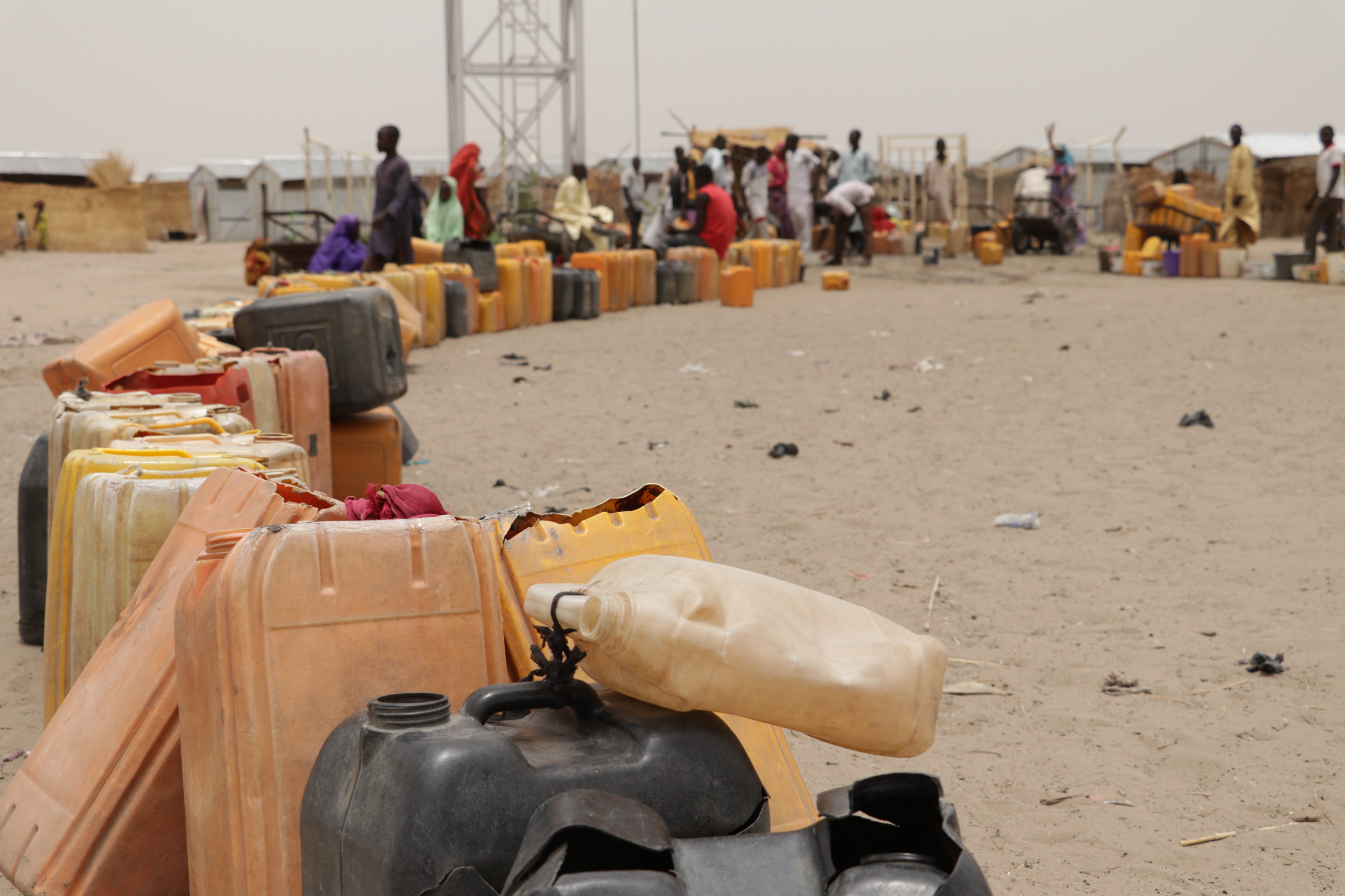 Queues of plastic jerrycans are a common sight at boreholes in the camps.

Seen from the air, the camps in Monguno appear to be taking over the town. Ordered grids of single-roomed shelters, their tin roofs glinting in the sun, stand out among the local mud brick houses. 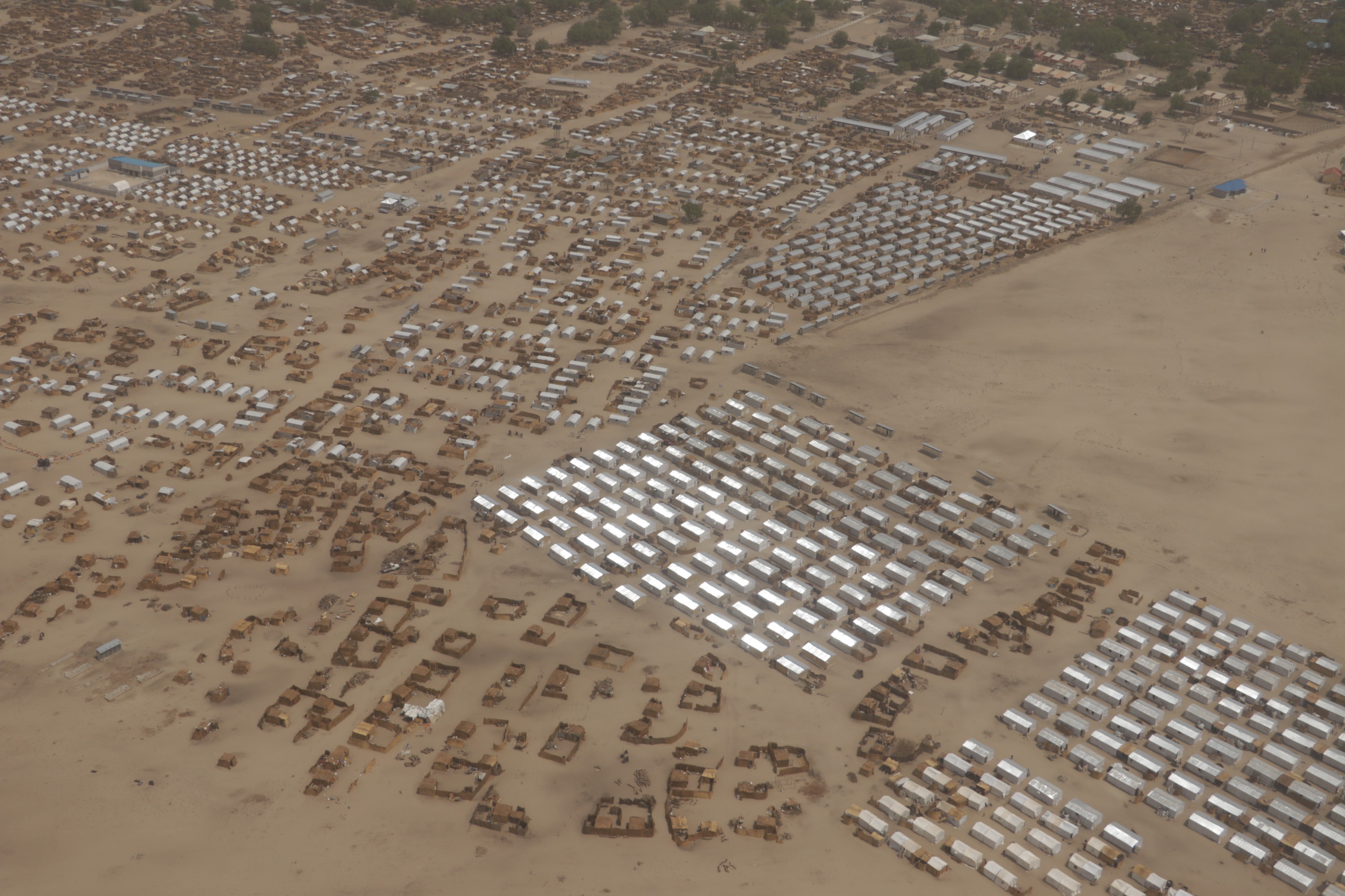 An aerial view of Monguno, shows IDP shelters are taking over the town.

Some of the new arrivals appear to have fallen between the cracks. Barely 100 meters from the reception center, 54-year-old Osman Haske and his family are camped out in the shell of an abandoned house. With no roof, the family is exposed to the elements. Osman arrived in Monguno with 40 other families when fighting flared up in his hometown of Baga. He says he was never aware that he needed to register at the reception center, which is the first step towards receiving humanitarian assistance.

Osman Haske and family camp out in a building with no roof, formerly used as a toilet.

“We found this place when we first arrived. It was being used as a toilet by local people and it took us four days to clean it out. Since then we’ve been surviving day-by-day. My main worry is how we will manage here when the rains come in a few weeks.”

Osman’s family is comparatively lucky. Outside, a handful of flimsy shelters are scattered around, which offer scant shade to the huddle of women and children trying to hide from the searing midday sun. Made from scraps of tattered material strung over sticks planted in the sand, the shelters have the impermanence of play-houses made by children. But for the past four months they have been homes. Toma Mohammed and her neighbor Amina Umaru live here. The vicious conflict playing out in Borno has left both of them deeply scarred. 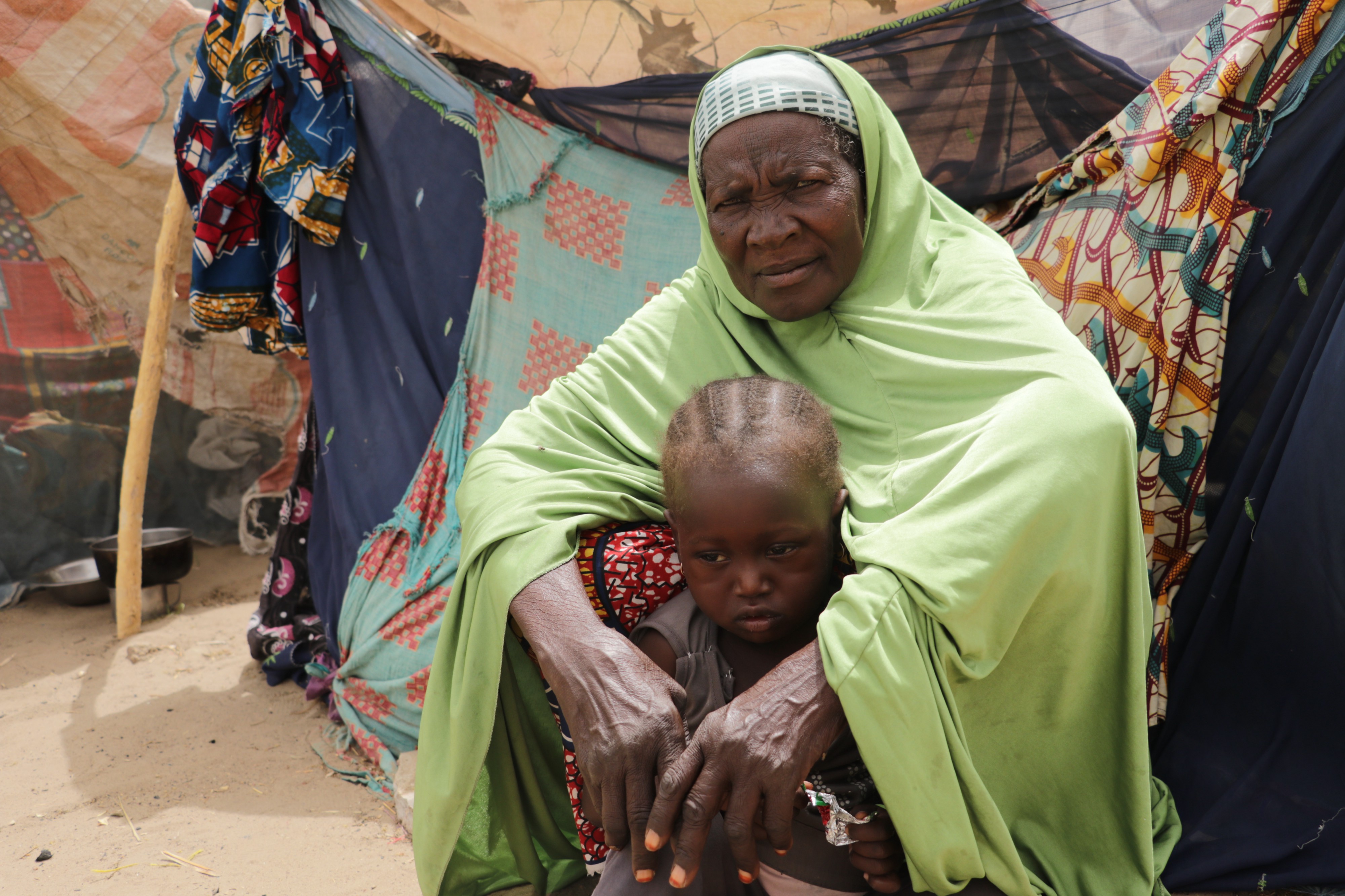 Amina Umaru, pictured with her granddaughter, risked her life to bury her husband, killed by fighters.

65-year-old Amina saw her husband shot and killed when fighters attacked Baga. During the attack her son disappeared and she hasn’t seen or heard from him since. Amina managed to hide with her granddaughter, risking her life to return at night to bury her husband in accordance with Islamic tradition, before fleeing to Monguno.

Toma managed to escape Baga with her husband, six children and four grandchildren. The conflict first came to her village seven years ago when her eldest daughter was kidnapped as she went to collect water one morning from the village hand pump.

Then, in November last year, she suddenly re-appeared, together with two children resulting from a forced marriage with a fighter. But her daughter returned in poor health and the journey from Baga to Monguno proved too arduous for her. Last week she was admitted to the local hospital and the prognosis is not good. Toma is fearful she won’t come out alive. 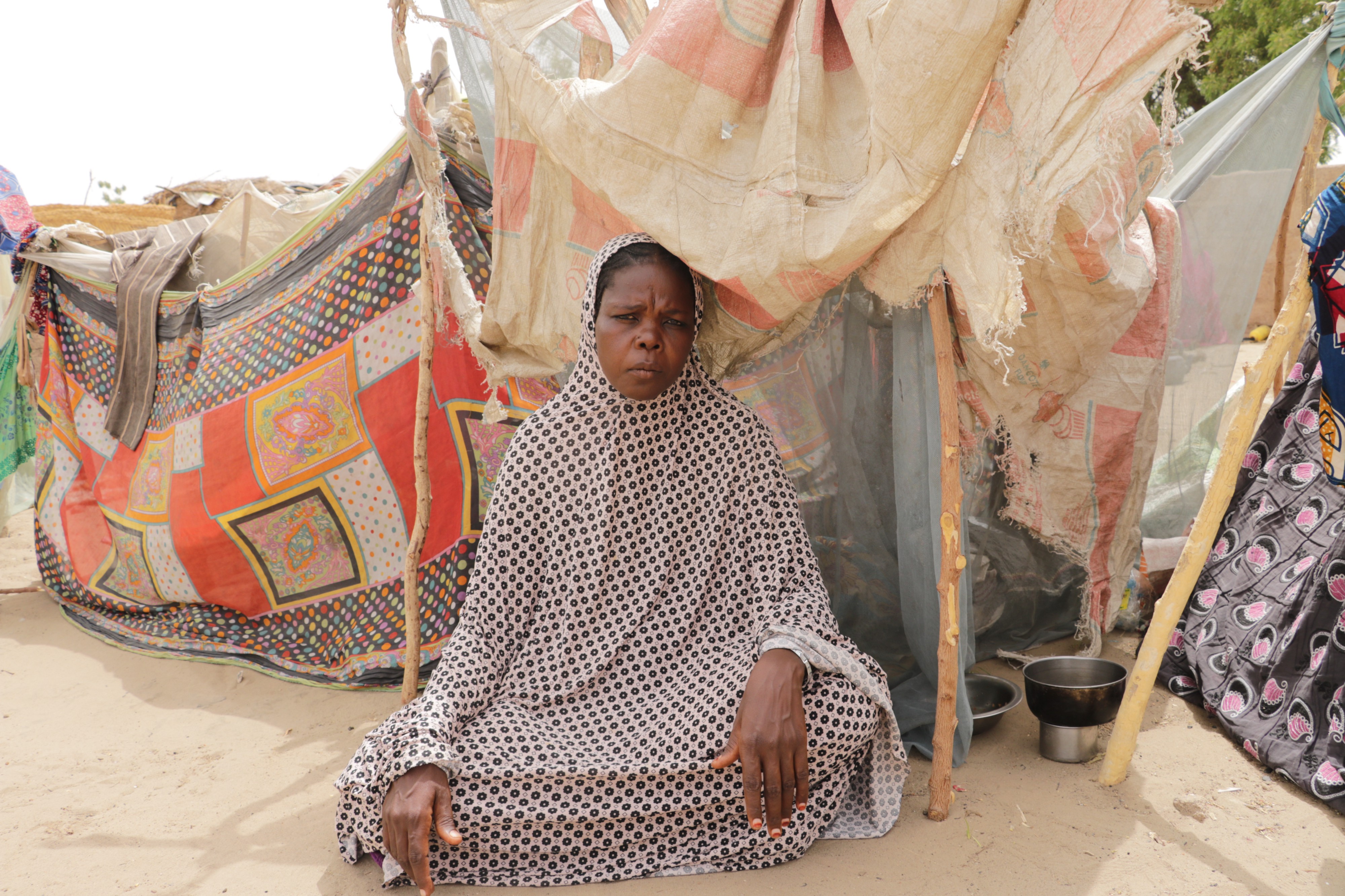 Fighting has taken a heavy toll on Toma Mohammed and her family.

Tragedy continues to stalk Toma. The simple act of gathering firewood here can have deadly consequences. Last month, one of her brothers was killed when he ventured outside the perimeter trench to cut wood from the bush.

“My husband still goes. I worry because Boko Haram are out there. It’s a big risk but the wood he collects is our only source of income,” she says.

Earning a livelihood is particularly difficult for IDPs in Monguno. Many used to rely upon farming but there is no spare land to cultivate. Few have the resources to enter into petty trading or start small businesses. While security remains precarious, most depend upon their monthly food voucher from WFP. 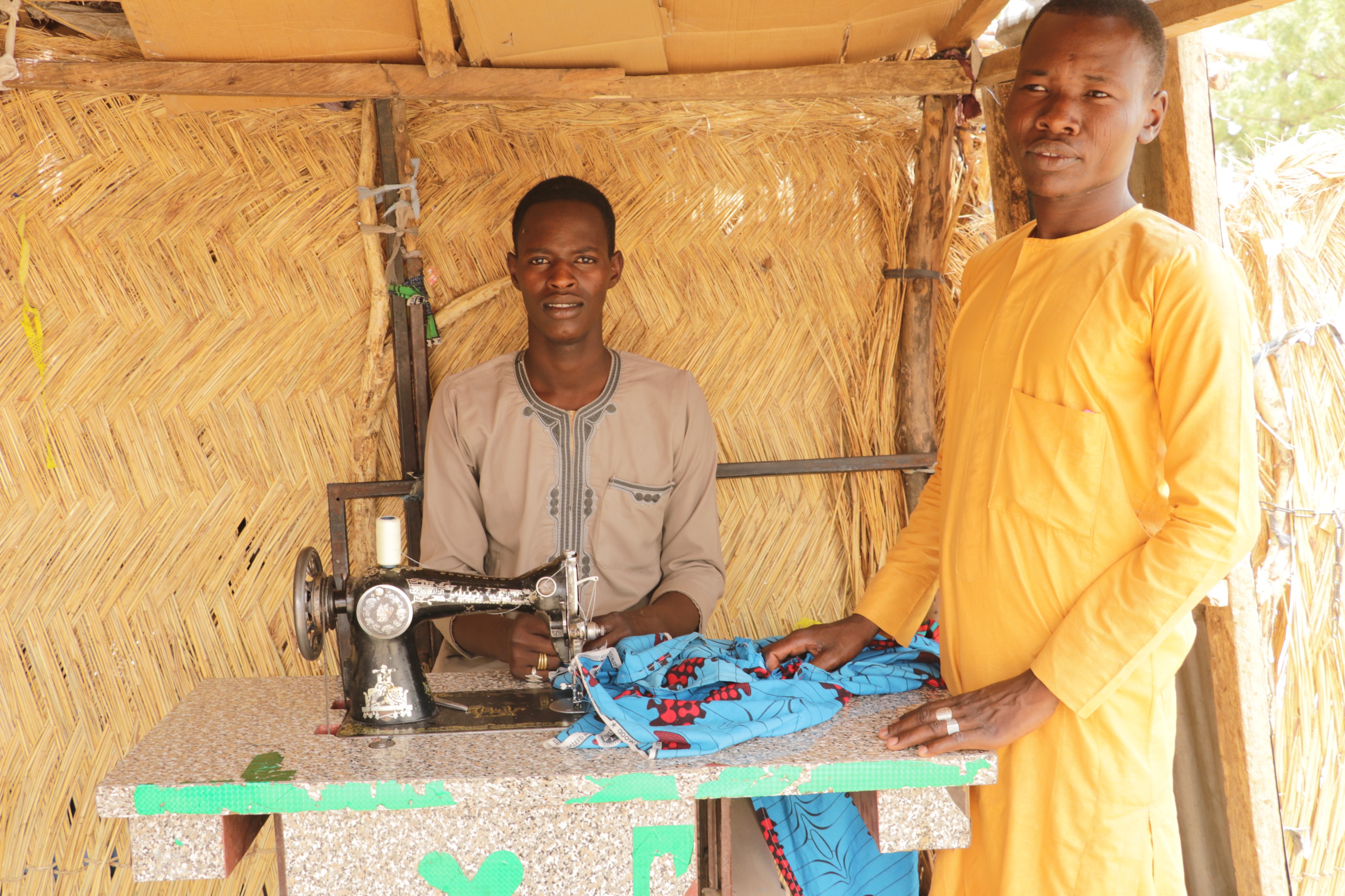 A tailoring business established by IDPs in one of the camps.

At the reception center, women are being enrolled in weaving classes run by a local organization. A group of 20, young and old, are learning to make an assortment of baskets and hand fans. As well as learning new skills, they are given tools and materials which should enable them to start generating some income for their families.

19-year-old Rukayya Abatcha arrived here from Baga in December. She exudes the confidence of someone twice her age and has taken responsibility for organizing the participation of other women from the community in the project. 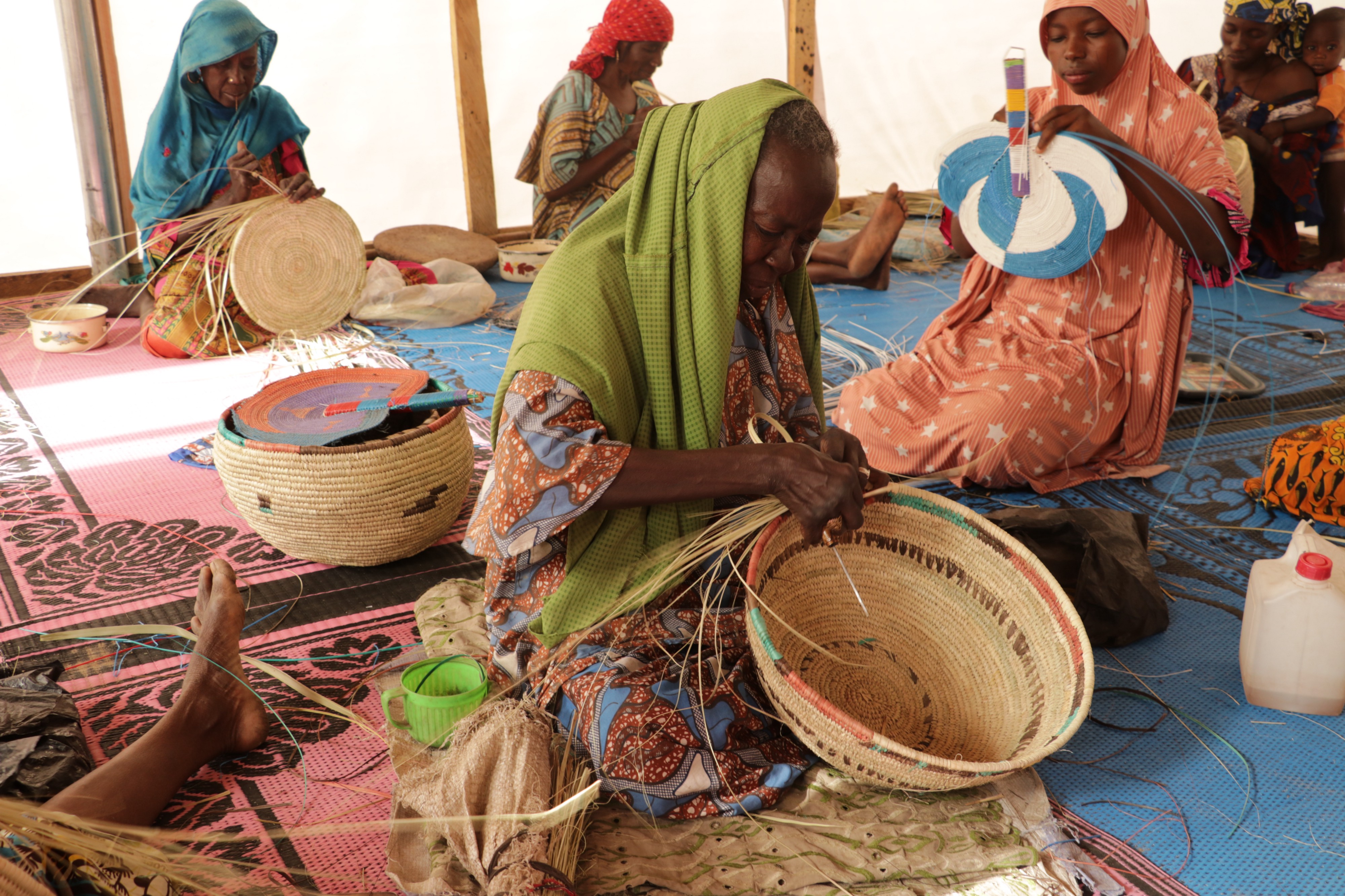 “This class provides us with a safe space where we can come together as women and forget about the stresses and worries that we are carrying. Bad things have happened to many of us,” says Rukayya.

Rukayya witnessed the killing of four of her uncles who refused to join the fighters when they came to recruit men from her neighborhood. Now, she has started a new life and is the sole breadwinner for her husband and young daughter. She also looks after her neighbor in the reception center, an elderly woman who is mentally handicapped.

“I can now make up to nine dollars a week making fans,” says Rukayya. “I will use this money for my family and also to help my neighbor. She has no-one else to care for her.”

Rukayya exemplifies the remarkable resilience of people here. Lives have been thrown into turmoil by this conflict. Many have witnessed extreme levels of brutality, violence or cruelty. Yet the kinship and bonds that exist between people, and their capacity to help each other regardless of individual circumstances, remains undiminished. 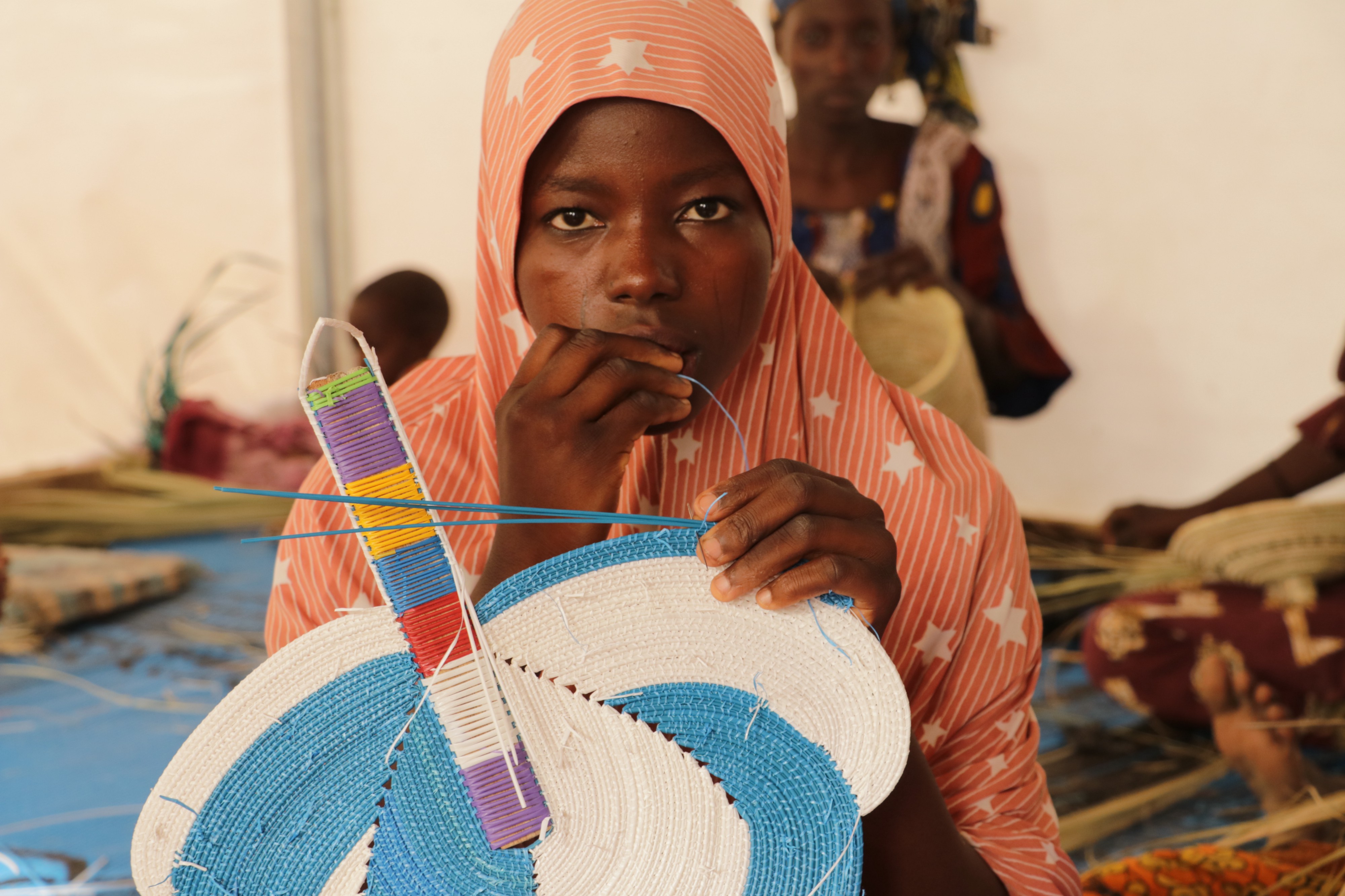 Rukayya Abatcha is the sole provider for her young family.