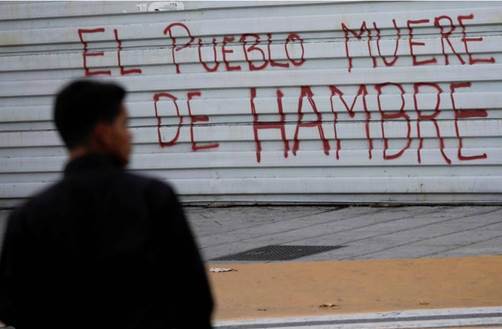 What Got You Here Won’t Get You There: Hunger in Latin America

Less than two years ago, José Graziano da Silva, the head of the U.N. Food and Agriculture Organization remarked that Latin America could become the first developing continent to eliminate hunger.

He had reason to be optimistic: Latin America was the only developing region in the world to achieve the 2015 Millennium Development Goal (MDG) of halving hunger.  On the heals of this success, leaders there quickly established the ambitious goal of eliminating hunger on the continent by 2025 – five years ahead of the global target under the Sustainable Development Goals.

Unfortunately, the trend lines for global hunger are heading in the wrong direction for the third year in a row.  After over a decade of steady progress, the number of undernourished on the planet is on the rise again, affecting an estimated 821 million people, or one in every nine of us. Latin America has not been spared.

In the lead up to the 2015 MDG targets, benefiting from industrial growth in China and other trading partners, middle income countries like Brazil ramped up food production and agriculture became an economic engine for growth. Major strides were made in mechanization and adoption of improved production technologies resulting in food surplus and generally affordable prices for major commodities across much of the region.

Governments also rolled out massive social safety net programs, like Brazil’s Bolsa Familia, designed to ensure access to food among the nation’s poorest segments. These efforts were replicated across the continent through instruments like conditional cash transfers and productive alliances. Mexico went as far as to introduce the “right to food” into its 2011 constitution.

Seven years out from the 2025 deadline, progress has plateaued. Today, the number of food insecure in the region has grown to 39.3 million people, or 6.1 percent of the population, from around 35 million in 2015. This “pause” has coincided with a slow economic growth, with the region’s many major economies just beginning to emerge from recession.

Globally, the number of extreme climate-related disasters has more than doubled since the 1990s. A full one-third of the region’s population lives in areas at high risk of climate-related natural disasters—events that disproportionately impact the agricultural sector. Losses to food production from extreme events are higher in Latin America than any other part of the world except South Asia. This holds back economic growth, driving prices up and throwing millions of urban consumers, in particular, over the poverty line, driving the poorest back into hunger.

Political instability is also on the rise. Nicaragua and Honduras continue to be affected by social unrest, Venezuela is in the midst of the continent’s largest ever humanitarian crisis and drug-related violence is on the rise across much of Central America and Mexico. While there have been important milestones in stemming violence — including Colombia’s deal with FARC — this peace remains fragile. In contrast, major gains in food security between 2000 and 2015 coincided with a period of relative peace and stability.

Finally, economic growth has not been widely shared in many countries. The region remains the most unequal in the world according to the World Economic Forum, with 10 percent of Latin America’s population holding over 70 percent of the region’s wealth. This inequality is also gendered: 8.4 percent of women in Latin America are food insecure, compared to just 6.9 percent of men, the largest disparity in the world.

To begin bending the hunger curve yet again towards zero in Latin America will require concerted effort to address these three challenges, in particular. Yet it is wishful thinking to believe the same measures that halved the continent’s hungry in the MDG period will continue to lead the steady march towards zero.

Instead, this task will require unprecedented levels of commitment and new ways of thinking. Not only is peace a pre-requisite to a zero-hunger world, but it must also be accompanied by a doubling down on political will to leave no one behind, a commitment to prosperous rural development and a renewed urgency to address the impacts of climate change.

Recognize this, and the region will be well on its way to fulfilling Graziano da Silva’s prophecy—a vision well worth investing in.

Dr. Chase Sova is the Senior Director of Public Policy and Research at World Food Program USA. Previously, he held posts with the UN Food and Agriculture Organization, International Center for Tropical Agriculture and the CGIAR Research Program on Climate Change, Agriculture and Food Security. He is based in Washington, D.C.

Dr. Andy Jarvis is the Director of the Decision and Policy Analysis Area in the International Centre for Tropical Agriculture (CIAT), Founder of the CGIAR Big Data Platform and is a Flagship Leader on the CGIAR Research Program for Climate Change, Agriculture and Food Security (CCAFS), based in Cali, Colombia.