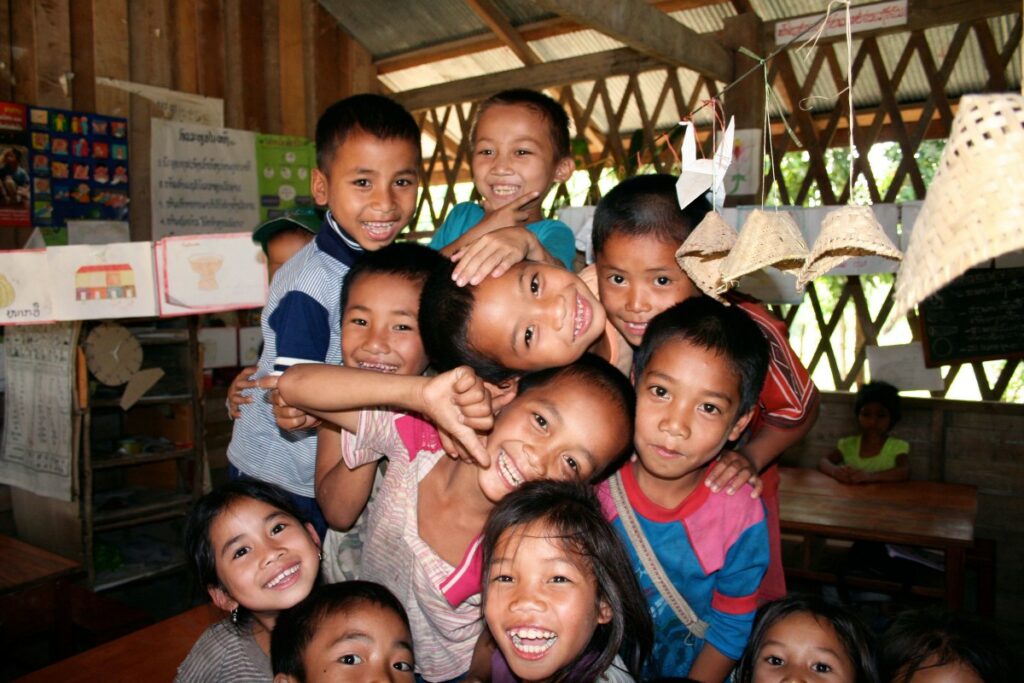 What Happens When Two Politicians Prioritize Partnership Over Partisanship?

For millions of hungry schoolchildren across the globe, it means the promise of a nourishing meal in the classroom.

In the late 1990s, Republican Senator from Kansas Bob Dole joined forces with Democratic Senator from South Dakota George McGovern to launch America’s first global program dedicated to feeding school-aged children. Both men recognized the importance of nutrition for the world’s most vulnerable children. Both men had witnessed the ravages of hunger with their own eyes, first as young boys growing up during the Great Depression and later as members of the military during World War II.

The U.S. launched its own domestic school meals program right after the Second World War, when President Harry Truman signed into law the National School Meals Act in 1946. Years of experience providing meals to disadvantaged children in America revealed just how effective school meals could be — not just in reducing hunger among children in need, but in boosting school attendance and literacy rates as well.

After recognizing the need for school meals in developing countries, Senators McGovern and Dole went to work. They reached across party lines, putting politics aside for the shared purpose of feeding the most vulnerable children in the world’s poorest classrooms. In 2002, their efforts paid off and the McGovern-Dole Food for Education Program was signed into law — aptly named after its two most tireless advocates.

A hallmark of the McGovern-Dole program is its focus on partnership. The programs require buy-in from local governments, recipient schools and even the students and families who benefit as a way to ensure both sustainability and effectiveness.

Since its inception, the McGovern-Dole program has provided meals to more than 22 million children in 41 countries.

Below are two countries that illustrate the lasting legacy of this program and why continued U.S. support remains so vital for the future of millions of children.

Children from a school in Laos who receive daily school meals from the McGovern-Dole Food for Education Program, distributed by WFP.

Why Laos Makes a Good Partner

Sandwiched between Thailand and Vietnam, Laos is a landlocked country with mountainous terrain, making significant parts of the country still inaccessible by road. Over the past three decades, economic growth has been steady, yet food insecurity remains widespread, especially in rural areas where the majority of the population lives.

Nearly half of all Laotian children under five are chronically malnourished, or stunted, meaning that many students enter school at a nutritional deficit, which cripples their growth and ability to learn.

To help overcome these challenges, the U.N. World Food Programme (WFP) and the U.S. Department of Agriculture (USDA) partnered in 2011 to provide schools meals to some of the country’s most vulnerable students. Right now, 140,000 children are reached through the McGovern-Dole program, ranging from ages five to 11.

What’s on the Menu

Every morning students receive a snack of corn-based cookies, fattened with oil and sweetened with sugar for taste and additional calories. The children eat this meal in metallic bowls and cutlery that they bring from home. At lunch, students receive rice, which in many places is supplemented by vegetables from a school garden or even fish from a school pond.

For many children, this food represents their only meal of the day. 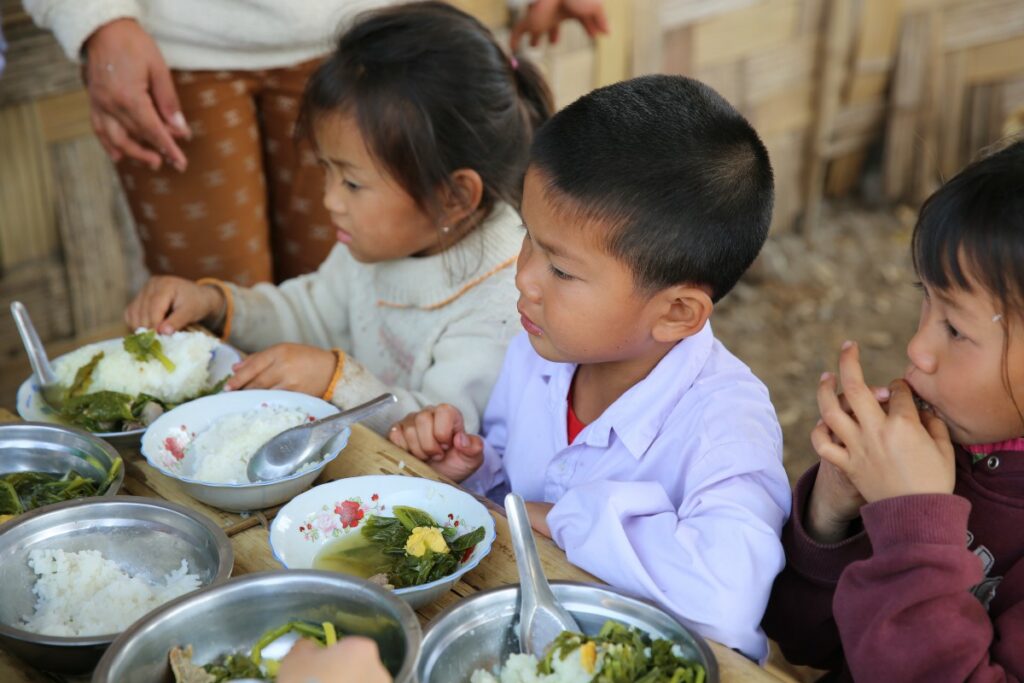 Laotian students sitting down for a meal of rice and cabbage. The rice is provided by the USDA through the McGovern-Dole Food for Education Program and the vegetables are sourced locally from a community or school garden.

Lunchtime Is a Team Effort

The school chefs vary significantly from school to school. Sometimes the teachers are the cooks. Other schools leverage local women’s unions. Some even utilize parent volunteers, illustrating how these meals are a community effort.

A vegetable patch in Laos which teachers, students and parents tend to; the produce is incorporated in to McGovern-Dole funded school meals.

The school lunch programs also impart lessons upon the children that go beyond a nourishing meal. For example, many of the schools incorporate lessons on why drinking clean water and washing one’s hands before eating and after using the bathroom is so important. Additionally, school meals cooks are given instruction on how to cook healthy meals. Lastly, training on farming best practices is provided to local farmers by “Village Education Development Committees,” which typically have strong parent representation.

Education helps to break the cycle of poverty and undernutrition: educated children, like the Laotian students pictured, grow into men and women who produce and earn more, are more likely to be able to provide enough food to their own children, and are more likely to send them to school.

Today attendance is at an all-time high across Laos. In fact, a recent study found that the attendance rate is at 97% for both boys and girls. In addition, attentiveness in the classroom has increased dramatically with now less than 20% of students classified as inattentive by two out of their three teachers.

For 5th-grader Phanphone, WFP’s school meals program has provided a nourishing meal where one did not previously exist. Before WFP started providing school lunches, Phanphone often returned to her home every day at lunchtime, even when there wasn’t anyone at home to help prepare a meal. When her parents were working in their nearby field, she would sometimes eat only chili paste if there was nothing else available.

Since the end of 2015, WFP has been making sure that children at Phanphone’s school receive lunches every day, in line with the Lao Government policy on school lunch. While Phanphone enjoys the lunch served at her school, what she likes most is taking care of the school garden set up with WFP’s help. Here, she helps grow fresh produce that is added to the school’s lunches. She says taking care of the school garden has taught her how to be responsible, and now she knows how to grow her own vegetables.

Thanks to the school meals program, Phanphone no longer needs to travel back home at lunch every day and can instead enjoy that time with her friends. 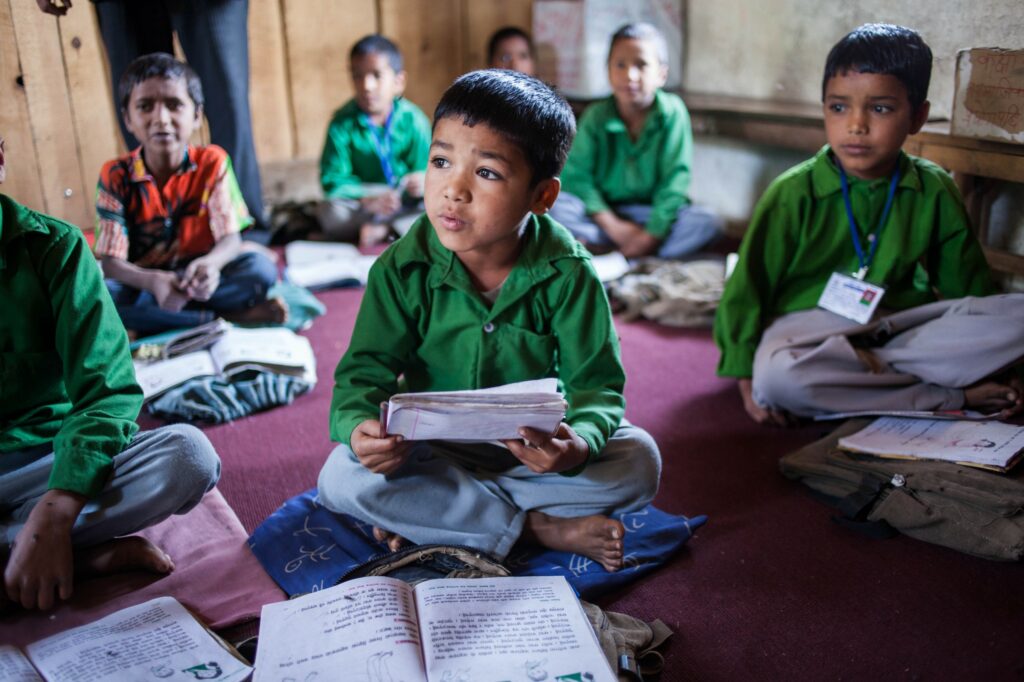 Collaborating With the People of Nepal

Like Laos, Nepal is landlocked by some of the most famous mountains in the world: the Himalayas. With a population of 26.6 million, Nepal struggles to keep agricultural production at pace with its rapid population growth. In fact, according to FAO, 4.5 million Nepalese are undernourished.

Nepal’s location makes it prone to seismic activity. Last year, a massive earthquake struck the South Asian nation, decimating farms, toppling local schools and increasing food insecurity among some of the country’s most vulnerable families. Today nearly 41% of children under five are stunted, with rates soaring as high as 60% in the hills and mountains of the mid- and far-western regions. These regions are also burdened by a high poverty index and a low literacy rate.

This is why the USDA’s McGovern-Dole school meal program has added great benefit to local communities. Similar to the program in Laos, students receive a fortified porridge, called haluwa, that’s made with enriched oil and locally procured sugar. Both preschool and primary school students ranging in age from three to 10-years-old benefit from the program.

This includes students like Anita, who bounds into her classroom every day excited and ready to learn. “After I eat the WFP school meal I feel very active,” explains Anita, “when I don’t eat, I feel hungry and exhausted and I don’t feel like writing.”

Left: Anita showing off her art work in front of her school. Right: Anita with her classmates during a break from class.

Thanks to the school meals, Anita, who is one of the top students in her class, is able to focus on her studies and dreams of something big for her future.

“I want to grow up to be a successful teacher,” says Anita during a mid-day break from class. “I want to help students and teach them new things.”

In schools that receive McGovern-Dole funding, WFP has partnered with World Education Inc. and Open Learning Exchange to develop activities and learning techniques that meet children at their level. Libraries have been installed in a number of schools and some even are receiving computers. Today more than 2,000 students in some of Nepal’s most rural communities have access to quality learning materials through digital platforms. Some schools have even started art classes, giving the students a new way to express themselves and enriching their educational experience.

Some schools in Nepal have built computer labs which give students access to digital platforms that enrich their educational experience and set them up with skills they may take to the workplace one day.

Over the last decade, school enrollment in Nepal has increased dramatically, but in mid- and far-western regions, many students still continue to struggle — nearly 21% of children between repeating first grade. The hope is that by providing nutritional support as early as the age of three, children will be better prepared both physically and cognitively to begin their studies.

Senators McGovern and Dole embodied the notion that partnership is the key to success. To this day, the McGovern-Dole International School Feeding Program continues to make a lasting impact on the lives of the most vulnerable children around the world.

Because if there’s one thing we can all agree on, it’s that no child should go hungry.