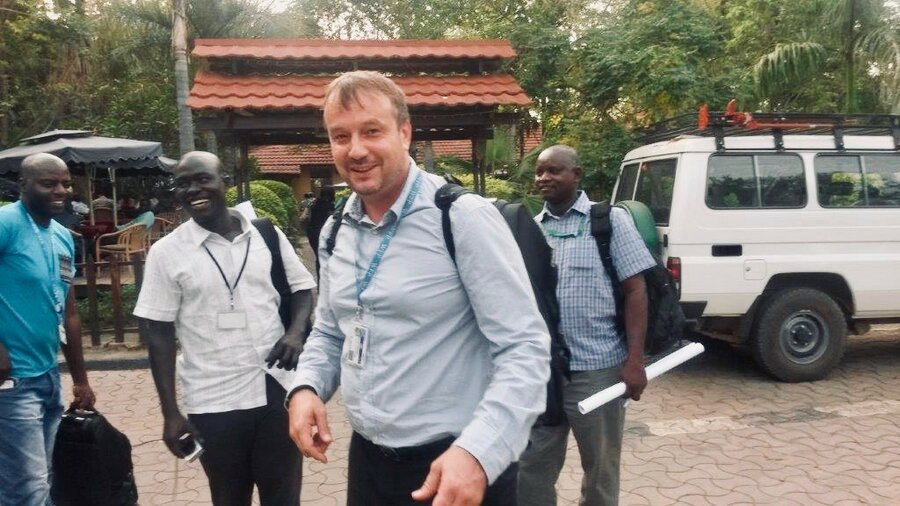 “I’m a beneficiary who survived a war. It makes me more resilient in my job.” He looks me directly in the eye.

In Baghdad, Nenad lived opposite, the neighbor with whom I shared home-baked bread (me) and fresh lemonade (he makes the best). With his fondness for loud 90’s Serbian music, and my obsession with finding peace of mind, we were hardly a natural fit as colleagues, let alone neighbours. But somehow it worked. I used earplugs, he knew the right approach when I was overwhelmed. “Just relax,” he sits me down outside on the lime green plastic chair. Next thing I hear is citrus fruit being sliced and juiced.

Nenad and colleagues in his beloved South Sudan.

It was after months — it seemed like years already, but time moves in a strange way when you live and work together in a Baghdad bubble — that he started to open up beyond the usual chat on work in the former Green Zone.

“We had to leave, or we would have been killed.”

This big, keen-eyed, friendly giant is a Serb who grew up in Pristina, Kosovo. It was 1999, and overnight everything changed. Two communities became enemies. “I had just got a contract at a power plant, as a junior engineer,” he recalls. “I was passing in front of the gas station, and there was this huge line of cars. My sister told me the war had started.” It’s like a scene from a movie.

“We had to leave, or we would have been killed. Loved ones died being tortured with hunger and thirst. The fact that you almost lose everything… My wife, children, mother, father, sisters survived. For that I am beyond thankful. But we became homeless and escaped to Belgrade.”

Nenad and his family became internally displaced persons. They registered with the U.N. World Food Programme and UNHCR, who provided assistance with food and shelter kits.

“We sold our apartment at 30 percent of the value and used the money to pay for a portion of the new apartment. There were 12 of us in 80 square metres, sleeping on the ground on donated mats. We kept them for a long, long time. But it was always so cold. We had no bed, no forks, no knives. We got a plastic fork and I remember our hot plate melted it!” He bursts into laughter, but you can sense it wasn’t so funny at the time.

I wonder how he got out, what changed. “Eventually I got jobs: as a waiter, as an assistant in a boutique for women’s clothes, a bartender.” A mathematician by training, he was grateful to work again, and worked hard.

But engineering or logistics remained his goal. “I got myself an email address and applied to the U.N. World Food Programme, but didn’t get the job.” He first worked for the Danish Refugee Council, where he gained good experience. Instead of a promotion, he took a chance on the U.N. World Food Programme’s Standby Emergency Roster, accepting a logistics role in Afghanistan. “At the beginning I thought I would be managing fleet in Kabul, but it ended up being the whole country.”

That’s the kind of Nenad I got to know, nonchalant, where no task is too big and any challenge is to relish. In his three years in Afghanistan, his compound was mortared, making the international headlines, and he survived close-call explosions on the road to the office. Yet he downplays the security risk. “Yes, we prepared three times to be evacuated. But we had an amazing team. We delivered to 99 percent of the people affected by the crisis, and built up the fleet that was needed to help save lives.”

He then worked on the emergency response to the 2005 Pakistan earthquake. “In 48 hours, we got 150 trucks of both food and non-food assistance to people who had lost everything.” He pauses, no doubt remembering his own experience. 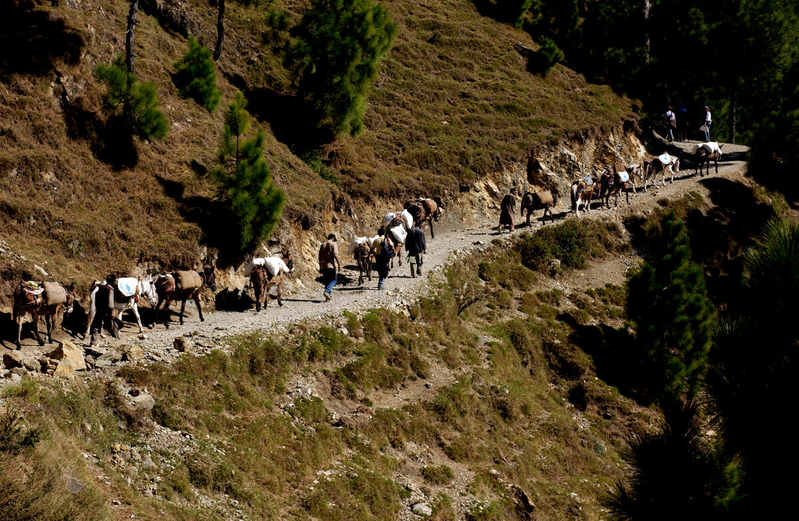 When an earthquake hit Pakistan in 2005, the U.N. World Food Programme teamed up with local NGOs to arrange mule trains to carry food up to the remote villages that had been cut off by the earthquake.

Nenad became known as the man you call when you want to get stuff done, but also when you want to streamline and save — something the U.N. World Food Programme prioritizes in all its projects. “It’s equations behind all our logistics work. If you set your mathematics correctly, you reach your hard target.”

Although he plays up the math, I see he is more than a numbers man. He credits his wife as being the cornerstone of their family; she has been raising their four children while Nenad has been away on postings such as Baghdad. When I say she must be “superwoman,” he quietly agrees. It is tough being apart, but her constant support has enabled him to focus on problem-solving when away, and on growing productive working relationships.

“Everywhere I go: Sudan where I was able to take my family, South Sudan where I wasn’t, Yemen where I scaled up deliveries: I listened, and I made lasting relationships. Listening means: what do your partners need from you, to be able to help you? And how do you work out how to deliver — putting people at the heart of your work, and not compromising them or yourself?” 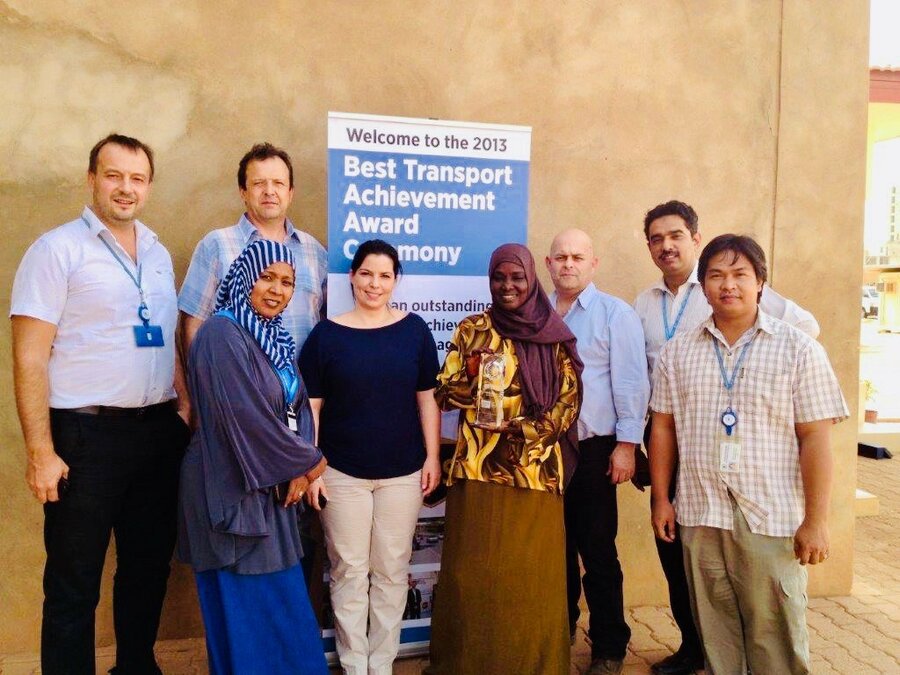 “I remember it was late 2013, and there were 63,934,056 pounds of food in El Obaid which needed to reach Nyala and El Geneina. We closely monitored the situation and learned the forces had moved up north. I asked a trusted colleague to move 2,204,622 pounds as a trial. In a week, we got them all to Nyala.”

“Then immediately after conflict flared, the people were at the border of South Sudan. It was New Year’s Eve, just two of us were alone in the office. There were all these intricate, moving parts, but we got the food there in time.”

That’s it. No matter the numbers — 63,934,056 pounds does sound like a lot to me — what gets me is the people who got food for the New Year. “Our work is never about millions of people. It’s about that one person you want to help.” He may be humble, but his work has impacted millions of lives.

Nenad’s expertise extends to supply chain: in Iraq, he worked on the transition after the Mosul crisis, including from food to cash assistance. The U.N. World Food Programme is the largest implementer of mobile money transfers in Iraq and has spearheaded the development of the sector, planning to deliver 100% of its assistance in the country in cash from the beginning of 2020.

But perhaps fleet is the source of his greatest innovation. It was the recurring need to cross rivers during assignments in Malawi and Nepal that first gave Nenad the idea that evolved into the amphibious all-terrain vehicles — those trucks that look like Micro Machines Big Wheels. 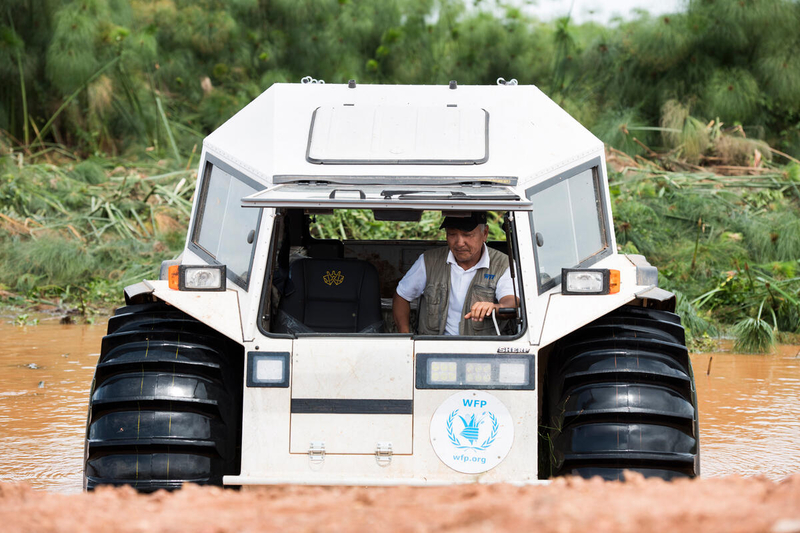 The U.N. World Food Programme’s Global Fleet team introduced a pioneering new vehicle to its Supply Chain – to make sure life-saving food gets to communities in the hardest-to-reach places and most challenging of circumstances.

“This all-terrain vehicle can float, even climb obstacles. Up to three feet high!” He shows me a video on his phone. It’s pretty cool. Nenad trialled it for the first time in South Sudan, and won the third Fleet Forum award for the U.N. World Food Programme this year.

“Naturally air transport is expensive — sometimes there’s no other choice, but think of that environmental impact. The trial saved the U.N. World Food Programme 1.7 million dollars, over five weeks.”

But again, what are those millions? It all comes down to the people, who Nenad holds in his heart, you get the impression ever since those cold days on the floor in Belgrade, eating with a half-melted plastic fork.

“Wherever I went, I did my best for the U.N. World Food Programme and for the people we work for. And whenever we needed to do something different, I fought for whatever was right.”

Again, for the people. His humanitarian heart.

This blog was written by Sharon Rapose and originally appeared on the U.N. World Food Programme site.