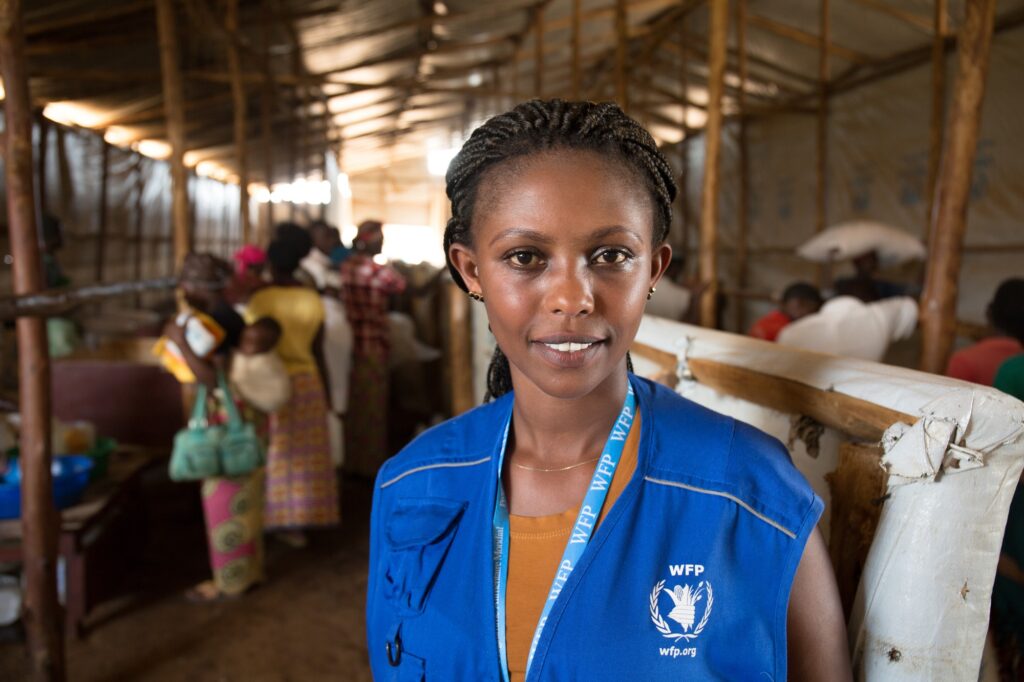 Liberee Kayumba was only 12 years old during the Rwandan genocide.

“I used to have a big family. Many of them died during those months,” she says.

Liberee lives in Kigali — the capital of Rwanda — and works for WFP. During the genocide of 1994, millions of people fled abroad. Today refugees are seeking refuge in Rwanda from the same countries Rwandans escaped to 24 years ago.

Many Rwandans, like Liberee, welcome the refugees with open hearts.

“I can put myself in their shoes because of what I have seen. I have a deeper understanding of what they are going through, surviving in the camps,” she says. “We can provide them with food and ensure that their basic needs are met. But life in the camps is still challenging and different from home.”

Liberee is a monitoring officer in the Mahama camp, which is home to more than 60,000 Burundian refugees. She checks monthly food distributions and talks to the people affected.

“Since I was a child, I wanted to help people in need,” she says. “The memories from the genocide and all those people in need of help motivated me to work for WFP. Like most Rwandans, I got help from WFP and remember the high-energy biscuits that school children still receive today.” Stephen Anderson is the WFP’s Country Director in Yemen, which is facing one of the world’s worst humanitarian crises with more than 18 million people food insecure. Anderson, who was born in Nairobi, Kenya, spent part of his early childhood in Pennsylvania.

He has seen many examples of the United Nations making a difference in people’s lives in places.

“I particularly remember early in my career in the Sudan when I volunteered to join a U.N. relief train that provided assistance to conflict-affected people in southern Sudan. At one point, we came across a sudden influx of southern Sudanese displaced people who had been completely cut off by conflict for a considerable amount of time. Seeing starving adults, with skin and bones similar to footage from concentration camps in World War II, came as a major shock to me personally. Seeing them in this condition made us want to do everything within our power to help these people live. Thankfully, we were in a position to provide them with food and other assistance. If we had not been there, they would likely have died.”

His favorite part of the job is facing challenges as a united team. “I particularly admire observing the professionalism of our WFP logistics colleagues in action, whether they’re running air passenger service and airlifts, dispatching truck convoy, chartering ships, or purchasing food or equipment,” he says. Daniela Villar is a WFP engineer, and she currently works on helping refugees in camps in Bangladesh make it through the monsoon season.

“As the rains have already started, we are working around the clock to improve the safety and accessibility of the camps,” she says. “We are working to ensure we will be able to reach all refugees if and when the refugee sites become inaccessible during the monsoon.”

On being a woman in the male-dominated world of engineering, Daniela reflects. “It is hard, because this sector is still very much a ‘man’s world’ and people assume that, as a woman, you don’t have enough experience.”

She adds, “As a woman, I feel I have empathy with the communities we work with and this makes a huge difference. When I arrive on the ground, my first priority is to listen to the people as well as to the contractors, to understand what they need, what they want and how we can work best together. Just today, I was sitting with the workers in the new logistics hub we are building in the Kutupalong mega camp. They brought me cold water and, through my translator, told me about their families and their children — this creates a connection.” “I have on more than three occasions slept on the road when my truck got stuck in the mud or when the roads were impassable due to poor conditions,” says WFP truck driver Stanley Kondowe. “But I’m always inspired every time I arrive at a school to deliver food for school meals. I’m welcomed by children joyfully shouting ‘Porridge! Porridge! Porridge!’”

Every week for 11 years, Stanley has been delivering food assistance to vulnerable populations in remote and hard-to-reach areas in the southern region of Malawi. He has been stuck many times in the middle of nowhere, relying on the solidarity of his colleagues or local villagers to get his truck out of trouble.

“When I deliver food or nutrition supplements to hospitals, I see a sigh of relief from staff and patients. This motivates me to work hard. I feel useful and proud of helping people in need,” says Stanley. “My wife and children understand the nature of my work so they know that if I come late, after dark, it is because I’m having a hard time in the field. They have learned to live with this fact,” Stanley says.

“I got my truck stuck four times today. It rained yesterday and it is very slippery, but with my colleagues we are helping each other. We know some people are waiting for us and this gives us the strength to continue,” he says. Calvin Apire is from northern Uganda, where he attended secondary school and participated in the ‘School Garden Program’, which was linked to WFP’s school meals program.

As a member of the school’s Young Farmers Association, Calvin learned how to grow corn and beans to support the food needs of his school. WFP supplemented their efforts by providing additional nutritious foods, such as canned fish, chicken and beef, as well as powdered milk, sugar, and rice.

“Receiving nutritious food was a strong incentive for me to stay in school and focus on learning. It was only at school that I could get that standard of food,” says Calvin. “There are many children around the world that fail to pursue effective learning because they either don’t have anything or enough to eat.”

In 2000 as conflict in Uganda intensified, and the need for humanitarian assistance in northern Uganda increased, Calvin joined WFP as a Procurement Assistant.

“There is nothing as exciting as working for the World Food Programme… I get to meet the people we serve and see how happy they are about what we do, which gives me all the satisfaction I need,” he says.