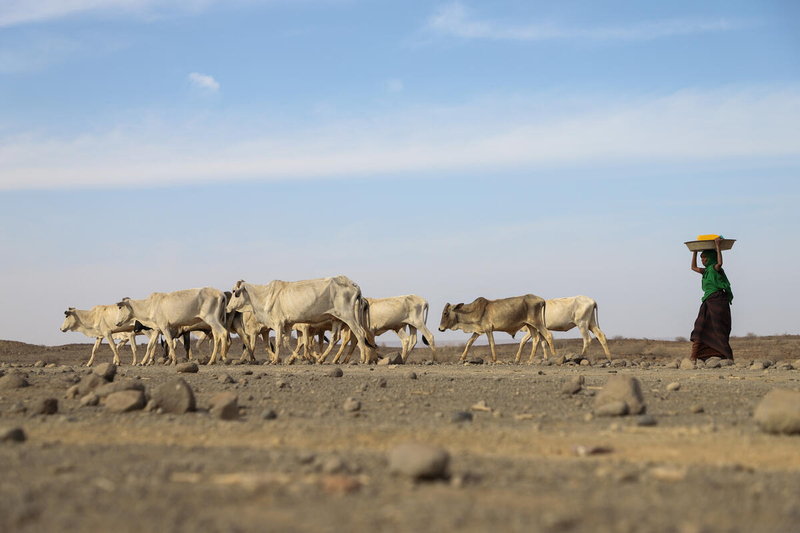 Nairobi – The Horn of Africa is experiencing the driest conditions recorded since 1981, with severe drought leaving an estimated 13 million people across Ethiopia, Kenya and Somalia facing severe hunger in the first quarter of this year, the United Nations World Food Programme (WFP) warned today.

Three consecutive failed rainy seasons have decimated crops and caused abnormally high livestock deaths. Shortages of water and pasture are forcing families from their homes and leading to increased conflict between communities. Further forecasts of below-average rainfall are threatening to worsen and compound dire conditions in the coming months.

“Harvests are ruined, livestock are dying and hunger is growing as recurrent droughts affect the Horn of Africa,” said Michael Dunford, regional director in the U.N. World Food Programme Regional Bureau for Eastern Africa. “The situation requires immediate humanitarian action and consistent support to build the resilience of communities for the future.”

The drought has impacted pastoral and farmer populations across southern and south-eastern Ethiopia, south-eastern and northern Kenya and south-central Somalia. The impacts are compounded by increases in staple food prices, inflation and low demand for agricultural labour, further worsening families’ ability to buy food. Malnutrition rates also remain high across the region and could worsen if no immediate action is taken.

As needs across the Horn of Africa grow, immediate assistance is critical to avoid a major humanitarian crisis, like the one the world witnessed in 2011 when 250,000 people died of hunger in Somalia. This week the U.N. World Food Programme launches its Regional Drought Response Plan for the Horn of Africa, calling for $327 million to respond to immediate needs of 4.5 million people over the next six months and help communities become more resilient to extreme climate shocks.

“With the drought, the livestock we have are in danger. Our livelihood depends on them, so we are doing everything we can to keep them healthy. Every morning we lead our cattle to graze at a pasture far away, but even that area is drying up,” said Elamu, a mother of seven in Ethiopia who is impacted by drought.

In Ethiopia, an estimated 5.7 million people affected by severe drought need food assistance. The U.N. World Food Programme aims to support 2.9 million people with food relief in the Somali Region, 585,000 malnourished children and mothers with nutrition treatment, and 80,000 households with mothers or young children with preventative treatment against malnutrition. This emergency response will be complemented by expanding microinsurance support for up to 18,000 at-risk pastoralists. The U.N. World Food Programme is also seeking to add 50,000 children to its school meals program, which currently reaches 87,000 children across 254 schools in other drought affected regions of Oromia and SNNP.

In Kenya, the government declared the drought a national emergency in September 2021 and an estimated 2.8 million people are in need of assistance. The U.N. World Food Programme aims to provide urgent food assistance to more than 890,000 people in the worst affected counties as well as scale up malnutrition treatment and prevention programs for women and children. The U.N. World Food Programme will also extend microinsurance support for small-scale farmers.

In Somalia, the number of acutely food insecure people (IPC 3+) is expected to increase from 3.5 to 4.6 million between February-May 2022 if humanitarian assistance is not received. The U.N. World Food Programme is aiming to scale up its food assistance to support an additional 600,000 people in the first half of this year, reaching a total of almost 2.5 million. To help prevent and treat the implications of drought, the U.N. World Food Programme will also provide nutrition support to women and children. The U.N. World Food Programme is also continuing livelihoods, resilience and food systems programs to protect recent development gains and strengthen vulnerable Somalis against droughts and other crises in the long term.