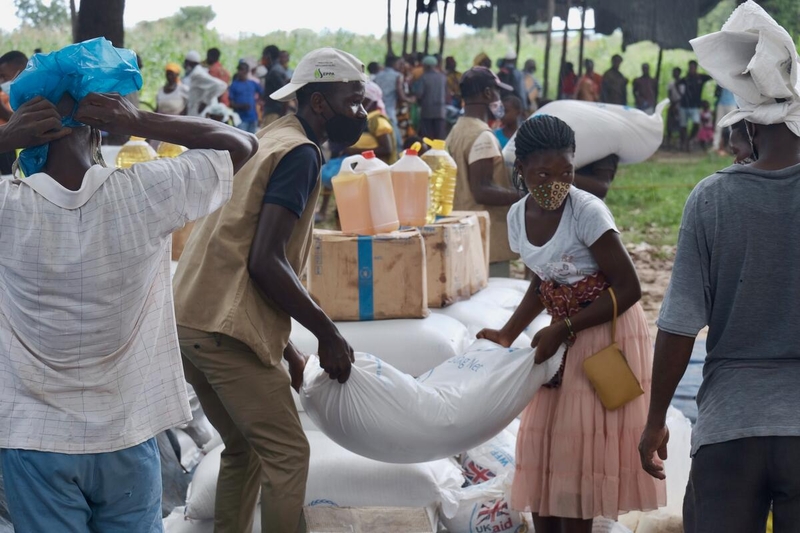 PEMBA, CABO DELGADO – Mozambique’s Cabo Delgado province is in the grips of a spiraling crisis as thousands of people flee their homes amidst violence, warns the United Nations World Food Programme (WFP).

“People have scattered in many different directions since the recent attacks in Palma, Cabo Delgado Province. Survivors are traumatized. They’ve had to flee leaving behind all their belongings and families have been separated,” said Antonella Daprile, U.N. World Food Programme Country Director in Mozambique. “We met a young mother who fled the violence with her two daughters. They walked for three days without food or water and have no idea whether the rest of their family survived.”

Recent attacks in Palma have affected 50,000 people. Many have fled Palma to Pemba on boats making their perilous journey over choppy waters. Thousands are still trapped in Palma and Quitunda, and the U.N. World Food Programme is working round the clock to secure access to those most in need. The U.N. World Food Programme has also been using boats from Pemba to reach those in remote areas, on surrounding coastal islands.

Over the last week, there has been more rain in the region. Women and children huddle under flimsy tarpaulin sheets, sheltering from the wind and rain. This part of the country is no stranger to extreme weather hazards and the cyclone season still poses a threat to communities.

Hunger persists and children are worst affected, with malnutrition worryingly on the rise. A recent survey by UNICEF and the U.N. World Food Programme found that almost 21 percent of displaced children under 5, and 18 percent of host children are underweight. At the same time, the rates of chronic malnutrition (or ‘stunting’), which has lifelong consequences, are at an alarming 50 percent among displaced children and 41 percent among children from host communities.

Conflict continues to drive hunger in northern Mozambique as more than 950,000 people now face severe hunger. The U.N. World Food Programme is in the process of scaling-up its response in northern Mozambique, with plans to assist 750,000 internally displaced people and vulnerable members of the local community across the provinces of Cabo Delgado, Nampula, Niassa and Zambezia.

The U.N. World Food Programme urgently requires $82 million to respond to the crisis in northern Mozambique and support the vulnerable, largely women and children.