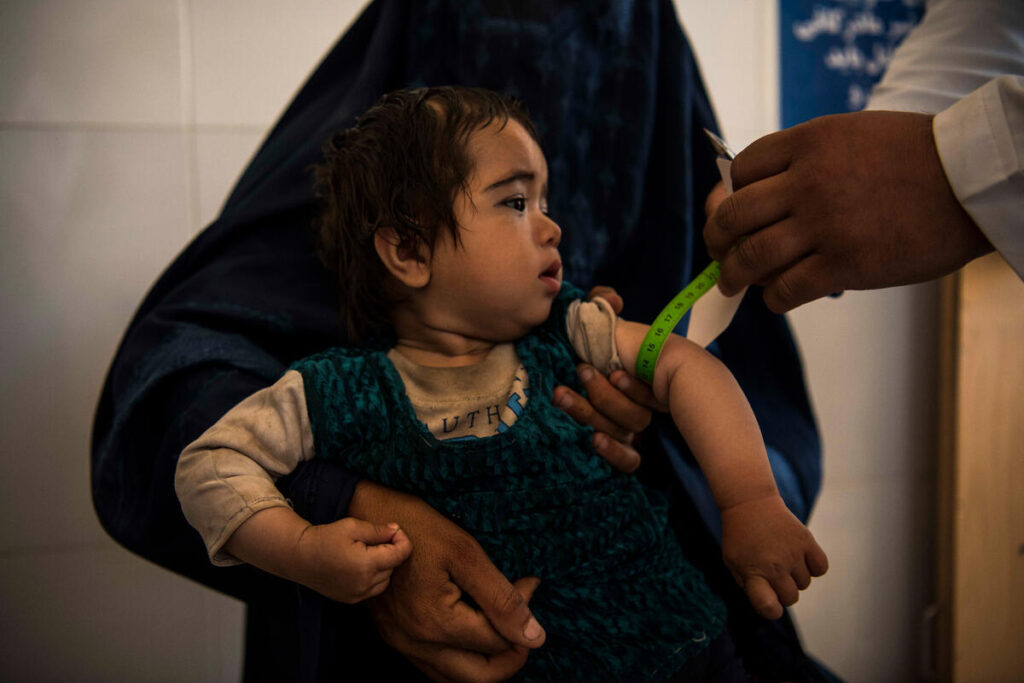 Kabul – Wrapping up a two-day visit to Herat, UNICEF Representative in Afghanistan, Hervé Ludovic De Lys, and United Nations World Food Programme (WFP) Afghanistan Representative and Country Director, Mary-Ellen McGroarty, sounded the alarm on the dire state of malnutrition and food insecurity sweeping across the country. Without reliable access to water, food and basic health and nutrition services, Afghan children and their families are bearing the brunt of years of conflict and the current economic crisis.

14 million people in Afghanistan are facing acute food insecurity, and an estimated 3.2 million children under the age of 5 expected to suffer from acute malnutrition by the end of the year. At least 1 million of these children are at risk of dying due to severe acute malnutrition without immediate treatment.

De Lys and McGroarty spoke with Jahan Bibi, whose 18-month-old daughter is being treated for severe acute malnutrition at the Herat Regional hospital. She brought her daughter to the hospital as she could no longer breastfeed her baby. “We have no food at home. We are selling everything to buy food, yet I barely eat anything. I am weak and I don’t have any milk for my child.”

With winter fast approaching, it is now a race against time to assist Afghan families also lacking access to safe water and health and nutrition services.

“As more families struggle to put food on the table, the nutritional health of mothers and their children is getting worse by the day,” said Hervé Ludovic De Lys, UNICEF Representative in Afghanistan. “Children are getting sicker and their families are less and less able to get them the treatment they need. Rapidly spreading outbreaks of measles and acute watery diarrhoea will only exacerbate the situation.”

According to U.N. World Food Programme surveys 95 percent of households in Afghanistan are not consuming enough food, adults are eating less and skipping meals so their children can eat more.

“We have huge concerns about the desperate choices families are being forced to take,” said Mary-Ellen McGroarty, the U.N. World Food Programme Afghanistan’s Representative and Country Director. “Unless we intervene now, malnutrition will only become more severe. The international community must release the funds they pledged weeks ago, or the impact could be irreversible.”

McGroarty and De Lys also visited a food distribution center in Herat city where they met with families struggling to make ends meet amidst drought and lack of jobs. They also visited a settlement for internally displaced families where mobile health and nutrition teams are providing lifesaving services to women and children, supported by UNICEF and WFP.

The two UN agencies are adding 100 more mobile health and nutrition teams. Already 168 mobile teams are providing a lifeline for children and mothers in hard-to-reach areas.

Since the beginning of 2021, the U.N. World Food Programme has provided lifesaving food and nutrition assistance to 8.7 million people, including treatment and prevention of malnutrition for nearly 400,000 pregnant and breastfeeding women and 790,000 children under 5. Close to 4 million people were reached in September alone. Additionally, this year, more than 210,000 children with severe acute malnutrition were provided with lifesaving treatment through UNICEF-supported services. Ready-to-use therapeutic food for more than 42,000 children and therapeutic milk for 5,200 children was also delivered to UNICEF partners in the past eight weeks.