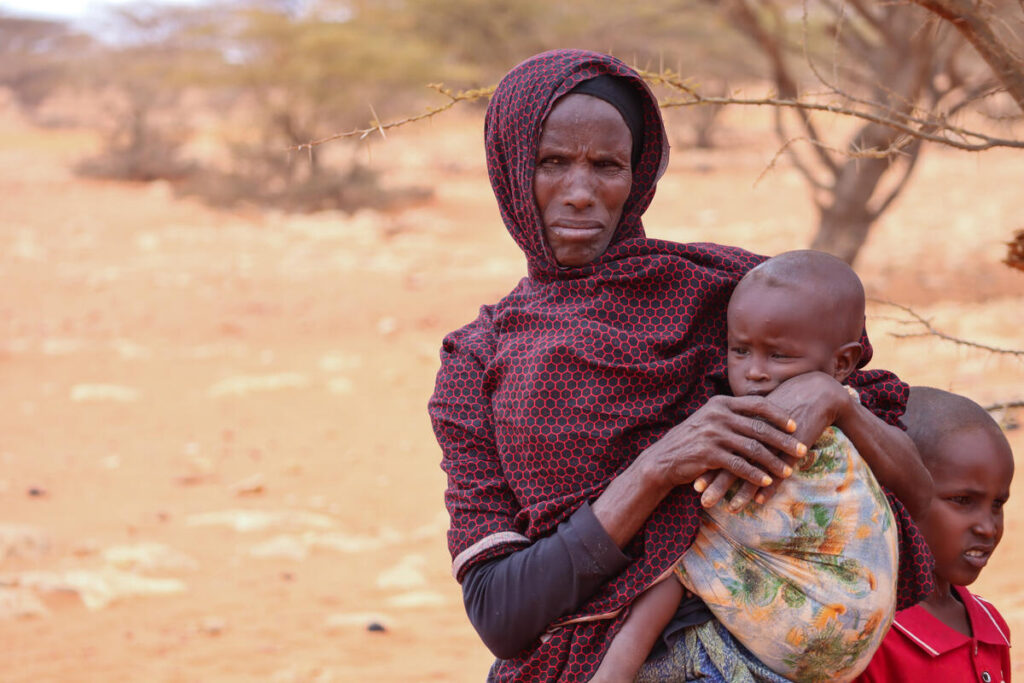 NAIROBI – The United Nations World Food Programme (WFP) is expanding assistance in the Horn of Africa as levels of hunger soar after back-to-back droughts and the threat of famine looms. Since the start of the year, 9 million more people have slipped into severe hunger across Ethiopia, Kenya and Somalia – leaving 22 million people struggling to find enough food to eat.

U.N. World Food Programme Executive Director David Beasley on Thursday wrapped up a visit to drought-ravaged Somalia, where over 7 million people (close to half the population) are severely hungry and 213,000 are already facing famine-like conditions. Beasley visited the southern city of Baardheere and met families, including malnourished children and their mothers, who have been forced to leave their homes and travel long distances through conflict-wracked areas in search of humanitarian assistance.

“People here have been waiting years for rain – but they cannot wait any longer for lifesaving food assistance. The world needs to act now to protect the most vulnerable communities from the threat of widespread famine in the Horn of Africa,” said Beasley. “There is still no end in sight to this drought crisis, so we must get the resources needed to save lives and stop people plunging into catastrophic levels of hunger and starvation.”

The U.N. World Food Programme is tripling the number of people reached with lifesaving food assistance in the Baardheere area, which hosts tens of thousands of people driven from their homes by drought and conflict.

Across the Horn of Africa, the drought is expected to continue in coming months with a fifth poor rainy season forecast later this year. The U.N. World Food Programme has focused available funds, including critical emergency funding from USAID’s Bureau for Humanitarian Assistance, on scaling up lifesaving assistance in areas worst hit by the drought. The U.N. World Food Programme is targeting 8.5 million people across the Horn of Africa, up from 6.3 million at the start of the year.

Across the three drought-affected countries, the U.N. World Food Programme is providing food and cash assistance to families and distributing fortified foods to women and young children to treat spiraling rates of malnutrition and prevent more people among some of the most vulnerable communities slipping closer towards famine. U.N. World Food Programme cash grants and insurance schemes are also helping families to buy food to keep livestock alive or to compensate them when their animals die.

At the start of the year, the U.N. World Food Programme warned that 13 million people in the Horn of Africa were facing severe hunger due to the drought. By mid-year, with the fourth consecutive failure of rains, that number increased to 20 million. Now, the number is projected to rise again to at least 22 million by September. This number will continue to climb, and the severity of hunger will deepen if the next rainy season (October to December) fails and the most people do not receive humanitarian relief. Needs will remain high into 2023 and famine is now a serious risk, particularly in Somalia.

Across the Horn of Africa, livestock are dying and there are acute shortages of water and food. So far 1.1 million people have been forced from their homes by the drought, ending up in crowded camps where the humanitarian community is struggling to keep pace with the demand for food, shelter, and healthcare.

During the 2016/17 drought in the Horn of Africa, catastrophe was avoided through early action. Humanitarian assistance was scaled up before there was widespread hunger, saving lives and averting a devastating famine. The U.N. World Food Programme is doing everything possible to support those most in need, but with no end in sight to this drought, some $418 million is urgently needed over the next six months to meet these increasing needs.

In Kenya, the U.N. World Food Programme is rapidly scaling up to reach 535,000 drought-affected people by the end of August – up from 108,000 reached in the first half of 2022. The U.N. World Food Programme is also expanding its malnutrition treatment programs to reach 210,000 malnourished children and 105,000 pregnant and breastfeeding women in 15 drought-affected counties – up from 8 counties.