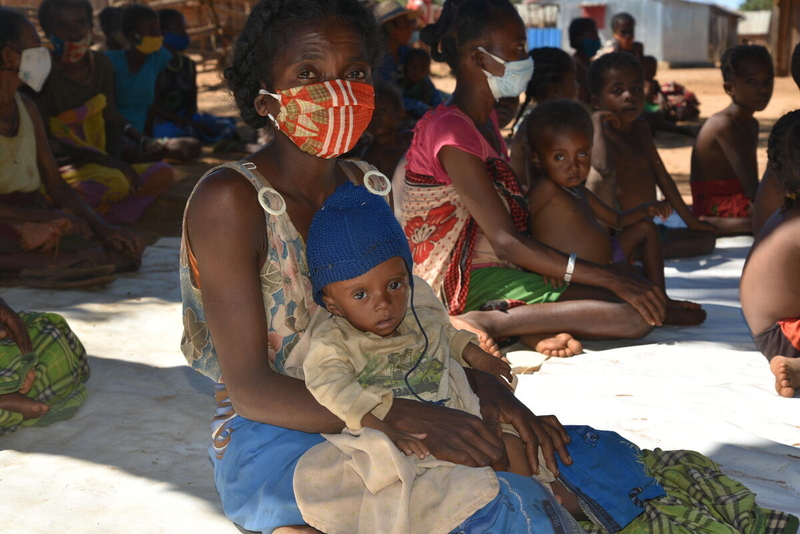 ANTANANARIVO, MADAGASCAR: With each day that passes, more lives are at stake as hunger tightens its grip in southern Madagascar. This is the stark warning from two United Nations agencies, the Food and Agriculture Organization (FAO) and the United Nations World Food Programme (WFP), as they seek to draw international attention to a humanitarian crisis that risks being invisible.

Around 1.14 million people in the south of Madagascar are facing high levels of acute food insecurity, of which nearly 14,000 people are in ‘Catastrophe’ (Phase 5 – the highest in the five-step scale of the Integrated Food Security Phase Classification (IPC).

This is the first time that people have been recorded in Phase 5 in Madagascar since the IPC methodology was introduced in 2016. Unless urgent action is taken now, the number of people in the ‘Catastrophe’ category is expected to double over the next lean season starting in October 2021.

Drought, sandstorms, plant and animal pests and diseases, and the impact of COVID-19 have caused up to three-quarters of the population in the worst affected Amboasary Atsimo district to face dire consequences, and global acute malnutrition rates have crossed an alarming 27 percent causing irreversible damage to children.

“The issue is no longer about how bad it is – it is extremely bad. Children are starving, children are dying. I met a mother with an 8-month-old child who looked like he was only 2 months old. She had already lost her older child,” said U.N. World Food Programme Senior Director of Operations Amer Daoudi who recently visited one of the worst-affected areas, Sihanamaro. “We are already witnessing whole villages shutting down and moving to urban centres. This puts additional pressure on an already fragile situation.”

The worst drought in four decades, which has been building over three consecutive years, has wiped out harvests and hampered people’s access to food. This comes on top of years of deforestation and resulting erosion — now compounded by climate change — which have devastated the environment and unprecedented sandstorms have transformed large swathes of arable land into wasteland.

The 2019/20 agricultural season saw a dramatic decrease in food production. This was then aggravated by another year of poor rainfall in 2020/2021 which was the fifth year of below average rains in the island’s semi-arid South.

The 2021 harvest of crops like rice, maize, cassava and grains is expected to be less than half the five-year average, laying the ground for a prolonged and severe lean season, starting in October 2021.

“A counter-intuitive fact is that 95 percent of people facing acute food insecurity in southern Madagascar live on agriculture, livestock and fishing. Years of poor harvests driven by drought upon drought, and weather-related damages to fishing, have pushed people to the brink. We must take urgent action to keep livestock alive and provide seeds, irrigation, tools and fishing gear to rapidly boost local food production and availability — but cannot neglect the need to build more climate-resilient agricultural livelihoods for the longer term,” said FAO’s Director of Emergencies and Resilience, Dominique Burgeon.

Given the significant loss of livelihoods and reduced access to food for vulnerable households, providing farming communities with seeds, tools and other essential inputs is vital to kickstart local food production, generate income and build resilience. This support to farming and rural livelihoods complements emergency food and prevents families from selling their productive assets such as farming equipment and even cooking utensils just to survive.

Resources urgently needed to save lives

Humanitarian food stocks in Madagascar are running low. The U.N. World Food Programme is bringing supplies in but access to the worst affected areas is being hampered by poor infrastructure and weak road networks. COVID-19 restrictions have halted all flights into the island nation meaning critical humanitarian cargo is limited to access by boat and lead times for turning donations into humanitarian aid has increased sharply.

Since October 2020, the Government and the U.N. World Food Programme have been progressively assisting around 750,000 people through general food distributions combined with distribution of supplementary food for the prevention of moderate acute malnutrition in children under five as well as pregnant and nursing women. But the food insecurity crisis has been growing fast and this current support is not enough to offset the impact and the risk of famine. The U.N. World Food Programme urgently needs $74 million over the next six months to avert disaster in southern Madagascar.

The Government and FAO have meanwhile supported the livelihoods of around 20,000 farming families (around 160,000 people) with fast-growing vegetable seed packs as well as training in drought-resilient farming strategies and post-harvest loss reduction. At the same time, FAO has distributed feed and health kits to keep poultry, goats and sheep alive. Even a small increase in household food production can make a major difference for at-risk families, and such support must be significantly scaled up.

FAO urgently needs $40 million to reach an additional 225,000 farming households with life-saving support through the coming lean season until the end of the year.

The FAO-U.N. World Food Programme warning issued today comes amid rising international concern over surging levels of acute food insecurity, with the recent Global Report on Food Crises adding to the sense of urgency. Responding to UN Secretary-General António Guterres’ call for international solidarity to #FightFamine this year, FAO and the U.N. World Food Programme have called for $ 5.5 billion in urgent funding for humanitarian food aid and livelihoods support.