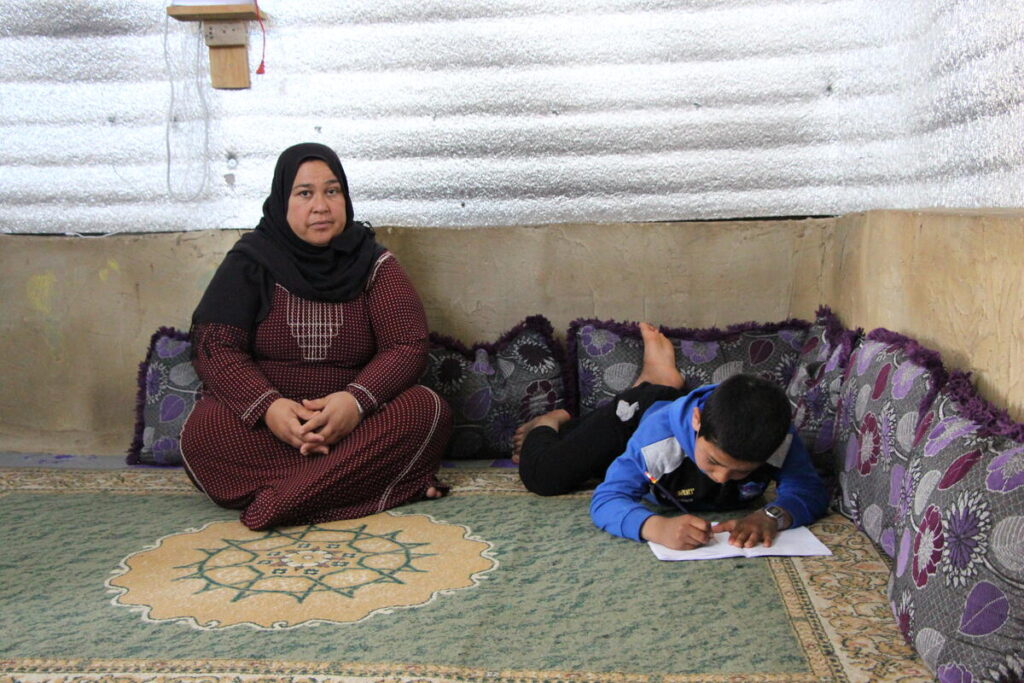 The economic downturn, steep inflation, COVID-19 and finally the Beirut blast have pushed vulnerable communities in Lebanon – including Syrian refugees – to the brink, with thousands of families sinking further into poverty and vulnerability.

One of the most concerning indicators of the impact of the compounded crises Syrian refugees have been facing in Lebanon is the sharp increase in the proportion of households living under the extreme poverty line, reaching a staggering 89 per cent in 2020, up from 55 per cent only a year before. They now live on around $200 per person per month – this is less than half the minimum wage in Lebanon.The economic downturn, steep inflation, COVID-19 and finally the Beirut blast have pushed vulnerable communities in Lebanon – including Syrian refugees – to the brink, with thousands of families sinking further into poverty and vulnerability.

Mireille Girard, UNHCR Representative in Lebanon, said: “The consecutive crises have affected all communities in Lebanon – Lebanese, refugees, migrants, and others – and the most vulnerable are the hardest hit. The situation of Syrian refugees in Lebanon has been deteriorating for years, but the findings of this year’s survey are a dramatic indication of how difficult it has become for them to make it through another day.” She added: “The key findings are released at a time when Syrian refugees are facing their hardest winter yet in Lebanon, braving the weather elements with very little to stay warm and safe.”

Refugees Are Accumulating More Debt Than Ever Before

The findings of the survey have indicated that the average amount of debt accumulated by households has increased by 18 per cent with an average debt of more than $1200 per family. The main reason for incurring debt was buying food (93 per cent), followed by rent and medicine at 48 per cent and 34 per cent respectively. Similar to the previous year, 9 out 10 households continue to be in debt, indicating that Syrian refugee households continue to lack enough resources to cover their basic needs.

Half of the Syrian Refugee Population Is Now Food Insecure

Food prices have almost tripled in Lebanon since October 2019 increasing by about 174 per cent. At the same time, income opportunities have drastically shrunk due to the sharp economic slowdown the country has seen over the past twelve months.

Half of Syrian refugee families surveyed were found to be suffering from food insecurity, compared to 28 per cent at the same time in 2019.

Households with inadequate diets have doubled compared to the previous year (25 per cent in 2019 to 49 per cent in 2020), while the number of those resorting to damaging food coping mechanisms such as reducing the number of meals per day or reducing food portions is also on the rise.

“Refugees are the most vulnerable people in any society and they are no different in Lebanon where the entire population is suffering from multiple crises that are even affecting the country’s middle class,” says Abdallah Al Wardat, U.N. World Food Programme Representative and Country Director in Lebanon. “Thanks to generous support from donors, the U.N. World Food Programme continues to provide assistance to more than 800,000 refugees every month.”

Limited Access to Remote Learning, Child Labor on the Rise

Due to COVID-19 pandemic, public schools in Lebanon were all closed starting March 2020, and remote learning was introduced across the country. Sixty-five per cent of school-aged children (ages 6-17) enrolled in schools were reported to only have attended school in person, before the closure in March 2020. The remaining 35 per cent had some access to remote/distance learning, of whom one third were not able to follow such lessons, mostly due to lack of or insufficient internet.

“The situation of children is becoming more and more delicate following the unprecedented crises Lebanon faced this year,” said Yukie Mokuo, UNICEF Representative in Lebanon. “We need to ensure that the most vulnerable children and young people are kept healthy, safe, and learning. They should be kept away from negative coping mechanisms such as child labour.”

Similar to 2019, close to 70 per cent of Syrian refugees continue to lack legal residency. This affects all aspects of refugees’ lives, not only in terms of restricting movement due to increased risk of arrest and detention, but also in posing additional challenges in securing housing and accessing livelihoods.

While improvements in birth registration were noted in 2019, this did not carry over to 2020. In 2020, only 28 per cent of births that had occurred in Lebanon were registered with the Foreigners’ Registry, compared to 30 per cent in 2019 and 21 per cent in 2018. However, almost all births (98 per cent) have the minimum documentation (doctor or midwife certificate).

Tensions Between Host and Refugee Communities Have Decreased

Similar to previous years, competition for jobs was cited by a number of families (40 per cent) as one of the main drivers for tensions between refugee and host communities, however, this is a stark decrease from 2019 (51 per cent). Families citing competition for resources also decreased from 20 per cent in 2019, to only 8 per cent in 2020.

The Vulnerability Assessment of Syrian Refugees in Lebanon (VASyR) was conducted jointly by UNHCR, the U.N. World Food Programme, and UNICEF. VASyR 2020 is the eighth version of the annual survey.

The situation in Lebanon has affected all populations living in the country – Lebanese, refugees, migrants and others – with the most vulnerable communities being hit the hardest. While VASyR specifically looks at the Syrian refugee population, UNHCR, the U.N. World Food Programme and UNICEF are all working closely with the Lebanese authorities and other organizations, including the World Bank, to analyze the impact of the situation on vulnerable Lebanese, and to provide appropriate assistance.

The survey is the cornerstone of the Lebanon Crisis Response plan (LCRP) and programming for many (I)NGOs, UN and development actors.

UNHCR, the UN Refugee Agency, is a global organization dedicated to saving lives, protecting rights and building a better future for refugees, forcibly displaced communities and stateless people. UNHCR works closely with the Government of Lebanon and numerous other national and international partners in providing protection and assistance to refugees and stateless persons, as well as Lebanese communities.

The U.N. World Food Programme is the 2020 Nobel Peace Prize Laureate and the world’s largest humanitarian organization, saving lives in emergencies and using food assistance to build a pathway to peace, stability and prosperity for people recovering from conflict, disasters and the impact of climate change. In Lebanon, the U.N. World Food Programme in close collaboration with its partners is the largest provider of direct food and non-food assistance to refugees and vulnerable Lebanese communities.

UNICEF works in the world’s toughest places, to reach the world’s most disadvantaged children. Across more than 190 countries and territories, we work for every child, everywhere, to build a better world for everyone.