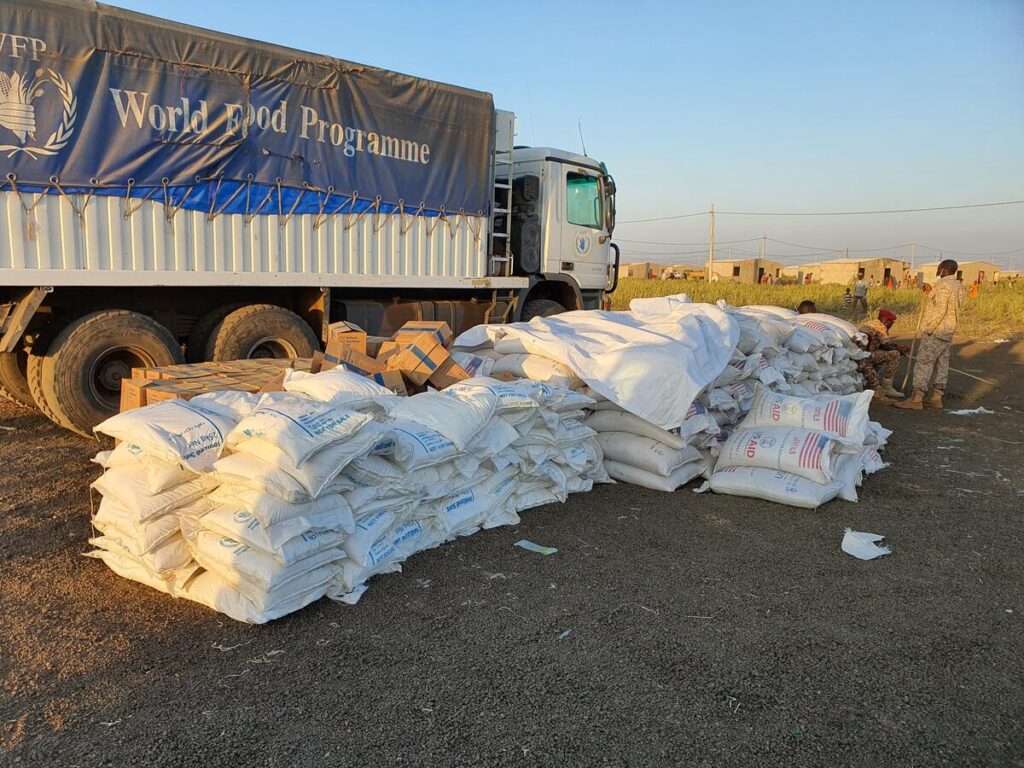 ADDIS ABABA – Eritrean refugees in two camps in the Tigray Region of Ethiopia received a month’s worth of food supplies through a joint distribution by the United Nations World Food Programme (WFP), the United Nations Refugee Agency (UNHCR) and Ethiopia’s Agency for Refugees and Returnee Affairs (ARRA).

In coordination with Federal authorities, a convoy of 18 trucks delivered nearly 250 metric tons of corn soy blend, grains, beans and vegetable oil to local humanitarian partners for distribution to 13,000 Eritrean refugees in Mai Ayni camp. Another nearly 240 metric tons of food were delivered to Adi Harush refugee camp to support 12,170 refugees there. The U.N. World Food Programme, UNHCR and ARRA provided monitoring support during both distributions.

“I am pleased we were able to replenish food supplies for refugees who last received two months’ worth of food in mid-October,” said Steven Were Omamo, U.N. World Food Programme Representative and Country Director in Ethiopia. “Refugees in these camps depend on U.N. World Food Programme food assistance for survival, and maintaining a consistent supply is a lifeline.”

Distributions began shortly after the food reached the camps, organized by ARRA, with support from the U.N. World Food Programme and UNHCR.  They were completed on December, 23 2020.

“Families, women, men, children — even newborns — have been cut off from supplies and essential services for many weeks, so this distribution was urgently needed,” said Ann Encontre, UNHCR’s Representative in Ethiopia.

“Thanks to the smooth partnership with ARRA and the U.N. World Food Programme, we were able to provide this aid. We now need to ensure that the same can be done for the remaining camps, as well as re-establish critical protection services and ensure basic needs like shelter, access to medical care and schools as quickly as possible. Every day, every hour counts,” she said.

“I am confident that UNHCR will be able to resume its full mandate in the camps very soon,” she added.

UNHCR, the U.N. Refugee Agency, protects people forced to flee their homes because of conflict and persecution. We work in over 130 countries, protecting millions of people by responding with life-saving support, safeguarding fundamental human rights and helping them build a better future.

The U.N. World Food Programme is the 2020 Nobel Peace Prize Laureate. We are the world’s largest humanitarian organization, saving lives in emergencies and using food assistance to build a pathway to peace, stability and prosperity for people recovering from conflict, disasters and the impact of climate change.