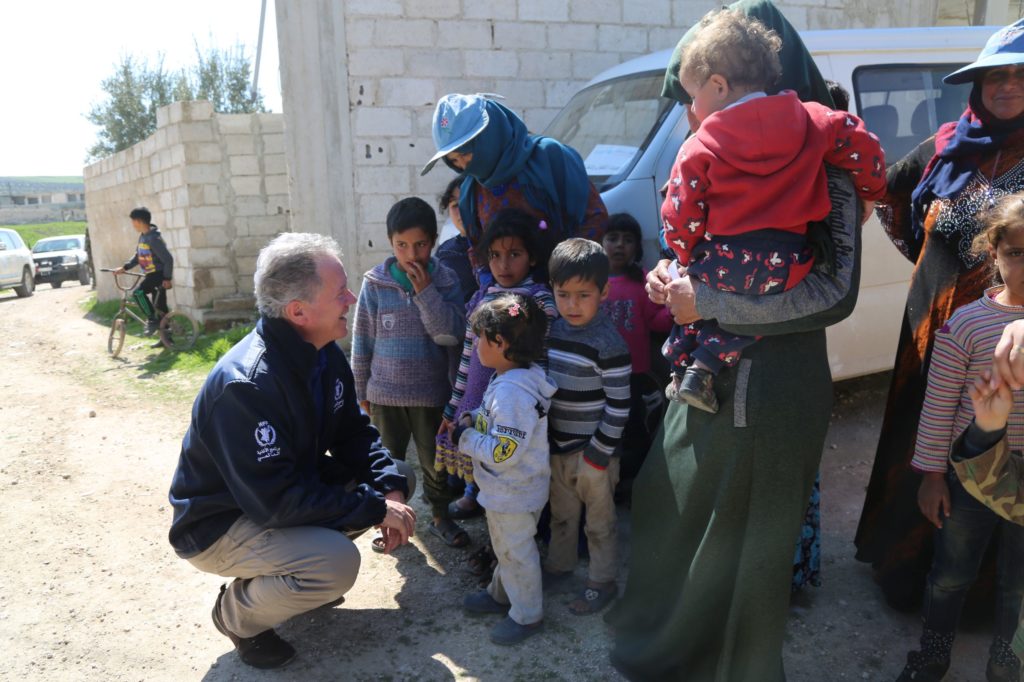 DAMASCUS/CAIRO/AMMAN/NEW YORK/ROME – It is now more urgent than ever to end the violence in Syria and to improve access across the country, UNICEF Executive Director Henrietta Fore and World Food Programme Executive Director David Beasley said today. Wrapping up a two-day visit to the country, the two agency chiefs also stressed the need to provide families with basic services and to improve their economic conditions.

Their trip comes amid a dangerous escalation in Northwest Syria and as the conflict is about to enter its 10th year, leaving one third of the Syrian people food insecure, 1 in 3 children out of school, and over half of all health facilities non-functional.

“Children across Syria are enduring the impact of a merciless war and will continue to suffer long after the guns have gone silent,” said Henrietta Fore, UNICEF Executive Director. “Over the past 9 years, schools and hospitals have been bombed, families have been torn apart and young lives have been lost. Even in areas far away from the front lines, families are struggling to feed their children and rebuild their lives. For those responsible for this collective failure on Syria: History will judge you harshly.”

Nine years of war have left Syria’s economy in near collapse, pushing millions of people into hunger and food insecurity. Between 2018 and 2019, the number of food insecure people increased from 6.5 million to 7.9 million, and food prices spiked by 60 percent.

“The millions of people whose lives have been shattered by war can no longer afford to put food on the table as the Syrian economy has taken a nosedive in recent months,” said David Beasley, Executive Director of the World Food Programme. “WFP is providing food assistance to over 7.5 million people inside Syria and in the neighboring countries who would otherwise be on their own. The war has left Syria a broken country and above all the people desperately need peace.”

During their trip, Fore and Beasley visited a school, a food distribution center and a health clinic in Sinjar, southern Idlib, 18 miles away from the front line. They met nine-year old schoolchildren who were born the year the war started and are catching up on their learning after years of missing out. They also visited a woman who lost her small business when the war forced her to leave her home and is now dependent on WFP assistance to feed her three young siblings who live with disabilities.

Further up north in Idlib, the situation of children and families has become even more critical: More than half a million children have been displaced in the past three months, an average of 6,000 a day. Some 180 schools are out of operation because they were either destroyed, damaged or used as shelter for displaced families. Food prices have increased by 120 percent since last year.

Meanwhile, in the northeast, tens of thousands of children continue to languish in displacement camps, deprived of the most basic services, despite the significant efforts of humanitarian partners. Some 28,000 children from more than 60 countries, including 20,000 from Iraq, remain stranded in Al Hol camp, rejected by their governments and shunned by their communities.

In their meetings with government officials, Fore and Beasley renewed their agencies’ commitment to helping Syria’s most vulnerable children and families and providing them with education, nutrition, health, protection services and food.

They stressed that being able to move staff and supplies across conflict lines and across borders is critical for reaching the populations most in need, particularly as 11 million people in the country – 5 million of them children – require humanitarian assistance.

The two officials also called for the protection of children, civilian infrastructure, and for a cessation of hostilities in the northwest.

Fore further spoke of the need to address the plight of foreign children in the northeast, in line with the Convention on the Rights of the Child and children’s best interests.

UNICEF and WFP are working jointly in Syria to help prevent and treat malnutrition, strengthen data collection, and provide school feeding to keep children in school.