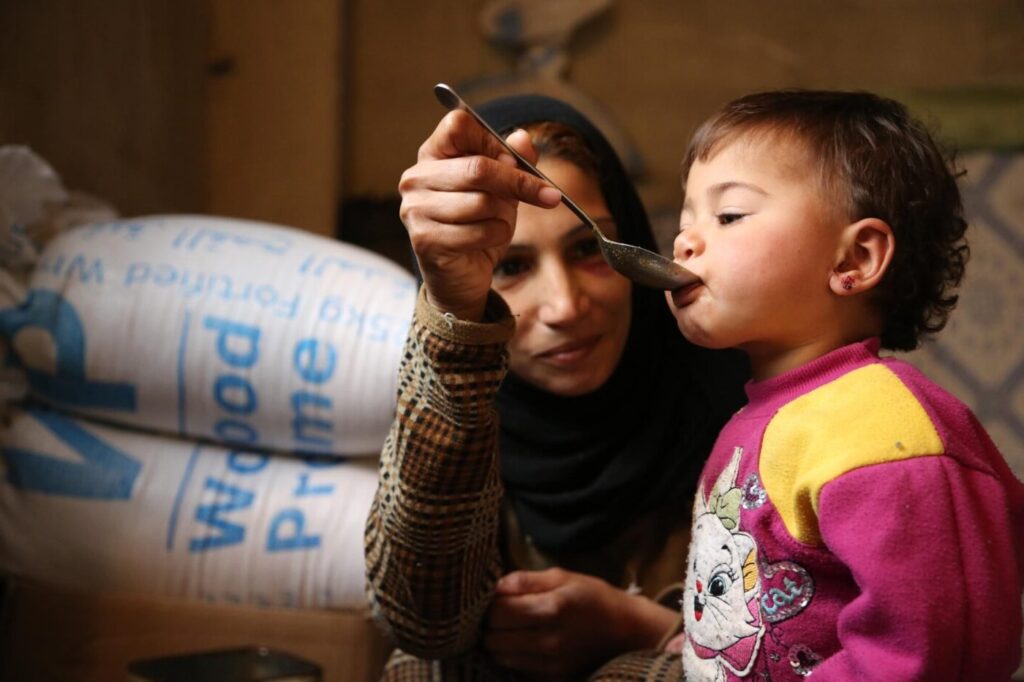 Ten Years on, War-Ravaged Syrians Grapple With Their Worst Hunger Crisis Yet

DAMASCUS – After a decade of upheaval, conflict and displacement, Syrians are facing the worst humanitarian conditions since the start of the crisis, with millions of people sliding into hunger in the last year alone, according to the United Nations World Food Programme (WFP).

“This conflict has taken a tremendous toll on the Syrian people. Every day more and more Syrians are pushed deep into hunger and poverty,” said Sean O’Brien, U.N. World Food Programme Representative and Country Director in Syria.

“Families are faced with impossible choices: do they put food on the table, or get the healthcare they need? Or can they send their children to school? Without sustained assistance, these families simply cannot survive.”

Syrians are facing multiple shocks, including the collapse of the Syrian pound, its impact on the price of basic commodities, the fallout from the financial crisis in Lebanon, as well as the ongoing hostilities and large-scale displacement. The COVID-19 pandemic has further exacerbated the food security situation.

Some 4.5 million people have sunk into hunger and food insecurity in the last year alone.

A recent assessment by the U.N. World Food Programme and partners estimates that a record 12.4 million Syrians – nearly 60 percent of the population – suffer from food insecurity and hunger today, double the number in 2018. The study also revealed that the number of people who cannot survive without food assistance has doubled in a year, reaching 1.3 million people.

Food prices have increased by more than 200% just in the last year. Families report that, even during the worst years of conflict, life was never as hard as it is now. Parents say they have not eaten meat and fruit for months as prices of staple foods have soared beyond reach.

The U.N. World Food Programme has provided monthly food assistance for nearly 5 million people inside Syria over the past 10 years, using every means available to reach people in need. The U.N. World Food Programme is also providing assistance for more than 1.5 million Syrian refugees in neighboring Turkey, Lebanon, Jordan, Iraq and Egypt. These five countries host more than 5.6 million Syrians, the biggest refugee group in the world.

The COVID-19 pandemic and the consequent economic downturn have pushed hundreds of thousands of Syrian refugees in the region deeper into poverty. Meanwhile, in the five countries hosting refugees, the U.N. World Food Programme is facing funding shortfalls and could soon be forced to choose between providing reduced rations or prioritizing the most vulnerable only.

“After 10 years, there’s a lot of fatigue, both in countries hosting refugees and in donor countries who are being stretched by the COVID-19 pandemic and its effects on their economies. But the Syrian people cannot take it any longer. We must not forget them. If we do, it will mean losing lives,” said the U.N. World Food Programme’s Regional Director for the Middle East and North Africa Corinne Fleischer.

Across the region, progress made over the last 10 years to improve food security are already being reversed. In Lebanon – where the U.N. World Food Programme is assisting nearly 900,000 Syrian refugees – the economic downturn, steep inflation, COVID-19 and finally the Beirut blast have pushed the number of Syrian refugee families living under the extreme poverty line to a staggering 89% in 2020, up from 55% only a year before. Half of all Syrian refugees in the country are food insecure compared to 29% in 2019.

“We are grateful to our donors who have supported us over the years, allowing the U.N. World Food Programme to continue to put food on the table for millions of Syrian families inside and outside Syria. We can’t stop now. Support to the Syrian people is key to regional and to international stability,” Fleischer said.

The United States, Germany and the European Commission have been the U.N. World Food Programme’s top donors over the past decade, providing a total of $6.8 billion for operations inside Syria and in neighboring countries.