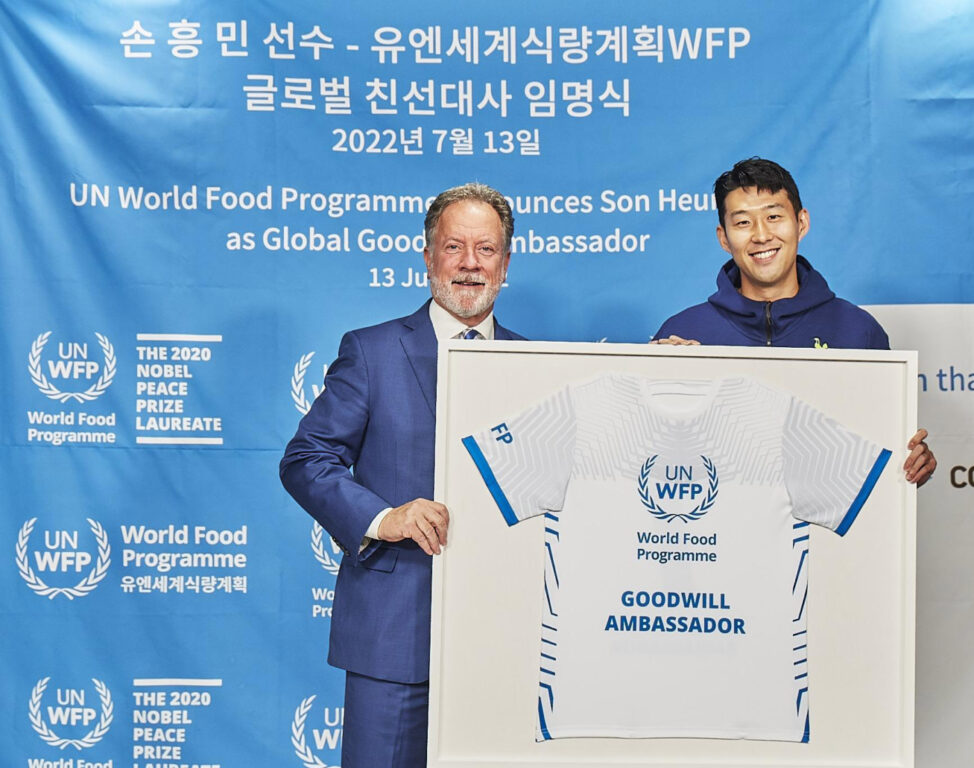 Seoul, Republic of Korea – Son Heung-Min, a prominent English Premier League football player for Tottenham Hotspur, who scored 23 goals in the 2021/22 season, making him one of the top scorers of the season and earning him the Golden Boot, has been announced as the United Nations World Food Programme’s (WFP) Global Goodwill Ambassador.

The announcement was made at the Seoul Sangam Stadium in Korea ahead of a friendly match between Son’s football club Tottenham Hotspur and the K-League All Stars. The match is part of the Spurs’ pre-season tour hosted by Coupang Play.

“My own experience of overcoming enormous challenges with courage and positivity during my teenage life abroad and being away from my family, encouraged me to be able to support people in challenging situations. As a U.N. World Food Programme Goodwill Ambassador, I will be a voice to support the mission to end hunger as the pathway to global peace and stability – for the people recovering from conflict, disasters and the impacts of climate change. My passion and courage in the football field will continue to extend beyond the playing field to support U.N. World Food Programme operations,” said Son Heung-Min.

With considerable influence and popularity spanning across continents, Son will not only shine a spotlight on the plight of the millions of people going to bed hungry but will also be a voice inspiring global commitment and action to end hunger.

“We are thrilled to welcome Son Heung-Min – a true star of the footballing world – to the U.N. World Food Programme family. With Son on our team, we’re more determined than ever to kick hunger into touch,” said David Beasley, U.N. World Food Programme executive director. “Son joins us at a crucial time when an unprecedented 345 million people are marching toward starvation, and another 828 million go to bed hungry each night. I hope his compassion will inspire soccer fans all over the world to join our campaign – we truly need all hands on deck to avoid a global hunger catastrophe.”

Prior to being announced a Goodwill Ambassador for the U.N. World Food Programme, Son was already a passionate and dedicated supporter of the organization. Last year, he lent his voice to a video titled, “We Deliver” which draws powerful parallels between the commitment of U.N. World Food Programme to humanitarian action and the player’s commitment and ability to deliver goals when most needed.

The U.N. World Food Programme works in over 120 countries and territories and reached more than 128 million people in 2021.

Photos from the announcement ceremony will be made available here.

The U.N. World Food Programme does not endorse any product or service.

Son Heung-min is a South Korean professional footballer who plays as a forward for Premier League club Tottenham Hotspur and captains the South Korea national team. Considered one of the best players in the world and one of the greatest Asian footballers of all time, he is known for his explosive speed, finishing, two-footedness and ability to link play. In the 2021–22 season, he won the Premier League Golden Boot award with 23 goals, becoming the first Asian player to do so. Outside of football, Son is viewed as a symbol of national pride in South Korea for his achievements.