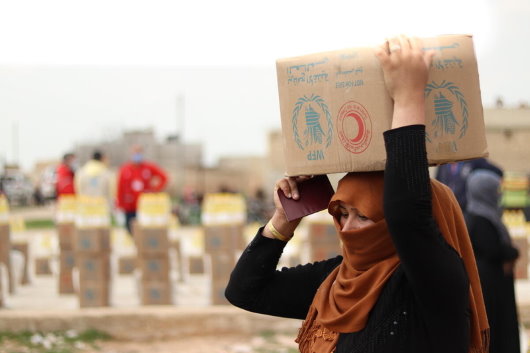 CAIRO – As a critical conference opens in Brussels on the future of war-ravaged Syria, the United Nations World Food Programme (WFP) is appealing for the funds it needs to provide urgent food assistance to millions of Syrians who today face the worst humanitarian conditions since the start of the conflict.

A record 12.4 million people in Syria, some 60 percent of population, do not know where their next meal is coming from. Food prices have increased by 222 percent in a year, driven by the tumbling value of the Syrian pound, continuing fuel shortages and ongoing conflict. The economic crisis in neighbouring Lebanon has added another layer of pressure just as the COVID-19 pandemic has eaten into incomes.

“Syrians are hanging by a thread and, while the world is transfixed by a global pandemic that is forcing everyone to look inwards, we must not forget the world’s weakest countries,” said Corinne Fleischer, U.N. World Food Programme Regional Director for the Middle East and North Africa. “We are grateful for the support of our donors over the years. Their contributions have saved lives. But the Syrian people need their support more than ever before.”

The U.N. World Food Programme needs $375 million from now until August for operations in Syria, where it assists 4.8 million people every month. To stretch existing funding, the agency has already been obliged to reduce food rations to most of these by 30 percent.

Meanwhile, Syrian refugees in neighbouring countries also face a daily struggle for survival as the pandemic squeezes their limited incomes. A quarter of refugees in Jordan are food insecure and almost two-thirds are at risk of becoming food insecure. In Lebanon, refugees along with the rest of the population are grappling with the effects of a financial crisis that has seen the currency plummet and prices of basic food commodities shoot skywards.

The U.N. World Food Programme needs a further $259 million to continue assisting Syrian refugees in the region. Those operations, which support Syrians and the communities that host them, reach 2.2 million people per month.

Without new funding to assist Syrians in and outside of Syria, the U.N. World Food Programme will be forced to further reduce the size of monthly food rations or exclude people from assistance.