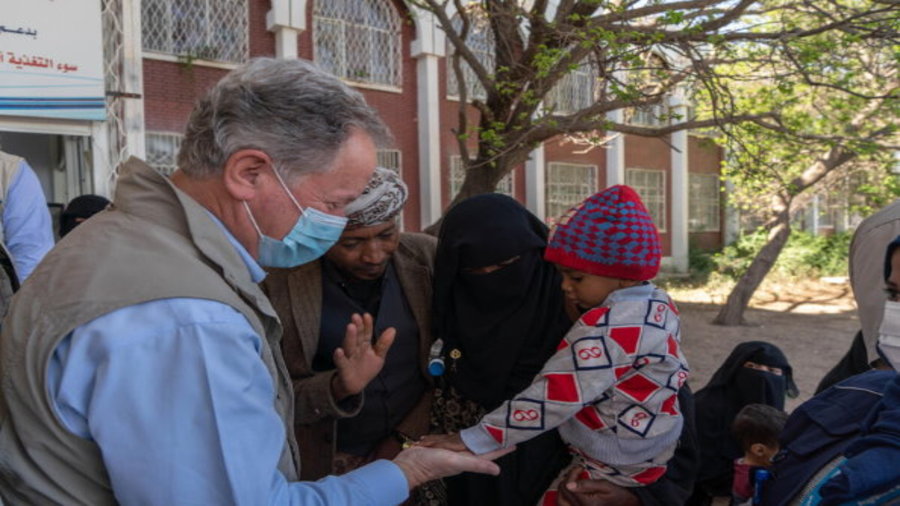 ADEN/SANA’A – The Executive Director of the United Nations World Food Programme (WFP) issued an urgent plea for peace in Yemen and called for funding to help the most vulnerable hungry families as he wrapped up a two-day visit to the country where the worst famine the world has seen in modern history is now looming.

“Over half of the people in Yemen are facing acute food shortages with millions knocking on the door of famine. These are not just numbers. They are real people and it is heartbreaking,” said David Beasley. “Famine-like conditions are emerging across Yemen and the answer is simple. We have a vaccine for this. It is called food. All we need to save lives is funding.”

In Sana’a, Beasley visited a hospital and witnessed firsthand the devastating toll that malnutrition is having on Yemen’s children. Half of all children under five in Yemen – 2.3 million – are projected to face acute malnutrition this year, with nearly 400,000 suffering from severe acute malnutrition and likely to die if they do not get urgent treatment.

“In the children’s wing of any hospital in the world, you usually hear crying or laughter but in these hospitals in Yemen, there is dead silence as the children are too sick and too weak to either cry or laugh. But they are still the lucky ones who were able to make it to the hospital,” Beasley added.  “Many poor families cannot afford the cost of transportation to bring their children to hospitals or they arrive and are turned away because there are not enough beds for their sick children.”

“Meeting Sultan shows me what the U.N. World Food Programme can do. We can make a difference here, but we need the funds to do it – and these children need to be given a chance to grow up in a country at peace,” said Beasley.

Beasley also saw the progress of the U.N. World Food Programme’s biometric registration program, making sure food assistance is delivered in an accountable and transparent way.

Right now, humanitarian food assistance is the first line defence against spiralling hunger in Yemen, where over 16 million people are food insecure. Nearly 50,000 people are already facing famine-like conditions (IPC 5) and a further five million people are only one step away (IPC 4).

The U.N. World Food Programme is looking at all options to scale up assistance to meet the growing needs and avert a devastating famine. The U.N. World Food Programme is already prioritizing monthly assistance to 11 districts with populations in famine-like conditions in a bid to save lives and prevent further decline. But more needs to be done for millions who are at risk of slipping further into hunger as conflict and displacement, crippling fuel shortages and rising food prices makes life harder each day.

14 vessels carrying fuel are currently being held off Yemen’s Red Sea coast unable to berth. None have entered Al Hodeidah port since  January 3, 2021. With fuel reserves nearing empty, hospitals have been left without power and the commercial sector struggling to transport food and basic goods. This is forcing people to turn to the black market where prices are up to three times higher than the official rate, all contributing to food prices that are climbing well out of reach for millions.

“This is hell. Absolutely horrendous. Yemen is becoming the worst place on earth and it is totally man made,” said Beasley.

As the world marked International Woman’s Day on March 8, the U.N. World Food Programme chief visited a U.N. World Food Programme-run kitchen in the southern city of Aden which employs local women – many of them displaced by conflict, others their families’ sole breadwinner – to make packed lunches for schoolchildren. He then visited a school to distribute the lunches to children.

“When we empower women and girls, we take a step towards zero hunger,” said Beasley. “But we need Yemen’s war to end so these brave and ambitious girls can grow up to be the doctors, pilots and teachers they want to be.”

“Food assistance saves lives,” said Beasley. “But it does not solve the problems that caused Yemen’s crisis, nor the underlying drivers of food insecurity. Only with a lasting solution will it be possible to reinvigorate the economy, stabilise the currency, ensure the free flow of basic goods and fuel through Yemen’s ports and start paying public salaries, allowing people to have the money required to buy food and rebuild their lives.”

David Beasley is among the top UN officials who will address a UN Security Council session on Yemen starting at 10am EST on 11 March. The event will be webcast: webtv.un.org