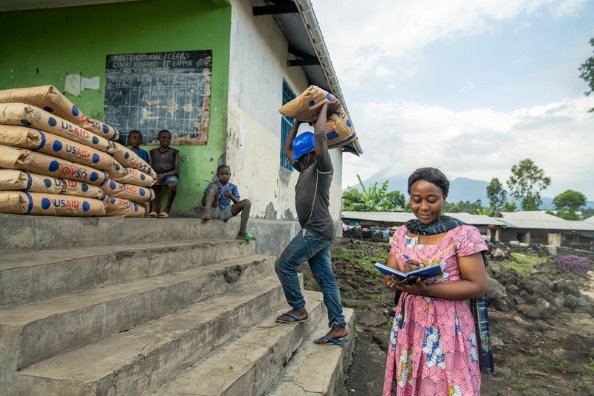 KINSHASA – The United Nations World Food Programme (WFP) has started providing emergency food rations to people displaced from their homes in Goma by the sudden eruption of Nyiragongo volcano on May 22.

The U.N. World Food Programme and partners have so far delivered food to some 43,000 displaced people in Sake, Minova and Rutshuru, towns close to Goma that have seen an influx of people fleeing their homes.  Thousands of displaced people remain scattered across the region amid warnings of further eruptions. Those who have had to flee their homes have been receiving 10-day rations of flour, legumes, oil and salt.

“People are feeling helpless and getting desperate. The families that have fled are completely reliant on government and aid agencies for basics like food, water and shelter,” said Erwan Rumen, the U.N. World Food Programme’s Eastern Area Coordinator. “The U.N. World Food Programme is very concerned about the food and nutrition situation of the people forced out of their homes. We are providing them with the food assistance they need in this crisis.”

The eruption left more than 30 dead and caused an estimated 400,000 people to either flee their homes or to be evacuated. Families who left with their few belongings, either headed north on foot on the Rutshuru/Beni road, recently cleared of the lava that had blocked it, or round the lake towards the towns of Sake and Minova, located 17 miles and 29 miles west of Goma, respectively. Some with vehicles continued further south to Bukavu.

Jointly with the United Nations Children’s Fund (UNICEF), the U.N. World Food Programme is also delivering food to 300 children who have been separated from their families in the chaos that followed the eruption.

North Kivu is already facing armed conflict, mainly in Beni territory where attacks on civilians continue. In efforts to bring stability to this conflict-hit province, the government has declared a security emergency there, and in Ituri, immediately to the north. Shortly after military rule was introduced, Nyiragongo erupted.