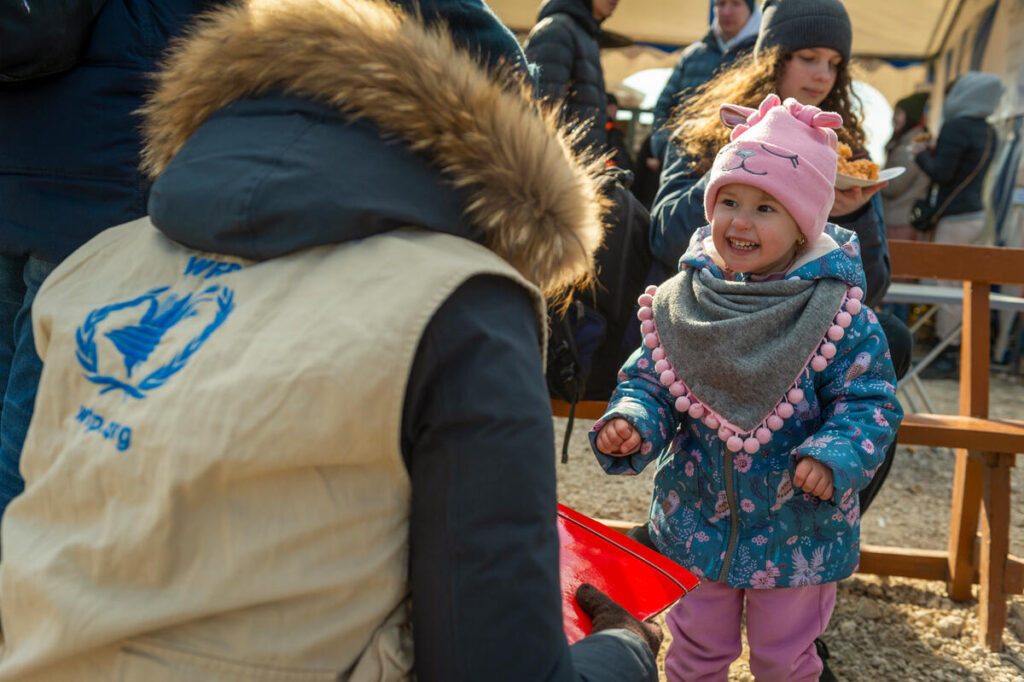 LVIV – One month into the conflict in Ukraine, the United Nations World Food Programme (WFP) is providing emergency food assistance to 1 million people in the country and has built systems able to deliver food at scale to communities in need. Trucks, trains and mini vans are today delivering food supplies to the most vulnerable people across the country and more convoys are expected in coming days.

Following a massive scale-up of operations, the U.N. World Food Programme has provided 330,000 loaves of freshly baked bread to families in the city of Kharkiv, cash assistance to displaced people in Lviv and ready-to-eat food in various parts of the country. U.N. World Food Programme emergency food supplies have also made it to the conflict areas of Sumy and Kharkiv through two interagency humanitarian convoys. These achievements come despite a volatile security situation, difficulties finding partners on the ground and the challenges of serving a population on the move.

“Just one month ago, we had no presence on the ground, no staff, no network of suppliers or partners. To build an operation from the ground up and get food to 1 million people seemed a monumental challenge,” said Jakob Kern, the U.N. World Food Programme’s emergency coordinator for Ukraine. “Now that the structures are in place, we need the funding to keep delivering assistance, and to help 3 million people in need.”

Over 6.5 million people are displaced inside Ukraine and the pre-conflict supply chain systems for feeding the country’s population have broken down. According to the preliminary findings of a remote assessment by the U.N. World Food Programme, food is among the top three concerns for people inside Ukraine, along with safety and fuel for transportation.

The U.N. World Food Programme estimates that 45% of the population are worried about finding enough to eat. In a country which used to grow food for 400 million people around the world, one person in five now reports having to reduce the size and number of their meals while adults skip meals so their children can eat. Close to 4 million people – mainly women and children – have fled the conflict and become refugees in neighboring countries.

“We’re talking about a catastrophe on top of a catastrophe,” U.N. World Food Programme Executive Director David Beasley told the United Nations Security Council in a briefing on Tuesday. “We would have never dreamed anything like this would be possible. And it’s not just decimating Ukraine and the region. It will have a global impact beyond anything we’ve seen since World War II.”

The conflict in Ukraine is triggering a wave of collateral hunger elsewhere in the world. Global food prices have increased sharply since the onset of the conflict – reaching an all-time high in February 2022. These hikes will affect local food prices and further limit access to food for millions of people who are already under stress because of food inflation in their countries.

“The consequences of the conflict are radiating outwards,” said U.N. World Food Programme Regional Director Corinne Fleischer. “Higher prices mean more people around the world will fall into hunger. At the same time, we at the U.N. World Food Programme also have to pay more for the food we buy, so our operations to help those people also take a hit. We need the world to step up at this critical time.”

The U.N. World Food Programme requires $590 million to assist 3.1 million crisis-affected people and IDPs on the move inside Ukraine with in-kind and cash distributions, as well as refugees and asylum seekers from Ukraine in neighboring countries for the next three months.