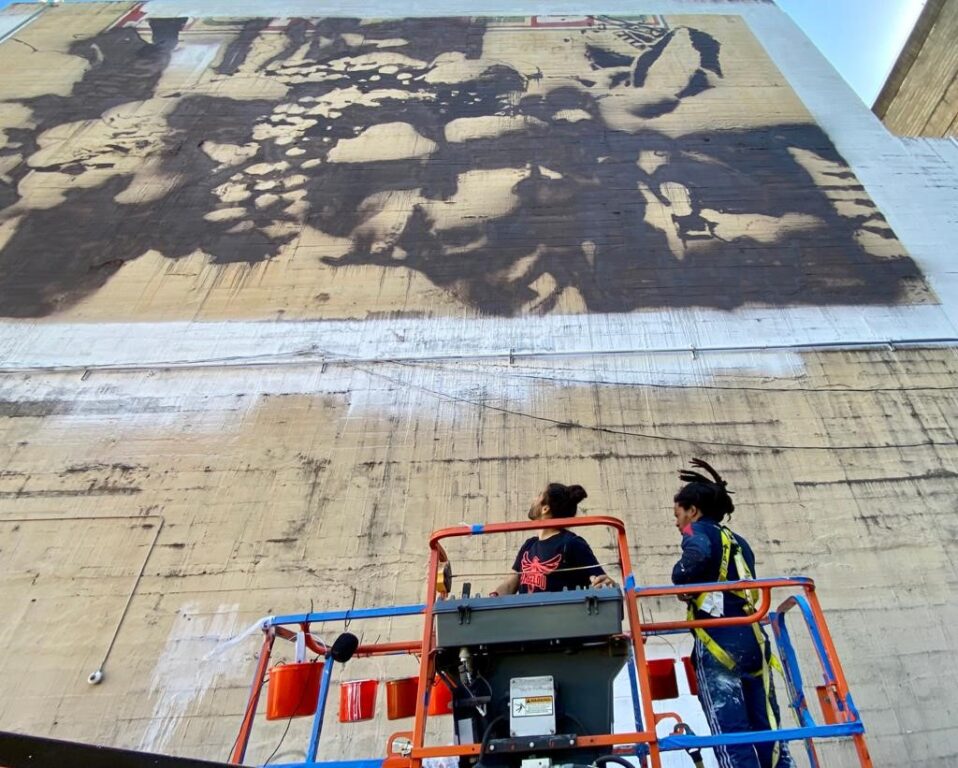 Six murals, curated by SAM, are aimed at raising awareness and mobilizing support to combat rising U.S. and global food insecurity, especially in the socioeconomic fallout of the pandemic. The first mural, created by prominent street artists Axel Void and Reginald O’Neal, will be located in New Orleans, Louisiana. The large mural, on the back of the legendary Orpheum Theater, will be completed by February 28th. This mural, created during Black History month, draws attention to the significant impact food injustice has had on the African-American community.

Mural in progress by Axel Void and Reginald O’Neal in New Orleans for the #ZeroHungerMurals series.

“At this critical time in the COVID-19 pandemic, we are thankful to our partners for helping to raise visibility of food insecurity both globally and domestically as well as activate citizens to mobilize around this important issue. While our programs feed people living on less than $2 a day in the most impoverished countries, we understand the severity of the American hunger crisis and support the efforts of both non-profits and corporate partners to feed those in need,” said Barron Segar, president and CEO, World Food Program USA.

We are facing the greatest hunger crisis of our time. Hunger is on the rise, with more than a quarter of a billion people marching toward starvation. In fact, famine is looming in four countries: Yemen, South Sudan, Burkina Faso and northeast Nigeria. It is only U.N. World Food Programme intervention supporting national governments and partners that has so far prevented famine. The U.N. World Food Programme has launched the biggest operation in its nearly 60-year history, with plans to feed up to 138 million people this year.

The United States has been hit with an unprecedented hunger crisis as well, as the pandemic’s fallout triggers unemployment, income loss, and widespread food insecurity. According to data from the U.S. Department of Agriculture[1], African-Americans are twice as likely to face hunger as non-Hispanic, Caucasian households. To give back to local minority communities, Kellogg Company is donating cash to support local food justice programs in each of the six cities.

“To raise further awareness about the importance of food justice, Kellogg is making a $10,000 donation to organizations in each of the six communities that are working to provide sustainable and equitable access to food. Kellogg has long been committed to addressing food insecurity in North America – and across the globe – through its Better Days purpose platform, through which we’ve donated 2.4 billion servings of food worldwide,” said Stephanie Slingerland, Kellogg’s Senior Director of Philanthropy & Social Impact.

The mural series is a continuity of the “Zero Hunger” mural created in New York for the United Nation’s 75th anniversary. Visitors to the murals can use Street Art for Mankind’s free “Behind the Wall” app to scan or photograph the mural, instantly accessing more details about the mural, the hunger crisis, and how to take action globally and locally.

“We are honored to expand our Zero Hunger series around the United States with the World Food Program USA and Kellogg. We hope our gigantic murals, created by an incredibly diverse group of talented street artists, will inspire the public to reflect on the current situation and do their share to support the fight against hunger within their communities and beyond. Together we can see bigger and create a hunger-free world,” said Audrey and Thibault Decker, Co-founders of Street Art for Mankind.

About Street Art for Mankind (SAM) | SAM is a 501c(3), non-profit organization working with prominent street artists from all around the world to raise awareness on SDG’s and child trafficking through the power of art. SAM has collaborated with the United Nations since 2017. This new “Zero Hunger” series is a continuity of the “Zero Hunger” mural created for the 75th anniversary of the UN at the UN General Assembly in New York. For more information about SAM contact us at:

About Kellogg Company | At Kellogg Company, we strive to enrich and delight the world through foods and brands that matter. Our beloved brands include Pringles®, Cheez-It®, Special K®, Kellogg’s Frosted Flakes®, Pop-Tarts®, Kellogg’s Corn Flakes®, Rice Krispies®, Eggo®, Mini-Wheats®, Kashi®, RXBAR®, MorningStar Farms® and more. Kellogg brands are beloved in markets around the world. We are also a company with Heart & Soul, committed to creating Better Days for 3 billion people by the end of 2030 through our Kellogg’s® Better Days global purpose platform. Visit www.KelloggCompany.com or www.OpenforBreakfast.com.