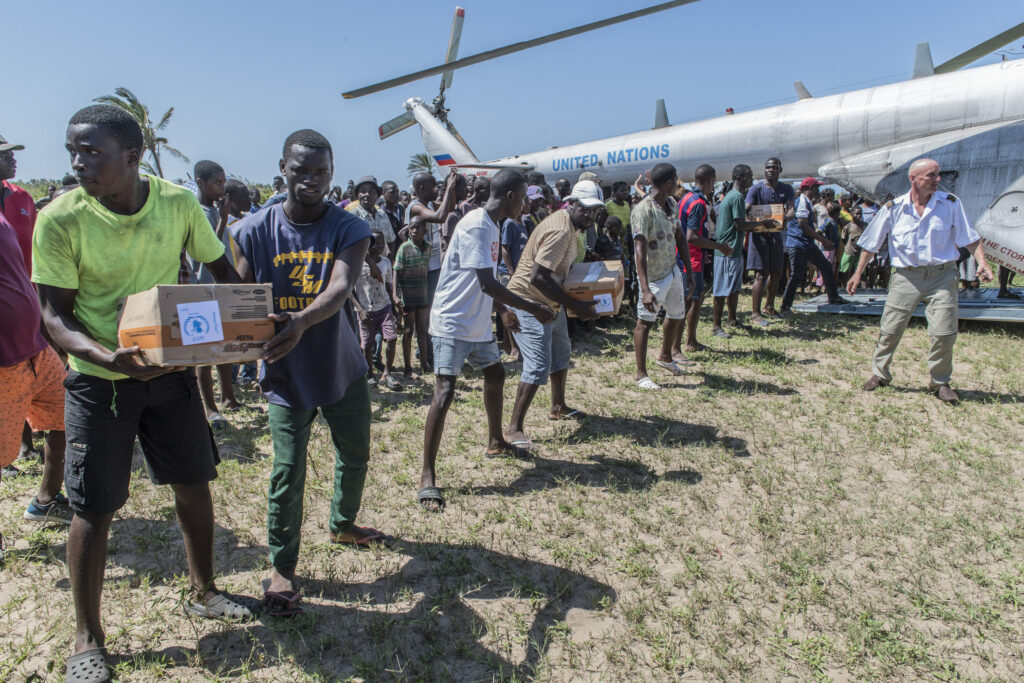 BEIRA/MAPUTO – At the end of a two-day visit to Mozambique, the Executive Director of the United Nations World Food Programme, David Beasley, today said the international community must step up support to victims of the recent cyclone and flooding that have devastated large areas of the country.

After arriving Tuesday in Beira, which was struck by Cyclone Idai on March 14, hitting the port city of half a million people, Beasley overflew the nearby town of Buzi – which had been all but submerged by raging floodwaters – and met survivors receiving airlifted WFP assistance in the isolated village of Guara Guara.

An estimated 400,000 hectares of crops – primarily corn – were washed away just weeks ahead of the main April–May harvest. Other key sources of income, like livestock and fisheries, have also been badly affected.

Victims will need sustained support until they can get back on their feet – in the case of subsistence farmers, until the next main harvest in mid-2020. “We need to work together with the Government of Mozambique and the communities to ensure rehabilitation is done in a way that will prevent this devastation happening again, build better everything: houses, schools and health centers to stand the shocks,” added Beasley.

The disaster has demonstrated how vulnerable communities are to climate shocks and will inevitably push up already high malnutrition rates.

Since the cyclone hit, WFP has provided food assistance to more than 150,000 people, intends to reach half a million in the coming weeks, and, as soon as possible, all 1.7 million people urgently in need of food.

Displaced cyclone victims sheltering in scores of schools and churches in Beira and surrounding areas have received easy-to-prepare fortified blended food. Sixty-six tons of high energy biscuits airlifted into the country have been dropped by helicopter to people stranded by the floodwaters.

With 86,000 metric tons of commodities needed in the next three months, WFP is procuring large quantities of cereals, vegetable oil and fortified blended foods elsewhere in southern Africa, and shipping and trucking them into Mozambique. As conditions permit, WFP will increase local procurement.

As lead of the global humanitarian logistics “cluster” that helps coordinate the relief effort, WFP has deployed to Beira three MI-8 transport helicopters and a freight aircraft to support the broader humanitarian response. As lead of the emergency telecommunications cluster, WFP has been working to re-establish vital networks that can accelerate the response by government and humanitarian agencies.

Almost 60 additional WFP staff have been deployed to Mozambique, and 45 more are on the way: emergency coordinators, air operations managers and programming, logistics and telecommunications experts.

WFP requires $140 million for the next three months.

On Wednesday in Maputo, Beasley met President Nyusi, key government ministers and donor representatives. “In these last two days, I was heartbroken by the devastation, but I also saw courage and determination on the faces of the Mozambican people”, he said. “The terrible destruction cannot dampen their spirits. WFP will stay with them, scaling up to help as many as possible.”

“I urge the international community to respond quickly and generously, because lives are truly in the balance right now.”

The United Nations World Food Programme saves lives in emergencies and changes lives for millions through sustainable development. WFP works in more than 80 countries around the world, feeding people caught in conflict and disasters, and laying the foundations for a better future. Follow us on Twitter @wfp_media, @wfp_mozambique