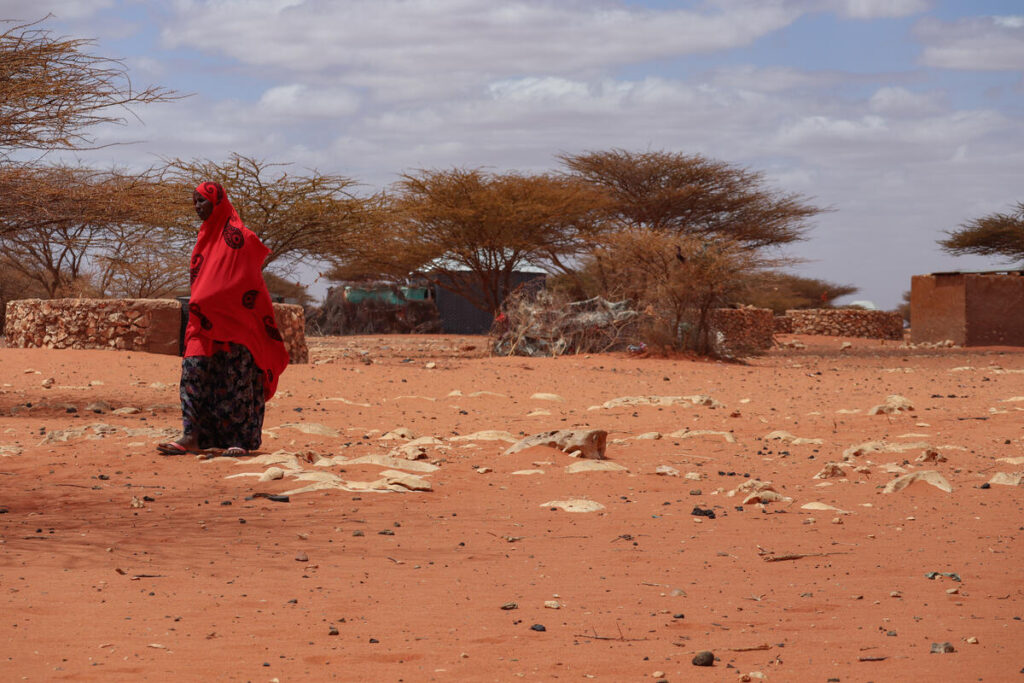 Drought in Somalia: The Race to Save Lives as the Climate Crisis and Conflict Drive Hunger

“There’s a level of desperation that I haven’t seen since the height of the Darfur crisis,” says Laura Turner, World Food Programme  (WFP) Deputy Country Director for Somalia.

“This is significantly worse.”

WFP is in a race against time to save lives, with famine projected in Baidoa and Burhakaba, in the country’s Bay region, in coming months – Somalia is among Horn of Africa countries suffering their worst drought in 40 years.

“We’re right now in the middle of a rainy season that hasn’t materialized,” says Turner, speaking from the town of Galkayo – where she has an armed escort. “We’re now skipping yet another planting and harvest cycle – every cycle that we miss, things get progressively worse for the people we support, particularly in locations that we can’t reach with assistance consistently or routinely.”

In responding at an unprecedented scale this year, WFP and its partners have so far managed to contain a situation that could swiftly turn into a huge human tragedy.

“We’ve managed to keep famine at bay, so far, but we’re not out of the woods yet,” says Turner. As the largest relief agency in Somalia, “WFP’s been able to sustain food and cash relief, which reached 4.1 million people last month.” 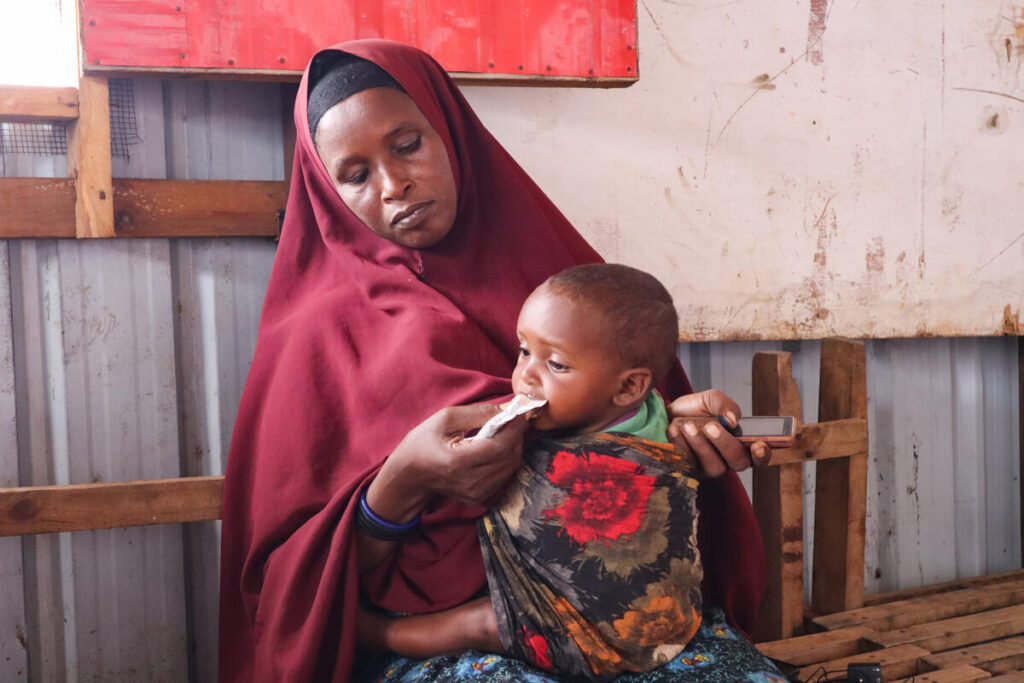 Nuuriya Ali Mohammed Nuur (30) and her baby Mohammed Nuur Mohammed (2 years old) travelled to Baidoa from a rural town in Southwest state. Her child was weak and malnourished when she arrived, but with WFP assistance he is starting to gain weight and become healthier. She is receiving emergency relief cash assistance. WFP is providing screening services for the baby.

However, “malnutrition is increasing exponentially, mortality rates are also increasing significantly – it’s only really the availability of food that’s keeping us from a famine declaration at the moment, and this is thanks to the support provided by WFP and the Food Security Cluster partners.”

When famine was declared in 2011, “over half of the deaths that were recorded were children under the age of 5,” says Turner.

She fears that children currently in camps for internally displaced people are at risk of “lifelong cognitive impacts and underdevelopment” because of malnourishment.

“We’re providing children with specialized foods to help raise their nutrition up to healthy levels, and their families with a food ration through mobile money [cash transfers] and value vouchers so that all family members can  maintain healthy and nutritious food consumption,”  Turner adds. “We also refer the children to health and nutrition services and make sure that they get support for disease, hygiene and dehydration.”

Currently, WFP is distributing some $60 million a month across the country through relief and recovery activities.

“WFP has received significant financial support in recent months which has so far meant we’ve been able to more than double our assistance to reach more than 4 million [emergency] people with relief support and half a million with nutrition support every month,” says Turner. “This has made a tremendous difference in the interagency response, but resources will largely run out at the end of the year.”

She adds that other agencies that lead efforts on water, health and treatment of severe malnutrition “are working with fewer resources, yet are equally important to arrest the drivers of mortality. We are working very closely with others for an integrated response.” 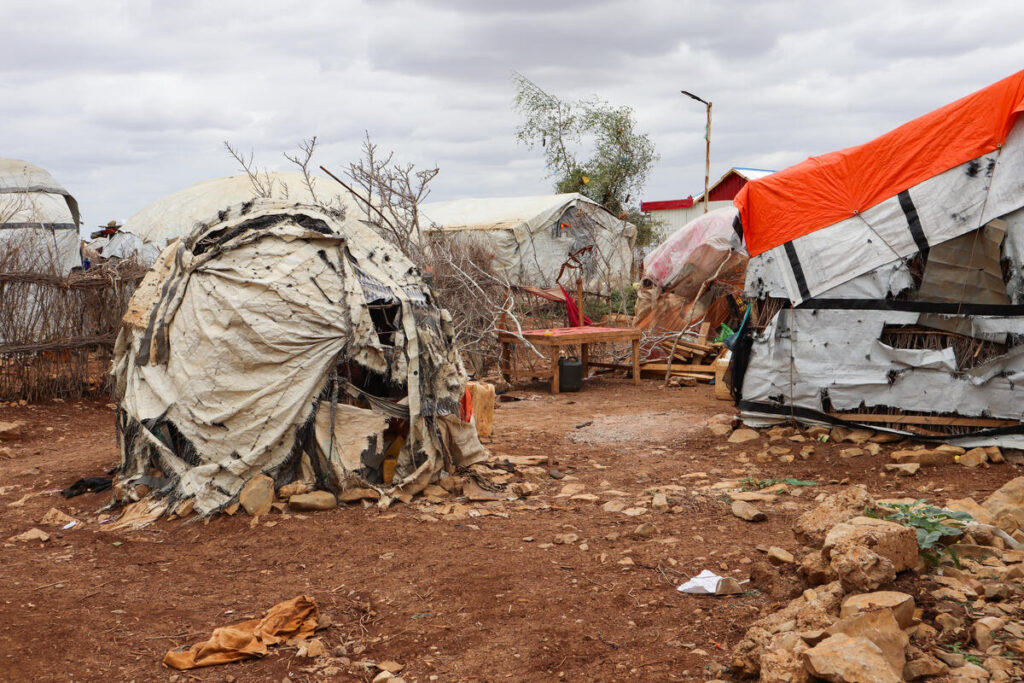 Baidoa region is one of the most drought affected regions in Somalia with some of the highest malnutrition rates in the country.

To what degree is conflict the culprit here?

“Somalia’s been dealing with insecurity for generations, but today the difference is the impact of climate change and global market volatility,” says Turner. “But having said that, insecurity is a real constraint. We are doing our best to get to populations in hard-to-reach and inaccessible areas, precisely because those populations that are impacted either by non-state armed groups, or lack of transport options, are the communities projected to fall into famine – there is a direct correlation.”

The WFP-managed United Nations Humanitarian Air Service provides extensive “fixed-wing” support in Somalia. In recent weeks, a helicopter has enabled access to a number of locations that do not have runways.

“We need to make sure lives are not lost and that is where we are pulling out all the stops,” says Turner. “But we are also focusing on what happens next by working with our partners to reinforce community resilience, and collaborating closely with the diaspora and the business community on investments into systems supporting families to mitigate similar crises in the future.”

She adds: “We appreciate the donors that have been supporting us and we do hope that they will continue to be generous.”

This article was originally published on WFP.org