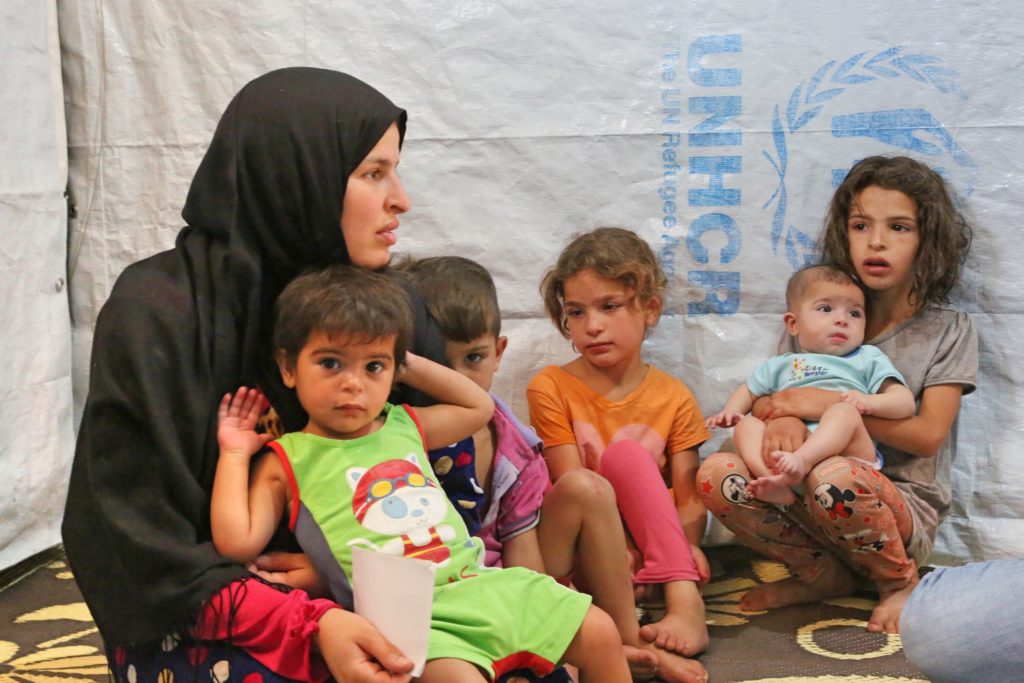 “Everyone Abandoned Me”: The Struggle of a Single Mother Trying to Feed Her Children While Living as a Refugee

One hundred families live in Industrial City. That’s the moniker refugees have given to a ramshackle metropolis of plastic sheeting, timber frames and damp clothing flapping in the dusty wind at a refugee camp in Lebanon. In the shadows of cement factories, each family has a different story to tell, none of which are easy to hear.

Fatima sits on a grubby mat beneath a whirring electric fan. There’s nothing else in the room since she sold most of her belongings to buy food and pay rent. There’s just one other room — a dark and damp kitchen/bathroom. This is where Fatima lives with her six children.

Back in 2013, newly married and with one child, Fatima lived in rural Aleppo. She spent her evenings listening to crickets and sipping tea with her husband. They’d talk about growing old together and the songs they’d teach their grandchildren.

One night, Fatima’s bucolic safe space was destroyed and life turned upside down when a missile slammed into the house next door. The flash and explosion still haunt her at night. The couple packed bags in the dark, and at day break they ran as fast and as far as they could towards Lebanon.

They settled in a field over the mountains and Fatima’s mother joined them. The family soon had to find ways to make ends meet. The husband sought out work and supplemented their depleting savings to buy food, clothing and – when winter came – blankets and fuel.

Weeks and months drifted by as more and more violence wracked their home city and more and more Aleppines followed suit, becoming refugees in Lebanon. Fatima had four children by then and one day the World Food Programme (WFP) gave her an debit card loaded with money to buy food.

One morning, when Fatima was pregnant again, her husband stepped outside, announcing he was going to buy a television.

A year later, he’s yet to return.

Fatima had no option but to join other women picking potatoes in the nearby fields. It was back-breaking work for little pay. She’d leave her increasingly frail mother at home to keep a watchful eye on the children, until one night she died in her sleep. 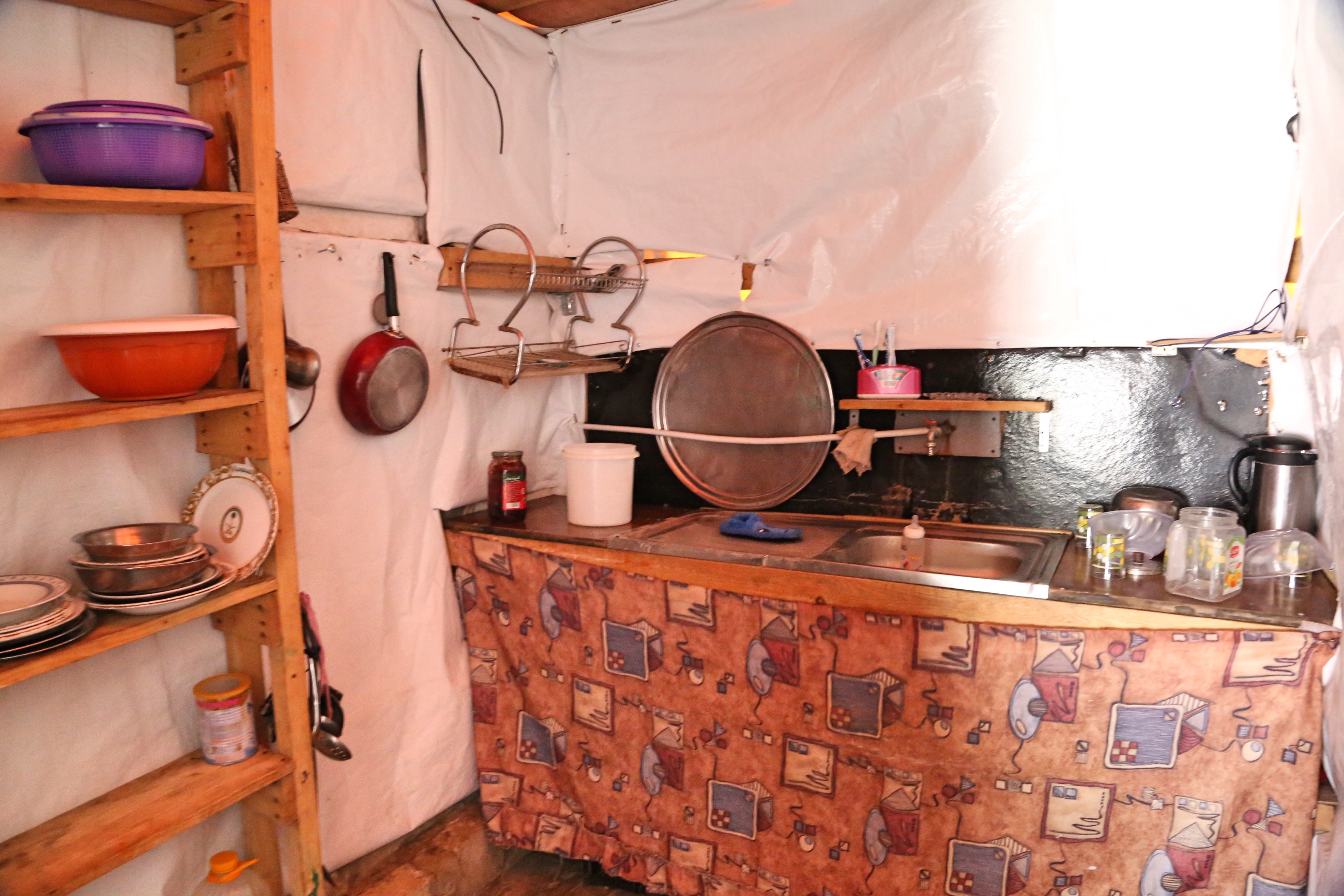 Now, Fatima’s unable to leave home. “Everyone abandoned me,” she says. Once, she left the kids alone and returned to find them in the kitchen unscrewing a valve on the butane canister. Her only remaining option now is to ask neighbors for childcare help, but friends are few and far between and taking care of her now six children is more responsibility than most will accept.

Four-month-old Anij cries a lot. Really, a lot. She looks sickly and her only source of nourishment is an expensive milk formula as Fatima is unable to produce breast milk. 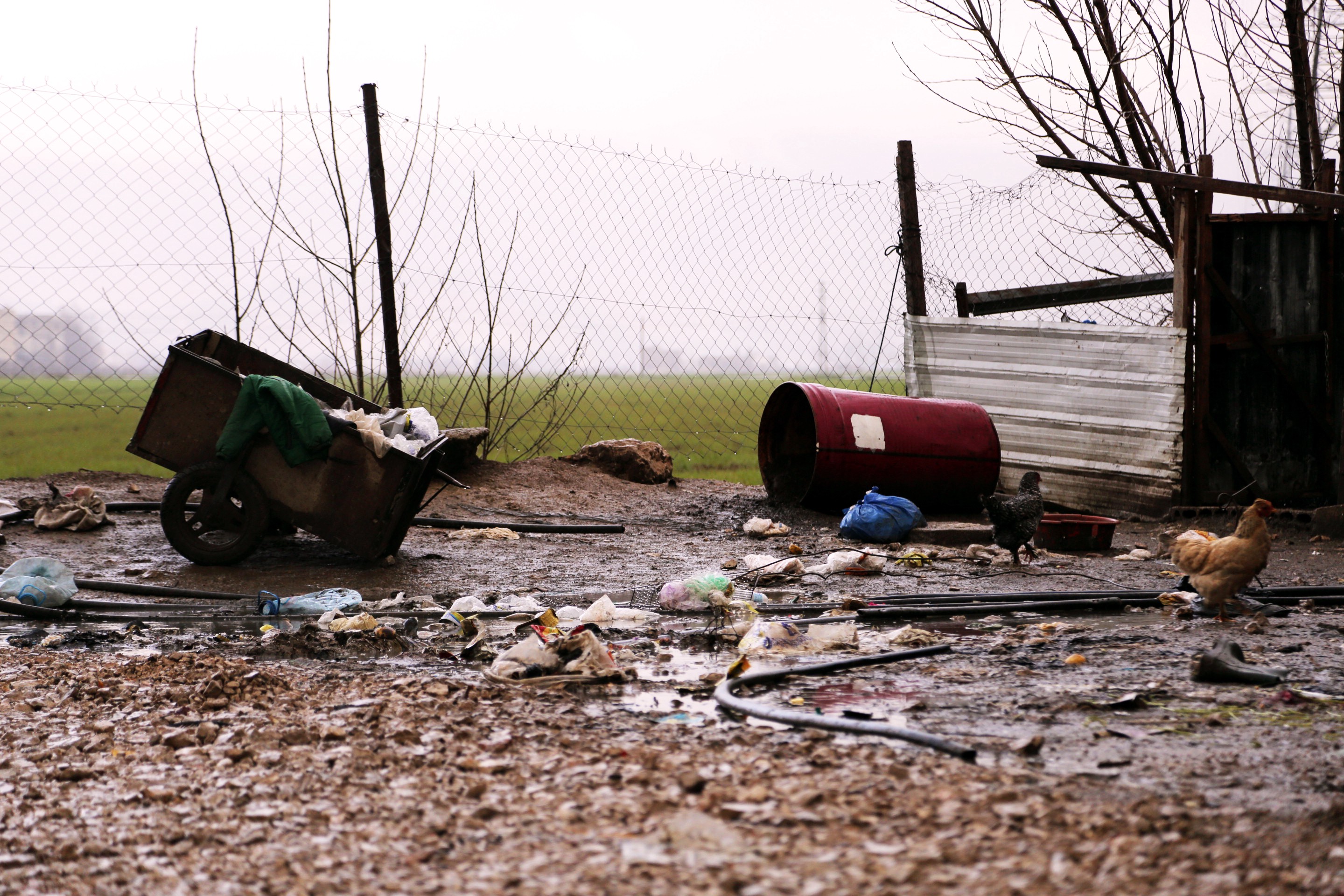 The view from Fatima’s front door.

Fatima is desperately lonely and struggling from day break to dusk. The evenings she used to spend mapping her future have been replaced by evenings consumed with worry that another child will become sick tomorrow and she won’t have a spare dollar for medicine.

The kitchen/bathroom is grim. It’s dark, miserable and scurrying cockroaches give the impression of a moving floor. There’s no fridge, and the summer sun and humidity rapidly spoil food.

There’s half a jar of tomato sauce on the counter and a bottle of oil on the ground, but otherwise there’s no food to be seen.

“I have a burner but only cook rice on it. And we eat two bags of bread a day. It’s filling but not the best,” she says. 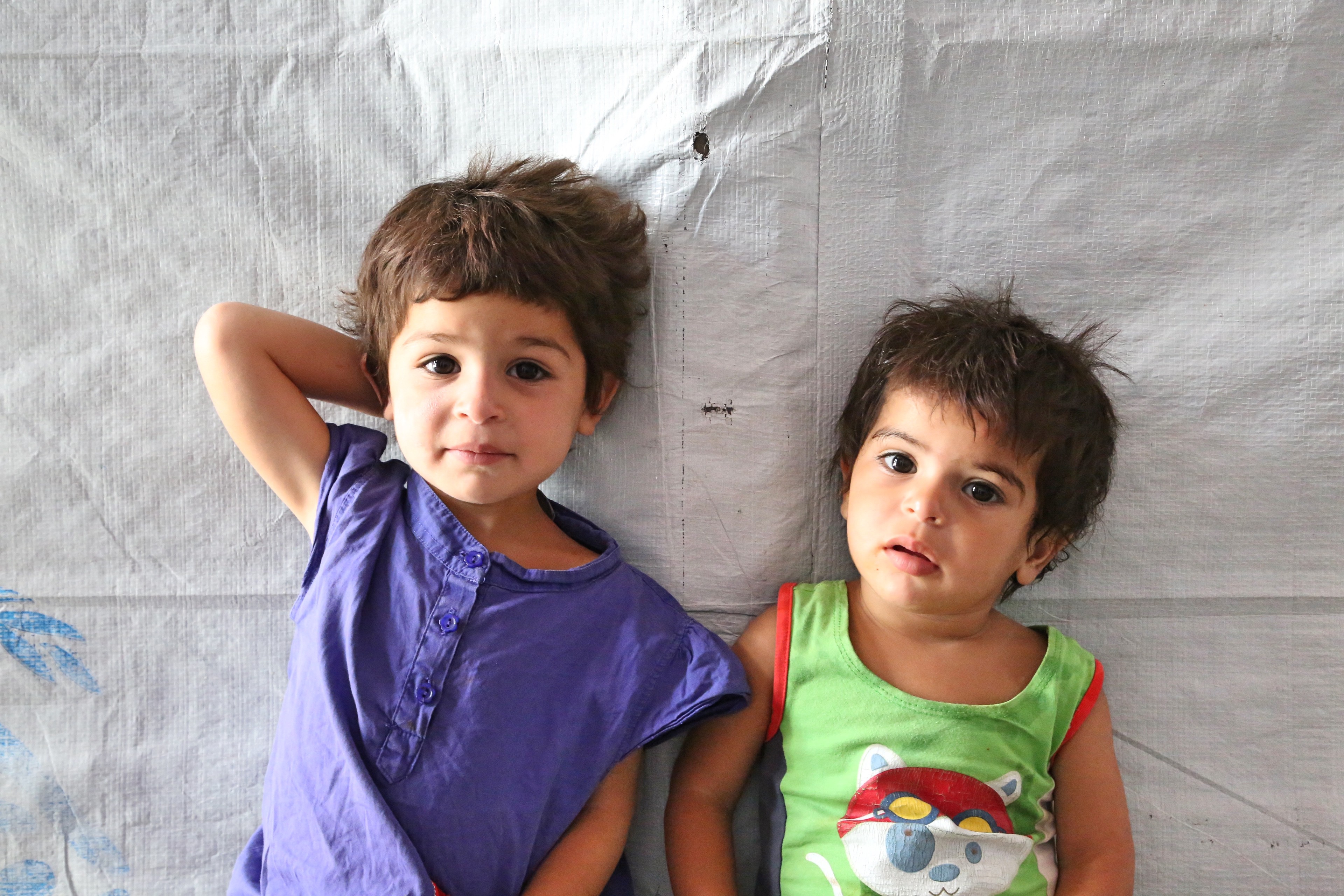 Fatima knows Anij doesn’t get the nourishment she needs. She implores us to compare her legs with the legs of the four-month-old next door. She says he looks “like a real child.”

She’s saving cash to replace the roof that won’t stand up to another winter. Two strong storms earlier this year battered the house and Fatima is fearful that without renovations, the family will end up homeless.

The family receives cash from WFP that Fatima withdraws from an ATM. From that point onwards, she decides where and how to spend it. With a $1,000 debt at a local shop, $120 of monthly rent, $20 of school transport fees and seven mouths to feed, that money is welcome but it only goes so far. 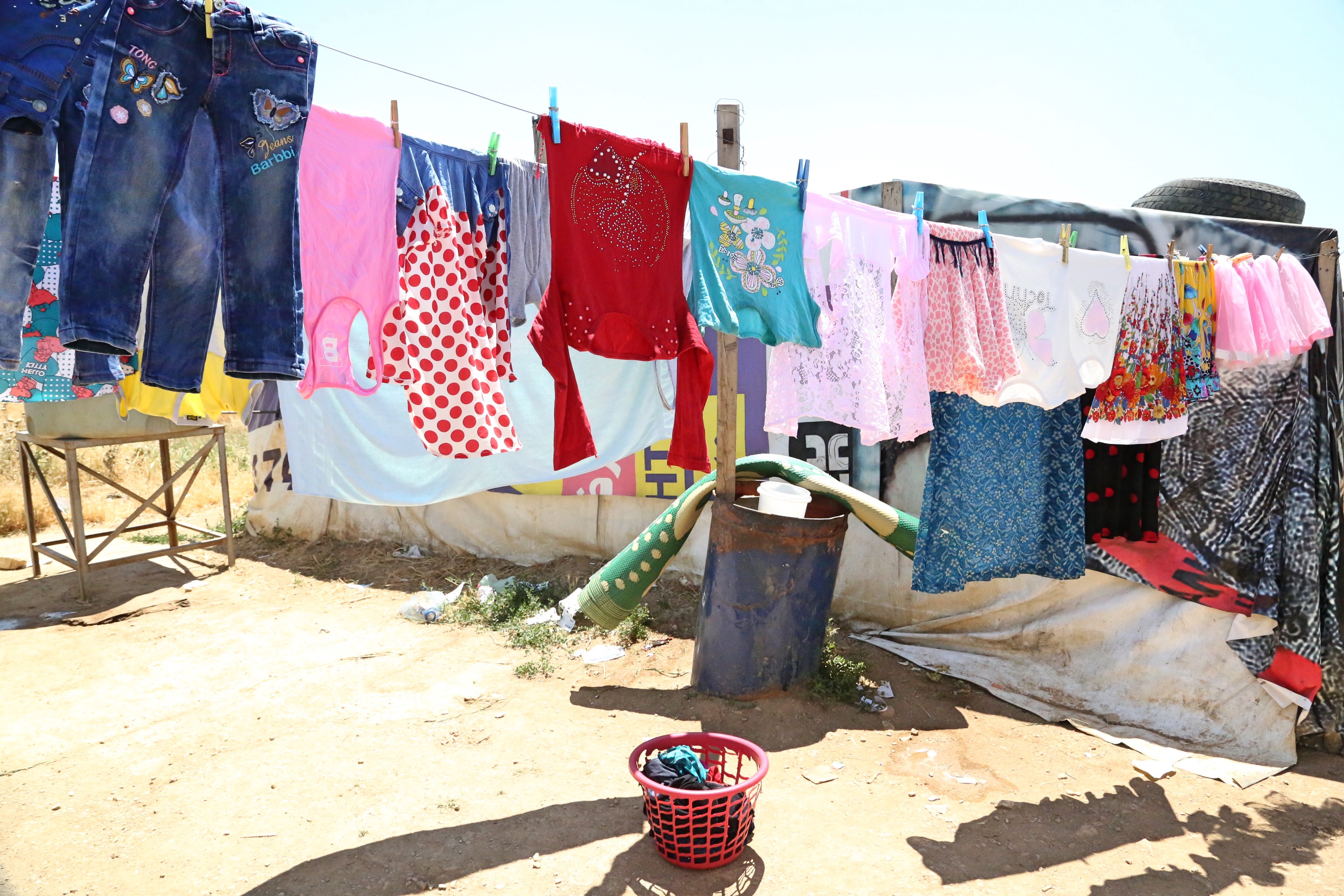 34 percent of Syrian refugees live in non-residential or non-permanent structures.

For most vulnerable families in Lebanon, like Fatima’s, survival is possible only thanks to generous multi-purpose cash contributions. The Government of Norway has been a stalwart supporter of the program since 2017. Such contributions ensure that while their misfortune continues, WFP is not abandoning the neediest.

Fatima’s 7-year-old Wafaa is now as old as the conflict. While she physically attends school, her mind is elsewhere. Convinced that her father is returning one day with that television, she barely focuses on anything else.