You might not know this, but global hunger isn’t about a lack of food. The reality is, there’s enough of it to nourish every single person on the planet. Unfortunately, one third of all the food produced for humans never actually gets eaten. That’s roughly 1.3 billion tons of lost and wasted food per year, and it’s worth around $1 trillion dollars.

Think about the last good meal you had. Everything on your plate made its way there through a complex food chain – a long journey from farms to forks. Food is lost or wasted at different points along that chain and differs greatly around the world. Here’s the distinction:

Food loss  happens when food unavoidably becomes unfit for human consumption before people have a chance to eat it. It’s most prevalent in lower income countries when food is unintentionally damaged or destroyed by pests or mold.

Food waste  happens when we discard food that’s still fit for human consumption, either before or after it spoils. It happens most often in high-income countries at restaurants, hotels and homes.

click here for our handy waste vs loss infographic 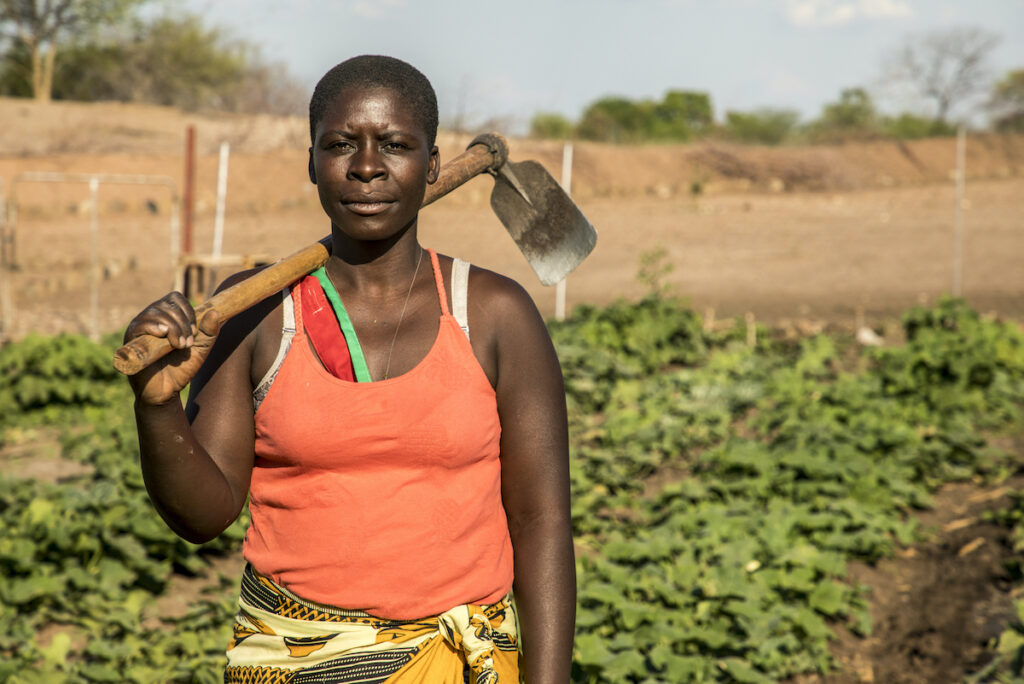 Farmers like Elizabeth often lose 40% of their crops to extreme weather, pests or mold, before they have a chance to eat it.

Food Is Lost in the Most Vulnerable Places

In low-income countries, where an overwhelming majority of the hungriest people live, very little food is wasted. But a lot of food is lost – during its growth, harvest and storage.

Food loss usually strikes early on in the food chain because of the challenges farmers face when growing, packing and storing food. Farmers in countries that are poor, conflict ridden or subject to frequent extreme weather often face an uphill battle with outdated machines and technology, inadequate storage solutions and weak economic systems. In these cases, good crops are often  lost to drought, flooding, disease, mold, vermin, bug infestations, and lack of access to buyers or markets.

Loss on this scale is devastating. For example, the value of post-harvest food loss in Sub-Saharan Africa is more than what the region receives in food assistance. And around the world, over 50 percent of the hungriest people are farmers in poor, rural areas who tend fields of five acres or less. They invest so many of their precious resources into growing, harvesting, processing, packing and storing their food, but without the right systems and resources, much of their harvest is lost, thereby perpetuating their hunger.

That’s why countries that face food loss aren’t wasting nearly as much food as the rest of us.

Food Is Wasted in the Least Vulnerable Places 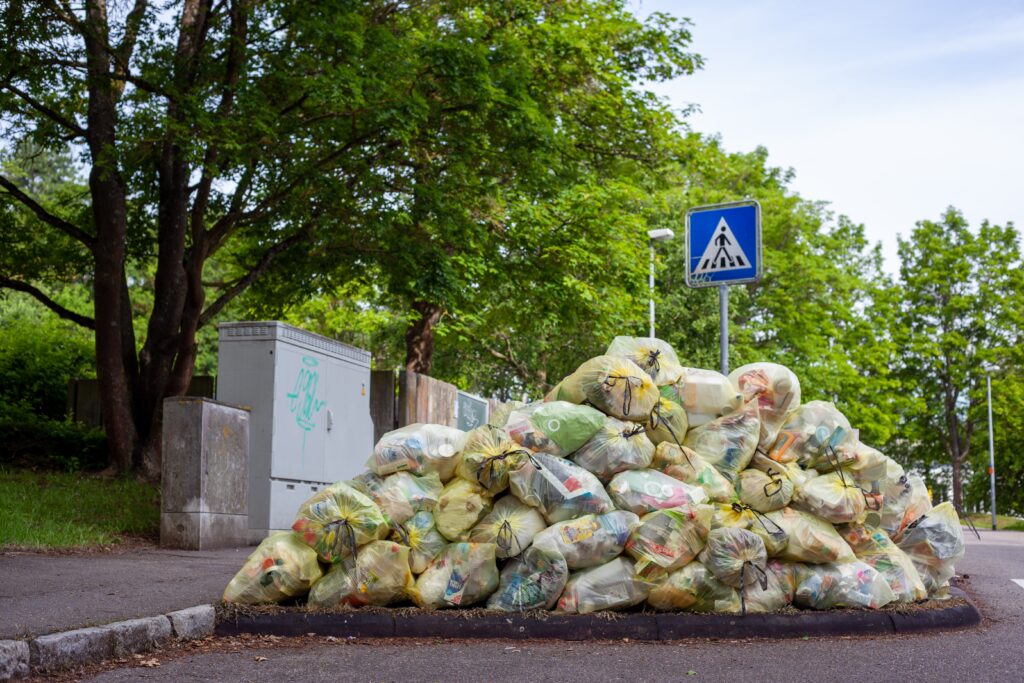 The average American throws away 20 pounds of edible food every month.

If you live in the United States or another high-income country, you likely witness food waste every single day. Because food here is relatively abundant and inexpensive, most is wasted at the consumer level after it travels from where it’s grown to the place it’s purchased. Think pizza crusts, leftovers and wilted greens. But food waste in high-income countries can also happen at the producer lever. For example, misshapen or surplus produce that gets thrown out by farms isn’t considered food loss just because it’s pre-consumer. It’s classified as waste too because it’s discarded while it’s still perfectly edible.

Suppliers often reject “imperfect” foods like bruised bananas, lumpy apples or tiny fish filets. Supermarkets, restaurants and catering companies can’t perfectly estimate how much they’ll sell every week, so good food ends up in the dumpster. As individuals, we often buy more than we need, get full and toss out bits of our dinner, let produce rot in the back of our fridge, forget our leftovers at a restaurant or throw food away prematurely because we misunderstand best-by/sell-by dates.

All this waste adds up: Consumers in rich countries waste almost as much food as the entire net food production of sub-Saharan Africa every year. If wasted food were a country, it would be the third-largest producer of carbon dioxide in the world, after the US and China.

It’s a cruel irony: In high-income countries, we willingly waste 1/3 of all of our edible food. Meanwhile, severely hungry people in low-income countries lose 40% of the food they grow due to forces beyond their control.

What is WFP doing to help?

Cutting global food waste in half by 2030 is one of the U.N.’s top priorities. In fact, it’s one of the organization’s 17 sustainable development goals. That’s why we’re working directly with farmers to combat food loss. Our Zero Post-Harvest Losses project helps farmers learn new growth, harvest and storage skills and helps them access markets to sell their crops efficiently. Through the project, we provide family farmers with air-tight storage containers that eliminate pests and mold, cutting their food loss from a whopping 40% to 2%. And in the Democratic Republic of Congo, for example, we provide cargo bikes to (mostly) women farmers to ease their access to markets.

We’re also fighting food waste by buying locally. Our Home Grown School Meals program uses locally-grown crops, providing a market for farmers’ surplus produce. In fact, in 2019 we bought over $37 million dollars’ worth of food from small-scale farmers, providing them with a vital source of income.

I’m just one person. What can I do?

Each of us can play a part in reducing food waste, not only for the sake of the food but for the resources it requires. Get involved in our #StopTheWaste movement here. Donate to help us send more air-tight containers to struggling farmers. Start a fundraiser. Become a Zero Hunger Champion. Play FreeRice or download the ShareTheMeal app.

By working to reduce both loss and waste, we can ensure that the hungriest, most vulnerable people among us have the food they need to survive and thrive.

Check out our Food Loss hub for more details, and donate here to help us fight food loss head on. And, for an easy guide on the difference between loss and waste, use our infographic: 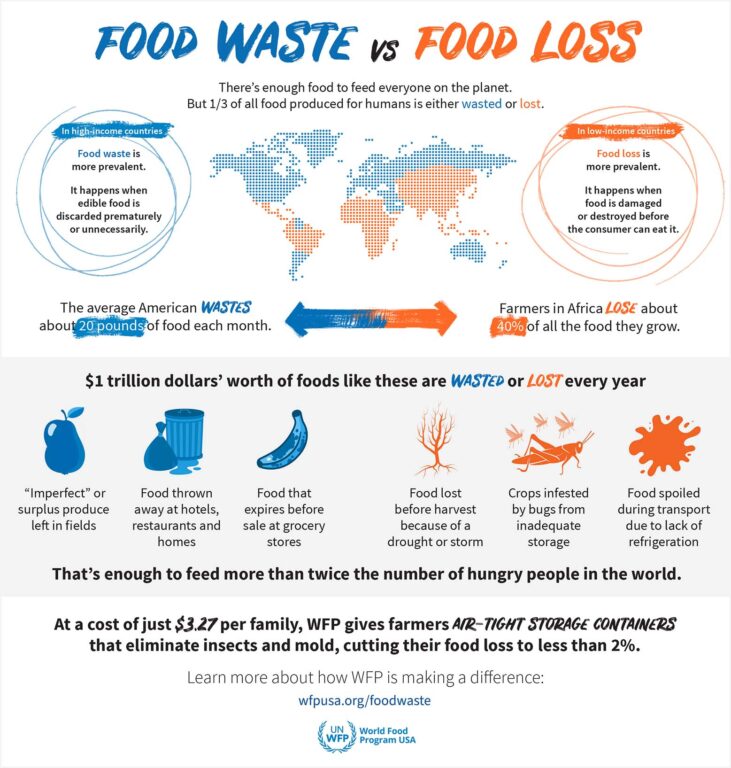 PS: The Food and Agriculture Organization of the United Nations (FAO) created an eye-opening database of what food is being lost and wasted, and where. You can check it out here, and find out how many tangerines and clementines were lost in Nepal in storage in 2011.